All bikes in all bus lanes, let’s make it happen 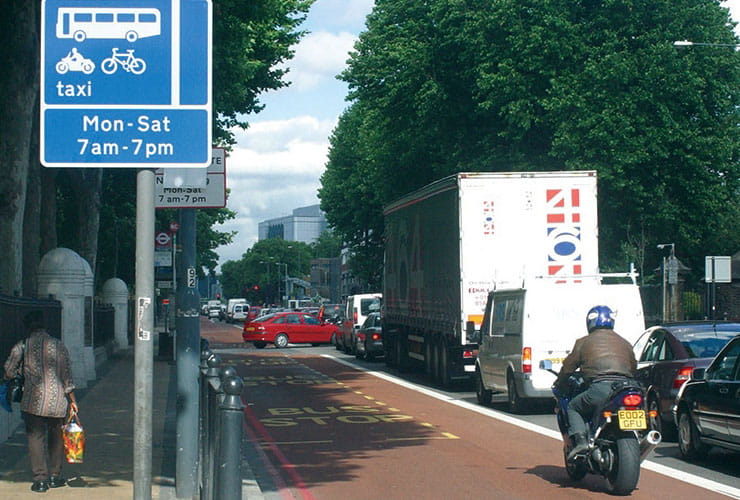 Imagine if there was a simple way to make motorcycling more appealing to more people, made it even easier and quicker to get about on two wheels and with even less risk? How many more drivers (and cyclists) would take to a motorbike or scooter for their daily commute? What if all the infrastructure already existed allowing this enormous benefit to everyone with no additional costs? Should we mention here the study done ten years ago that showed how just a ten per cent increase in motorcycle use in cities could reduce congestion by 40 per cent? So how come this simple step to open up biking to more people, reduce congestion and make motorcycling safer hasn’t happened? Nope, we don’t understand it either.

This magical answer is bus lanes. Our cities are full of them and if you’ve been on a bus recently, you’ll know how effective they are. You’ll also, as a rider or driver have noticed how underused they are while squeezing the road space for other vehicles. The space we riders used to have for filtering and helping the progress of other vehicles has been trashed by bus lanes.

Motorcycle Action Group (MAG) has been campaigning to allow access for motorcycles in bus lanes for three decades, arguing that bikes in bus lanes not only reduce congestion but also, separate riders from the other vehicles most likely to cause them harm. MAG has had some success – just under 50 per cent of UK bus lane miles allow motorcycle access.

But the access is haphazard and inconsistent. It’s not unusual for bikes to be allowed in some bus lanes, only for that to change as you cross into a different borough. In London, for example, the routes operated by Transport for London all allow motorcycle access, but most of those operated by individual boroughs away from inner London (Hackney, Islington, Camden, Greenwich etc) don’t. And so, as a rider you have to know when you cross boundaries and be looking out for the not-always-obvious blue signs while also scanning for all the other hazards of riding in London. Being able to just use all bus lanes on a bike would make things much simpler. I can’t imagine a scenario where a motorcycle would hold up the progress of a bus, plus it’s relatively easy for a bike to nip back into the edge of the main vehicle lane to pass a stationary bus at a stop.

So, what stops the 103 (out of 159) local authorities in the UK that don’t allow motorcycle access to their bus lanes seeing the benefits?

MAG’s Colin Brown explains that the way these authorities are structured means they don’t feel able to allow it without conducting a trial and trials are expensive – often costing several hundred thousand pounds.

But that’s just daft, surely. When 48% of available bus lanes are now in use by riders because other authorities have done the trials, made the decision and have many years of data to show the lack of impact on accident rates, is there any real benefit in one more authority doing one more trial? Commuting and the associated risks are surely the same regardless of whether you’re in Birmingham or Brighton? MAG (and BikeSocial) think it is time to act.

And here’s where you can help.

There’s a petition launched by a motorcycle-riding lawyer that you can access here asking that motorcycles should be given access to all the UK’s bus lanes. If it reaches 10,000 signatures the Government will respond, if that number gets to 100,000 signatures, it may get debated in parliament. More importantly though a successful petition will help MAG get a meeting with the Minister and act as leverage to push Baroness Vere on the fact that she promised to look into this and has so far done nothing.

Those of us who work in biking know that Government has a problem with motorcycling in the UK. They, like many other non-riders can’t see past the headline statistics and an inbuilt prejudice that riders are a menace to themselves and society.

Tony Campbell the boss of the Motorcycle Industry Association explains that every time he tries to sell motorcycling as part of a unified transport strategy, the first reply from Government is ‘Sort out your accident rates and then we can talk.’

But bikes in bus lanes is a perfect example of something that local authorities can sort out for us that will bring massive benefits to other road users, help reduce air pollution and reduce accidents too. All this at No. Additional. Cost.

You can make a difference by signing the petition or joining MAG for more information on the background to this, MAG have produced a short-but-useful video that explains the issues.