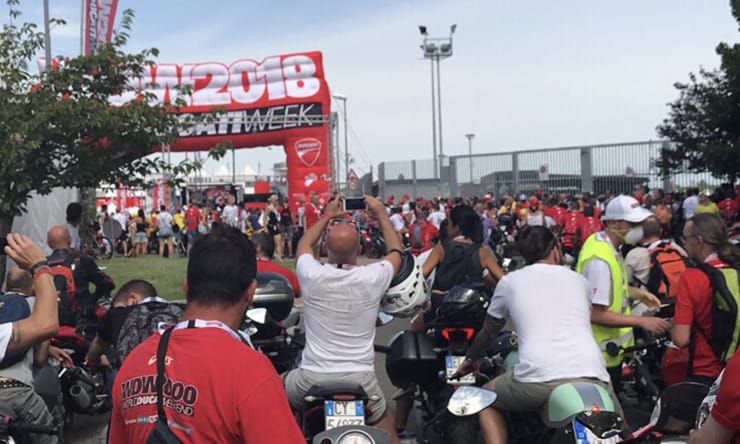 ‘Forza Ducati, grazie mille’, came the shout from my left. Roughly translated to ‘Power Ducati, thank you so much’. As I trundle into Rimini as part of the 2000 strong motorcycle rideout, at the end of day one of the biggest festival of all things Ducati: World Ducati Week. I’m expecting to see a middle-aged bloke in a Ducati t-shirt shouting his appreciation to me. I was fairly shocked to see a women in her mid to late 70s jumping up and down with wild glee in her eyes waving her cardigan above her head!

It’s not just love from the octogenarians of the Adriatic coast we see. Whole families have come out to sit on their garden walls, eating ciabattas and cheese with wine and beer flowing. At every crossroads along the way the crowds have gathered and act like an improvised road block, cheering on the riders and gesturing to us to rev our bikes or beep our horns. Children are held aloft by parents to high-five those riding past and there isn’t an ear-defender in sight. It’s almost like the act of shielding their child’s ears from the 999SPS in front of me on open pipes would somehow rob their child of some of the excitement of the moment. 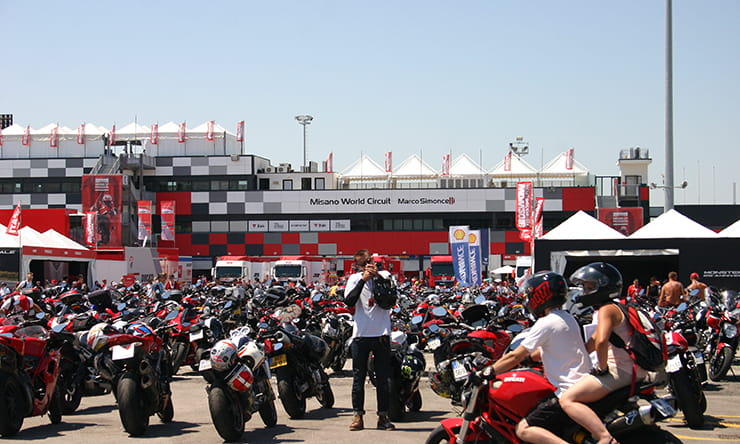 In the small resort of Richonne a burnout at the top of the sea-front road raises nothing more than a smirk and a round of applause from the assembled Caribineri - Italian police. After about 15 seconds, the acrid smoke hangs in the air and the t-shirt and short clad rider ends his impromptu show with a rolling burnout. The cheers from the crowd seem to spread through the pack of riders like a virus and all you can see are overexcited twentysomethings desperately trying to ‘hoik’ the front end of their bike off the road to extend the applause.

Now, you may be reading this and thinking that this is an exercise in excess, tyre wrecking and tarmac destruction, and in a way it is but it’s also more than that. This is a nation showing its appreciation for what is a national institution. Ducati aren’t just a motorcycle manufacturer, they’re not even a brand any more, they're bigger than that. Ducati is about as Italian as Prosecco and pizza and are held in the same regard as the national football team or Ferrari. 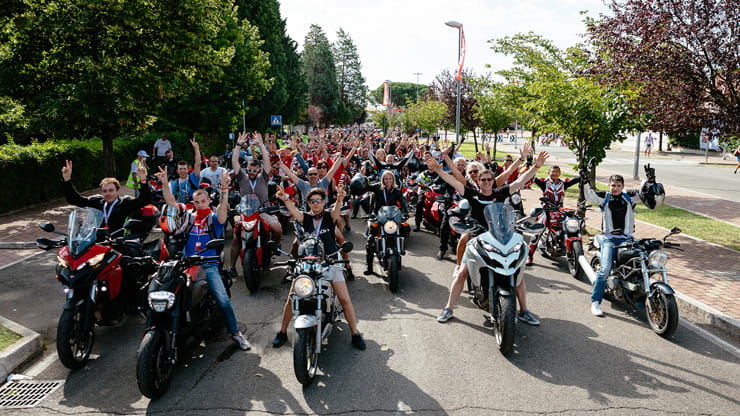 The reason I mention it is because this isn’t normal. You don’t see this in the UK when Triumph organises a ride out from the factory. I’m sure the Norton factory doesn’t have OAP fans trying to scale the gates for a glimpse of Stuart Garner when the company has an open day. So why is Ducati so different?

You could put some of it down to the Italian flair and passion for all things red. It could be that the Ducati brand has been around for generations and for most Ducatisiti, their first memory of motorcycles is an air-cooled, L-twin, complete with Desmo’ valve tappet-sound and dry clutch rattle.

For me it’s because the Ducati brand has working class roots, making radios before and throughout the war, dodging bombing raids and bankruptcy to become one of the most revered motorcycle manufacturers of the modern age. Ducati is also a company that hasn’t lost sight of its past and still feels like a family business, despite being owned by mega-brand Audi and turning over £731m last year. Regardless, the success they still have a whiff of the underdog about them, I like that.

Ducati are also stronger than they’ve ever been. Their MotoGP teams are snapping at the heels of the establishment and starting to again look like the championship winning team the nation longs for. The sales figures of the superbikes from Bologna also seem to be doing well, with the hype from the new V4 surely to bolster this.

Whatever it is that fires the passion for the boys and girls from Borgo Panigale, I was privileged to be a part of it, even if it was only for three days. Roll on the next one.