Why the Watford Dakar Rally is the future 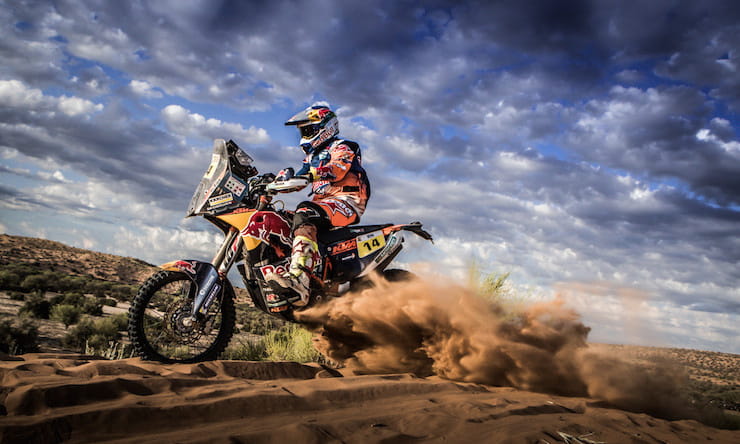 Imagine if drag racing got ambitious. Instead of stopping at the quarter mile mark they decided to carry on to the end of the field. Or maybe the edge of the county. Or how about the next county, or country? Let’s make drag racing an endurance event taking in fields, canyons, mountains and maybe a desert or two. It’s an idea so crazy that you’d probably have to be French to make it happen.

I always watch a few stages of the Dakar Rally, convincing myself that this will be the year I become as excited by this stupendous feat of talent, lunacy, determination and bravado as I know I ought to be.

But when you boil it down to basics the Dakar is just a drag race. The longest, gnarliest, most gruelling drag race that happens to go through the equivalent of many hedgerows, forests and deserts. And there is one thing about the Dakar Rally that I love; all the different classes - trucks, bikes, cars and buggies race together at the same time. Imagine how exciting mainstream motorsport would be if we combined F1, MotoGP, Touring Cars and Endurance racing so everybody raced on the same track, at the same time. There’d be a lot more overtaking for one thing, it’d be more like the world championship of getting home from work on the Watford Ring Road. And it might give a chance for riders like me, who are much better at negotiating rush hour through Doncaster than the Craner Curves at Donington to win a championship or two. 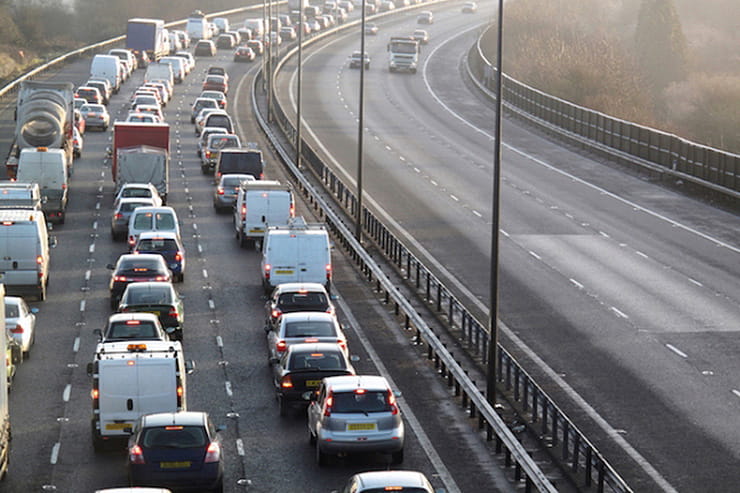 I was thinking of this the other day as my inner geek did the fuel consumption calculations riding an underpowered, overweight motorcycle into a 50mph headwind. One of the advantages of doing exactly the same very long journey every day – if you happen to be a motorcycle road tester – is the opportunity to answer the tap-room questions about what bikes really do go faster over an actual repeatable distance etc.

That’s not the same as which one will go faster at a test track, this test is much more subtle.

What makes the difference in this (and the Dakar too, I now presume) is not just how fast will it go flat out because you never get flat out on the Watford Ring Road in rush hour (or pretty much any road at any time if we’re being honest). What becomes important is how flexible the engine is when overtaking after you’ve lazily slipped into top gear. Or how slick the gearshift is. Or how narrow the bike is compared to the ever-decreasing gap ahead. Or how high, low or wide the handlebars are and will they be low enough to fit below a van mirror, high enough to avoid the saloon cars, but not so tall that they high-five a 4x4?

How subtle can the brakes be when you just need to lose 1.8mph or 30mph…NOW? Is there enough windblast from the screen to stop your visor misting, but not so much plastic you can’t see over it when it gets filthy?

All these things matter…probably. But the most surprising thing of all is, despite all the massive differences between the last six bikes I’ve ridden on this particular 153-mile route, the actual time taken and average speeds are remarkably similar. Because, just like MotoGP or any kind of motorcycle riding it turns out that it’s the rider that makes the biggest difference. 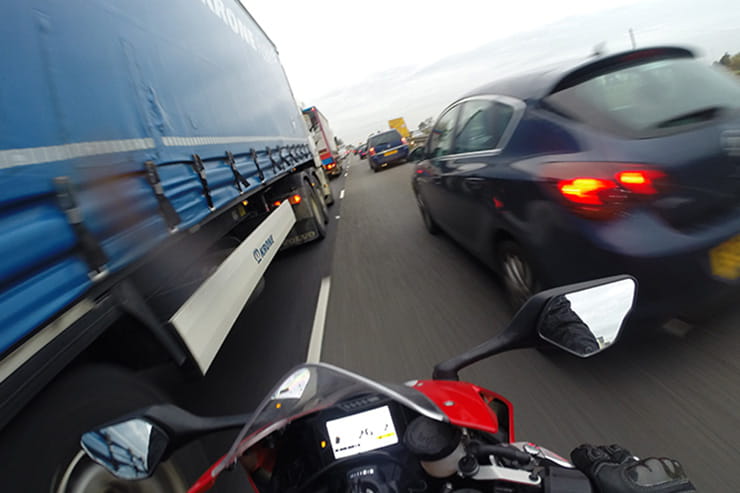 The bikes involved in this involuntary experiment include a Suzuki V-Strom 250 and V-Strom 650, Honda CBR500R and X-ADV scooter, Yamaha Fazer 1000 and FJR1300 and Kawasaki Versys 1000.

What was more interesting was that most of those journeys were very different. On the bigger, faster bikes it was all high-speed, hanging onto the back of the car-in-front’s tail -lights. Slow down till they pull over, speed up and repeat for 153 frustrating miles. On the slower bikes it was more about sticking to 70mph, mostly in the inside or middle lane. Less overtaking but more consistent speed. The Fazer 1000 is so narrow it can filter between two supermodels spooning. The FJR1300 feels much wider than it actually is, while the Versys 1000 has such a smooth ride and power delivery that you glide along, completely unaware of how fast you are going.

Honda’s CBR500R was the best compromise of cheeky fun, lithe dimensions and comfort too. The X-ADV is so wanting-to-be-French it should read The Guardian and drive a Renault people carrier and the V-Strom 650 is probably the only bike we all actually need.

Now, for those who think ‘60mph average is puny, I could do better than that,’ can I suggest that next time you ride, measure divide your miles ridden by number of minutes taken and multiply by 60 (which gives your average speed) and then contact BikeSocial to apologise because, being able to average 60mph over 153 miles in rush hour traffic takes many years of practice and may involve some liberal interpretations of the Road Traffic Act.

The V-Strom 250 was slower but, at 51mph average was still 10mph (and almost an hour) quicker than doing the same journey by car.

I’m a geek, I find this kind of thing interesting. But not half as interesting as when you add the fuel consumption figures into the equation.

On those figures the Yamaha FJR1300 used three more litres of fuel (about £4) than Honda’s X-ADV to cover the same distance in exactly the same time. Kawasaki’s 21st century Euro 4 compliant 120bhp, fuel-injected Versys 1000 uses the same amount of fuel as an 18 year-old 130bhp Euro 1 Yamaha Fazer running old-fashioned carburettors. And Suzuki’s V-Strom 650 is probably the bike we should all actually be riding. 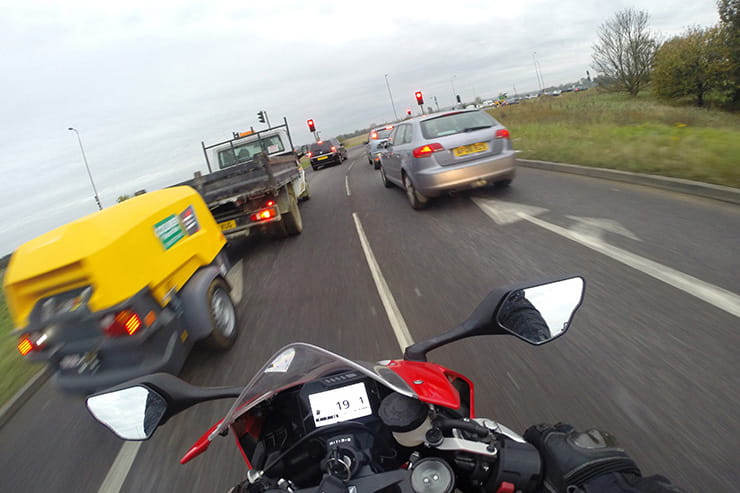 So, if you were buying on real world performance, they are all effectively the same. On Fuel consumption, the Hondas have it (although the CBR500 costs just 60 percent of the X-ADV’s list price), for smoothness and comfort the Versys or FJR1300 and for pluckiness and lowest  costs the V-Strom 250 and an ancient Fazer 1000.

I’m a road tester and, while I could tell you a hundred things that feel different on each one I couldn’t split them on real-world performance. Maybe a twistier route with a few more alpine hairpins would have made a difference, but past experience suggests otherwise (despite what your justification for buying a bigger, ‘faster’ bike might persuade you). Maybe we need a commuting world championship based on the Dakar to decide it. Each nation picks their nastiest, most clogged-up route and the car, truck and motorcycle manufacturers compete for the biggest prize of all. Imagine the kind of road bikes (and cars) a series like that would give us