Blog: Waiting For An Alibi? 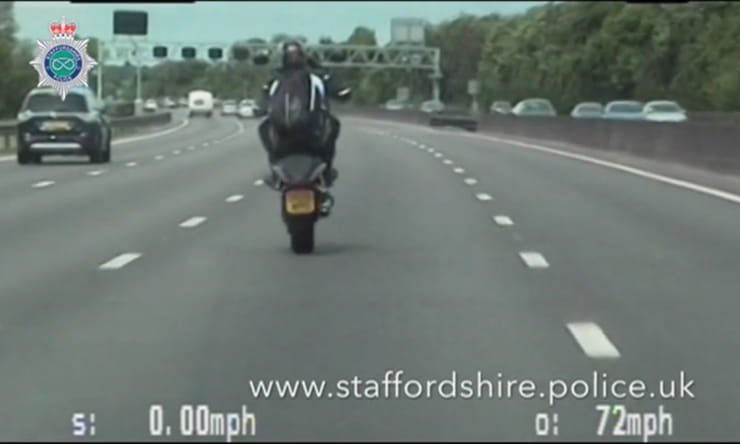 Social media addicts will have, by now, already enjoyed Staffordshire police’s video of 27 year-old Pawel Zietowski stunting his Yamaha R6 northbound along the M6 in June this year, badly. If not, it’s here: www.facebook.com/staffordshirepolice/videos/10156708964093378/

You may also already know Zietowski was convicted of dangerous driving, handed down an eight-month stretch and banned for 28 months. So that’s his life wrecked then, just like all those drivers he didn’t actually harm.

We can have several reactions to Pawel’s story, and more than one at a time. We may think, “Good, he deserved it, that was reckless and dangerous.” Fair enough, if his riding meets our standard of reckless and dangerous. We should be aware, though, it might not meet everyone’s. Rubbish and misplaced though his wheelies undoubtedly were, the most likely victims of his riding were the Yamaha’s head bearings.

Or maybe we think, “Why pull wheelies on a motorway, you fool?” In which case we again have a point – it was stupid. And while being stupid’s not an offence, it’s not much of a defence either.

Or perhaps, like me, we question the motives of the police for not stopping Zietowski after the first wheelie. What were they waiting for? A million YouTube hits?

Because they could’ve stopped him. By the power of Google Maps, we can tell Zietowski pulled his first mono exactly four miles south of junction 13 on the M6. That’s four miles to get him off at the next junction – or, given the relatively low density of traffic, the police could’ve easily and safely moved him onto the hard shoulder. They do it all the time with geese and horses.

But no! Instead, the aspiring stunt cock was nabbed just before junction 15 – more than 20 miles of wheelies, fiddling with his rucksack, weaving across his lane, a bit of casual speeding, and standing on the pegs to stretch, Kevin Schwantz-style.

Or, put another way, 20 miles of being allowed to recklessly endanger public safety (if that’s what you think he was doing, back at the start?). So imagine if he’d caused an accident in that time? It’s like the police letting a mugger punch you repeatedly in the face and only intervening once he’s retrieved a wallet from your bloodied, prostrate corpse.
I rang Staffordshire police’s media office and asked them what took the officers so long to act; they said they’d ask them and call back. They haven’t yet. They’ll probably wait until I’m approaching junction 15 on the M6.

In the meantime I contacted three retired traffic officers, and asked if they could think of a reason why the police held back for so long. All said the same: no immediately obvious reason. The only possibilities were the police car (or bike) had no blue lights and had to wait for back-up (no sign of that, and even snails have a quicker response time). Or it’s possible the police suspected the rider would bolt, so they waited for back-up to help contain the pursuit. Again, there’s nothing about the riding to suggest Pawel’s about to leg it, and again, no support appears (plus, the video stops just before the exit at junction 15).

But perhaps the most purple outrage – and can we not all agree on this? – is reserved for the disproportionate severity of Pawel’s sentence. Eight months at Her Majesty’s? Allow me to draw our attention to exhibit A: the recent case of former international footballist, Mr Wayne Mark Rooney. Rooney was found guilty of drink driving, three times over the limit – so being off his face behind the wheel wasn’t exactly a jar too many. But his punishment was a mere two-year ban and 100 hours of community service. No jail time. It’s unclear if the judge hearing Rooney’s case was a Manchester United, Everton or Dreamworks fan, but I’d like to hear the argument that says Rooney was any less likely to hurt someone than Zietowski. Unless, perhaps, it was because one of them was on two wheels.