Should you buy the Special one? 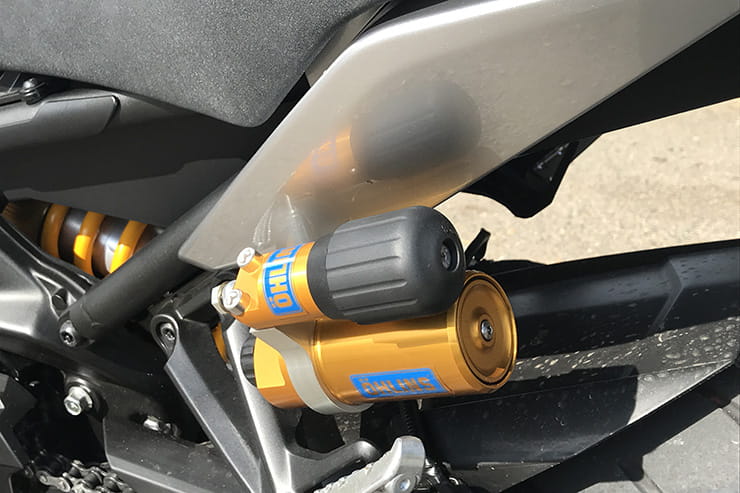 In a world where many bikes are bought on PCP, the idea of owning the sooper-dooper SP model for just a few quid-per-month more is very appealing. Most manufacturers now offer a range of versions of the same bike – especially their flagship models. The extra money might buy sportier suspension, electronic suspension, luggage, additional safety features or maybe a semi-automatic gearbox and, in theory the price of all the individual goodies is much more expensive than when bought as the SP or SE package.

In the olden days of day-glo leathers and iridium visors an SP version of a bike was generally sportier, harsher, more focussed, harder to ride and therefore, in the irrational way that biking works, much more desirable. But these days it’s not always the case. Honda’s current Fireblade SP is fast but smoother and easier to ride than the standard bike, with electronically adjusted suspension that has an effective track pre-set and a couple of road ones that turns potholes into pillows. But it’s the Yamahas that are causing some confusion. Two recent examples demonstrate this perfectly. 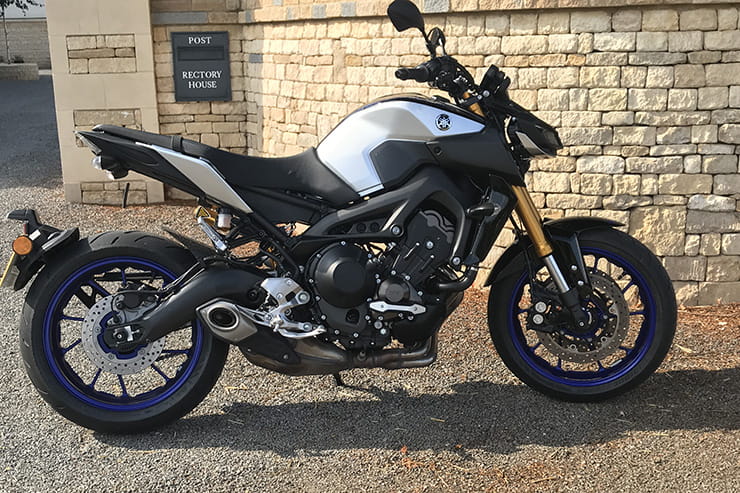 Same engine and chassis as the standard bike but with improved suspension, a clunky quickshifter and purple wheels.

Like most people I thought Yamaha’s original MT-09 was good, especially considering the price. But the sharp fuelling was a bit off-putting for some and the standard suspension lacked the ability to get you out of the trouble that the engine and attitude could get you into.

Yamaha have improved the standard bike over the last few years – softer fuelling and stiffer suspension made a big difference, and for 2018 they launched an SP version that swaps the standard bike’s budget suspension for some trick Kayaba forks and a high-spec Öhlins rear shock absorber. On the same bumpy Fenland C-roads where I remember a standard MT-09 bottoming out and crashing down to earth, the SP lets you focus on the road ahead, the line you want to take and somehow takes care of a road surface resembling the moon via nothing more complex than three springs, some oil and gas and a few carefully sized holes in a stack full of shims.

I don’t fully understand the technical differences between expensive suspension and standard mass-production stuff, but on the road it’s chalk and cheese. The SP’s suspension keeps a short, fast bike under control on the way into and out of corners, but it also gives a supple and composed ride quality on bumpy roads too, which allows it to brake later and harder into corners, settle back on its springs more predictably when you let the brakes off and then hold a line through the turn before firing out of it with the front wheel just starting to lift. 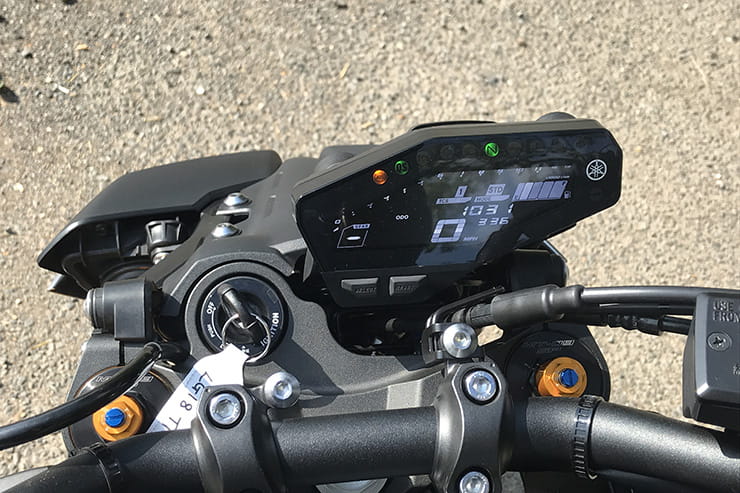 The standard settings are a little on the firm side and I did try backing the damping off a bit. You can feel the difference, but the stiffer settings work better on a wider selection of roads. Perhaps the most interesting question is whether expensive conventional suspension is still relevant when many top-spec bikes are fitted with electronically controlled semi-active units.

And this is where the other Yamaha comes in. A few months back we rode the standard MT-10 and a few months before that we’d tested the MT-10SP. The SP has a similar Öhlins electronic set-up to Honda’s ‘knife-through-butter’ Fireblade SP, but it feels completely different.

Where the standard MT is stupidly fast, but feels relatively easy to control, the SP version is exceptionally aggressive. Even when you try to ride calmly it’s like trying to bath two angry tomcats that just had their claws sharpened. All your attention is taken with simply surviving the violence on any of the selectable settings apart from ‘wet’ mode (and why would you pay that much money to ride around in ‘wet’ mode?).

It all comes down to the choice of factory pre-set settings, none of which quite work for me on the MT-10SP. You can go into the menus on the dash and adjust the settings, but it’s not as intuitive as you’d like or as simple as adjusting conventional suspension and there’s a good chance you might make it worse. 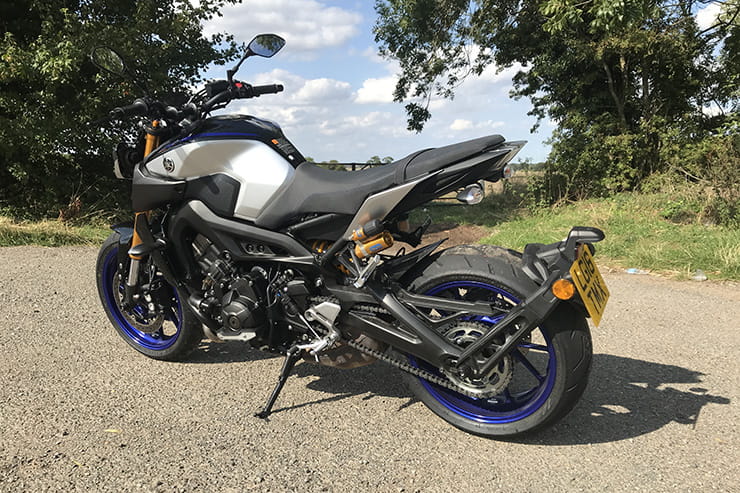 I prefer the high-class, conventional units on the MT-09SP because, having found the right setting for you the bike will then behave consistently, whereas on the electronic bikes the damping varies continually and the braking effect into one corner might not be the same as the previous one, which I find disconcerting.

Familiarity with our bike’s performance and predictability is a massive part of what gives us confidence as riders and, on the road, where conditions vary much more than on tracks, I prefer to know what my bike is going to do when I hit a bump or brake hard.

At £9199, the MT-09 SP is £800 more than the standard bike. If you bought the forks, shock absorber and quickshifter separately they’d cost a lot more than that. Although the quickshifter (works on upshifts only) is a bit clumsy for my liking and the additional cost to Yamaha of buying one set of forks instead of another is a long way short of the cost of me having to buy one set as well as the other. 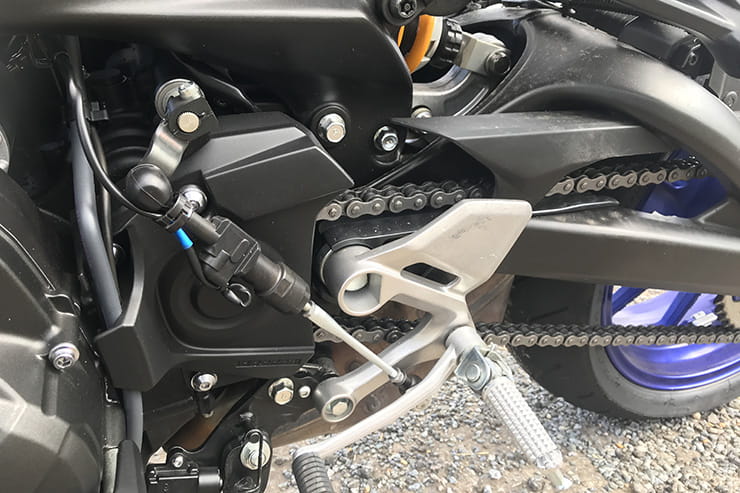 Quickshifter is good on big throttle openings, but stiff on smaller ones.

Interestingly, the MT-09SP is also £1000 cheaper than Triumph’s Street Triple RS, which, despite having almost the same up-specced items (Showa forks and an Öhlins shock) as the Yamaha is not as good on the road as the cheaper version below it because Triumph also made the engine more powerful, but revvier, more track-focused and harder to use on the road.

So, answer the question Rosie, is the SP version worth the money? In the case of the MT-09SP, yes…definitely. The SP is one of those bikes that becomes much, much more than the sum of its parts and the additional cost is well worth it. As for the others, it’s not so clear. The standard MT-10 for example, or Street Triple or Fireblade or H2SX aren’t quite as built-to-a-price as a standard MT-09 and that means the benefits with the SP/SE versions aren’t quite as dramatic. Resale values are likely to be stronger because interest will always be higher and that means the manufacturers can offer great deals on PCP if that’s your thing.