Blog: How to spot the scooter crooks 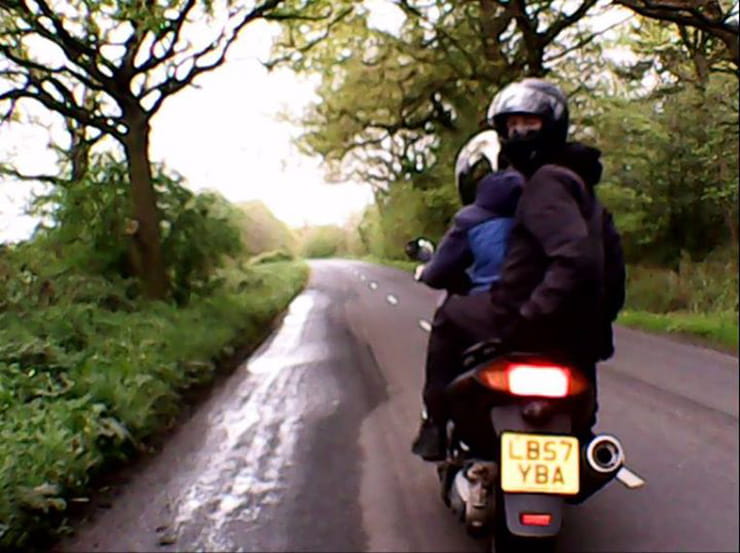 These two youths – both members of a vicious gang of armed criminals – are seen here attempting to rob a driver of his vehicle on a quiet road in the West Midlands. Caught by the victim’s camera, the machine they’re riding is a Yamaha 500cc scooter, which is both quick and powerful and, unsurprisingly, stolen.

The registration plate is genuine, albeit the number shown – LB57 YBA – is allocated to a Citröen car. It should be LD57 YBA, and looking closely at the first letter B, it can be seen that it’s a D with some insulation tape stuck over it.

Quick thinking by the local police identified the vehicle, and although the attempted robbery was aborted, sadly these two robbers escaped, despite committing crimes in the Birmingham, Dudley and Leamington Spa area for over a month on this machine, displaying these plates.

While these plates weren’t removed from the car, it’s thought that more than 250,000 sets of number plates / identities are stolen every year now in the UK, usually to deceive and confuse any witnesses or cameras that could identify a driver while committing crime, evading the congestion charge or speeding.

Many of these plate thefts will not be reported as stolen, which usually creates a great deal of time-consuming problems and grief for both the owner and the police at a later date.

There was never an 'I-Spy book of Ringers' published, but many drivers have joined the keen band of those hoping to spot a number plate with that altered letter ‘C’ that has been altered to an ‘O’, the ‘P’ that’s been made to look like an ‘R’ or the ‘3’ changed to an ‘8’ with tape or a felt-tip pen.

If you do find a ringer, tell the police and don’t have a go at dealing with it yourself. These gangs – feared worse than the Hells Angels in their peak – are not for messing with! Deaths have occurred and guns, machetes and acid has been used to effect some of these robberies.

Six youths aged between 15 and 17 who struck 14 times in less than a month, threatening motorists with knives and a firearm before making off with their vehicles, have just been sentenced in Birmingham for these violent crimes. A 15-year-old was given three years of youth custody, another 16-year-old was given two years, and three others were also given six and eight months.

However, anger of light sentences, and inaction by the authorities is rising and even Top Gear’s James May wants all bike thieves killed! Indeed, in Nigeria they are currently executing bike thieves, with several more sentenced this week to the same fate…