Opinion: Join us for a game of Markebabble bingo

As new bikes are released, journalists around the world receive press packs filled with information on every new machine. Thousands of words explaining why each bike is so much better than the one that came before. It’s fascinating stuff, and our excitement never falters when a new one arrives. The only frustration can be if it’s tempered by the fact that we’re under an embargo agreement – it’s not unknown to have to sign a £50,000 contract, agreeing that we will not publish any info ahead of an agreed date.

At launches, besides riding the bike, we’ll have technical presentations explaining what’s new in the motorcycle: how much power it makes; why the earlier peak of torque is so great, yet was so difficult to engineer with tightening legislation. But times are changing; in the old days it would be a simple; “This is new, this is special, here’s the spec, now go and ride it. And don’t crash.” Journalists were expected to digest the raw information and write it up to suit their readers.

But recently, manufacturers have started adding a score of adjectives to their facts. It’s not just ‘this brilliant engine makes its extraordinary power lower in the linear rev-range’ – the line that really struck me recently was ‘the use of authentic materials such as steel and aluminium’. What on earth is an ‘authentic’ material? No, wait, what’s not authentic? Kryptonite? Unobtanium?

At EICMA, I swear I’m not exaggerating to say that I watched two men on stage discuss their company’s new bike for twenty minutes, and in that time they told me not one fact; “I really love this bike. I love the feeling it gives me. I have ridden it and it is brilliant. It is the future.” Twenty minutes!

‘Authentic’ is proving a popular word at the moment, mostly in the custom and street bike market. I’m loath to use the word ‘hipster’, as it’s too often spat out as a derogatory term, while I believe that particular scene is fuelling a renewed passion for motorcycling. But it’s those style of bikes that see it used most in their marketing material.

It appears that every manufacturer has to have a scrambler in its range, and they all must have the ‘authentic DNA’ of their forefathers.

I know, I’m being grumpy, and it doesn’t help that I’m analytical by nature. I want the facts and I want them NOW. If the trend for markebabble means we see more excitement in those outside the core of biking, then keep it up! Many manufacturers have had fantastic success reaching a new audience, and long may that continue.

Perhaps it’s just a part of moving with the times – where smoothies have to have a personality, and crisps have to be hand-cut and laced with a chemical that gives the authentic flavour of Norfolk Sea Salt and cask-aged balsamic vinegar.

Adjectives are vital to drawing in a new crowd that doesn’t have previous experience of the product – bikes or crisps. We need more motorcyclists, so I’m the one who’s wrong – we need more adjectives, not fewer.

Let’s celebrate a new era in how motorcycles are described by their manufacturers. Join us in a game of Markebabble Bingo as you walk around Motorcycle Live, at Birmingham’s NEC between the 18th and 26 November. How many will you find? 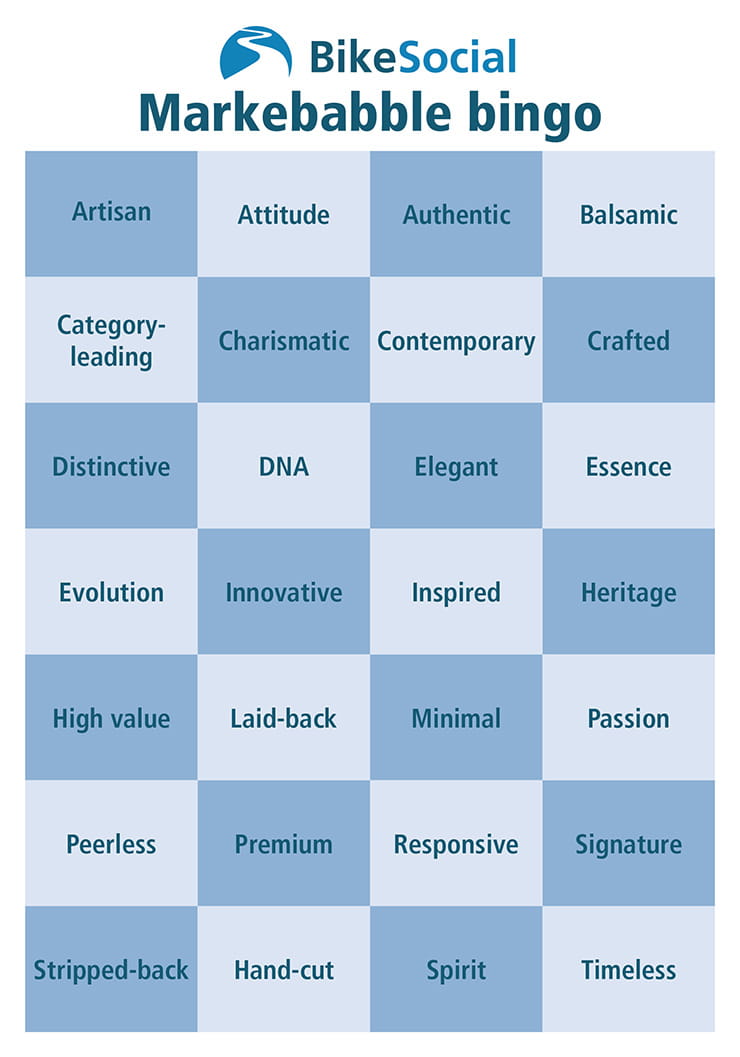