Motorcycling, our time has finally come 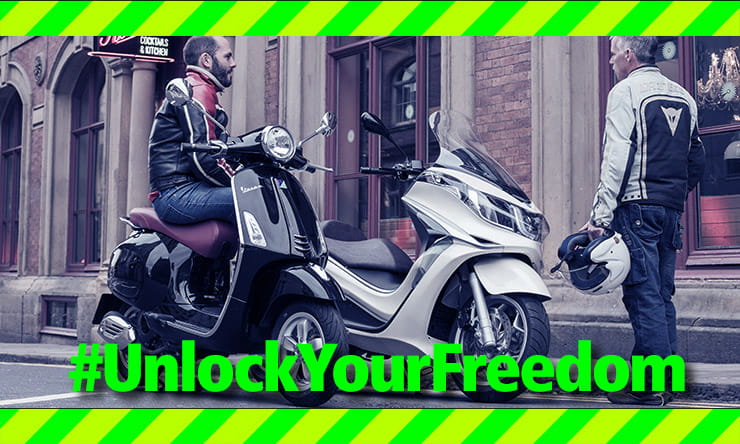 Motorcyclists rejoice, it turns out we were right all along. Government advice to nervous train commuters looking for a non-Covid-death alternative to risking-it-all on the 7.52 petri dish from anywhere, is to cycle, drive or walk. The wildcard option thrown in by Transport Secretary Grant Shapps was a discussion to legalise those ‘definitely-not-dangerous’ E-scooters that look like the kind of thing you last rode as an infant, but are strangely popular among people with flouncy hair and man-bags.

I assume the reason Mr Shapps didn’t mention motorcycling too must have been because it’s so flipping obviously the best alternative that they didn’t feel they needed to. Because none of the other options really work for actual people. It’s a long walk from Weybridge to Central London and cycling on public roads in rush hour is hot, sticky, smelly, cold, wet and dangerous – all on the same five-mile trip. Plus, you arrive at work looking like Boris-in-Lycra, grabbing a wet-wipe ‘triangular wash’ and covering all bases with the kind of deodorant dosage not seen since your teenage Lynx experiments. No thanks.

Thankfully Transport For London are trying to offset their anticipated 200 per cent increase in road traffic by putting the congestion charge up by 30 per cent too, which should at least make it easier to find a parking space when you finally arrive at 3.18pm if you go by car.

For the first time in recent history a motorcycle or scooter is the most sensible and practical solution to anyone needing to travel more than 5 miles to get to work. Cheap, efficient, flexible, safe, socially distant, cool and enjoyable too.

Just for fun the other day I did a quick tot-up of the cost savings of riding a scooter for a theoretical commuter living just outside the M25 and working in central London. Over a three-year period, the cost of buying a brand-new Honda PCX125 scooter, some decent riding kit, security, insurance, fuel and CBT would save a typical commuter around £3600 each year compared to the misery of season tickets, station parking and Underground transport using public transport. Over three years that’s a total of around £11,000 and you don’t have to get killed by Covid-19, spend three hours a day with your nose in a stranger’s armpit or get squashed by a truck on your bicycle at every left turn.

In May the MCIA, which is the body that represents the bike trade got its members (including BikeSocial and Bennetts) together and put together a campaign - Unlock Your Freedom - to push the benefits of biking. So far, it appears to be working.

Chatting to bike dealers suggests that the first few days in June have already seen enormous demand for small bikes and scooters. The MCIA’s preliminary figures suggest this might be as high as 30 per cent up year-on-year. Motorcycle training schools have long waiting lists for both CBT (which they can do now) and full licence training (which, as I write this in mid-June, they still can’t).

So why isn’t there an even bigger queue around the block to get into every bike dealer and a worldwide shortage of 125cc scooters and top boxes? I’ve sat in many focus groups about encouraging new riders that show three main reasons. Firstly, the general public is convinced that motorcycles are dangerous. A common response is ‘I’d kill myself if I rode one of those.’ Which is weird, because, as a mate of mine pointed out the other week these people have gas cookers, staircases and electric sockets in their houses, which are far more dangerous. On the half-dozen occasions I’ve spent time in A&E, it’s never been motorcycle related and I’ve never seen anyone in there with a blood-stained POLITE vest or any kind of motorcycle injury. Yes, people do fall of motorbikes, but the vast majority don’t, and the benefits so far outweigh the tiny risks that it’s a crazy argument to suggest that the potential danger is reason to not do it.

Then there’s the excuse about getting cold and wet with helmet hair and smudged make-up. People have no idea how comfortable and easy biking can be. You might have to save the manicured beehive or Stray Cat quaff for the weekend but would you really rather spend two hours waiting for a train and stick your nose in a selection of other people’s body parts while catching every disease in West London before dashing from the station to the office under a failing umbrella to arrive at your desk wetter and more disheveled, stressed and miserable than you’d ever be safely tucked up in a full cordura bike suit?

The third reason holding biking back is that many would-be commuters think it is difficult and expensive to get on two wheels. The cost and hassle of getting a full licence gets mixed up in the message and many people don’t realise they only need a CBT certificate to start riding.

The MCIA’s Unlock Your Freedom campaign is a great start, but what will really help is you, me and every other rider going out of their way to tell friends, family and workmates about the benefits of biking and how easy it is to get on a 125. For the next few months, those who bike to work are the winners. Less infected, less disheveled or squashed by a truck and smelling of assured smugness instead of B.O. and excess Lynx.

So, let’s get out there and talk to people, sell the benefits of commuting by bike, let them know how easy it is. Our part in this as advocates of riding is massively important because one of the things that always came through most in those focus groups was how many people started riding because someone on their family did it, or a mate took it up and wouldn’t shut up about it.

All those people had faced the same negative stereotyping, and all had taken the plunge. If we can get more people riding, then motorcycling has more clout in transport policy and we can press home the advantages of powered two-wheelers as the next logical step where cycling can’t deliver.

Seriously, we’ve never had an opportunity like this one. If you’ve got out of the habit of commuting by bike, then now is the time to make a hero’s return. You are an influencer, so go change the world.