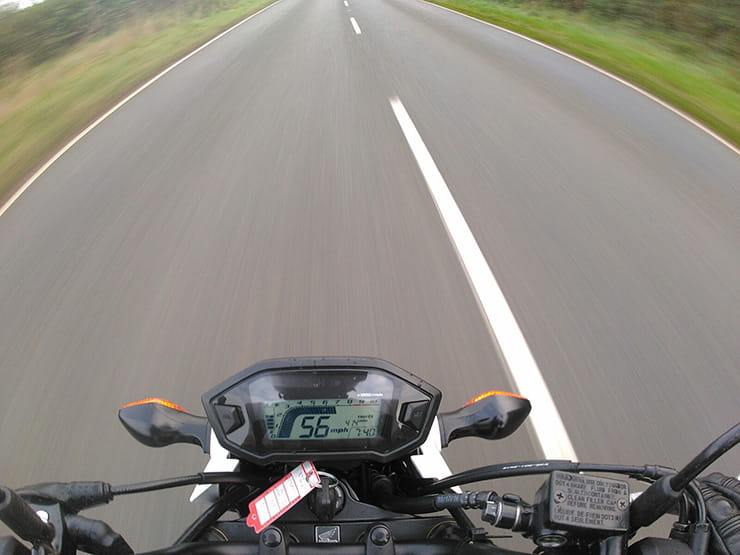 Is a bike that struggles to keep up with modern traffic the safest thing to learn on?

I’ve just got home after a 130mile round-trip on the Honda MSX125. Despite its lowly 9.7bhp, this £3,300 little single-cylinder machine – weighing a mere 101.7kg – is a huge amount of fun, even for a relatively experienced rider such as me who owns a much bigger KTM 1050 Adventure.

But I wonder if something this small is the right thing for the youngest riders to learn on.

Around town, there’s no question that this is a great little tool (and it’s got a lot more character than the average 125cc commuter), but out on the open roads, I worry that inexperienced bikers are more likely to get themselves in trouble with the machines they have access to under an A1 licence.

Of course, I don’t mean the kind of trouble we might get ourselves into with a Hayabusa or a 1299 Panigale – I’m concerned that they’ll end up in tricky situations with faster-moving traffic.

When riding any slower bike I make a real point of dominating my lane, especially on dual-carriageways. I don’t want car drivers to think they can squeeze past, pushing me into the gutter if something else appears. I’m also on higher alert for motorists that haven’t seen me as I overtake – something that takes considerably longer on a machine like this than it does on my KTM.

But these are just a couple of the thousands of pieces of useful knowledge we pick up with experience; not things we instinctively knew as biking newbies.

My biggest worry is the temptation to take a chance on a 125. When you’re following a car or truck doing 50-55mph, and your bike tops out at 60-65mph, overtakes can be interesting at best, progressively more terrifying at worst.

I overtook a lorry on the A17 coming home – it started fine, and there was plenty of space. Then he seemed to pick up speed a little. But I didn’t. I was crawling past the behemoth, gradually getting closer to a junction, scared that I was going to run out of space before someone appeared in the middle of the road to turn right.

Then there was the time (on the same journey) that I overtook a car. A 60mph limit, the car doing 50mph. The overtake was safe and clear when I started it, but not after we’d hit a slight incline and headwind, and I was hunched over the tank, flicking my vision between the car to my left, and the one approaching me ahead.

I’m not writing this through a medium, so clearly it all ended fine, and I didn’t cause the approaching car to slow or change course (I’m not sure they would have done), but it put the wind up me.

Car drivers sometimes get frustrated by smaller bikes like this, and will squeeze through a non-existent gap, confident that you’ll get out of the way. And they’re even less likely to be happy if you then filter past them as soon as you hit the city traffic.

Maybe it’s the experience of how quickly I can overtake on a big bike that makes my small-capacity overtakes less safe. It’s likely not helped by the fact that my first machine – after taking my direct access training in 1996 – was a Honda CBR600FM. Perhaps I’m trying too hard to ride a small bike like a big bike. Perhaps I’d be a better rider if I had spent my early years on something little.

But I do wonder; should new riders have access to something a bit bigger, a bit sooner? Should 300s be the starting point for those who’ve proven capable of handling one? Not enough power to really get you into sticky situations, but plenty to get you out of some. With faster vehicles around us and modern ABS, is it time for a rethink? A 17 year old who wants to get out of the city and open up their horizons can get any car they can afford to insure. But it’ll be another two years before they can have a bike that’ll be able to keep up with any of those cars.

It’s harder to get a licence now, and combined with cars being so cheap it’s no surprise that fewer youngsters are buying into the biking life. Which is a damned shame, as that means far fewer people are realising the brilliant fun, convenience and sheer pleasure that comes with motorcycling…