Petrol is a bargain when you ride a bike. Here’s how to enjoy it even more 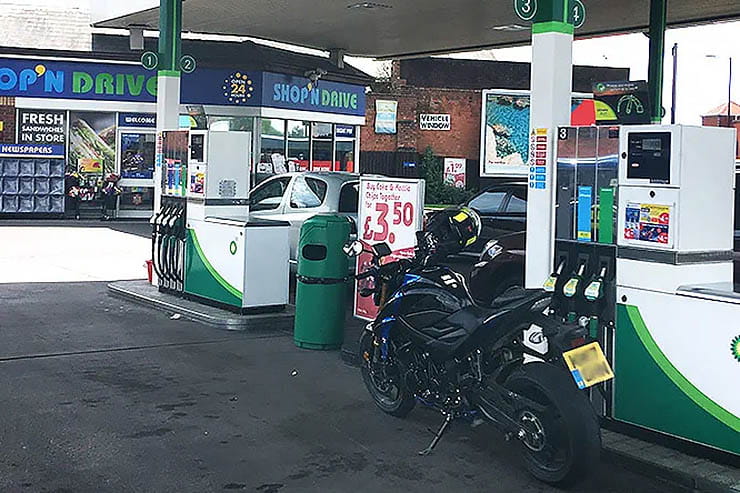 My name is Steven and I’m addicted to petrol. I just paid almost £2 for a litre of highly toxic, inflammable liquid that I can’t drink and will enable me to complete just nine per cent of my journey home. That works out at £1 a pint for regular E10. Beer (which admittedly is E100) in my local is four times as expensive, so I suppose petrol is good value compared to the cost of a boozy night out. But when your journey to work needs 11 litres of fuel each way, it might be time to think about how to make it last.

One of the benefits of doing a very long commute on a very regular basis is the geeky obsession you develop about things like average speeds and fuel consumption. In between not getting nicked by cameras, not getting squashed by drugged-up drivers (an epidemic on the M25) and not collecting van mirrors, there’s not a lot else to do on the UK motorway network than experiment with things like cruising speeds, throttle position, traffic management and gear selection.

For some people, such behaviour is so far away from biking bravado that even just mentioning it brings howls of derision. I get that – we’re blokes and we’d buy a toaster with a ‘sport’ badge on it if Argos sold one. But when the price of petrol increases by the hour, it’s handy to know how to make every single litre go as far as possible without going slower or taking more time to get home. And, as it turns out, actively riding for mpg while maintaining a target average speed is pretty entertaining. Don’t knock it till you’ve tried it.

My objective on this 157-mile mostly-motorway regular trip is to average 60mph and 60mpg no matter what I’m riding. And it still has to be enjoyable. Still worth the effort of getting kitted-up in winter clobber (which for a long-distance rider is largely the same as summer clobber) and still have me buzzing when I get home.

The list of bikes in the Steve Rose ‘super league of sipping’ below isn’t exhaustive – road testers get through a lot of machinery – but it is representative of the kind of bikes we all spend time on these days.

All the above figures were obtained while also averaging 60mph. To put some context into that number, to average 60mph for every mile you spend in a queue doing 50mph, you have to do another mile at 70mph. Every mile at 40mph requires a mile at 80mph etc. over 157 miles, that means you need to ride reasonably quickly for a lot of the time to make up for the many moments you are slowed down. And the point of this exercise isn’t to be reckless or piss-off every other road user, but equally, you can’t be on the M25 and M11 for 100 miles without having to filter…a lot.

Oh, and let’s remember before the ‘I never do less than 90’ brigade come knocking that

The Triumph 660s are unusual in having highly accurate speedos and, to this day I feel nothing but mechanical sympathy for that poor V-Strom 250, pretty much pinned to the throttle stop for over two hours.

If you’ve been doing this for as long as I have you’ll also know that while riding as fast as you dare feels great, gives an enormous buzz and makes you feel like our 90mph hero above, you don’t actually get home that much quicker. On the days when I’m late and the incentive to just go-for-it outweighs the desire to be wealthy I can shave 15 minutes at most from that 2H 17m journey time. It’ll cost me an extra tenner in fuel, and I’ll be paranoid for days when the post arrives. If I’m going to get points, I’d rather it was doing something memorable and mischievous - not simply getting home from work.

As a real-world comparison (especially to show how traffic affects average speed, here’s a couple of figures for the same journey done in cars.

So, what’s the secret to good mpg? It’s largely the same as the secret to competent riding. Look a long way ahead, manage your speed smartly and be on your own ride, getting through the traffic and once at the front of the queue resist the temptation to charge off to the back of the next one at full speed.  On motorways try not to be part of the accordion of traffic in the outside lane swapping 55 for 80mph every few miles.

Ride smoothly and keep the revs constant somewhere around the rpm where your motor makes peak torque. Peak torque is that point in the rev range where it somehow, subconsciously feels right to change up a gear – as you feel the drive just start to drop away.

Slowing down and the subsequent acceleration back to cruising speed is what uses fuel. That and the aerodynamics – swapping 80mph for 55mph every few miles needs more fuel to get up to speed and more again to overcome the added drag of middle-aged spread at 80mph rather than 70.

Labouring in the engine in top gear is false economy, as is dropping much below an indicated 70mph on the motorway because that’s the point where it stops being enjoyable.

Away from motorways you can get even more spectacular mpg figures using the same principles at lower speeds.

My conclusion from all of this – comparing 1100cc twins with 350cc scooters and 20-year-old carb-fuelled roadsters with ex-YZF-R1 engines is that modern motorcycle engines are very efficient, meaning the difference between good mpg and less-good is subtle. And that riding for economy is good for your riding skills. The experience can be every bit as rewarding, if only because the tenner you save is another tenner in the tank to spend more time enjoying your bike.

Does anyone have any questions?