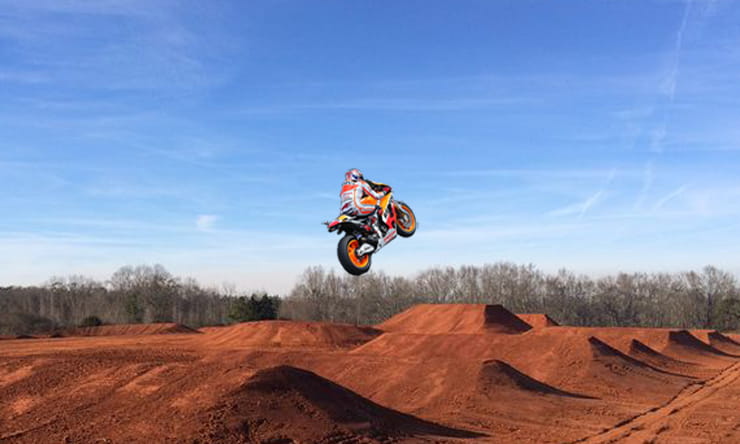 Triathlon, Decathlon, Ironman. The peak of physical endurance, mind over matter, human endeavour to succeed and be the best. Now add to that man and machine… okay you look confused – let me flesh this out a bit.

Forget race-circuit only race-series. Who wants to watch just motocross? Let’s have a championship that covers it all! There are rules, obviously, so the bike you start the season on must be the bike you end the season on. You can tune suspension internals, ECU, and tyres to suit the event but the frame, engine and suspension design must be the same you started the season with. Performance tuning to the engine is unlimited but no nitrous – that’s just being silly! Max engine size is 1000cc for 4-strokes and 500cc for two strokes. Engine and frame can be road bike or bespoke – the wackier design the better: you want hub-steering? You got it. Carbon fibre monocoque? Yes sir.

Okay the races: Laps are so passé let’s have timed races, with pit-stops if needed. If its circuit based its 30 minute races, the rider who completes the most laps in that time wins.

So that’s the challenge. Who’s in?

No seriously, I think it’s a winner. First off you have to make a bike that’s not going to excel in any one discipline, but be alright in most of them – yes I know the list leans towards off road a bit but its not the finished article, Carmelo hasn’t seen it yet so there's time to shuffle it about!

So your R1 style sportsbike is gonna blast everything into the hedges at the Northwest and Spa, you might even be able to tune it to be fairly good at Lyden Hill with some off road style tyres and jack up the suspension a bit. But leaping up a stream in Spain while trying not to put a foot down? Not so hot. Africa Twins a solid bet but again it’s the trials, it’s too heavy! KTM Freeride 250F is going to be awesome at most of this, but it’ll struggle to get round Mugello in a sub three-minute time.

And then there is the rider. Everyone says that Marquez is the bomb on everything with two wheels but is he? Well, stupid question yeah he is. Okay so who’s your dream team? Marquez would smash it let’s be honest. Lorenzo…he’s slippery when wet and some of this takes place in the UK so that's a no. Foggy! I know, Dirtquake ended in an ambulance but come on, he was loving it and quick and he’s mad enough to do anything – look at that Super-X-Factor-Jungle thingy he went on… he won that too! Sam Sunderland would be good, I bet he can hustle a bike round Mugello faster than most of the track-day fast group.

So there we have it, World Superbike needs to become World Decathlo-bike. Ten events, nine disciplines designed to find the best, the fastest, the toughest and most talented rider on the planet. If any of you lovely people know a Mr C. Ezpeleta, go and give him a tap on the shoulder. Tell him that BikeSocial are on hand and that everything is going to be just fine.