Blog: How the whiplash backlash could cost you £1000s 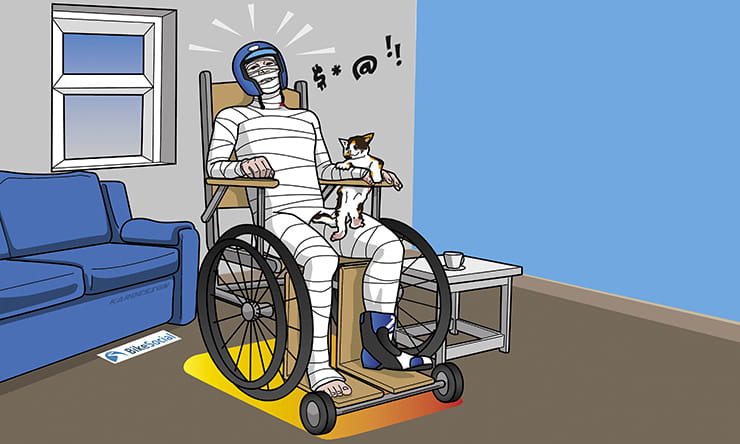 A few years back I was on the receiving end of a dodgy whiplash claim. It was a depressing experience. The incident was the teeniest bump between my car and the one in front. There was no visible damage to either vehicle and we both agreed at the scene that there was no need for further action. We didn’t even exchange details.

So I was shocked a few weeks later to receive a letter from a solicitor based 250 miles away explaining how his client was suffering extreme pain and torment as a result of my atrocious driving. He then listed half a dozen things wrong with my driving from going too fast to being inattentive to virtually accusing me of dangerous driving in order to cement their case.

According to their doctor’s report (from a quack also based 250 miles from where the ‘victim’ lived), their client was so badly injured that she was unable to look after her garden anymore and was going to have to employ someone to come in at a cost of (wait for it) £6 per week for at least the next five years, resulting in a claim of £1500 plus their fees.

It was so clearly a scam that I wrote back to them and told them to shove it up their legal chambers. But my insurer told me to shut up and allow them to pay up. I was livid and haven’t done business with that insurer since.

Dodgy whiplash claims have been the bane of the insurance business for a while and one, unnecessary reason that premiums have gone up. Insurers wanted action, but only the Government can actually change the law. Last year Parliament finally decided to act and proposed plans to universally raise the claims limit in Small Claims Court from £1000 to £5000.

This will eliminate the whiplash problem because normally when you take someone to court and win the losing partner has to pay fees. Small claims legislation simplifies the claiming process with a clause meaning winning parties cannot claim legal fees from the loser. In practice this means small claims are made with neither side taking legal representation.

So, raising the limit means a solicitor won’t take on a case where the payout will be £5000 or less because, even if they win they can no longer recover their costs from the losing party. And because most whiplash claims are for less than £5000, the ambulance-chasing lawyers will no longer be able to profit from them.

Or not. Because by raising that smalls claims limit universally the Government is opening up a whole can of problematic worms for those of us known as Vulnerable Road Users (VRU). The most common VRUs are cyclists, pedestrians, motorcyclists and horse riders and every year there are many thousands of accidents involving us as victims, requiring time off work, medical expenses and a whole host of other things (though not usually gardening assistance).

In the majority of cases these expenses come to more than £1000 but less than £5000 and so, under the new regulations, designed to stamp out fraudulent whiplash claims, thousands of innocent VRU victims will end up being penalised because their lawyers can no longer claim fees from the losing side. Which, in reality means they won’t take on the case.

Legal protection insurance won’t cover this either because this policy is there to cover your legal costs should you go to court and lose, not when you win (because historically, those costs were paid by the losing side).

So if you get knocked off your bike and the driver admits responsibility, but their insurers make a derisory offer of compensation, you won’t be able to get legal representation to fight it because, even if you win, your legal costs would have to come from your payout, not the opposing side and if you lose you’ll be even further out of pocket. It’s a disaster in waiting for VRUs and the parliamentary bill is on its way through the system right now.

To counter the bill, MPs are being asked to sign an Early Day Parliamentary Motion calling on the government to remove VRUs from the measures set out in the proposed reforms. The Motion, tabled by Catherine West, MP for Hornsey and Wood Green, argues that pedestrians, cyclists, motorcyclists and horseriders should not be swept up by measures that are designed to curb whiplash claims.

What will really help their cause is if you, me and all our walking, cycling and horsing friends and family members get on the backs of our own MPs and make them aware of the potential problems if VRUs aren’t exempted.

Click this link for a copy of a pre-written letter, fill in the blanks and either post it or email it to your MP and as many others as you can find.

Swamp lawyers will still find ways to make money, of course, whether it’s PPI, accidents at work or whatever they dream up next. We can’t stop that, but we can stop their greed preventing innocent motorcyclists, cyclists and others being denied justice and proper compensation when some dork peeling a banana while texting at the wheel destroys your bike, busts your leg and wrecks your summer.

The Bill is due to get its second reading in the House of Lords on April 24th, so we haven’t got long.