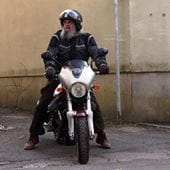 Frank Westworth has been riding ratty old bikes for so long that when he started writing about them he was the enfant terrible of the newly classic motorcycling world. These days he’s forgotten most of what he once knew about classic British bikes, due to the appalling consequences of riding modern Harley-Davidsons…

Frank Westworth has been riding ratty old bikes for so long that when he started writing about them he was the enfant terrible of the newly classic motorcycling world. These days he’s forgotten most of what he once knew about classic British bikes, due to the appalling consequences of riding modern Harley-Davidsons… 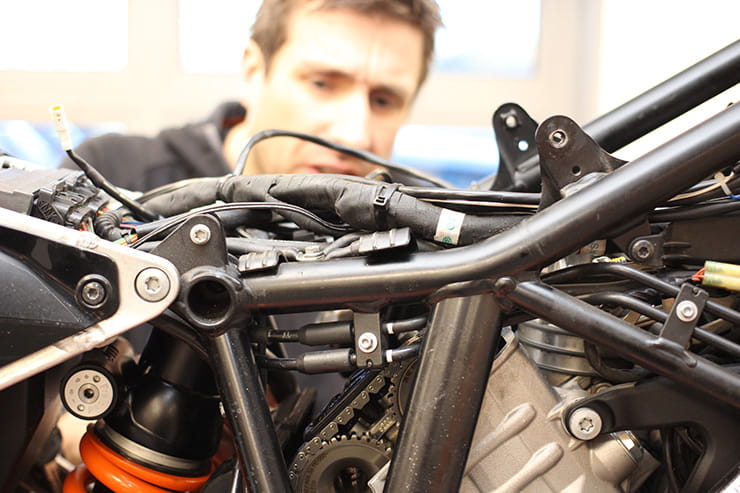 If there’s one thing that makes the world go around, it’s wheels. Lots of them, and as many new ones as possible please. It might be right-on and environmentally aware to clutter up the potholed superhighways aboard ancient motorbicycles built halfway through the last century, but that doesn’t help the global bike trade much. Unlike buying new bikes, which does. And no, I’m not on commission.

Armed with the profound understanding that the future of biking depends on me buying a new bike, I did exactly that. It was an almost entirely pain-free experience, moving a large amount of digital dosh, sweetly disguised as numbers on a PC screen, from one account to another. The dealer experience was entertaining and amusing, not least because the staff rider they sent out with me to make sure I didn’t ride away aboard sixteen grands-worth of their motorcycle was awesomely rapid. On a vast fully-faired, be-bagged cruiser monster complete with stereo that’ll liquidise zombies and a satnav (although why the latter I have no idea – he plainly knew where we were going) we had one of those rides when all you can think is ‘If he can get that vast tank around these bends at that speed then this relatively sporty machine weighing half what his does should do it too. I’ll just grit my eyes and close my teeth and…’

We returned, punched fists and giggled like children outside the showroom before I went back inside and struck a dim (read ‘expensive’) deal. Hurrah for me and the future of motorbicycling.

The first service at 1000 miles took a little while to accomplish, so I borrowed another bike while their team of crack specialists did mysterious things. As I was offered a choice, I decided on a new example of the vast touring bolide which I’d failed to follow on that test ride a couple of months back. Loved that, too, but hey, the price! And hey again, the first new bike was whizzo, as we said while reading The Beano in 1963, or something, so it would have been an additional purchase, which is entirely uncheap and unsensible.

Email is a terrible thing. An email from Super-Salesman Joe (his real name, I think) landed a month or so later. ‘Hey dude,’ he may have said, and he proceeded to reveal that the jolly green machine I’d recently graced with my aristocratic backside was coming off the test fleet and, how does £n sound, where n is large but a lot smaller than the full N of a month back. Oh wow, said I. The Better Third laughed as I pretended a justification for a second new machine and… you know what comes next.

And it was great. What a tool. The perfect companion for the original monster, and with a smidge of weather protection and great big bags. Also matt green. Just like a Sherman tank, which it resembles in many unusual and interesting ways.

With me so far? Good, smile, because in mid-December last year, four months after collecting the dream machine (Mk2) I received a letter from the UK importer of that fine American machine which advised me of a safety recall. Not a problem, surely, because the suspect component was part of the clutch, part of the hydraulics, so what could be the drama here? Because while riding without a clutch isn’t everyone’s idea of a dream date, it’s perfectly possible, as a million years spent riding ancient Brits has revealed … more than a few times, ancient cables being what they are. So? The drama? The grit in the Vaseline? It’s a safety recall. You cannot ride your motorcycle if it’s subject to a safety recall.

Says who? We’re bikers, we sneer at repression.

Says your insurance company, who won’t cover you, and says the law, who will be very unhappy if you, say, run over that child who ran into the street and you failed to stop because… you get the idea.

But not a problem. The clutch hydraulics are made by Brembo, of whom you may have heard, not least because they appear to supply jolly fine hydraulics and brakes and the like for an ever-increasing number of manufacturers. Hurrah. There’ll be a delay, said my dealer, gratifyingly shamefaced and apologetic. But adamant. OK, said I. Who rides much in the deep midwinter anyway? And anyway again, I have another bike…

It’s now heading towards summer. The sun is shining and the roads inviting. The parts to fix my bike aren’t in the country yet, never mind in my clutch. I become distressed and depressed, also irritated. What, I ask, can the reason be? There are 238,000 motorcycles affected by the recall, I’m told. 238,000. That’s a lot. That’s the reason. My parts will arrive in May, no doubt along with free beer and an end to global poverty or warming, whichever you prefer.

Consumer protection, I decide. They can take the bike back and give me either the dosh or another one just like the other one. Except… the Consumer Rights Act, which replaced the old Sale of Goods Act, reveals that if the recall / failure / insert your own disaster here happened more than 30 days after purchase it’s between you – that is, me – and the supplier. And they may not want to give me megadosh for a bike they can’t sell. Which is understandable, if displeasing.

Hear that screaming sound? That’s the sound of patience running out. But is there actually anything I can do to force the issue? The law and the importer both reveal that it’s between me and the dealer, who have in fact done nothing wrong because they cannot somehow magic Brembo into sending me some clutch bits.