Harley Davidson’s Livewire is the most significant new motorcycle for a decade. How long before the other manufacturers join in? 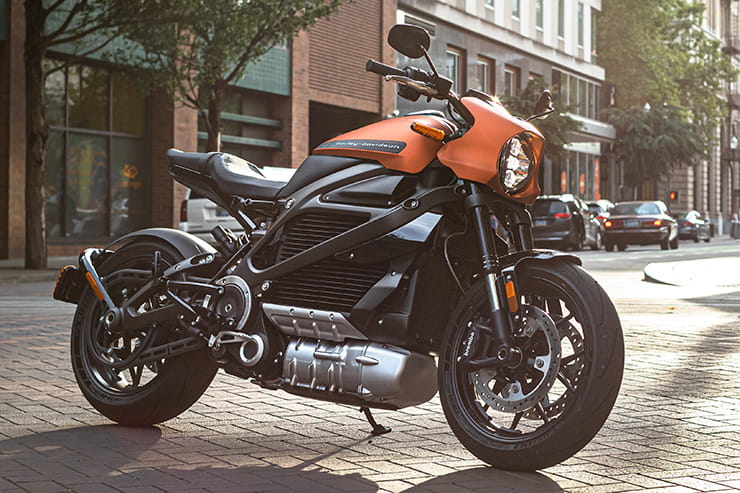 Watching the reports come back from the launch of Harley’s electric Livewire has been interesting. Press launch riding is frantic and the photoshoot requirements (ride round corner, stop, turn around, accelerate hard round corner, stop…repeat eleven times) use a lot of juice. HD couldn’t afford for anyone to get stranded with a dead bike and so the test route was just 66 miles. Because of that most of the headlines were about range, rather than the performance, which by all accounts was surprisingly good.

Harley have proved bravest of the mainstream manufacturers in sticking their head above the electric parapet and actually launching an electric bike that you can buy in a proper motorcycle dealership with proper back-up, that doesn’t look like a souped-up Chinese 250 with an extra zero on the price tag.

The initial reports suggest that the Livewire is quick off the line, like most electric bikes, easy to ride and enjoyable too. But it costs £29k and ridden like you do on a press launch, gets around 80 miles from a full charge.

To put that in perspective, when Honda launched the 2002 ST1300 Pan European, they made much of the 300-mile tank range from the enormous 28 litre fuel tank. And on the road in normal use you could easily get 250 miles from it. But on the press launch, we were running out at 170 miles because press launches aren’t like normal rides.

So let’s assume that the Livewire will typically do around 100 miles to a charge when ridden like most of us do on a Sunday blast. That’s still not great, but before we get too critical, let’s remember that this is a first-generation mass-production electric motorcycle that has to compete with tenth generation petrol vehicles in a world where a litre of unleaded costs £1.30. Try and imagine a world in ten years' time where a fifth-generation electric bike is competing against a petrol motorcycle, heavily restricted to meet Euro 10 emissions regs fuelled by petrol that now costs £10 a litre.

Think of your smartphone as a comparison. In order to get to where we are today, we had to go through four or five generations of handsets that rapidly got better as the mass market adopted them. Harley’s Livewire is a long way from the Yuppie bricks and Nokia 3310s, think of it as the Motorola Raz’R of electric motorcycles.

The perfect electric vehicle should be lightweight, small, aerodynamic and agile in order to maximise range-per-charge. Cars can be aerodynamic but all those airbags, side-impact bars, crumple zones and other Euro NCAP safety kit is heavy. Cars also spend too much time stationary in queues (requiring too much energy to get all that mass moving again only to stop ten feet down the road) and they are built to carry five people even though they spend most time with just one occupant.

Bikes don’t have crumple zones or airbags (mostly) so are much lighter. They spend more time moving and less time queuing and are only built for two people. We should be light years ahead in the electric field.

There are plenty of petrol bikes that only 100 miles on a tank of gas, such as Ducati’s V4 Panigale.  I can think of many reasons not to buy a Panigale, but none are to do with the fuel range because I can fill up at the multiple pumps of the 9000 UK filling stations, pay, piddle and be on my way in ten minutes. Doing the same on Harley’s Livewire (assuming I can find one of the 1500 fast chargers in the UK and it doesn’t have a Nissan attached to it) will take an hour.

Developing new battery technology is a slow process, but chargers are getting much more efficient all the time. A new generation of 350kw/h chargers can fizz 200 miles of range into an electric car in ten minutes. If I knew there was a vast network of fast chargers, where I wouldn’t have to wait more than 10-20 minutes to get access and ten more to charge, I’d consider electric transport because these days I rarely do 100 miles without stopping anyway.  With the current charging network it’s only the middle-class politeness of a typical electric vehicle owner that prevents full scale riots when two Nissan Leafs turn up at the only charger in town.

And bizarrely, this charging challenge might drive a resurgence in motorcycles as commuter vehicles. The reality of electric car living is that if you live in a house that fronts directly onto a street or you don’t have a garage with power then charging an electric car requires a long extension cable (which none of the electric car manufacturers recommend) stretched from your downstairs window, across the pavement, (a trip hazard that’ll have no-win-no-fee lawyers salivating) to your vehicle. And let’s not even think about people who live in a flat or multiple-occupancy household.

If only there were a vehicle that is narrow enough to fit in your porch or hallway while it charges from the mains. Something like an electric motorcycle perhaps?

Electric bikes make enormous sense as commuting vehicles. Easily charged, with enough range for most people’s daily needs. Easy to ride, park and cut through congestion. The trouble is that proper electric motorcycles cost (let’s be honest here) stupid amounts of money given the performance, unproven reliability and likely depreciation.

But, unless someone takes the plunge and builds generation 2.0 (which is actually what Harley’s Livewire represents), we’ll never get beyond the current selection of freaks, geeks and concept vehicles. All eyes are on Honda or Yamaha here. Harley and BMW might build high performance playthings that we’ll buy in moderate numbers, but when Honda or Yamaha  builds an electric commuter with the performance of a 250 scooter, 150 mile range and price tag that we will actually pay, that will be the equivalent of Apple unveiling the first iPhone.

And that’s the point for me. As petrol is phased out, it will become harder to find and more expensive, meaning we’ll be saving our ‘classic’ motorcycles for high-priced, nostalgic weekend leisure. Electric bikes will seem cheap to run in comparison when petrol costs £50 a gallon and, gradually, we’ll relent, because the bikes will be infinitely better and easier to charge, plus the people who make the rules have decided that’s what happening and the car-buying public will buy anything if they get inbuilt wi-fi, foot-spa and a ‘sport’ badge on the back

So, I’m reserving judgement on Harley’s livewire until we can ride it in the UK on the same roads we ride our normal bikes and away from the manic pace of a press launch. I’m pretty sure I won’t be spending £29k of my money on one, but that doesn’t mean it won’t sell. In a different world to mine there are plenty of wealthy people who spend that much money on classic bikes and cars that are way more impractical or more than that on a set of golf bats (probably). The money is out there and for anyone wanting to make an eco-statement while looking ten times cooler than anything with a Tesla badge, the Livewire is number one right now.