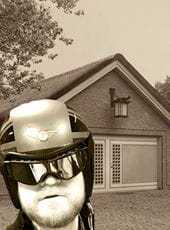 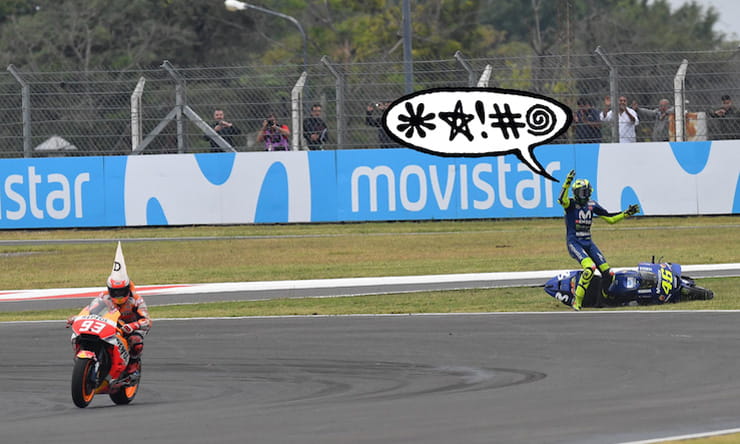 I’m guessing you’re busy right now sorting out the fall-out from Argentina, but me and the lads had a chat about it last night and we might have some helpful suggestions.

All sport is pantomime, we know that. And it works best when the good guys and bad guys are easy to identify. Racing needs heroes and villains; Ago and Read, Sheene and Roberts, Schwantz and Rainey, Rossi and Biaggi, Rossi and Stoner, Rossi and Lorenzo, Rossi and Marquez. Valentino might have gone from cheeky, boyish hero to the grand old Dame of MotoGP, but he’ll always be a hero. Officer Wakeman of the Kilarney Constabulary compares it to football. He likens Lorenzo to Eric Cantona; supremely gifted, thoughtful, but terribly flawed too. Where Marquez is more like a young Gazza; puppyish enthusiasm, talent and hormones, forever bumping into people.

The timing of the Argentine MotoGP meant that most of our parish’s race fans were in church and I have my suspicions that our policy of bringing your own communion wine (a controversial idea, but the corkage fees helped repair the roof) may have backfired. Thankfully, it was only a minor riot and would have been a lot worse if it had been the 16-foot organ pipe needing to be removed.  Father Donohue used to be the official ‘route-to-the-almighty’ of the fledgling Yamaha race team in the 1960s so he’s happy for the congregation to keep an eye on the ‘shared’ copies of Ma Finnegan’s MotoGP app so long as they keep on singing. That said, he did have to pull the McCallen boys up on some of their language as MM93 made his way through the field and back again. And then himself, when he dropped the C-bomb (as in ‘Christ-almighty’) as Valentino went down under Marc’s persuasion.

Talking of little-Marc, it’s really no surprise that he’s so flighty right now. Those of us who know his secret genetic make-up (https://www.bennetts.co.uk/bikesocial/news-and-views/blog/blog-marc-marquez-lean-angle-secrets-revealed) understand how at this time of year the Columba Domestica genus get giddy with the twitterpating, forever knocking into things. Historically, this wasn’t a problem for Marquez because during the mating season his Honda wasn’t capable of overtaking. But this year the bike is better and, combined with his raging pheromones and spectacular plumage, the poor lad simply doesn’t know which way to point.

You could see that on the grid when his bike stalled. What he needed was a minute in his coop to calm down and for Amelio to rub his breast and put trill on the floor for him to peck.

And, really Dorna, you have to get your house in order. All countries have sports where no one (including the participants) understands the rules. Americans have football, Europeans have rugby union and our English cousins have cricket.  Argentina was crazy because no one seemed to know what was going on. We like the ‘flag-to-flag’ idea because it gives two chances to laugh at Lorenzo, a quick cry when Rossi’s team forgets the tactics again and maybe make a few quid on some long odds of Miller or Petrucci winning a race. Mrs Anderson had a substantial wager on Jackass taking his first win and was very disappointed.

So, our advice would be three-fold. Firstly look at how the British Superbike organisers run their racing. Always in complete control, unafraid to make tough decisions, like the recent Donington weekend and making them in enough time that everyone knows what’s happening.

Secondly, introduce a football system of yellow and red cards for aggressive riding. Knocking into someone without them falling off gets a yellow card and ride-through penalty. Two yellow cards in the same race gets a black flag and no score. Knocking someone off their bike brings a red card, which means black flag, a one race ban and made to sit in the MotoGP stocks for an hour after the race so the other riders can throw energy drink in his eyes. Which is fair because, in the case of Valentino in Argentina for example, the old dame had made the best of a bad job, worked his way to 6th place and a decent chunk of points, only to come away with nothing for no fault of his own. At the very least he should see Marquez properly punished.

Thirdly, and this is my personal favourite, suggested by Bishop Bruford, who happened to pop by on his ZXR750K as we were watching the post-race interviews. When an incident happens that needs race control to investigate, Dorna introduces a VAR system like in the football and all the riders have to stop dead where they are until the verdict comes in, when they can then set off again.

It would bring a pointless delay to the racing perhaps, but also introduce a dramatic tension and prove an extra test of ageing bladders force-fed said energy drinks on the grid.

And it’d still be less ridiculous than what happened at the start of the Argentina race.