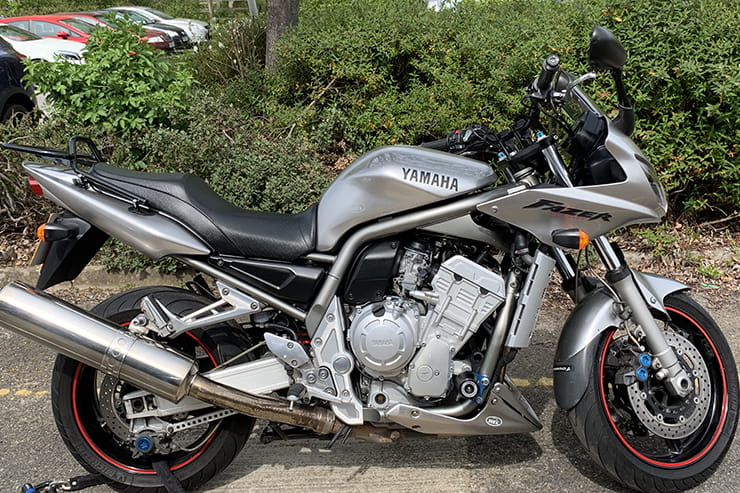 Talking to a mate at the bike show last week brought a fascinating insight into something we should all be worried about. He had recently bought a well-used, but tidy Kawasaki ZZ-R1200 for a European tour. He’s a smart bloke, experienced buyer and knows the difference between a good buy and doggy old hound. Time restrictions and foul weather mean he collected the bike in a van, so the first time he rode it was into work the following day. Like most old Kawasakis it still felt fast and solid - a decent buy, apparently. As the road opened out into dual carriageway, he opened the ZZ-R up to enjoy the nostalgia of ram-air, carbs and old-school horsepower. As the roundabout approached, he shut the throttle, grabbed the brake lever...and grabbed again...and then harder...and harder still and…luckily, there was a gap in the traffic on the roundabout that he could flick the bike into. Otherwise, things could have ended very badly.

On arriving at work, he removed the brake calipers and checked the pads. He’d seen they had plenty of material left when he checked the bike, but what he couldn’t have spotted was that, rather than the quality items like you’d expect to be fitted to a 180mph motorcycle, they were in fact, cheap Chinese horrors, on sale (he soon discovered) via eBay for £6.14 per caliper, which explains their performance.

At this point he also examined the chain and sprockets more carefully and they too were cheap items not really fit for a motorcycle capable of outperforming a Ferrari in a straight line.

Here’s the thing. This might have been an old bike, but it wasn’t a cheap bike and, whoever fitted those parts was making its performance considerably worse and less safe than it should have been. I can understand it if an older bike needs a new exhaust or body panels or screen and the owner goes for a cheaper aftermarket item rather than original equipment or quality aftermarket parts. But a decent set of aftermarket brake pads aren’t expensive - maybe £25 per caliper - a quality chain and sprockets could be £150, but it’s an essential part of your power train and will last 10,000-15,000 miles. 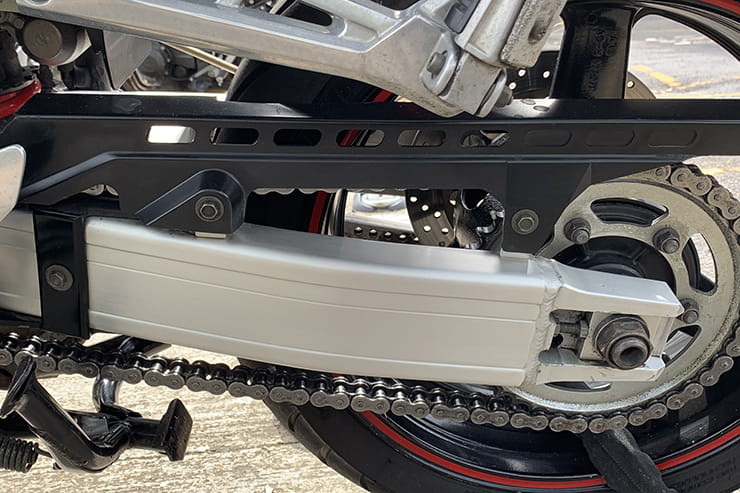 Tyres are the same. The rubber you fit is probably the biggest influence on how your bike handles and, yet so many people run them till the profiles become gradually flatter and get frustrated when they don’t go round corners. Modern tyres can do many 1000s of miles, but they often go ‘square’, which ruins the handling, long before they get illegal. We’ll change the squared-off rear.

Sometimes we even get so fed up with the lousy handling that we part-exchange our bikes for one that the road tests tell us handles much better. If only we’d just bought a matched pair of new rubber and changed the fork oil (the other thing we all ignore), the handling could have been restored.

Look at it this way. If your local bike dealer, selling you a brand new Wizzbang-Million RRR-R offered you the choice of decent tyres and brakes or just the standard, Teflon tyres and budget Chinese brake pads for £150 off list price, which would you choose? Me too.

So why, when they need replacing would you fit cheap, nasty replacements that are completely unsuited to the performance? It’s like choosing to feed your kids on sawdust because it’s cheaper than porridge and expecting them to still glow in the dark on the way to school.

I rarely buy expensive bikes, preferring to operate in that challenging sub-£2k end of the market. At those prices you walk away (metaphorically, at least, a bit of cunning can spot a hound from its eBay pictures) from a lot of horrors before finding the right bike. My current bike – a £1600 Yamaha Fazer 1000 – stood out a mile as a good buy because the seller had just fitted a brand-new genuine Yamaha endless OE-spec chain and sprocket kit, genuine Yamaha crash bungs and a brand-new pair of Michelin Pilot Road tyres. Anyone who fits an OE chain has the right approach to maintenance in my book. For those who don’t know, the reason an OE chain is so expensive is that the manufacturers specify a much higher grade of chain than the typical ‘approved-replacement’ spec (which is perfectly safe and will perform properly – just not quite for as long) that most aftermarket suppliers recommend that costs around 40 per cent less.

That stuff matters because, while my bike might be 17 years-old and worth less than a five-year-old sports 125, it is also still more than capable of doing the national speed limit…times-two…and still have one more gear to go. I’m very happy that I have a good, cheap bike, but that doesn’t mean I have to fit cheap parts to it. For example, I’m thinking about fitting a new shock absorber – the OE item wasn’t brilliant when new and mine has done 38,000 miles. There isn’t a huge choice for middle-aged sports tourers and what there is costs the same as for a nearly new sports tourer because shock absorbers, whether for old or new bikes still need to have a spring, a damper assembly, a durable body and adjusters. It costs no less to build a shock for my funky old Fazer than it does for a nearly new Kawasaki Z1000SX. I’ll still have a cheap bike at the end of it, but one that handles much better than it did before. As soon as I’ve swapped the squared-off tyres too of course.