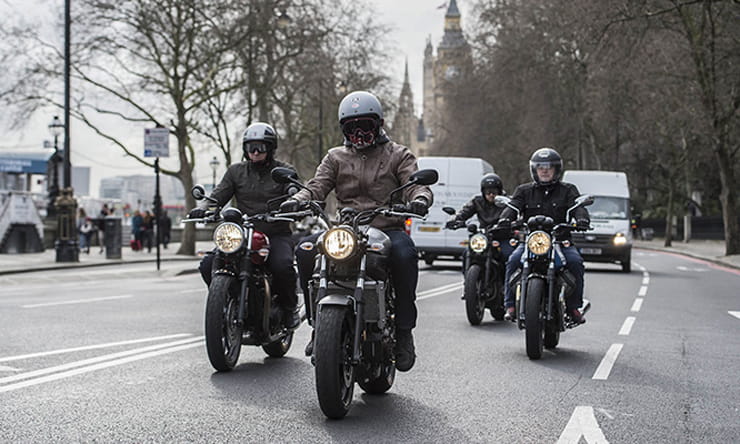 Flicking through the classifieds, gazing at a late-90s Honda FireBlade. Last of the 16 inch front wheels, a little less radical than earlier bikes, plenty of choice and built like only Honda used to. Prices sit around £2000, which didn’t seem too bad until I remembered that they are 20 years old.

1998 was the height of the parallel import sales boom and most FireBlades, imports or otherwise sold for around £7000 that year. So £2000 is around 29 per cent of its original selling price. If I’d bought a brand new BMW 735i luxury saloon car in 1998 it would have cost £45,640. The value of that car today is around £500 or 1.1% of the original sale price. The car is a banger, but the bike is still a viable vehicle with many years’ use remaining. The FireBlade’s depreciation is 26 times stronger than that of the big luxury car.

Last week I was talking to the guys at Bike Shed about their We Ride London campaign. Part of their challenge right now is the fee for using old vehicles in big cities. One of Boris Johnson’s legacies as Mayor of London was the creation of the Ultra-Low Emission Zone, where anyone driving or riding a vehicle made before 2007 through London will have to pay a £12.50 emissions tax.

As someone who’s spent a lifetime breathing in other motorist’s filth, I’m all for promoting clean air. The 2007 cut-off is because that’s when the Euro 3 regulations came in for bikes (for cars it’s a Euro 4 petrol cutoff and Euro 6 for diesels). Anything made in the dark ages before that date is apparently so deadly that following one is like sucking on a coal mine. Unless it was made before 1973 because, bizarrely, all vehicles made before 31/12/1972 are exempt. So, an early Kawasaki H2 is ok, despite being a smokey, gas-guzzling 750cc two stroke. Any number of ancient Lambrettas and Vespas are also excluded and that 1960s American muscle car you always fancied? Feel free to enjoy its uncatalyzed, 12mpg whenever you like.

Under the new rules it doesn’t matter if it’s a mint 1998 Honda FireBlade or a knackered diesel Range Rover, the fee is the same.  And that doesn’t seem right. The bike will be whizzing through traffic, running in its optimum efficient zone, returning more mpg than the most efficient petrol/electric hybrid cars. While the car will be idling and belching as it accelerates all that tonnage between queues. And the bike will probably be still showing less than 50,000 miles and running much more like a new vehicle, where the Range Rover, having just been clocked back to 103,000 miles for the third time and, now worth 1.1% of its original value will have been lucky to see an oil change, never mind a proper service in the last ten years. Which is why all those old diesels smoke like a loco once they leave the requirements of their company car leasing agreement and why London exceeded its entire annual air pollution for 2018 before the end of January.

Compare that to the FireBlade; still worth decent money and probably still being loved and serviced properly, still not contributing to congestion and yet, from 2019 facing a charge of £62.50 a week to get to work in the centre of London.

Rules breed rebels and ill-considered blanket rules breed creative, smarter rebels. Specials builders have always put bigger, faster engines into unsuitable machines and it won’t be long before London is bristling with GSX-R1000K5-powered BSA Bantams utilising a custom-built Harris GP chassis that’s had the original Bantam registration transferred. Even better will be the FireBlade-powered Lambrettas, wheelying into every bus queue of nuns, leaving hundreds of broken mirrors and molten acrylic Parka fur in gutters all over the capital.

And, of course, the ultimate motoring rebellion has always been the Q-plate. For those who’ve led a sheltered life, a Q-plate is what you get on a vehicle made from several others whose age cannot be accurately determined. A Q-plated vehicle could be three or thirty three years old and my guess is that the ANPR cameras won’t be set up to deal with Q-plates and so the capital will be shortly be full of choppers, specials, streetfighters, rebuilt cut-and-shut write-offs, stolen-recoveries and comedy kit cars. What was conceived as a tax on the scruffy will actually create a Metropolitan version of Mad Max minus the WWE leather jockstraps, Tina Turner or (sadly) anyone called Goose.

Of course the reality is that by 2021 we’ll have realised that diesel fumes cure cancer, catalytic convertors cause obesity in polar bears and male-pattern baldness can be cured by sucking on a Vespa. Post Brexit we’ll have banned anything that starts with the word ‘Euro’ and Jeremy Corbyn’s incoming Labour Government will have invited the Motorcycle Action Group to determine transport policy, leading to a boom in choppers, streetfighters and Q-plate trikes.

And a 1998 Honda FireBlade will still be worth £2000, everywhere except the south east of England.