Blog: The future is a ten foot long chopper (again) 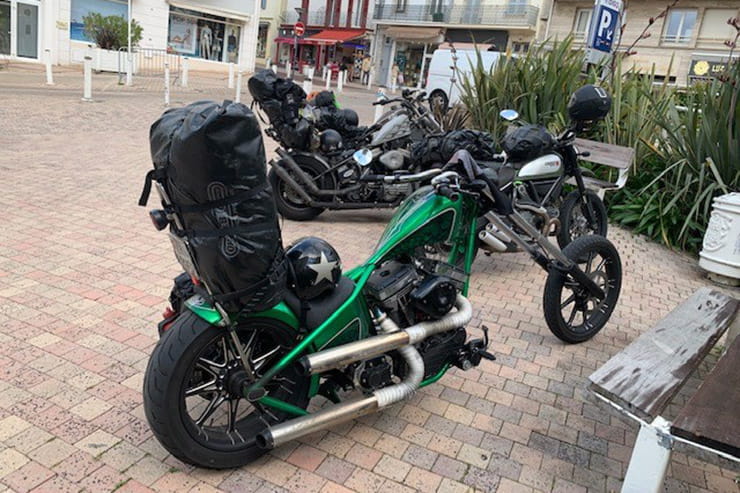 Is it just me or does anybody else want a crazy, unrideable chopper? It’s been 15 years since I sold the last one, bought when I was 39 from a bloke who was 41, who’d bought it when he was 38 from a bloke who was, er, 41… Personally I can’t think of a better way to celebrate your mid-life moment than a ten foot long chopper called Ramessess II, and now, 15 years on, I think I might want another. Most of last weekend was spent scanning ebay for a totally inappropriate motorcycle.

The unrideable bit is important because otherwise it’s just a slightly worse version of what you already have. And obviously, this bike is bought ‘as-well-as’ not ‘instead-of’ your current bike. Ramessess II was challenging because the steeply-raked forks meant you steered it like a boat’s tiller, had to approach T-junctions at an angle (or you couldn’t see out of them because the front wheel was so far away), felt every single loose chipping through the hardtail frame and had no effective means of stopping. The fuel tank held four litres – just enough to get to work and back and it spat flames from the side-mounted exhaust. I loved it. 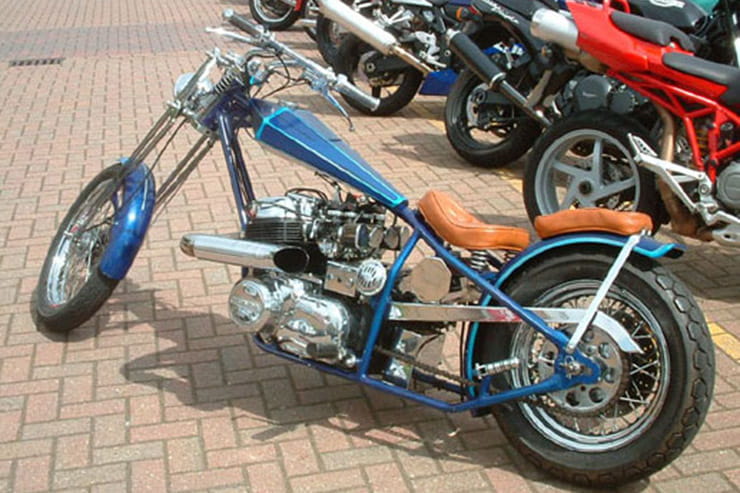 Walking round the Bike Shed Show in Tobacco Dock last month was fascinating. Not just because the bikes were so stunning, it was the size, scale and diversity of the audience that made me really look up and take notice. Anyone who still thinks the Bike Shed thing is some kind of fashion-led, hipster novelty is in danger of looking very, very foolish. What’s happening here is the custom scene, streetfighter builders and café race/dirt track scene starting to evolve and meld together. Chuck in a growing collection of modified classic trail bikes and you’ve got something that is starting to feel like a proper and credible successor to the UK’s past obsession with sports bikes.

Bike Shed was not only full of some very cool looking bikes, but, unlike my old chopper, many of them look like you can and would actually ride them too. Never mind, they’ll soon get the hang of it. 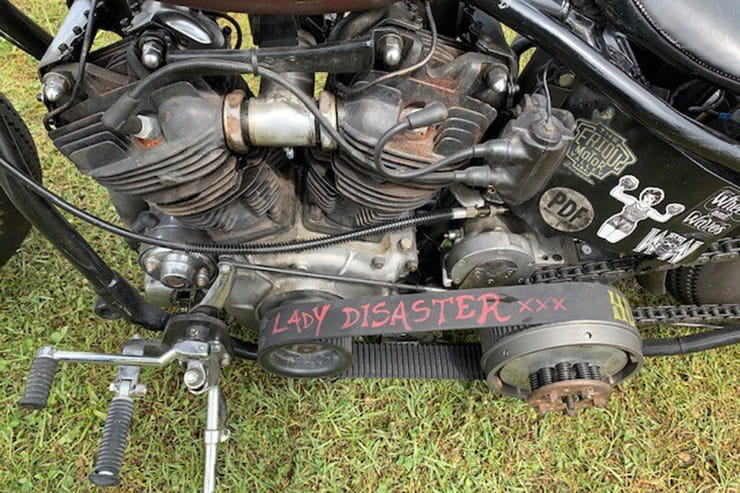 The strength and credibility of the UK scene was reinforced walking round the ‘Wheels and Waves’ festival in southern France a week or so later. In principle the two shows share a philosophy and audience. Wheels and Waves is theoretically a bigger and better show, but where I’d felt welcomed and enthusiastic at the quality and inspiration of Bike Shed, W&W was essentially a show full of companies selling t-shirts and fancy footwear by positioning a couple of ‘ok-but-not-that-special’ custom bikes outside their tent. Add in a crowd of Les Hipsters Francais who’d spent a little too long in the dressing-up box and it wasn’t hard to see why Honda’s stand, packed with a dozen or so very-well-customised CB1000Rs was by far the best thing there. And not just because the breathed-on CBs looked like the future of custom building instead of a throwback to the 1982 Bell Vue Motorcycle Show. 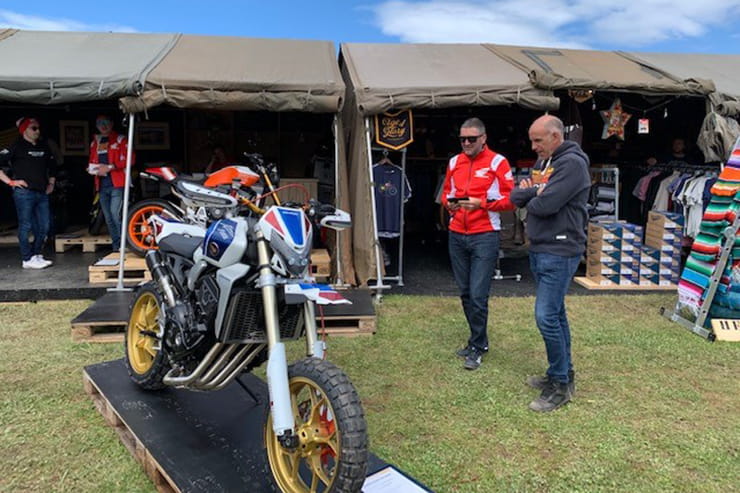 Honda’s funked-up CB1000Rs stole the show. BikeSocial bonus points if you can name the racing legend in the red Honda fleece

My biggest beef with the custom scene for a long while has been that there’s very little new that comes out of it. Choppers still look like choppers, café racers in the UK have evolved from 60s rocker-reps to a cool-but-ultimately-unimaginative 1970s AMA/endurance racer chic. All very pretty, but what happened to custom bikes being the crazy things that blew us away with their radical engineering, obvious unrideability and ‘bike-of-the-future’ styling? Custom has gone classic aside from a few radical builders still going for broke. And exhaust bandage is the new chrome, apparently.

Most of the manufacturers have cottoned on to this and are building credible, well-performing machines that will also lend themselves to customisation. But maybe it’s this manufacturer involvement that’s halting the progress. When Honda are building their Neo-café racers (and let’s not forget the DN-01 and Vultus), Kawasaki have the H2, Yamaha have Yard Built and Suzuki are selling a turn-key 150bhp, 21st century Katana, that already looks like the future, the past and the custom scene combined, then I guess it’ll take some crazy engineering to go one better.

Plus the custom scene has always been fuelled by an associated bolt-on parts scene. Most of those horrific early-1970s choppers and café racers were built from horrifically dangerous kits of nasty parts. One of the joys of looking through old bike magazines are the pages of adverts for bodykits, custom seats, big bore kits and Jock Kerr turbo conversions. 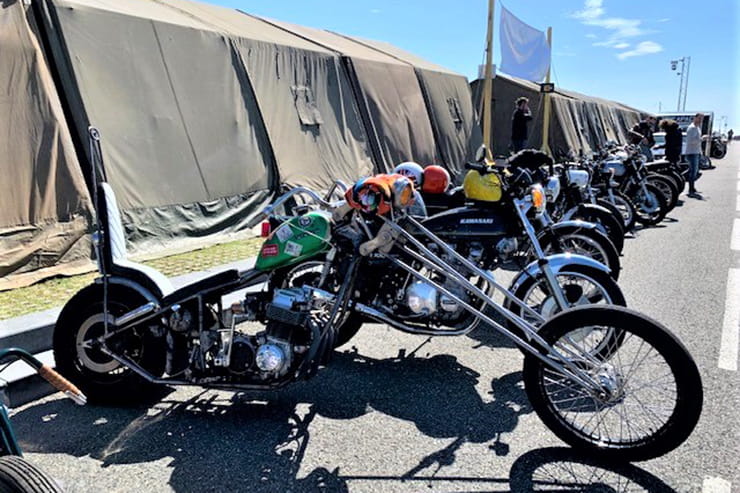 Nothing about this bike is at all dangerous or unrideable…clearly

Maybe that’s the point. Back in the 1980s when Ramessess II was built it didn’t matter that your shed-built chopper didn’t fuel properly, brake or go round corners because the donor bike you started with didn’t do many of those things either. Now, even the most hum-drum of motorcycles does these things pretty well so why would you mess it up to look cool. And besides, what will your dealer say when you take your hardtailed, flat-track Gold Wing back for part-exchange at the end of your PCP finance deal?

Which brings us back to the beginning and the search for an (almost) unrideable-but-entertaining motorcycle. And a light bulb moment. What I need is a Harley Davidson. Some of their production models look as cool or cooler than any genuine custom bike. They are challenging enough to ride as to make them interesting, but surprisingly capable and satisfying once you get the knack – a bit like most proper choppers. A modern Harley will also be much more reliable than a custom bike, easier to live with and spare parts are usually available from stock. Used ones are plentiful and, once you get past the optimistic asking prices of private sellers, can be had for sensible money too.

Is this it? The moment when I cross to the Harley side of the street? Why not? Change is always good and it doesn’t have to be for ever – just a summer or two.

In the meantime, if anyone knows the whereabouts of a particular 1980s digger called Feline Fantasy, please get in touch. I know a man with a space in his garage waiting… 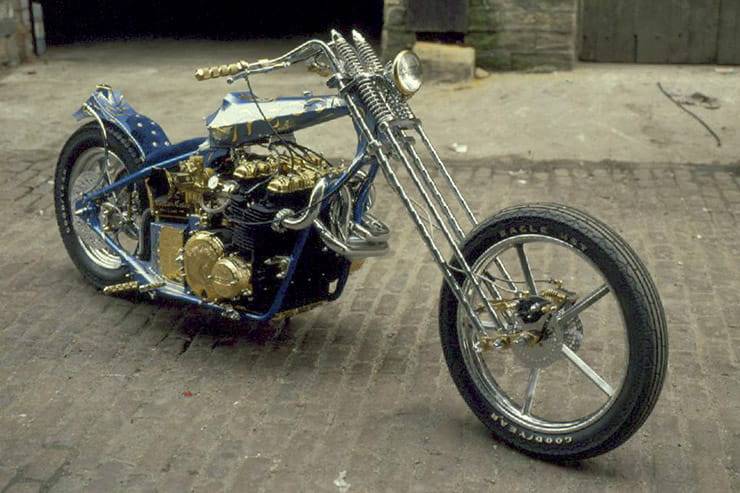 When your standard Z900 motor isn’t fast enough for your teeny-tiny tribute brakes? What you need is a turbo…