Speeding is history, it’s how quickly you get there that counts 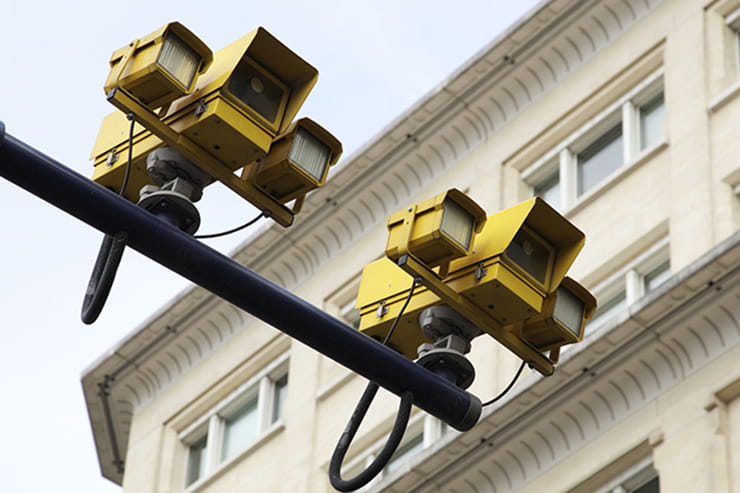 On the surface the story on the news was simple. A frustrated driver, convinced he wasn’t exceeding the speed limit, spends £30,000 defending a £100 speeding ticket. Richard Keedwell claimed he wasn’t doing 35mph in a 30mph limit as charged, but he lost. And then lost the appeal. And then lost another appeal in the crown court.

As someone who managed to trigger the same speed camera three times in 18 months, resulting in one speed awareness course, two lots of three points and more than £300 in fines, I can sympathise with anyone frustrated at speed cameras. My story makes me look even more foolish than the man who spent £30k to avoid paying £100, but the difference seems to be that I admitted I was foolish and took the fiscal spanking(s).

I’m a stupid man, clearly. But not particularly a bad one. 68mph in a 60 limit on three separate occasions (nothing if not consistent) is hardly the crime of the century, but I broke the law and that’s the fine.

My biggest issue when it happens is actually to do with the shame of it. Not just the shame of the punishment, but more because I was stupid enough to get caught...again. Part of the anger comes from embarrassment and a refusal to accept that I can’t just do what I like and get away with it.

That’s a bad thing clearly, but when you ride a bike, making up your own rules is part of the deal. It has to be because there are circumstances when making up your own rules is the thing that saves your life. When a car driver does something unexpected, sometimes you have to take evasive action. When the traffic is gridlocked but nothing is coming the other way, sometimes you will cross a double white line or go the other side of a traffic island to ‘make progress’ and keep out of the way of the drivers not paying attention. One of my recent incidents was following a car swerving erratically from side to side. I couldn’t work out whether the driver was texting, having a fit or being attacked by a wasp, but I had no intention of being anywhere near when the accident happened, so I got the heck out of there. Unfortunately, we were close to the camera at the time and taking-positive-action-to-not-be-killed cost me £100 and three more points.

But, at some point we will all do it, because our well-honed sense of self-preservation steps-in.

Up on the pavement, down a cycle lane, occasionally even the wrong side of a solid white line. I’ve done them all and always for safety – why else would you?

If I get pulled by a traffic cop I will happily explain this and, in 36 years on a bike I’ve talked my way out of as many as I’ve been nicked for because generally I do things for the right reasons.

But you can’t explain yourself to a camera operator. There’s no conversation, just an anonymous-looking letter (Lincolnshire Police use PO Box 999, which is a nice touch) and an invitation to either pay-up or buy a tracksuit and join the Magistrates Court Crew. 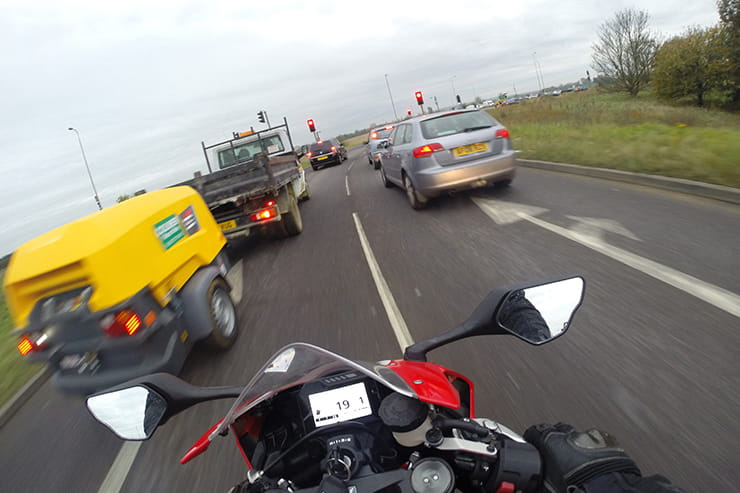 I understand the anger of the man who spent £30k, but I understand that speed cameras are generally accurate and the latest average speed ones are clever enough to catch motorcyclists even if they only get one rear shot and a front one (my last ticket taught me that one).

A few years back I did an experiment with speed. At the time it was because fuel prices had just jumped by 25 per cent in six weeks and I was commuting almost 600 miles per week, but the results were fascinating. On a route involving fast, busy A-roads and much overtaking I’d rarely look down at the speedo and see less than 80+mph. But my average speed door-to-door was around 60mph. So I set myself a limit to save fuel; no more than 70mph. Strangely, my average speed remained exactly the same, but I was saving two litres of fuel per day. So I dropped my limit to 60mph. The average speed dropped to 50mph and I saved another litre per day, but the ride was a lot less pleasant.

Analysing what was happening was interesting. At the highest speed I was overtaking long lines of traffic and then then hitting the back of the next queue (which was usually doing 50mph) sooner. By the time an overtaking opportunity presented itself I might have been there for a minute or so and it was this that was bringing down my average speed.

At 70mph, I’d still get past the first queue, but then took a little longer to reach the next one, which seemed to give me more time to assess the traffic and create an overtaking opportunity, rather than seize one when it appeared. It felt smoother, safer, more in control and was no slower than seemingly riding quicker. Riding much more smoothly also helped save the fuel.

A 60mph limit didn’t give me the leeway to overtake and so I ended up stuck in more traffic, overtakes took longer and were much more scary, meaning I did fewer of them.

Funnily enough, when I also tried riding at 50mph maximum – which I thought would be terrifying as everything overtook me, I also averaged around 50mph because the average speed of the other traffic was similar, meaning I got to the front of the queue and just stayed there – rarely having to slow down for anything. On the odd occasion when a tractor was holding up traffic I could still get by on the bike at 50mph to the front of that queue and off we went again. In 60 miles at 50mph I was only overtaken by half a dozen other vehicles who were all going much quicker and sped off to join the back of the next queue, where I caught them up after a few miles anyway.

Those few weeks had a massive impact on my riding. It changed my focus from ‘how fast does it go?’ to ‘how quickly will I get there?’, and the challenge became about maintaining momentum and riding effectively, rather than dribbling about crazy numbers on the dash. 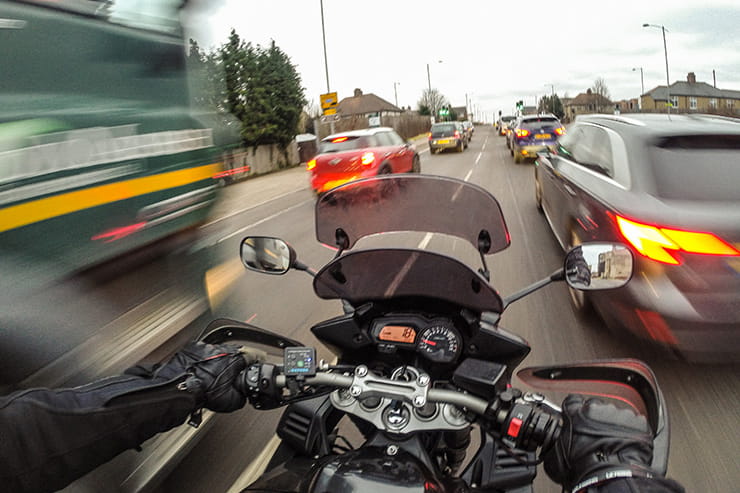 So, it annoys me when I get it wrong and another envelope arrives from PO Box 999. Not because of the fine and the points (although one more and I need to start worrying), but more because I should know better. Riding faster doesn’t get me there quicker, it just gets me into trouble. Which is fine, except that, left to my own devices, on an empty country road, the speed at which I feel most comfortable, alert and, bizarrely, safest is still somewhere just north of 70mph. I don’t understand why, but below that I feel sluggish and my mind wanders, too far above it and I’m an accident-in-waiting. At ‘my’ speed I feel smarter, more alert and properly in control. And, while a proper policeman, following me down that road would probably acknowledge that, a camera operator will just press the button and none of the above will ever stand up in court.

As we head out of summer into the slower riding season (let’s not call it winter, that only lasts for a few weeks) I’m determined to make this year different. I’m going to spend it riding bikes that don’t make going so fast that easy and work harder on average speeds, smoother riding and fuel consumption again. Clearly, this will make me the second most boring man in motorcycling, but I’m curious as to the results. Anyone out there fancy joining me?