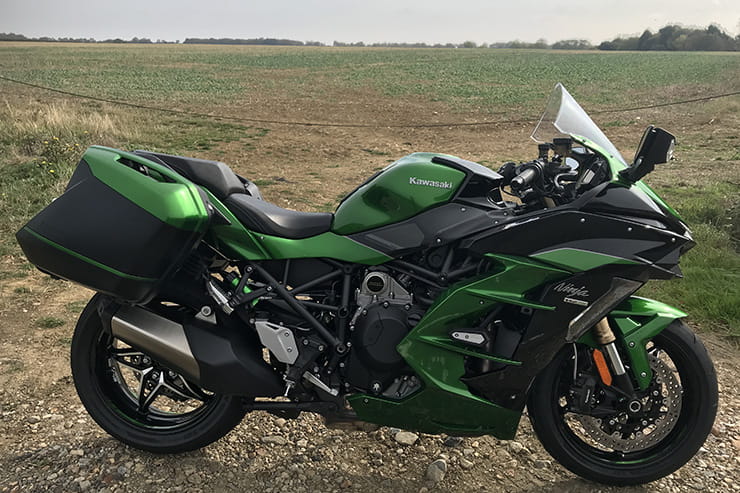 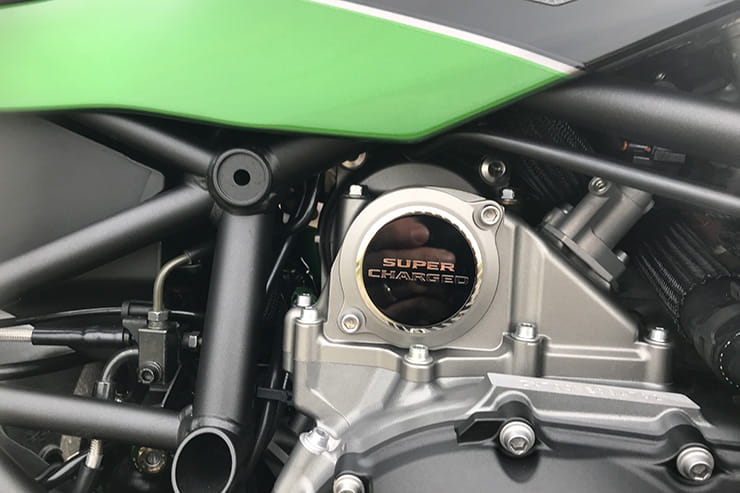 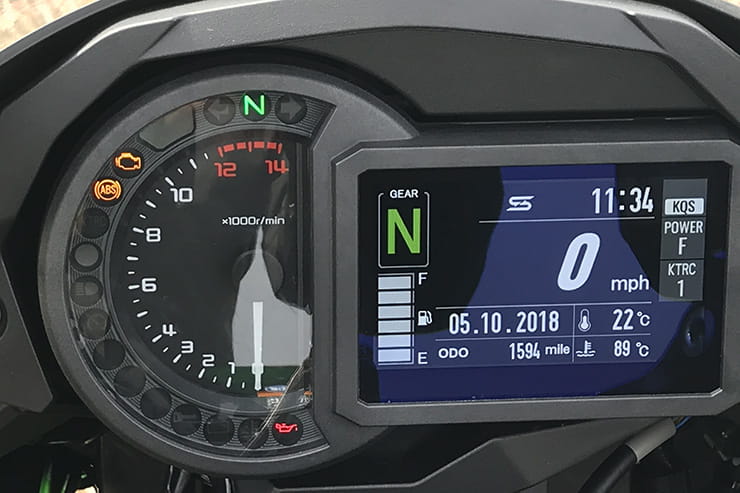 In 1943 the RAF introduced a radical new aircraft to their fighter pilots called the Gloster Meteor that replaced pistons and propellers with a jet engine. I’m guessing that their faces, on returning from the first flights were similar to the one I’m looking at now, in the reflection of a coffee shop window in Leicestershire. I’m trying to make sense of my first 100 miles riding Kawasaki’s stunning H2 SX.

Forgive the impending cliché, I’m not myself right now, but the key thing about this amazing supercharged motor is that it’s not about ‘how-fast-does-it-go’, but instead, ‘how-it-goes-fast’.

The last 100 miles has made 35 years riding hundreds of conventionally-aspirated motorcycles feel a bit underwhelming. A bit like the difference between instant coffee and a fully whipped cappuccino. If this is supercharged (and it certainly feels super to me), does that mean we now have to call conventional engines mediocre-charged?

The best way to describe how the H2 motor differs is this. Think about a typical ride. Few of us look at our rev counters, we just instinctively feel when our engine hits peak torque and the thrust starts to drop away. At that point we change up a gear and repeat till we reach cruising speed. On a supercharged engine, as the revs rise the blower spins faster and there doesn’t appear to be a ‘peak torque’ moment, just ‘more torque’.

In the early days of turbos people talked about turbo-lag as the systems took time to get spinning. I’m convinced there’s also a sort of forced-induction over-run where when you shut the throttle the system keeps on adding boost for a split second, which is enough to have me and 260kg of motorcycle arriving at a corner doing ten mph more than expected. I’m not a hard user of brakes on a bike. I like to look ahead, shut the throttle, use the gears and avoid upsetting the balance of the bike. If I’d done that today there’d be an H2 SX-shaped hole in many hedges across the Midlands. 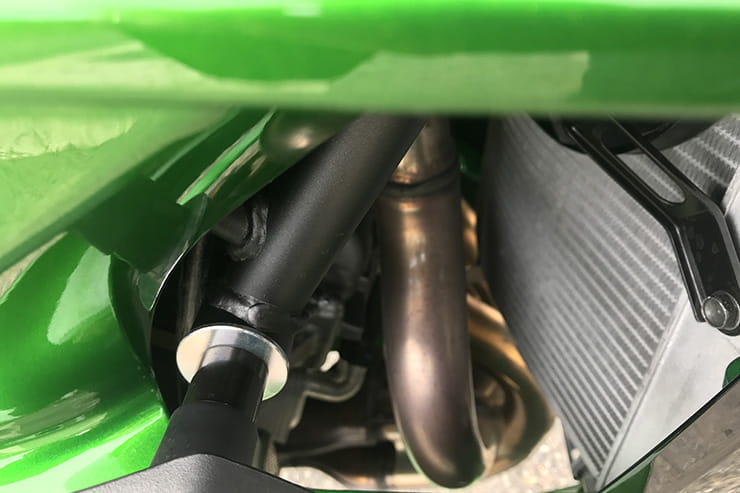 It’s an astonishing motorcycle to ride. Look down at the speedo and far-too-often the number you see begins with a ‘1’ and that’s not a good thing in the UK in 2018. I love being able to indulge my Mad Max supercharger fantasies and I love it even more that someone has reinvented how to make a motorcycle feel fast. More than that I love it that Kawasaki are still capable of being the daftest, most batshit-crazy motorcycle company every now and then. The company that brought us the original H2 750, Z1 and the first ever semi-factory turbo motorcycle and the GPz900R and the KR-1 and the ZXR750, ZZ-R1100, ZX-10R and H2 still have the mindset that when the engineers present their 197bhp, supercharged motor to the board, someone still says ‘Hey, let’s put it in a tourer and make it really uncomfortable’ despite that idea making as much sense as adding extra sugar to Donald Trump’s Coco-Pops. It’s utter genius.

Calling the SX uncomfortable might be contentious. Compared to a ZX-10R or the other H2 models it’s definitely easier on the back, arms and neck. But where companies like BMW spend hundreds of thousands on ergonomics, Kawasaki clearly spent all the money on the engine and styling and then drew the riding position on a napkin in half an hour. The fat petrol tank forces your legs apart, while the high footrests will remind anyone over 50 of their first air-cooled GSX-R. The bars are neither high enough or wide enough to be natural or low enough and narrow to be sporty. I like how the bar grips seem to be made of the grippiest rubber ever as if to help you hang on.

At high speed the riding position works, mostly because you are thinking about many more things than whether or not you are comfortable. Stuck on a dual carriageway at 55mph, in the queue of traffic waiting behind the truck overtaking another truck half a mile ahead it takes about five minutes before you start fidgeting and wondering if male hips are supposed to spread this wide. 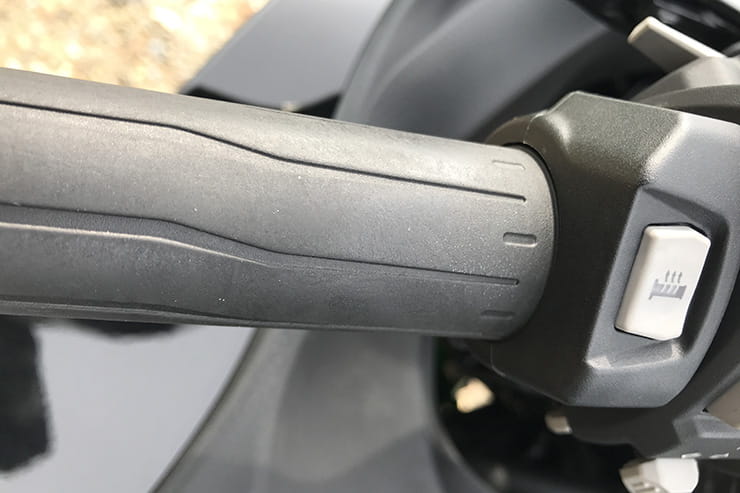 The best solution is to avoid anything but A-roads where you can overtake at will. B-roads are better than you’d imagine because the brakes are excellent and there’s enough quality in the suspension to do a decent job on the bumps and control the bike on and off the brakes. Plus, the H2’s longish wheelbase and well-chosen steering geometry help it steer quickly, but predictably and consistently too. I did find myself hanging off it a bit more than most bikes, but when arriving at a corner ten mph faster than expected, every little helps.

Don’t dismiss that last sentence if you’re thinking about buying an H2 SX. I’m not joking. In the dry, with your head in ‘this is a motorcycle so I’m going to explore the darker bits of my personality’ mode, you really do arrive at every corner (or even slight bends, which suddenly become corners at speeds beginning with a ‘1’) going much, much faster than usual and that asks questions of your brain, reflexes, riding abilities and commitment.

What intrigues me most about this bike is what it makes me become. I can ride a 200bhp Fireblade or GSX-R with all the self-restraint required and expected of someone my age. But I’m struggling with the H2. I’m not thinking about it too hard, just riding it in a way that feels natural. And the end result is something that I am deeply ashamed of.

Funnily enough, a few days later, riding to the Stafford classic bike show and back; 200 very wet and very windy miles in the middle of Storm Callum, the supercharger’s other trick - smoothly delivered, consistent power delivery - allowed me to delicately plot a still-fast course along some flooded, back roads, covered in leaves and mud and branches in absolute confidence despite all the electronics still being set to minimum. It was dark when I set off which taught me two things; firstly, unlit switchgear is a waste of plastic when you have so many functions to control. I had no idea how to alter anything because I couldn’t see the switches. Secondly, the Kawasaki’s side-mounted cornering lights were either ineffective or switched off (and there’s no point having a switch for the lights that you can’t see in the dark, even if such thinking is very Kawasaki!) because there was no noticeable assistance at all. 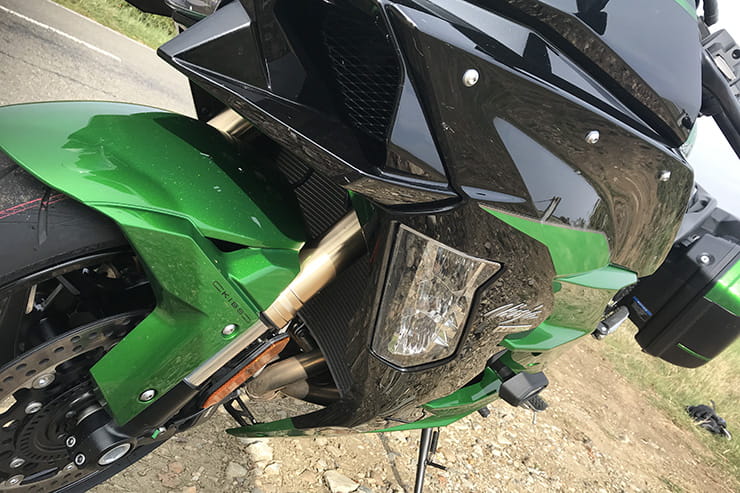 These are the journeys where you discover the niggles. The indicator switch that doesn’t always cancel without a firm press, the awkwardness in finding neutral, a quickshifter that is more clunky than standard shifting at anything other than big throttle openings, TFT display with no automatic ‘night mode’ that’s too bright on unlit roads and a back brake that needs a bit more feel and power to add stability on wet roundabouts.

Back to the beginning of this piece though and reflecting (literally) sat in the coffee shop window, it’s doing the Kawasaki a massive injustice to call it a sports-tourer because it clearly is much more than that. The H2 SX is one of those special machines that defies categorisation, like Yamaha’s V-Max or Honda’s NR750 or a Bimota Tesi. It’s a statement machine, just like the original H2 a few years back. Unlike most of the above though, the H2SX actually works bloody well as a motorcycle you can ride every day. There might be some niggles, but compared to the other legends listed above it’s a well-developed consumer pussycat. The biggest problem (apart from the 33mpg when thrashed) will be how many hours in the saddle you can manage before the reality of how you behave while riding it catches up with you. My total was nine and a half over four rides and, even though I felt thrilled and privileged to have been able to ride it, in many ways, I was glad to give it back. 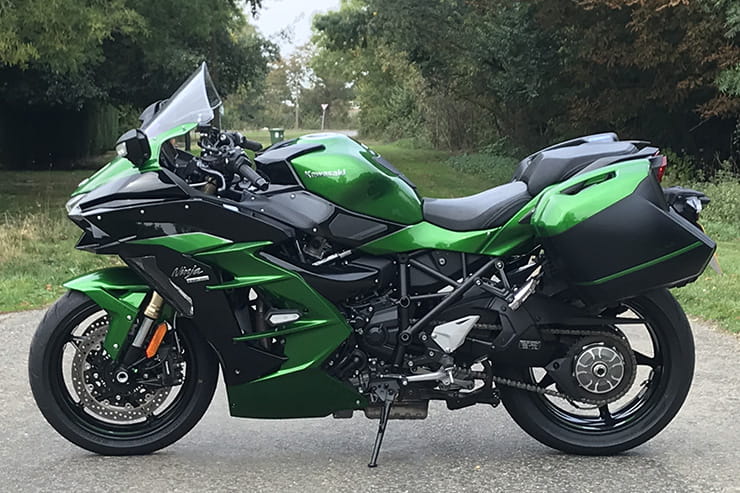 What’s the difference between the H2SX and the H2SX SE?

Fundamentally the two bikes are the same. Same engine, chassis, suspension, brakes and bodywork. The SE gets a TFT dashboard, cornering lights built into the fairing, pannier rails and panniers as standard, the special green paint job, a comfort seat, centrestand and heated grips. If you bought all that lot separately it’d cost you a lot more than the extra £3000 the SE version costs. Personally, we’d have the standard bike and add the centrestand, heated grips and maybe the comfort seat, which would cost £750 extra on top of the £15,099 list price and save the rest for speeding fines, bribing policemen once you’ve amassed nine points and some decent life insurance.

Three things we love about the Kawasaki H2SX SE