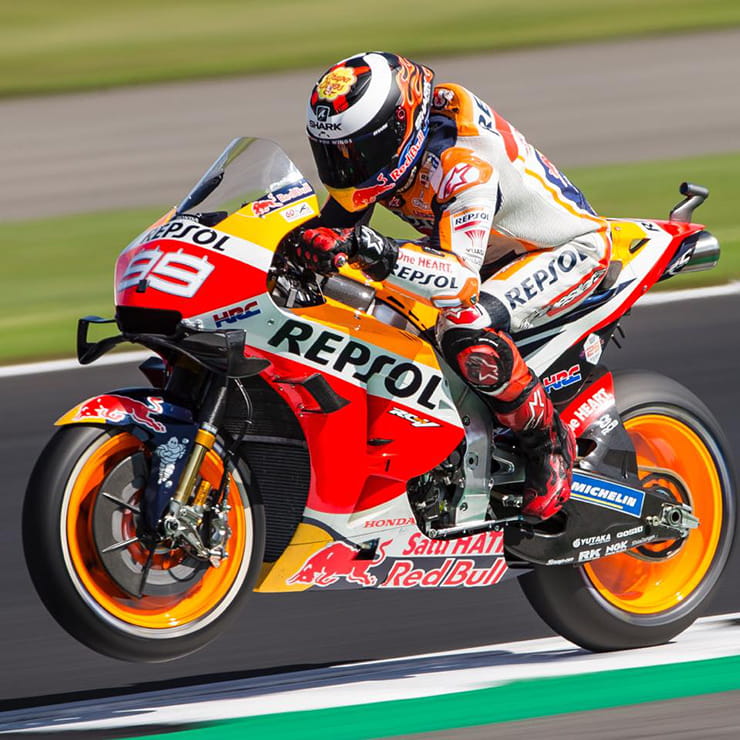 The best thing about motorcycle racing has always been that the guys who take part put everything on the line for our entertainment. It doesn’t matter how much the BBC tries to turn football or golf into some kind of gladiatorial contest with moody music and square-jawed backlit face-offs in their previews – nothing else in sport (ok, maybe the TT) competes with MotoGP for putting it out there and risking everything for a bottle of cheap bubbly and glass bowl replica of your nan’s front room.

Which makes it all the more amusing that MotoGP runs itself more like a Xmas panto than the all-or-nothing gladiatorial event that it is. We support our hometown heroes and boo the bad guys from foreign lands with their silly haircuts and inability to pronounce the word ‘reeethurm’. And for the last 20 years we’ve had Valentino, who plays the double role in our panto of plucky hero and, these days, the Grand Dame too.

Somehow though, it’s always the villain we find fascinating. From Hailwood and Read, Roberts and Sheene, Schwantz and Rainey, Doohan and Criville, Rossi and, er, take your pick from Biaggi, Gibernau, Lorenzo or Marquez.

Lorenzo was the best villain yet (and the most obsessed with gladiators) and he’ll be sadly missed. Proper villains have to be flawed, but they also have to be genius enough to make a death-ray laser beam and construct a secret lair from an extinct volcano. Jorge had the undecipherable loopiness and the stunning talent to make the grade.

No other rider, when fully fit, including Valentino (for the last ten years, at least) could get on a motorcycle and do lap times over and over again at the same crazy, relentless speed, inch perfect like a machine. No one (also including Valentino) could be quite as frustrating when it suited and not be a team player because his personal agenda required something else. Depriving team-mate Andrea Dovisioso and Ducati of the chance to win the title by refusing to let him past in 2017 was pure Lorenzo. The team were doing all they could to encourage him to let Dovi past (remember those wonderful ‘suggested mapping 8’ pit boards?), but Jorge saw it differently.

And that’s the point. You don’t get to be a multiple world champion by being the nice guy. Schwantz and Mamola were the nice guys, but Rainey won three titles, Lawson won four and Doohan bagged five.

The reason Valentino won all of us over was that he was the good guy who also won the titles. Jorge has always been Jorge. What he lacks in laser beams, henchmen and volcanic real estate he makes up for in raw eccentricity and unpredictability.

So who’ll be the bad guy now? Marquez, maybe, but he’s also too much of a good guy and he’ll be around long after Vale is playing to the crowd at the end of Clacton pier. Dovi is too nice, Iannone irrelevant and the Espagaro brothers too forgettable.

What Honda needs to replace Lorenzo is a rider with obvious talent, but a chink in his armour that means he can’t help but take out the good guys at the most inappropriate moment. Romano Fenati is the paddock’s current ‘most-bad’ boy but he’s clearly not ready for the big league yet and while Johann Zarco demonstrated his ability to bump and barge with the best of them on the Tech 3 Yamaha (and definitely has the enigmatic mystery needed), he’s nowhere near as weird as Jorge or as aggressive as Simoncelli, who, for a while looked like the perfect candidate for MotoGP’s bad-boy role.

Maybe the organisers should try a different tack instead and remove the whole pantomime element by giving the ride to Jonathan Rea, who has none of the above villainous characteristics, but simply deserves the opportunity because, right now he’s the second-best motorcycle racer on the planet.