Blog: Time to meet your Maico? 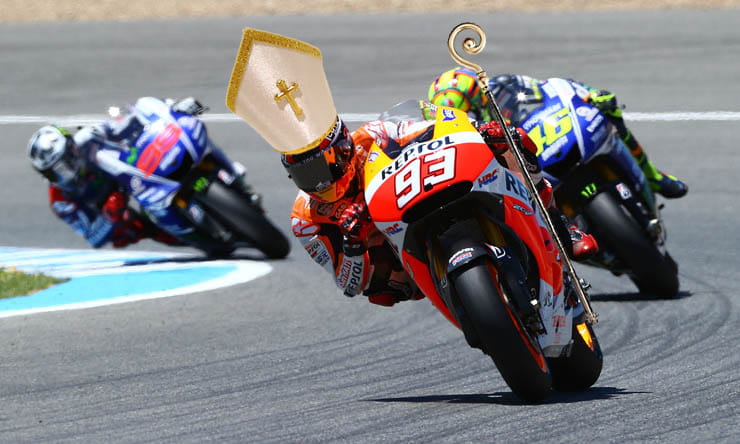 “The big problem,” said the man on the radio, “Is we’ve gone from being a major part of people’s daily lives to a relatively small part of the community.  The average age is in our mid-fifties and there is little or no new blood coming in. If the situation continues like this we will face a serious crisis in a few years’ time.”

Now, I missed the beginning of this conversation and assumed it was some bloke from the Motorcycle Industry Association (MCIA) talking about biking. But, he carried on, “Church attendance has dropped to less than a million people every week and we changed the measurement from Sunday attendance to weekly a few years ago because the numbers were looking so dismal.”

I’ve never been a religious man and realise my views on religion are based on knowing naff-all about it in the same way that most non-riders’ views on motorcycling are based on ignorance and negative propaganda, but it seems that the Christian church and motorcycling are looking at a strangely similar problem. I wonder if they are all becoming ‘adventure Christians’ too.

So I did what works best when I need to think something over and went for a long ride. And I realised there are many other similarities between Christianity and motorcycling. Not just the obvious like dressing up in fancy clothes on Sunday and heading off to congregate somewhere cold and miserable. Or to worship our respective idols (for Christians it’s God, for me it’s the B1225 and the miracle of radial tyres). Not just the fact that we feel the need to make an (ahem) unholy racket while we do it (me: TDR250 on full chat, others: discordant, un-rhythmic bell-clanging) or how we divide up into tiny sub-cults that all mock each other and no one outside of what we do understands what the hell we are on about.

Somehow there’s a more to it than that. Blind faith for one. Religious people have no evidence that their faith has any basis in fact but that doesn’t deter them. I have no guarantee that this won’t be the day I meet someone, riding like me coming the other way, but I believe that it won’t happen to me and that I am invincible.

There are approximately 1.2 million motorcycles currently taxed in the UK and 800,000 people who go to church on a Sunday morning. So, it might look bad for motorcycling, but I’d rather be selling helmets than hymn books right now. The man on the radio talked of making Christianity ‘cool’ for younger people. That sounds like an uphill challenge to me, but the language is all-too-familiar to anyone in the bike trade too. The MCIA (who are mainly middle-aged and whose car park is always conspicuous by the absence of any motorcycles) are wrestling with the same issue. Can anyone think of any occasion when people our age persuaded youngsters that what they did was cool? Apart from smoking and Jeremy Clarkson, I can’t…ever.

There’s a kid on my estate who rides a tatty Kawasaki Ninja 250. It’s knackered and noisy and probably dangerous. He appears to attract nobody else’s interest apart from me – definitely not any of the classy teenage TOWIE-clones smoking outside the One-Stop, but he is the coolest kid around, no question. So maybe, instead of the ‘motorcycling isn’t really dangerous’ message we (me included) are so desperate to present, we should actually promote the thrills and dangers of biking in as graphic a way as possible. I don’t mean severed limbs and ambulances, but what if we pushed the message about a mode of transport where you can treble your resting heart rate and celebrate your mortality every day on the way to work? Why not? It’s the truth. Motorcycling is so bloody thrilling because it can be dangerous and few other things this exciting can be done without trailers, half-day hikes to the mountains, or any other effort than raising the garage door and pressing the start button.

Teenagers seek out risk – look how many still start smoking because it represents a giant ‘screw-you’ to authority around them.

Perhaps what we need is a tie up between the tobacco companies and bike manufacturers. Bring smokey sponsorship back into bike racing and flood the dealers with Marlboro or Rothmans replicas that allow little-Johnny to blat through town, risking everything, in honour of his favourite leafy death stick. Even better, if the dealer could supply them with bald tyres, worn brake pads, no baffles and a blown rear bulb, that would make them even more dangerous. If that doesn’t get more nippers onto motorcycles I don’t know what will.

And while we’re at it, let’s turn the perimeter roads of neglected rural churches into pit bike racetracks, with a teenage rave centre attached. Churches used to have youth clubs as a vain hope of getting love-struck teenagers, woozy after their first snog to connect God with a bit of ‘under-the-jumper’ action, so why not?, Parentally sanctioned all-night dance trance finished off at 10.30 on Sunday morning with a service of forgiveness for the unrivalled hedonism of a Red Bull overdose and getting to third base. The wave of spiritual mass-euphoria should easily dispel the chemical hangovers and everyone goes home feeling wonderful.

No need to thank me archbishop, you can have that one for free.