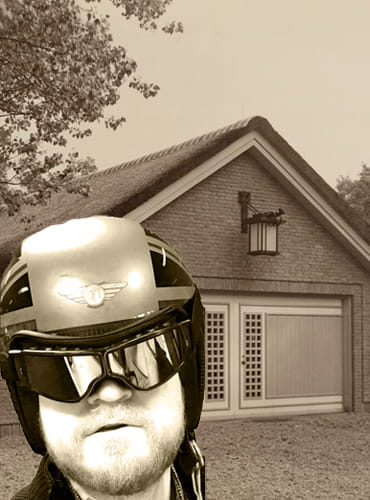 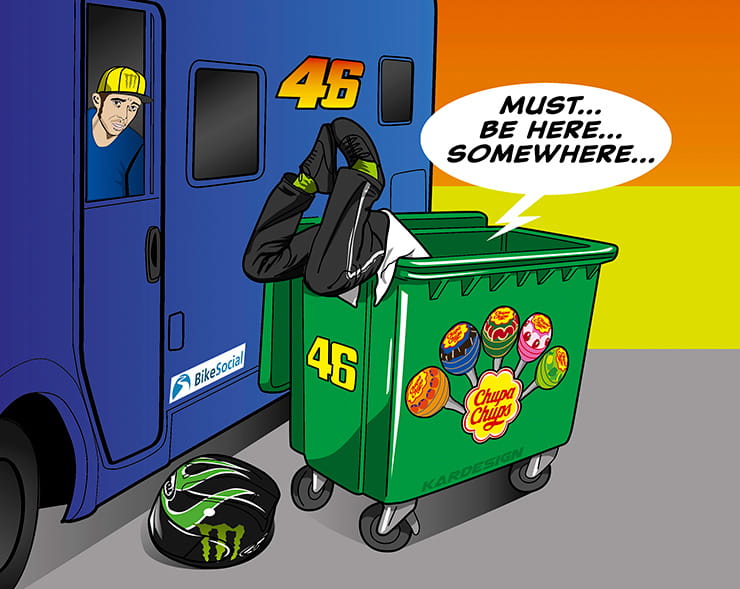 There is something mysterious going on in MotoGP right now and I think you may need to investigate further. At Jerez the other week Father Moraz and myself were taking a short cut through the paddock during the MotoGP race. Father M is a strong man for his age, but he has a weakness for caffeinated energy drinks and their diuretic properties play havoc with his ageing bladder. Anyhow, we were surprised to see a man in an immaculate, white Tuxedo, rummaging in the bins behind the Team VR46 motorhome.

This man looked like a cross between Sean Connery and Cal Crutchlow and just before he disappeared head first into a wheelie bin, we both heard him murmur, ‘I hope this is worth it Mr Puig,’ in a strange accent, seemingly half Scottish, half Coventry.

Intrigued, we stood and watched. A minute or so later this man emerged from the bin holding what appeared to be a lollipop and scurried away towards the Repsol Honda pit.

Now, neither me nor the good Father are the runners we used to be, but we followed this strange fellow and caught up with him behind the Repsol garage. Neither of us could hear the full conversation but it seems that our man dressed as 007 was in fact young Cal in disguise and he was whispering with Marc Marquez’s manager Emilio Alzamora, while waving this lollipop. Alzamora grabbed the sweetie, broke the stick in half and threw it on the floor while shouting non-too-discreetly at Cal, who was starting to cry.

“Look Emilio,” he blubbed. “I’ve done everything you asked. It’s not easy crashing out of every race so early on, just so I can sneak around the motorhomes while no one is there doing your sordid dirty work. People are starting to suspect something.”

We didn’t catch what Emilio said next, but it had something to do with if Cal wanted the Repsol contract for 2019, he’d best just do what he was told and, how they’d never had this problem with Dani and the Pepperamis.

At that point Cal got angry. “I don’t care about your flipping contract and I don’t care about who is bringing the counterfeit Chupa Chups into the paddock. It’s your problem, not mine. I’m not doing your dirty work any more and I’m not crashing again, even if you give me two works contracts and let me sing on the next HRC Christmas single. I’m through.”

And with that he stormed off.

Emilio looked shocked and, as he looked up, the first thing he saw was Father Moraz relieving himself (the poor fella just couldn’t hold it any longer) against Dani’s motorhome. Once he’d stopped laughing, Alzamora asked if Father M could do an impromptu confession and then spilled the beans about what appears to be a bizarre MotoGP version of Alistair Maclean’s novel, ‘The Way to Dusty Death’. In Maclean’s story, a brilliant F1 racing driver appears to lose it and spiral into disarray in order to investigate a drugs cartel in the paddock. Cal, it seems has been instructed to crash early on in the races in order that he can stalk the empty paddocks during the remaining laps, looking for evidence that the VR46 organisation has been smuggling bootleg Chupa Chups lollies into Europe from overseas. Alzamora famously has a long-term relationship with Chupa Chups and is convinced that Team VR46 is looking to play mind games with the Marquez brothers, by getting under the skin of their mentor, flooding the MotoGP circus with counterfeit confectionery.

Following the Argentinian GP earlier this year Emilio marched over to Rossi’s pit and openly accused Vale’s long-term associate Uccio of undercutting the official Chupa Chups vendors, but Uccio, thinking he was wanting to talk about the crash involving Marquez and Vale, waved him away. That was when Alzamora realised he needed a mole in the paddock and race winner Cal’s desire for a seat in the Repsol team gave him the opportunity.

Crutchlow is the only one up to the job because the only person who regularly crashes earlier on in a race is Alex Rins, but he can’t do the 007 accent. Without Cal, it’s unlikely that any of this will ever be proven.

So, Dorna, please do with this information what you will. I hope you find it useful