Could this charging innovation be the moment electric bikes become viable? 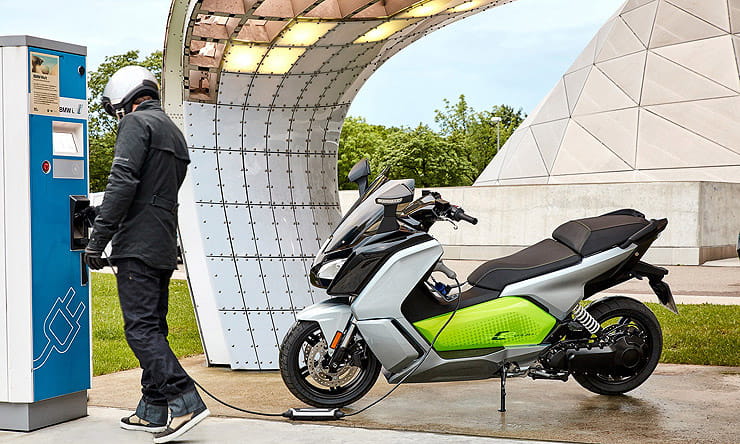 Chatting to a mate in the bike trade at the NEC bike show, the conversation drifted round (as most conversations in the bike industry do these days) to electric bikes. I rolled my eyes (as you do), gave him the usual negatives about range, charge time, hidden costs of producing the batteries, resale values etc etc…you know how it goes.

His response caught me off guard. “What about two stroke engines instead?” Pardon? “How much do you wish we could return to two strokes?” he asked with a weird look in his eye.

“And what about your phone and your laptop and your tablet, should they be two-stroke too?”

Oh, ok, I get it. And yes, he was right. So much of what we use every day is battery powered and most of us learn very quickly how to adapt our lives to manage the constant need to charge.

I tried to argue back how charging an electric motorcycle in the UK requires a lot more cunning and determination than charging a phone, but he pointed out that if we all had to leave the house and travel ten minutes to our nearest Esso mobile phone charging station, we’d be spending a lot less time on our phones. And, of course most phones’ charge lasts a full day.

Flip that around though and the reality of electric vehicles should be how cool it is that we can refuel them at home (unless you live in a tower block) and no longer have to suffer the indignity of highly-carcinogenic petrol splashed on your legs and a bored cashier refusing to serve you with a helmet on. We should be queuing up to join the revolution.

But his next comment was the really interesting one. Apparently, a team of researchers in America has devised a way to reliably and consistently charge a typically-sized electric car battery to 80 per cent – enough to do 200 miles – in just ten minutes, without degrading the performance. And that technology, when it reaches the mass market will solve the both the range and range-anxiety problems at a stroke.

The idea is simple. The challenge in fast-charging Lithium-Ion batteries comes down to temperature management. Fast charging works most efficiently at higher temperatures, which prevents a condition called Lithium plating occurring that damages the battery. Conversely, delivering the battery’s charge to an electric motor needs the cells to be kept cool. What the team from Pennsylvania State University did was build some tech that quickly and reliably heats up the battery during charging and then, uses the vehicle’s cooling system to drop the temperature during running. Because the charging period is so short the build-up of heat doesn’t have time to damage the battery and the team claim to have seen minimal drop-off in performance over 2500 charging and discharging cycles, which is equivalent to half a million miles…ish.

If this project becomes commercial it could change the fortunes of electric vehicles because if you only need ten minutes to charge, then you don’t need anything like as many charging points. Plus, as charging becomes less of an issue, it matters less that your bike only does 100 miles per charge and so batteries can be smaller, lighter and cheaper and the bikes can be smaller, lighter and cheaper too.

This could be it, the biggest revolution in motorised transport since some curious weirdo wondered what happened when you put petrol and some bean cans in a sealed container and set fire to it.

What if it turns out that our generation of riders were not only lucky enough to enjoy two strokes, ShiftCam, EXUP and Desmo, but also the coming-of-age of electricity too?

Like you (probably), I still have some serious reservations about electric vehicles, but this latest development appears to have moved the biggest obstacle to commercialisation forwards. Once we get that sorted the next steps should be the fun ones – and not having to suck on a load of chemical nasties while walking the dog might even allow me to live long enough to get to the bit where we hover above a self-charging glass roadway…or summat.

And then, we can get all nostalgic using our cool-as-floc nostalgic two-stroke iphone H(2) in limited-edition Kawasaki purple. Wouldn’t need any fancy ring tones, just a pair of side exit GP-replica expansion pipes or an iPiper 3-into-1 (you had to be there…) and Samsung boost bottle. Yum.