Blog: Can we talk about progress 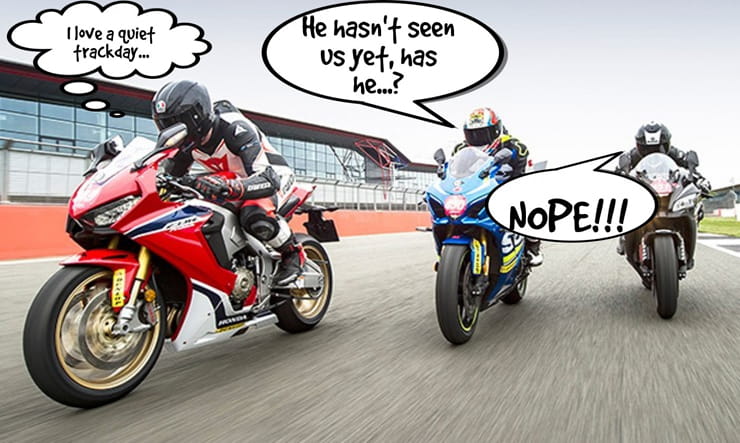 I still remember my mate Craig, aged 21 explaining to a policeman why his full-Yoshi’d (pistons, cams and pipe) Suzuki GS750 didn’t have any mirrors fitted. ‘There’s nothing round here that can keep up,’ he smiled. And he was right. Ducati announced the other day that they are developing radar-controlled systems to alert riders of things behind in their blind spots and stop you getting too close to cars in front.

Which demonstrates that they have absolutely no idea how their customers actually ride.

We’ll ignore the rearward one for now, partly because no one should ever do anything that makes riders feel less need to do a lifesaver, but also because Craig was right then and still right now. Unless you are Marc Marquez on an out lap, there is almost never anything coming up behind you on a bike that you haven’t seen.

Talk to any advanced riding instructor (including most of mine) and they’ll tell you that the one thing all their pupils do is ride too close to the car in front. It’s what we do, even if it is a very bad thing.

We know we are doing it and certainly don’t need a buzzer going off or warning light flashing to alert us. On a bike you know where your front wheel is because you can see it, eighteen inches ahead of your visor

And what happens when filtering? Imagine the spectacle of a half dozen such-nonsense-equipped bikes picking their way between two lanes of stationary cars on the M25, warning lights flashing and buzzers buzzing like Non-Conformist Blankety Blank on Amphetamines. This new radar tech may stop that, but my guess is it will be the tipping point that turns riders against the machines. Because we can talk up our need for TC, anti-wheelie and radical ‘sport’ modes with our pals at the bike meet, even though we never, ever actually actuate them on the road…ever. But anything that really does interfere with our riding will be given the boot immediately.

Can we talk about progress? And what happened to motorcycling in the last fifteen years? Last night I lent Michael my long term test Ducati Multistrada, dragged my 2002 Yamaha Fazer 1000 hack out of the shed and took the long way home to put some juice in the battery and the first dry miles under its tyres since last November.

Now, I’m no luddite, I would actually hug the people that brought us smartphones, ipods, electronic drum kits and sat-navs if I ever met them. And if you make a list of all the ways in which the Ducati is better than my nicely run-in Yamaha, there’s absolutely no contest. The Ducati makes more power, more torque, has more computing power on board than the entire Yamaha factory had back in 2002 (probably), the very latest and most sophisticated fuel-injection, variable valve-timing and fly-by-wire throttle.  There’s more. Cruise control, multi-stage traction control, launch control and cornering ABS. It also has a quickshifter, anti-wheelie technology, a beautiful TFT dashboard, backlit switchgear, top-spec Brembo brakes, keyless ignition and space-age electronically controlled semi-active suspension.

In comparison, my Fazer has 16 year-old carburettors, suspension that wasn’t even state-of-the-art when Yamaha first fitted it to the Thunderace in 1996, a frame made of girders, fly-by-greased-steel cable and the only ABS is the Acrylonitrile Butadiene Styrene - an opaque thermoplastic – that they made the fairing out of.

In every listable parameter, the Multistrada is a (much) better bike. Unfortunately, in the one that matters – how it actually feels to ride – the ancient Yamaha walks all over it. Where the Ducati’s motor stutters on a steady throttle, the Fazer is smooth as silk from 1500rpm through to 11,500rpm in top gear if you must. Where the Ducati’s gearchange is sometimes slick, sometimes not, the Yamaha’s is smooth and consistent, with a cable clutch action giving twice the feel of the Multistrada’s numb hydraulic item.

There’s no fluffed fuelling off the throttle on the Fazer, no need to really pull hard on the brakes before it feels like they’re working, none of the un-natural effort required to make it turn at any speed and no uncertainty from the suspension as you barrel into a corner at high speed. Which is the most surprising part because the suspension is generally considered to be the Fazer 1000’s weak spot.

I enjoyed the 120 twisty miles it took to get the long way home last night more than any other ride this year? Better than the Multistrada by miles on a 37,000 mile, 16 year-old motorcycle that cost me £1600. It has a low seat, bugger-all weight for a 1000cc road bike, a comfortable riding position that also makes it easy to get round corners and headlights that actually light up the road should you take a very long way home.

I understand that things can’t stand still and I know that the demands of marketing mean we have to have better, faster bikes with more gizmos and marketing fluff. And I don’t envy the product planners at motorcycle manufacturers having to convince us that their heavier, taller, ever-more restricted, confused-about-their-purpose 150bhp, knobbly-tyred monster trucks are really worth the price of a small, northern terraced house. You can’t argue that the latest enormous trail bikes are immeasurably better than the old enormous trail bikes, it’s just that I never wanted an enormous trail bike. So please stop pushing the new ones on me as if this is the only future.

And I know it isn’t all in the manufacturer’s control. Increasingly stringent emissions laws mean fuelling has to be compromised to produce exhaust gasses so pure you feed them to kittens and the additional mass of the tech that does this is like riding round with 25kg of rubble in your belly pan. ABS is a legal requirement and if you’re fitting the wheel-speed sensors for that, then why not add traction control and anti-wheelie too. I get it, I really do, but somewhere along the line we forgot that motorbikes are supposed to be small, nimble, light and easy to manage.

On a road test a few years back I remember setting off from a coffee stop not seeing the other riders in my mirrors for miles. Turned out by the time they’d chosen their riding mode, selected the appropriate TC setting for the light drizzle and set up their Bluetooth comms, I was already in the next county. I took it as a kind of victory and, if MotoGP goes the same way maybe I can still make world champion one day on my big, silver Yamaha.