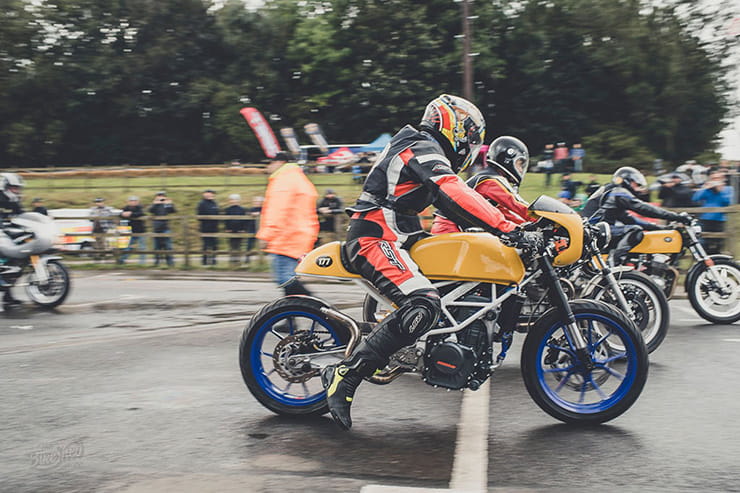 The Ton-Up Club has a new home and a new generation of members. The place is Lydden Hill and name is The Bike Shed Motorcycle Club (BSMC). The term café racer originated in the 1950s, when bikers used transport caffs as starting and finishing points for unofficial road races. Legend has it they’d put a record on the jukebox at the Ace Café and had to ride to Hanger Lane and back before the song ended.

Sadly, the invention of progressive rock in the 1970s, with songs lasting twenty minutes and more (not including the flute and harp intermezzo) meant that your gran could complete the challenge on her Puch Maxi and the café racer died.

Thrash forward fifty years. The new subculture of fast custom flat track and café racers emerged just at the moment that London imposed 20mph limits everywhere. What’s a young man (or gran) with a full tank of hormones and Brat-style Puch to do? Last year BikeShed London ran their inaugural one-day BikeShed Café Racer Cup at Lydden Hill. This year they added an extra day and BikeSocial was invited.

The modern bikes had to be (re)styled like a typical café racer. Take your pick from low clip on handlebars, large racing petrol tanks a single racing seat, swept-back exhaust pipes, with or without half or full race fairings. Modern suspension, brakes, rubber and electronics are allowed. We were asked to leave our race rep leathers and helmets at home, have a rummage in the loft and dig out the ancient heifers. 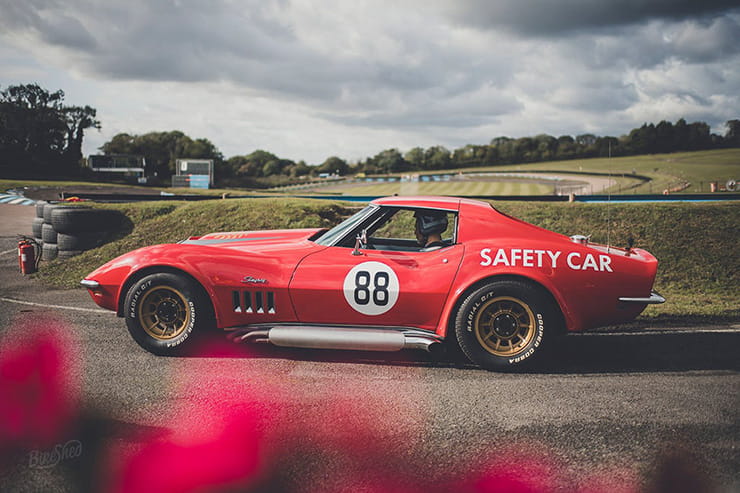 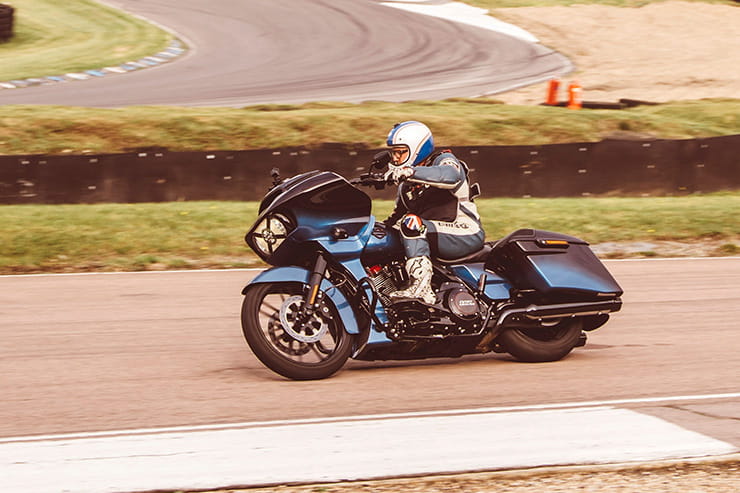 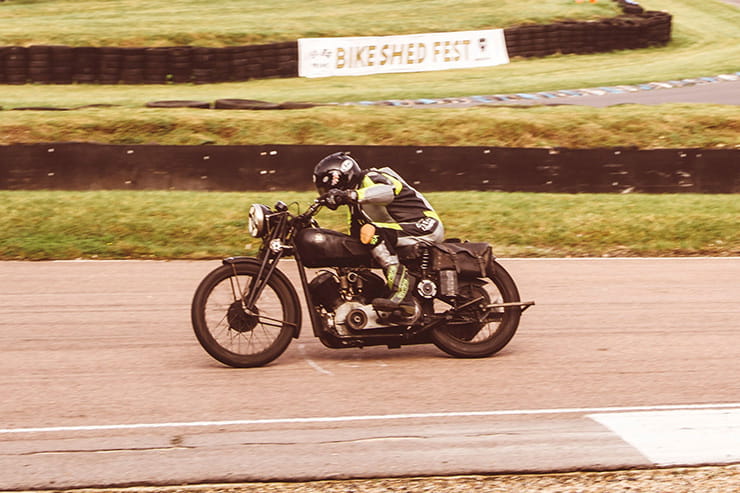 It’s a race meeting, but not as we know it

Last year one rider bought a Ducati SS especially for this event but crashed it the week before. A visit to A&E inbetween calls to spares suppliers confirmed he had broken wrists but he persuaded the doc to postpone the plaster casts till after race day. This year was no different, a rider entered on his hardtail Harley Davidson chopper had only just left hospital with a broken collar bone, ten broken ribs, and collapsed lung from a flat track racing incident. I saw him changing down his suicide shift into the left turn with his foot out flat track style with the biggest smile on his face. Later in the paddock the arm sling was back on and the smile still there. 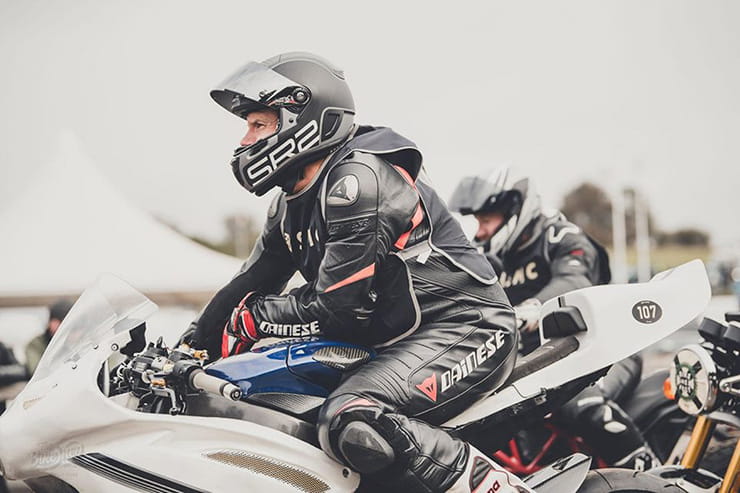 My donor bike was a Yamaha R6. With no fibreglass experience my first challenge was to build a classic looking half fairing with a round headlight from the angular sharp edged full fairing with its large ram air duct. I also had to make a single café racer style seat.

I started by cutting the angles off the fairing, quickly realised I should’ve blocked off the ram air duct and spent half the following day cleaning the dust from the air box. To create the round front fairing I bought a plastic football, a number of plastic mixing bowls and tried them all for size. In the end I settled for a large aluminium foil cooking tray. I could bend and shape the foil, putting layers of gaffer tape over the foil.  Then I overlaid the mould with fibreglass. 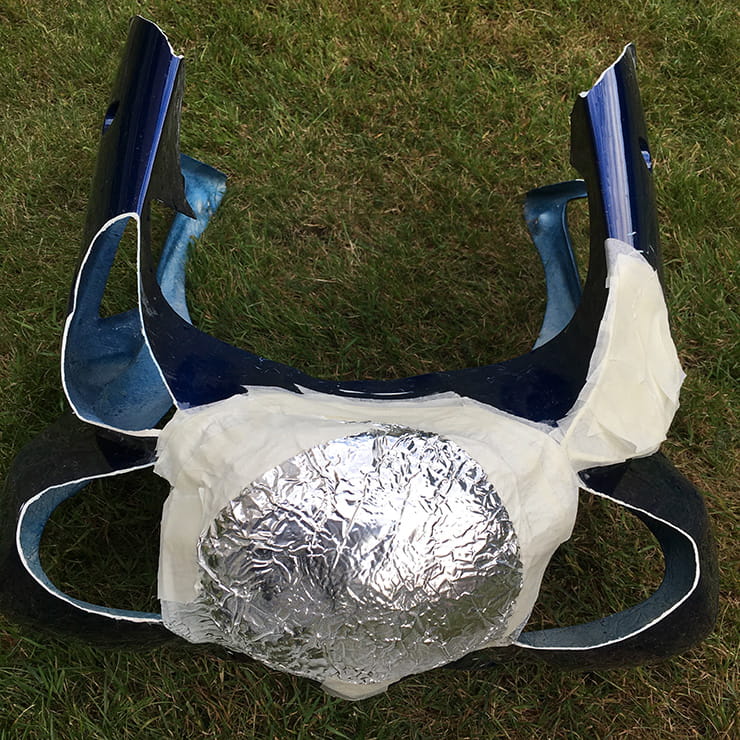 If MotoGP bikes were built in Watford…

Once the glass was set I cut a circular hole in the nose to house a metal mesh and the ram air. I then started with the body filler and days of sanding. Then a second layer of filler followed by more sanding. Paint was also a challenge. I am never going to be a painter... or a tree restorer.

I built the seat unit from a cardboard template and used sheet metal to build the framework that would sit on the subframe.

After many trips to DIY stores, hundreds of pounds, cuts, bruises and more cuts, I had a bike that looked nothing like I imagined it would. No one will ever hire me as a bike builder, but a test ride confirmed it was very fast. 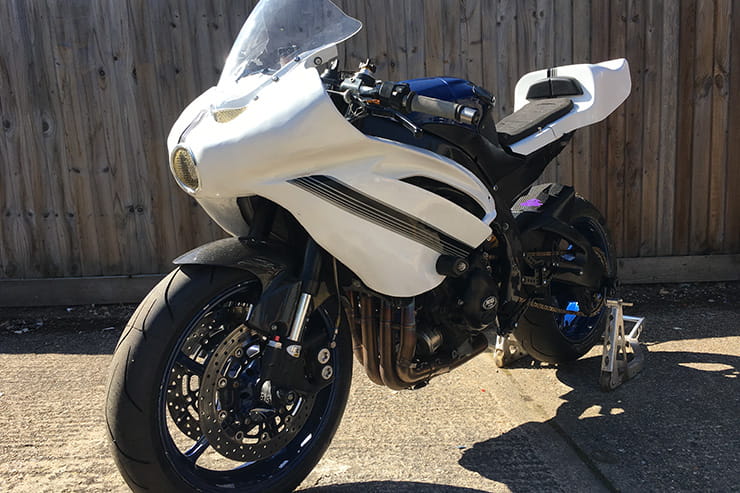 At this point, victory seemed assured

Sadly, the Yamaha only survived one sighting lap before eating its gearbox. On a positive note, this gives me all year to improve the bike before next year’s festival and get some professional help with my styling efforts. 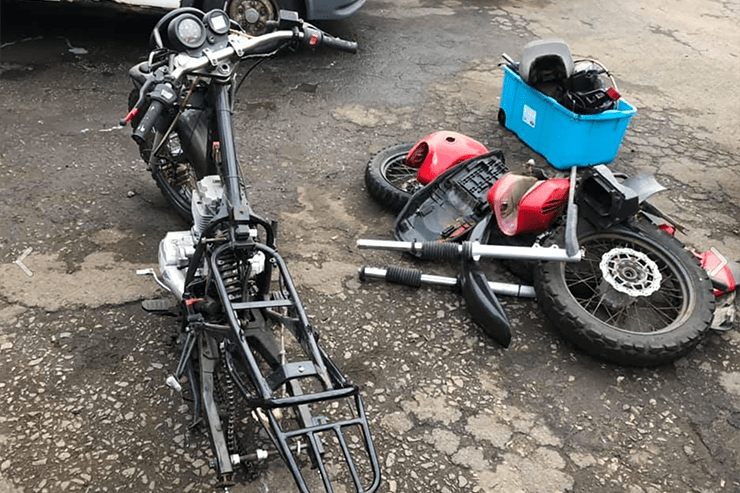 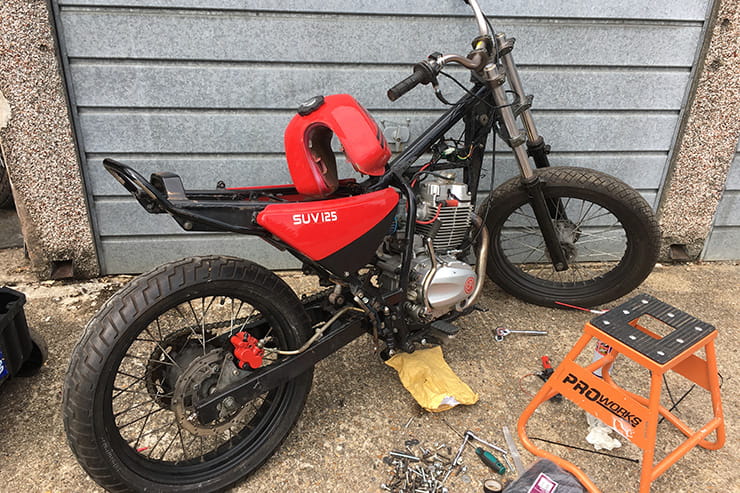 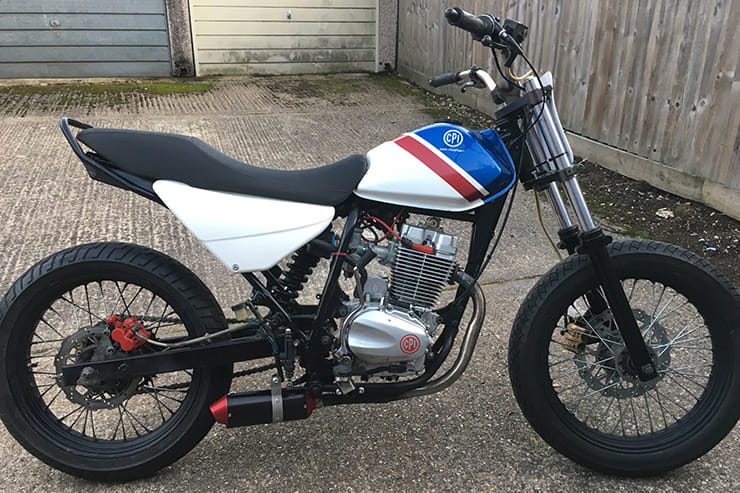 Slower than the R6, only a small oil leak, but it lasted eight times longer

Thankfully, a couple of weeks before BikeShed I’d also bought a Chinese CPI 125cc bike in a box. This was going to be a mini project flat track bike. I had far more success building this bike than my café racer and decided to take it along to Lydden as a paddock bike. Once there though I couldn’t resist the temptation to run the little bike out for the 125cc practice session and it was fun - sitting on the back seat lying on the tank in a full tuck. Hunting the little bikes ahead was epic.

So, with the R6 out of action, I decided to race the 125. And it was a gas. There might have been a slight oil leak, there was definitely an epic battle with a Honda C90 and never has 7th place (or was it 8th?) felt so well-earned.

Bike Shed was brilliant and next year it will be even better. See you there?