Motorcyclists less annoying than 86% of other road users 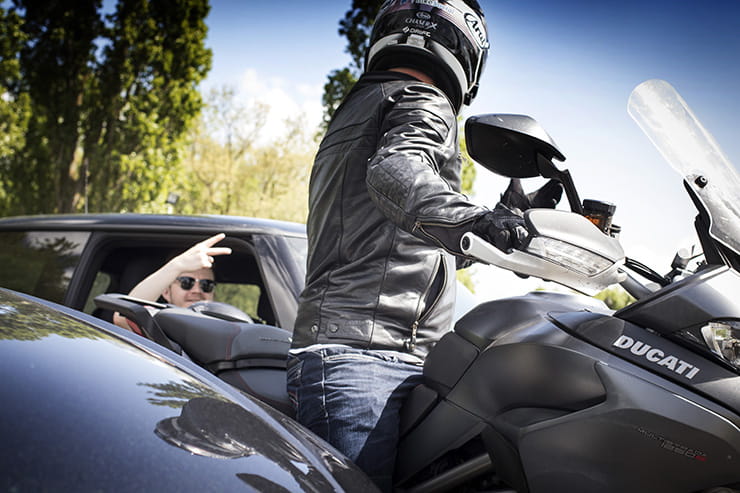 Elderly and young male drivers, lorries and taxis are all more annoying than bikes, according to a survey of 1,023 licensed UK car drivers by personal number plate specialist Click4Reg.co.uk.

Perhaps love is too strong a word though, as the survey found that buses, vans, coaches and young female drivers were all preferable to us on two wheels. Still, 2% of respondents also said they found emergency vehicles irritating. Selfish?

Click4Reg’s research initially looked at what car drivers find most annoying. Needless to say, us bikers aren’t guilty of ANY of these (much), but it’s interesting to see what gets under the skin of cagers…

If anything, the data proves you can’t please everyone all of the time, with 41% of people annoyed by too slow driving, but another 25% vexed by others going too fast.

Perhaps the research helps explain why motorcyclists only wind up 14% of drivers – our indicators are usually left on more than they’re off. Our headlights seem to annoy some people but at least we’re probably not often accused of being 10mph under the speed limit. Tailgating? Hmmm, maybe occasionally but blame those middle-lane hoggers.

Last minute lane merging and switching is – hopefully – not much of an issue for UK drivers as motorcycles will soon have filtered away. My experience is that the vast majority of drivers in Britain are okay with a bike nipping through traffic, especially if you take the time to give a little wave. Let’s think ourselves lucky that we don’t ride in the intolerant, gun-happy United States.

Bad parking’s not an issue with bikes, but speeding and discourteous driving might be something that some non-riders accuse us of; usually through a lack of understanding though. Sudden braking and middle-lane hogging? Not us.

Elderly drivers are considered the most irritating on our roads – ironically more so than the 17 to 18 year-old males that are more likely to cause an accident. Click4Reg questions whether the same 41% of people who found it annoying being stuck behind a driver at 10mph under the limit are the same 41% who voted for the elderly.

While young women drivers are said to be less perplexing than young men, they’re still a relatively high accident/offence risk, though interestingly 34% of women respondents found lorry drivers got their goat, while truckers only boil the piss of 18% of men. Either way, everybody seems to hate lorries more than motorcycles, so filtering through a traffic jam of trucks shouldn’t upset anyone…