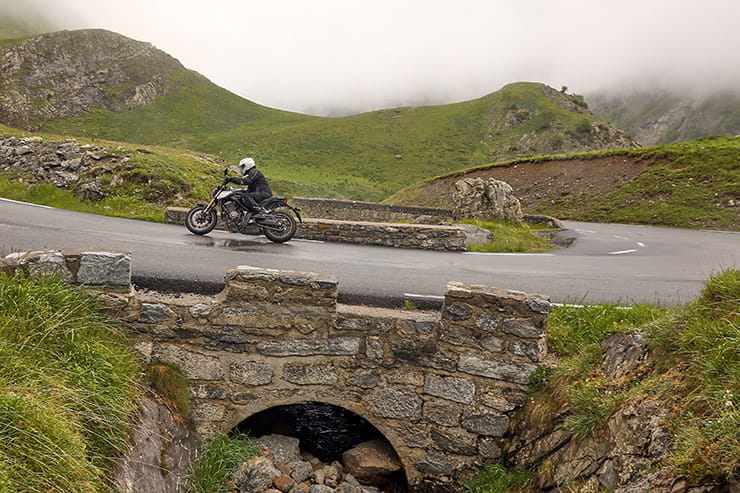 Spain. Definitely not ‘the plain’, but boy is it raining. On paper, riding from Barcelona to Biarritz on naked CB Hondas in June seemed like the perfect road trip. Sadly, no one told El-Met Office.

Not that it really matters. The wonders of modern bike kit, the genius of Metzeler’s staggeringly-good-in-the-wet Roadtec tyres and the simple ease-of-use of Honda’s ‘definitely-should-consider-one’ CB650R are working together to make this trip enjoyable, memorable and surprisingly fast-paced too.

The bit about the pace is my fault. Rule number one when riding in groups is keep the group together. Rule two is make sure that everyone knows the route and the stopping points. On this trip I ignored both of them, so when I took too long taking photos and got split up from the group of 15 other riders I spent a good half hour wondering

The second one is the most interesting. Assuming they were averaging 60mph they had a five mile head start on me. That means I’d need to average one mile per minute (60mph) quicker them to catch them in five minutes, half a mile per minute (30mph) quicker to catch them in ten minutes and 15mph quicker to catch them in 20 minutes. If you’ve ever got as hung up as I do about average speeds you’ll know that simply averaging 60mph is hard enough. So to average 75mph for 20 minutes is almost impossible on an open road. Fortunately, I like riding in the wet. 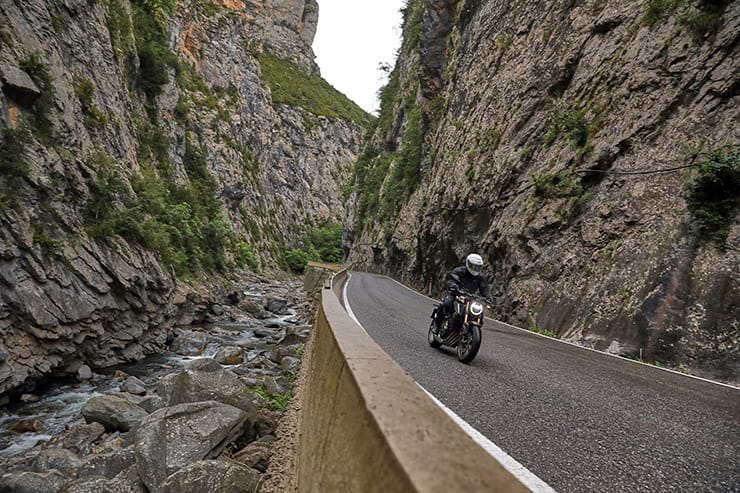 What followed was fourteen minutes of blind faith in a very good motorcycle, excellent tyres and that someone else will pick up El-speeding tickets. These were fast roads, like a sweeping British A-road, which made it easy because I could see a long way ahead, plot a line, use more road, less adrenaline and the top third of the CB650’s rev range. Swapping between third and fourth gear, somewhere around 10,000rpm feels very fast but, in reality, is peaking around 100mph. At one point I see the group in the distance but progress is thwarted by a shepherd, closing the road while moving what seemed like 1000 sheep slowly across the mountain. One of those moments when the crazed Metallica soundtrack in your riding mind swaps to supermarket muzak for three minutes till they’ve gone. At which point, I’d lost all the ground I made up, requiring another 15 minutes of challenging riding and the lucky coincidence that the group decided to stop for a break in a very visible car park. 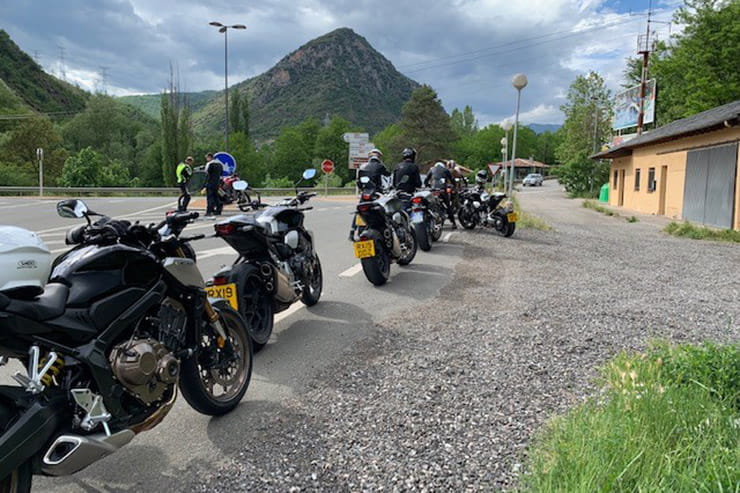 Mountains – mostly up, till you get to the top and then they tend to fall away sharply…

The tingling in my fingers from the 50 miles of motorway that started our ride has long since disappeared. Replaced by a tingling in my remorse-gland after riding in a manner unbecoming of a ‘manager in insurance’, which is how I describe myself on the proposal form these days.

The other rule of riding in groups is ‘always put the fast riders at the back’. Which sounds counter-intuitive, but when there’s traffic to pass it’s all too easy to get spread out. If the slower riders are at the back, by the time the tail-enders get past, the riders at the front will have already passed two more sets of cars and the whole group is strung out over a mile or more.  And that’s when people (people like me, in fact) get lost.

This trip (organised by Honda) was on CB650R and CB1000Rs. I like the CB650R. It’s a simple bike with all the right ingredients to just enjoy the ride. The riding position works whether tooling around in town or head-down, goolz-out giggles. It steers like you hoped it would, soaks up bumps and stays controlled in the corners. There’s as much confidence in the brakes and suspension in the wet as the dry and the engine is so flexible you can leave it in third gear on pretty much any road, ever and not run out of drive. 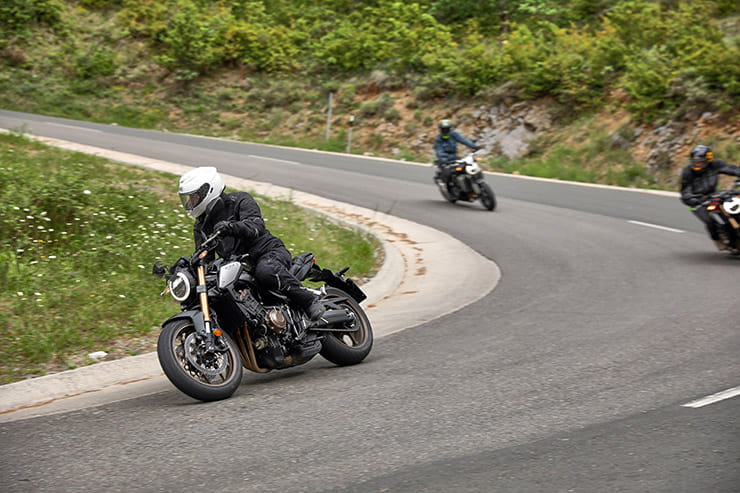 Riding in groups; fun , once you’ve sorted out the rules

That ease-of-use is something that every owner of pretty-much every Honda CB ever made will recognise. It’s in the DNA and, while some people might also call it boring, I’d argue that when a bike is this effective, this capable and this easy to ride in these very difficult conditions, it allows you, the rider, to get on with enjoying the challenge of the road or the view, or both.

The only time I’d prefer the CB1000Rs in our pack is when the going gets really twisty in the Pyrenees and their fancy torquey, former-Fireblade motors are pulling 10 metres on me out of every blind ‘stopping-to-almost-zero’ hairpin.

Day two, high up in the Pyrenees begins with an observation that the mountain outside our hotel didn’t have snow on it when we went to bed. Ambient temperature is about four degrees and rain/sleet is forecast for the 250 miles we have to ride today.

The pace is more relaxed than yesterday. The Italian, Benelux and Dutch journalists are riding in jeans, trainers and fake-patina’d hipster helmets while the Brits are pretty much in full winter gear.

Look hard and you’ll see a teeny, tiny CB650R ripping up the Pyrenees

It’s more of the same from yesterday – endless hairpins going up a mountain followed by endless hairpins coming down. Apart from one section where road works mean a half-mile stretch of deep gravel, even-deeper puddles, even-deeper-than-the-puddles ruts and half a dozen hairpins to negotiate with said surfaces, the ride is easy, entertaining and as enjoyable as you’d expect.

And that is essential-rule-number-four of group riding; give the group time to settle-in and learn how each other rides. Today everyone knows who likes to ride quicker than who. No one gets lost apart the Italian journo who always gets lost and everything works as it should.

Arse ache sets in by the 200 mile mark, mainly because the last 60 miles have been slowed by heavy traffic that we need to sit behind or risk getting separated. The CB’s engine works well in traffic – nippy enough to er, nip past when the time is right. And the wide bars, slick controls and lack of bulk make flicking in and out of a French rush hour a lot easier than you’d think. 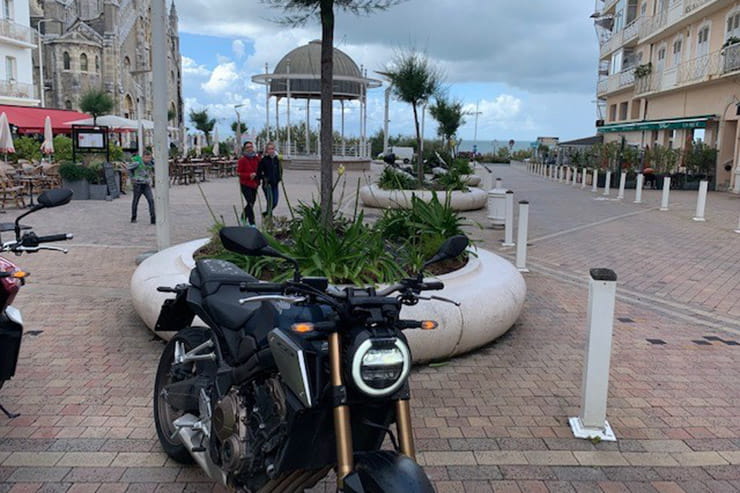 By the time we reach Biarritz, after 500 challenging-but-brilliant miles in two days our group is a well-oiled machine (or at least we will be after the first couple of pints).

And of course, the reason why we do this – the one great thing about riding in groups is that you have a ready-made bunch of new mates to share the experience with over beer and dinner. Being in a group is worth all the challenges of riding in a group. Patience is a virtue and today, the CB650R is my new favourite bike.