What is the speed limit in the UK 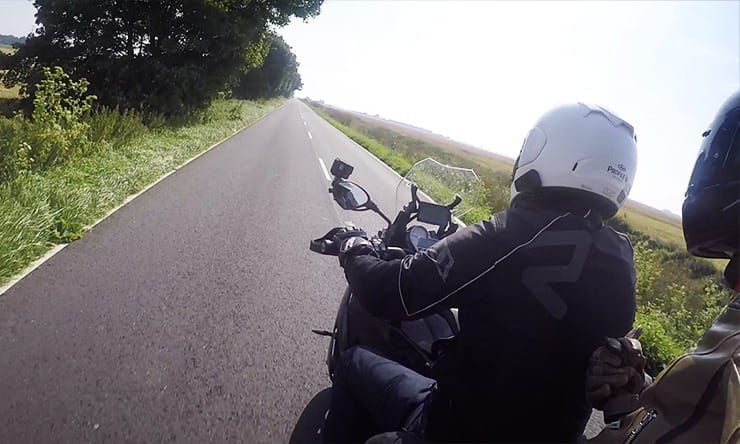 Clear roads ahead, but what’s the speed limit?!

If you’ve ever wondered what the speed limit is on any road in the UK – if you’ve ever been unsure whether you should be doing 30mph or 40mph, or if two lanes means 60mph or 70mph – there’s a very easy way to know…

If there ARE street lights, it’s 30mph, unless signs say otherwise 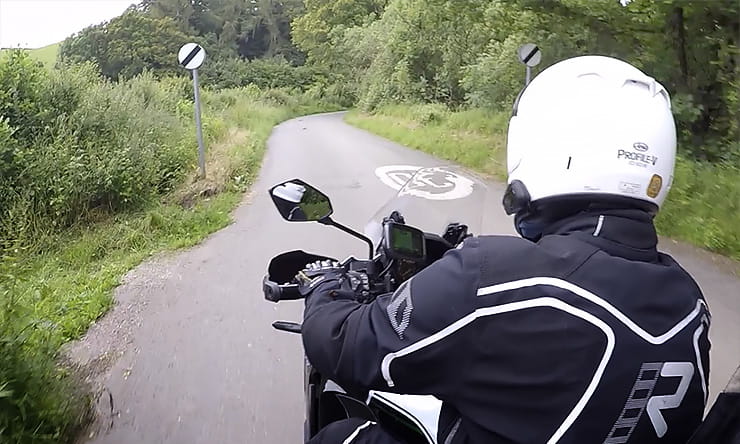 National speed limit applies, but do you know what it is on this tight little country lane?

What is the National Speed Limit?

To make more sense of NSL=NSL, we need to know what the UK national speed limit – represented by a white circle with a black diagonal slash – actually is:

* The Highway Code states that the 30mph limit usually applies to all traffic on all roads with street lighting unless signs show otherwise.

† 60mph is articulated or towing a trailer

What is a single and a dual-carriageway?

The easy way to know what type of road you’re riding or driving is to imagine removing all the paint; if you’re left with one stretch of tarmac, it’s a single carriageway, regardless of how many lanes there are.

Another way is to consider whether you could roll a tennis ball across the entire width; if you can’t because it’s getting stopped by a barrier of some sort (that includes those horrible wire barriers) or a separate section of ground (like a grass verge) then it’s a dual carriageway. 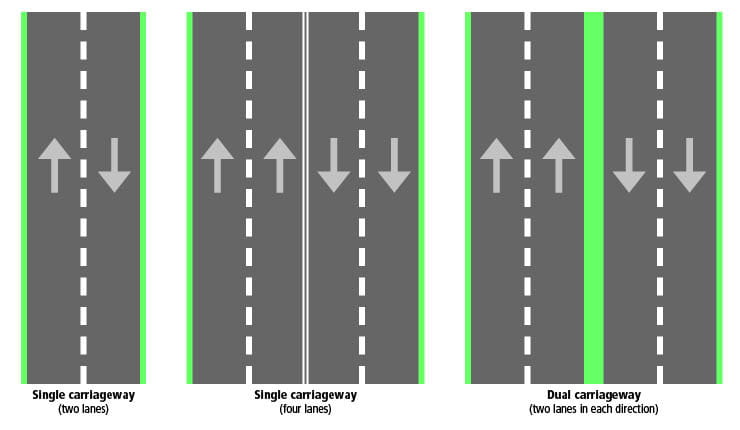 So what about street lights?

Since 18 March 1935, the UK has had a blanket rule of 30mph on roads with street lighting, unless signs tell you otherwise. If there are no street lights, then the National Speed Limit applies; on a motorcycle or in a car that isn’t towing, that’s 60mph on a single-carriageway and 70mph on a dual-carriageway or motorway. Unless signs tell you otherwise.

So, if you’re on a dual-carriageway with street lights on, unless there are National Speed Limit signs (or any others), the limit is 30mph. This will typically be in a built-up area.

Equally, you could be riding or driving past a large number of buildings, but if there are no street lights and no signs to tell you otherwise, the limit will be 60mph if it’s a single-carriageway and 70mph if it’s a dual-carriageway (we’re still assuming you’re not in a van or truck, and that you’re not towing). 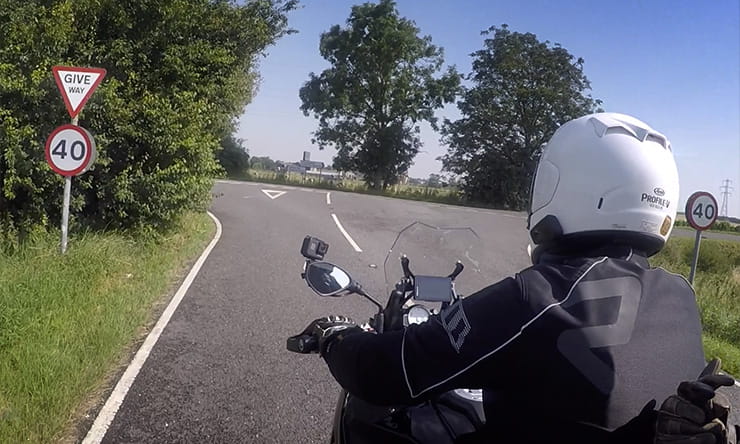 Where are the speed limit signs?

There are two main types of speed limit-signs – gateway and repeater.

You’ll find gateway sings on both sides of the carriageway (so either side of the road on a single-carriageway, and either side of both lanes on a dual-carriageway). These are the big round signs that tell you the speed limit has changed.

After that, you’ll see repeaters, which are the smaller round signs that alternate between the left and the right of the carriageway.

Of course, there are also other types of speed limit signs (for instance at road works), advisory limit signs and the illuminated signs on gantries. If you’re on a multi-lane carriageway, the gantry signs will show the same speed across every lane because there legally cannot be a difference. If one of the signs isn’t illuminated it doesn’t mean there’s no restriction there; it just means it’s broken. 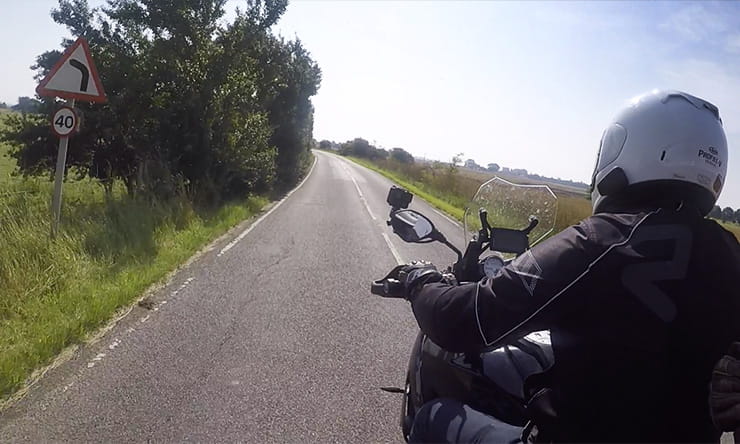 Repeaters are smaller, and alternate between either side of the carriageway

What about 20mph speed limits?

If the sign is a red circle with a black number on a white background, it’s giving an order. It’s the law. You might see an advisory sign, for instance one that says ‘20mph when flashing lights show’ near a school; if you ignore this (perhaps because you think the lights have been left on by mistake) and you’re involved in an incident, you’ll be in big trouble in court.

20mph limits aren’t a new thing – in 1903 the Motor Car act said that all vehicles mustn’t exceed 20mph on any roads. In 1930 that was repealed for light vehicles, but the number of deaths meant 30mph was brought back for all roads in 1934, then just built-up areas (denoted by street lights) in 1935. 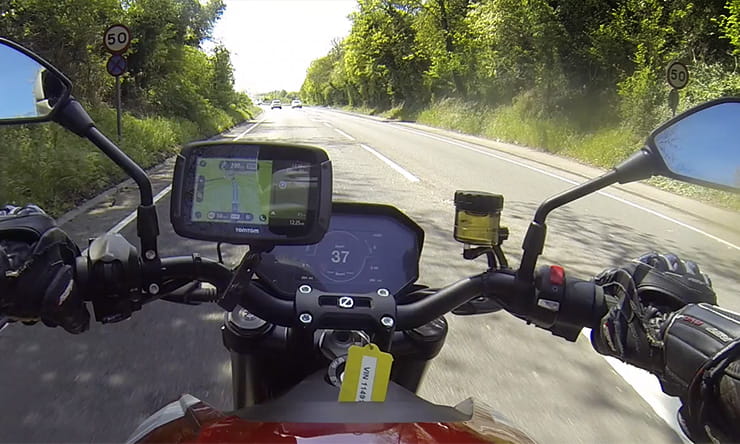 Why do speed limits change on some roads?

Some of your favourite sections of single carriageways (with no traffic lights) might have suddenly sprouted 50mph signs. Or some town roads you’re used to cruising though at 30mph have inexplicably dropped to 20mph. There’s a simple reason for this; the area has been determined to be at a high risk of accidents (incidents, technically, as there’s always a reason).

Why are some speed limits painted on the road?

More paint = more pain. If a council has put its hand in its pocket to lash out on clearer signage, it means there’s a good reason that it wants you to know there’s a speed limit or hazard coming up. Paint on the road might be there to make sure a sign hasn’t been hidden by parked vehicles or overhanging trees, but the more warnings there are, the more danger there is. Though don’t get too reliant on this – one county might be particularly efficient in giving plenty of warning of dangers on the road, while the next might be run by a council that’s blown all its budget on vol-au-vents and floating duck islands. A safe speed is down to you.

Which brings us to arguably the most important rule in the Highway Code… Number 126: Drive at a speed that will allow you to stop within the distance you can see to be clear.