Stolen number plates: The law and what to do if yours is cloned 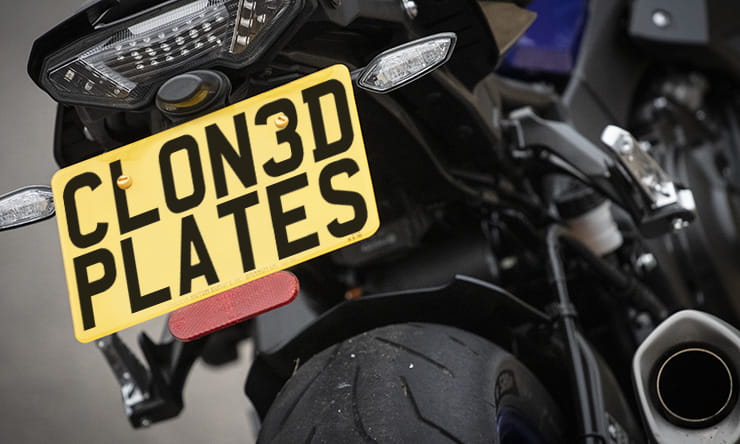 29,256 vehicle registration plates were revealed to have been stolen in just one year, which goes some way to explaining why a surprising number of law-abiding riders and drivers have been accused of offences they didn’t commit, in places they were nowhere near at the time. BikeSocial explains what to do if you think your number plate has been cloned, and what the law is for registrations in the UK.

BikeSocial’s vehicle crime consultant and ex-Flying Squad officer, Dr Ken German, told us that the report, which was put together after a freedom of information request by the AA, did not include the number plates obtained illegally from unauthorised manufacturers (using the registration of a legitimate vehicle), or the registration plates that were simply altered to deceive. A very conservative estimate would easily treble the number of vehicles displaying ‘wrong’ plates on the road, to around 90,000 vehicles.

This request was not vehicle specific, but Dr German says that a conservative estimate suggests there are around 10,000 motorcycles and mopeds on our roads with false plates right now.

“Nearly 80% of all crimes in the UK involve a vehicle in some respect,” says Dr German, “even if it simply transports the criminals to and from the scene of a crime, which of course can range from burglary, robbery and assault, to evading a parking charge, a speeding ticket and – more common perhaps – allowing uninsured and untaxed rogue drivers to have any offence notice they incur sent to the real registered owner.

“Clearly, with so many CCTV and ANPR cameras around, today’s criminals often need to hide their vehicles in plain sight using the existing identity of a similar motorcycle or car, so they won’t be placed at the scene of a crime.

“Many examples of cameras recording the registration number of vehicles speeding at 100mph on the M6 in Birmingham for instance, are later discovered to belong to a farm tractor in Cornwall or a bus in Dundee!

“These anomalies, where a vehicle clearly on false plates has passed an ANPR camera, are usually noted on the police national computer (PNC) as illegal activity, and should that vehicle be subsequently stopped then all of the sightings would be collated, the rider/driver interviewed, and if responsible, dealt with accordingly.”


What if someone steals your license plate?

It’s very important that anyone who loses a number plate – whether it’s clearly been stolen, or you think it could have fallen off – contacts the police immediately. “This could help should a summons, parking or speeding fine be received later,” says Dr Ken German. “In that event, the correspondence received should be returned to the sender with a covering letter providing them with any documentary evidence that may be required to prove the case. Evidence could include proof of your location at the time of the incident, as well as clear photographs of your bike or car, showing all sides and the number plate itself, with the manufacturer’s details – most photographs taken by ANPR and other roadside cameras are of good enough quality now to identify small differences such as damage, alterations, stickers etc, and have been found ideal to establish your innocence. Or prove your guilt.

“It is also important to write to the DVLA address at DVLA, Swansea SA99 1ZZ, regarding the circumstances of the wrongful allegation, so a record will be kept for future reference.

“It remains the responsibility of a vehicle’s registered keeper to satisfy the issuer of any offence notice that it was not them – or their vehicle – at the time and place where the alleged offence occurred.”

How do I know if someone’s cloned my number plate?

Criminals will generally look for a bike or car of the same model and colour as the one they have, then get a number plate made to match it.

Unfortunately, the first you’re likely to hear of your number plate being cloned is when you receive a fine or notice of intended prosecution. Again, you’ll need to write to the issuer with any evidence showing that it couldn’t have been you.

How do I stop my number plate being cloned or stolen?

If you’re selling your bike, it’s worth covering the number plate as it’s an easy way for crooks to find the machines they’re looking for. BikeSocial’s own publisher was the victim of registration cloning after his bike appeared in a magazine he used to work for.

There’s not much you can do to prevent it being stolen, besides making sure the bike or car is clearly visible to others (so someone tampering with it is obvious), or not easily accessible, and that the plates are well secured, perhaps by using security screws.

How do I know if the bike or car I’m buying has a cloned or stolen number plate?

It’s more likely that cloned or stolen plates will be used on vehicles in criminal activities like robberies, or to avoid prosecution through speeding etc, but ringing does still happen, so as always, carefully check the frame/chassis and engine numbers of any bike or car you’re buying against the V5 to make sure it’s what it says it is.

What’s the fine for a false number plate?

Riding a bike or driving a car with a stolen or cloned number plate is fraud, and could lead to anything from a community order to a substantial fine and a prison sentence. Disqualification from riding or driving, as well as having your vehicle seized are additional possibilities.

Where can I buy number plates without documents?

The law demands that legally-obtained registration plates should be purchased from an authorised dealer or legitimate outlet only – a Registered Number Plate Supplier (RNPS). You can find details of legal suppliers at www.gov.uk/displaying-number-plates.

The RNPS will need to confirm your name and address, as well as your entitlement to the registration number by producing at least one document from each of the three lists below (all documents must be originals):

• Letter of authorisation from a fleet operator, lease company or hire company (the letter must quote the document reference number from the V5C, not the vehicle identification number).

Document confirming your name and address

• Driving licence, with or without a photo, whether or not it was issued in the United Kingdom

• National identity card issued by the government of a state or territory other than the United Kingdom.

Document to confirm your name only

• Passport (whether or not it was issued in the United Kingdom)

Car and motorcycle thieves simply make their own false registration plates using details copied from similar vehicles observed on the road and online, and it’s only if or when these cloned vehicles are stopped by the police in suspicious circumstances, that the fake plates and previous activities of the vehicle are found.

There’s also the availability of so-called ‘show plates’, which are offered on the pretence of being only for use off the road. However, some sellers will still include a British Standards number, and make sure the number plate looks correct for use on the highway, while only asking for the address at which the payment card is registered. We’ve contacted the DVLA to ask why this loop hole exists, but have yet to receive a comment.

What number plates are legal?

Legally, manufactured number plates must have the details of the plate’s manufacturer, or a dealer’s name on them. The theft of these originals is favoured by criminals wishing to clone expensive vehicles in order to cloak them with some authenticity, as opposed to those using vehicles simply to commit crime.

Any UK vehicle’s number plates must:

• Be made of a reflective material

• Not have a patterned background

Do motorbikes have front number plates?

Motorcycles and motor tricycles registered before 1 September 2001 are allowed to display a front number plate, but it’s not a requirement. Those registered after this date must ONLY show a plate on the rear, so no, you can’t convert your new Triumph to a retro-look with a front plate.

Quads do have to display plates at the front and rear; if they make less than 20bhp, and have a maximum un-laden weight of 400kg (550kg if it’s a goods vehicle), the plates can meet the spec of motorcycles, otherwise they have to be the same as car plates.

Are black and white number plates legal on my classic bike?

• Have applied to the DVLA

• Have registered the vehicle in the ‘Historic Vehicles’ tax class.

Motorcycles and cars built 40 or more years ago (it rolls forward on the 1 April each year) are exempt from vehicle tax.

It is illegal to have black and white number plates on a vehicle that was built after 1978.

Characters on a number plate are allowed to be 3D, but they must be the correct size on the correct material.

What is the standard size of a number plate?

The British Standard number BS AU 145d, which should be displayed on all number plates (along with the postcode and name, trademark or other way of identifying the manufacturer, spells out the specification for all number plates.

On all motorcycles registered on or after 1 January 1973, the characters on the number plate must run over two lines. Tricycles made from four-wheeled vehicle bodies need to use car-style number plates, while trikes based on a motorcycle use bike number plates.

• Characters must be 64mm tall

• The space between characters must be 10mm

• The margins at the top, bottom and side of the plate must be at least 11mm

• The vertical space between the age identifier and the random numbers must be 13mm.

Motorcycle plates use smaller characters than those on cars…

• Characters must be 79mm tall

• Character stroke (the thickness of the black print) must be 14mm

• Space between characters must be 11mm

• Margins at the top, bottom and side of the plate must be 11mm

• Vertical space between the age identifier and the random letters must be 19mm.

For more information on the rules for number plates, click here.

Can I put my own logo or flag on the number plate?

According to the law, you can have the number plate without a logo, or with the European symbol. You can also have the Union Flag, St George’s Cross, Scottish Saltire or red dragon of Wales. You can NOT put a random logo on, or any other flag, and while a plate with the Union Flag and ‘GB’ on will be legal overseas, you still need to use a GB sticker when travelling. For more information, click here.

What’s the fine for an illegal number plate?

If your number plate is too small, or in some other way doesn’t meet the requirements of the current British Standard, you could face a fine of up to £1,000 and three points on your licence.

What do the letters on a number plate mean?

The current registration format was introduced on 1 September 2001. The first two letters are a ‘DVLA memory tag’, which gives the location the vehicle was registered. The next two digits are the numbers that represent the age, while the final three are random. Q plates are still available, but you’ll never find a ‘Q’ or an ‘I’ or a ‘Z’ in the memory tag, and you’ll only find ‘Z’ in the random letters.

What year is a reg?

The new age identifier system runs from its inception in 2001, and will continue until all possible variations have been used…