Road Safety: How good is YOUR hazard perception? 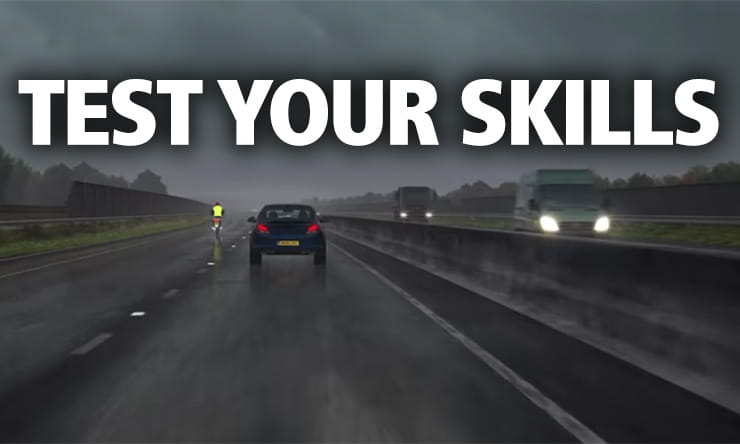 From December 2018, prospective motorcyclists will watch 14 video clips that test their ability to spot ‘developing hazards.’

The clips, which are already in the car theory test, now include scenarios such as driving in fog, rain, snow and ice, and wind. New clips also cover driving at night and in low-light conditions, such as at dawn and dusk.

Points are awarded for spotting the developing hazards as soon as they start to happen, but the way the test is scored, and the overall pass mark is not changing. Viewers simply click a button as soon as they see a hazard starting to develop, with a maximum of five points per hazard. But don’t just click constantly – you won’t get any points if you try to cheat.

With Department for Transport (DfT) figures showing that 16,406 accidents occurred in rain, sleet, snow or fog during 2017 – 205 of them fatal – leaner driver must be able to spot and appropriately react to developing hazards, especially when stopping distances are longer.

In the wet, stopping distances will be at least double those in the dry, and up to 10 times further in icy or snowy weather.

Research for the DfT has indicated that hazard perception training could reduce accidents by 11%, potentially saving hundreds of lives a year. Jesse Norman, Road Safety Minister, said that “The UK has some of the safest roads in the world, but we’re always looking for ways to make them safer.

“These new hazard perception clips offer more realistic driving conditions to test a learner driver’s ability, preparing them for overcoming the real-life challenges they will face on the road – something that should benefit all road users.”

What is the stopping distance on a motorcycle?

While motorcycle braking systems have transformed over the past years, and your stopping distance will vary significantly based on the type of bike, its weight distribution, and anything (or anyone) you’re carrying – not to mention tyre pressures and suspension performance – the Highway Code gives the following guidelines based on car figures:

To put those figures into perspective, the London Eye is 135metres tall, while the BT Tower is 190metres. The maximum length of an articulated truck and trailer is 16.5metres… could you stop in a distance greater than ten of those in the wet?

Ultimately, these are a guide only, and bikes can typically take longer to stop than cars.

Always ride (and drive) at a speed that would allow you to stop within the distance you can see to be clear.

Plays these sample DVSA videos, then hover your mouse over the pause button – click it when you see a hazard developing and let us know in the comments below how you get on!

Hazard perception in the snow

Hazard perception in the rain