Rider skills: what to do if you go into a corner too fast 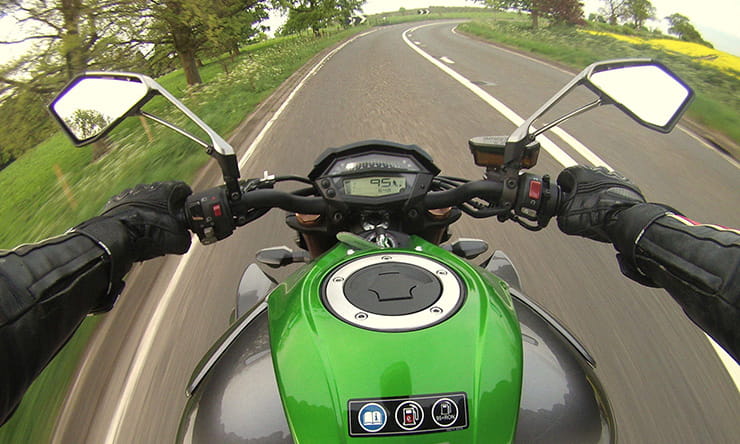 Above: in this mock-up this fella needs to act fast – brake hard in a straight line to scrub off some of that speed (the speedo reads 95mph), then focus on the corner exit. If he target fixates on one of those chevron signs, that’s what he’ll hit

Ask the Expert. But who is the expert? Mike Abbott is this month’s instructor. He’s an ex-engineer, successful racer and hugely qualified trainer. He runs the British Superbike School, which has courses at tracks around the country. You can book on 01777 818013

So, I feel like I’m going in to a corner too fast. What should I do first?

Look for the corner exit and tell yourself you can make it. A good proportion of serious accidents happen with riders on their own out in the country and the accident investigators usually say the rider wasn’t actually going too fast to make the corner, he just thought he was (and it usually is a ‘he’).

Looking for the corner exit stops target fixation and has a couple of other benefits. (Target fixation is when you concentrate wholly on the highest risk object (a verge, car etc) and then naturally steer towards it - the term originates from the phenomenon of bomber pilots crashing into their targets on strafing runs). If you look for the corner exit, you’ll find you naturally counter-steer in the right direction without having to think about it, and it will also help your balance because you can see the horizon which gives you an idea of how far you’re leaning.

Panic is a problem – I’ve seen riders do this several times. They approach the corner fast, they brake hard – usually enough to easily get round the corner – but then panic and go straight on, or panic half way round the corner and grab a handful of front brake. I remember one when a guy came flying past a group of riders, then grabbed loads of front brake so the bike was snaking from side to side and he rode straight on into a ditch. He was fine because he ended up going so slowly – the corner wasn’t sharp so he could have got round it easily.

The big danger when you think you’re going too fast in a corner is snatching the front brake. This is partly the fault of cars because we all drive really badly these days – slamming on the brakes round corners and expecting the ABS and stability control to sort everything out. And because most riders spend a lot of their time driving cars, they get lazy – I know I do. It’s a good idea to try and drive your car like you ride your bike – get your braking done in a straight line.

So provided I don’t lock up the front wheel I should be ok?

Not necessarily. If you use the front brake but manage not to lock up, the bike will sit up. I don’t think many riders realise that when you’re cornering, your front tyre is further to the outside of the corner than the rear [because of the trail and difference in tyre widths], so it’s not in line with the rear tyre any more. So if you use the front brake that will generate a force which tries to lift the bike up, sending you in the direction you don’t want to go.

How should I avoid the scenario in the first place?

Concentrate on the old racing adage of slow in and fast out. There’s nothing to be gained by hurtling into a corner on the limit – all it means is you’ll have to wait longer before you can get back on the gas again. I see people doing what I call the wall of death – going in too fast and going right round the outside of the corner, gritting their teeth and scrubbing off speed.

If you go in slower, on a steady throttle, as soon as you get the opportunity you can turn the bike and get on the gas. And if you get it wrong then, you’ve got a bit of a safety margin because you can throttle off or use the space you gained by turning tightly.

You can also cover the rear brake, and practice using it in corners so you know what it does to the bike. If you’re in a corner and you’re looking at the exit but still feel like you’re going too fast you can push on the rear brake and that will scrub off speed without upsetting the bike too much.