How to ship your motorcycle to the USA 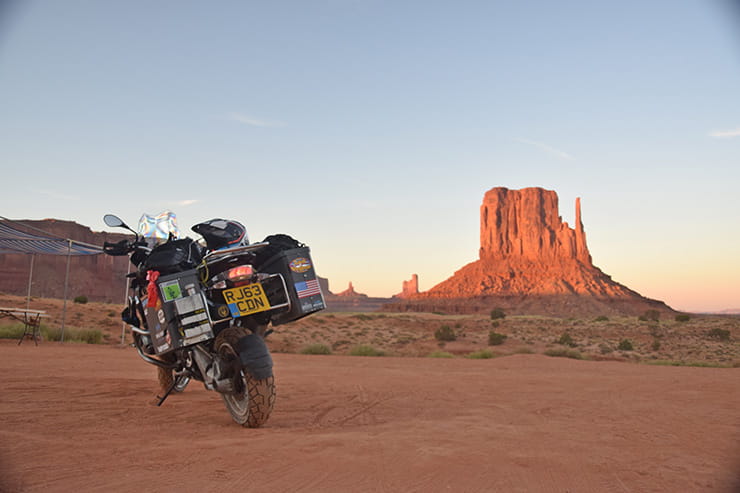 America remains one of the great places to ride a motorcycle. A common approach has been to rent a bike from one of the many rental companies, or even take part in an organised trip where motorcycle rental, guide and accommodation are all included.

But another option is to take your own bike.

This isn't as difficult or as expensive as some people might think, with it common to fly your bike in, and then boat it back out. In comparison to renting a motorcycle in the States, taking your own bike starts to make financial sense after about two and a half weeks. Less than that and it's still cheaper to rent; the cost of a return trip for your bike is approximately £1950.

It's a fairly easy process, especially if you go through one of the specialist motorcycle freight companies that operate in the UK. In 2015 I flew a BMW R1200 GS into Las Vegas, using the services of James Cargo, who have a facility just outside of Heathrow. Other agents to consider include Shippio and Motofreight. 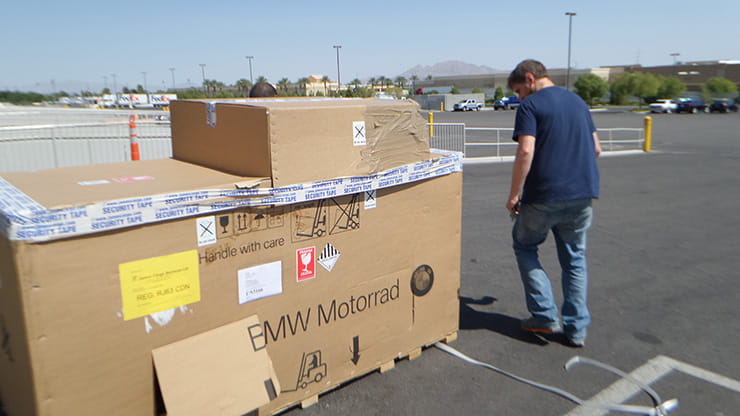 You drop the bike down to them, fully loaded, with a bit of petrol in, and the key left in the ignition. They strap the bike to a pallet, build a sturdy box for it and then arrange for it to be loaded in the hold of a commercial plane. You can even fly on the same plane if you want, and stow all of your riding gear in the crate with the bike. The biggest benefit to taking your own bike is that you know it, you can equip it how you want, if you drop and scuff it you won't have to pay any damage waiver to the rental company, and probably best of all; for memories of bringing the bike back at the end. It's also a great conversation starter having a bike on a UK plate in the US.

At the other end it's a matter of going to the cargo depot of the airport, usually the day after the plane lands. You then find the right carrier, hand over some paperwork, go off to see customs for some stamps, then, back at the cargo depot, get presented with a big wooden box with your bike in it. You crack that open, roll out the bike and take off on your adventure. Out of Las Vegas airport it took my wife and I two hours to go through the process.

Las Vegas is a good place to fly into as from the airport you're only about two miles from the desert, meaning you don't have the hassle of the interstates and busy traffic that you might have if freighting into New York or Los Angeles for example. Though you can of course freight into pretty much whichever airport you choose. 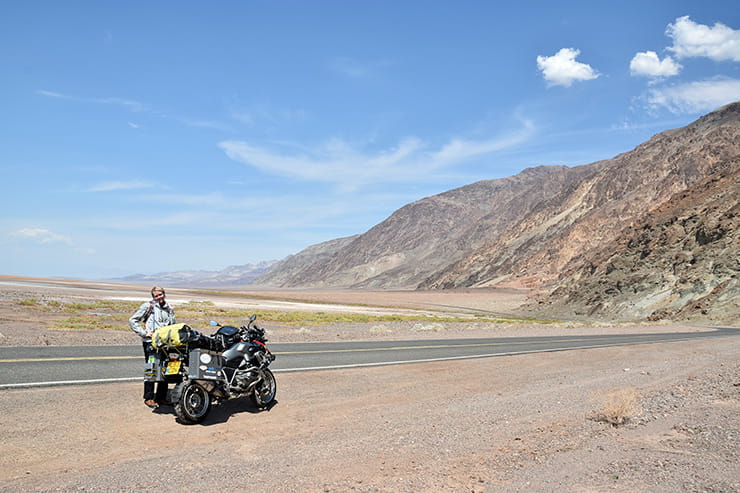 The only documentation you need in order to take your own bike into the States is a letter of exemption from the Environmental Protection Agency, which is free to obtain, with your shipping agent able to point you in the right direction. You need to apply for that about four weeks in advance.

In terms of insurance for the bike; once it’s in the hands of the courier company, their insurance will take over. While out on the road in the US, most UK-based insurers would decline to offer any level of cover; I've always used a company called Motorcycle Express, who covered the GS for two months, fully comprehensive, including break down cover, for approximately £350. Others have got cheaper insurance through Progressive, but you do need to give an American address for that, which could be a bit of a grey area if things went wrong. Keep in mind that your European warranty, if still in term, doesn’t apply in the US.

The reason for flying a bike into the States, rather than shipping it by sea, is that the arrival date is more predictable, and you're not without your motorcycle for as long prior to the trip (they usually need the bike a few days before flying). On the way back however it's more common to sea freight it, simply because of cost, with the price of airfreight much higher on the way out, than it is on the way in.

Air Canada is currently doing good deals on flying in and out of North America, though only through the airports of Vancouver, Toronto and Montreal. You get an even bigger discount if you book your own airline ticket with them. The only downside of dealing directly with Air Canada, as opposed to using one of the freight agencies, is the extra leg work at this end crating your bike and dealing with the paperwork.

To bring your bike back it's as simple as dropping it off at one of the sea ports; usually New York or Los Angeles. It takes approximately six weeks to arrive back by boat. You can leave your bike in the States for a year, but technically you’re not supposed to leave it there to fly out and then fly back in, though the bike isn't linked to your passport. 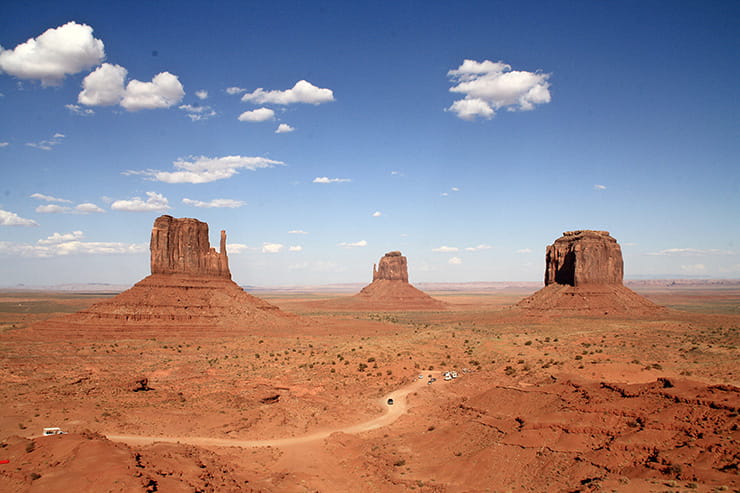 For anything less than three weeks, it might make better sense to rent a bike in America. Hiring an R1200GS for the five weeks we were there would have cost around £4500, but for a few weeks, it makes more sense than shipping your own bike in and out. A Harley-Davison would be cheaper, especially a mid-spec model. Make sure to factor in insurance cover, as most companies require a daily damage waiver supplement. Another option would be to go on a guided tour with companies such as the one BikeSocial reviewed last year with www.eaglerider.com or the www.hadrianvtwin.co.uk. These start from around £3000 per person for two weeks including bike, accommodation and support and back up. You just need to add flights, food and fuel to that. Route 66 is the most common journey, with others focusing on the National Parks to the west, or the Appalachian Mountains to the east.

The last option is buying a bike out there. This only works if you have time at either end to buy and sell the bike, or know someone in America who can help you out by sourcing the motorcycle and registering it at their address. Each state in America has different rules relating to this, so it's worth doing your research in advance; for example, some states require a Social Security Number or proof of residence in order to register a vehicle. The ideal scenario would be a family member or friend living in the States whom you could use to register the bike and then keep it there, flying in whenever you had the time to do more riding. 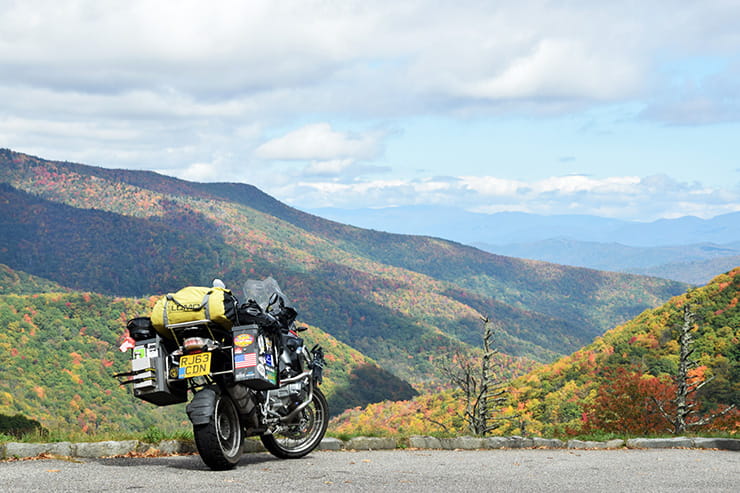 How much does it cost?

A bike trip across America is never going to be cheap, but to give you an idea, a six-week trip across the States, air-freighting in a 2014 R1200GS and riding two-up from Las Vegas to New York, required a total budget of £6000. That's for bike transport, two airline tickets, all food, fuel and lodging (60% camping). This consisted of £2000 for the bike transport, £1000 for both our flights (into Las Vegas, out of New York), bike insurance at £350, then approximately £60 a day for food, fuel and accommodation, to give a total of £2150, plus other odds and ends. You could do it a bit cheaper, but certainly spend a lot more if you wanted to. Fuel costs approximately half what we pay at around $3 a gallon. Camping spots on National Parks are around $15, motels anywhere from $45 to $100 on average. Food at a local diner costs around $30 for a decent feed for two. McDonald's provides cheap shelter from the road, including WiFi, should you need it. A good piece of advice is buy an annual pass for the National Parks, working out much cheaper than buying them individually. 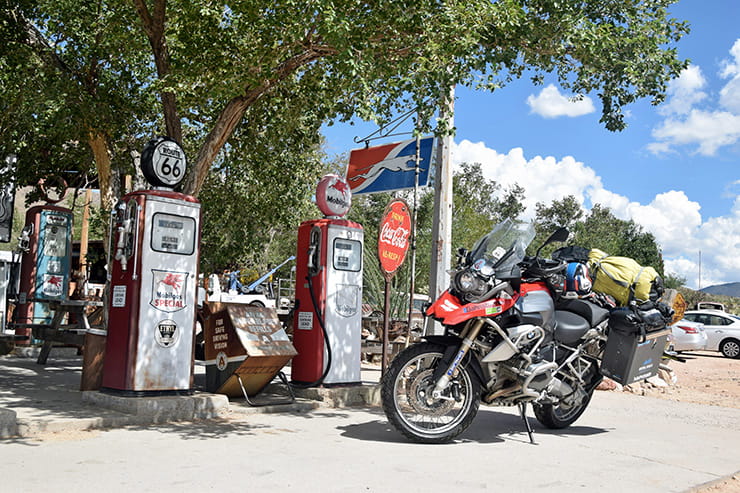