Rider skills: How to ride the perfect corner 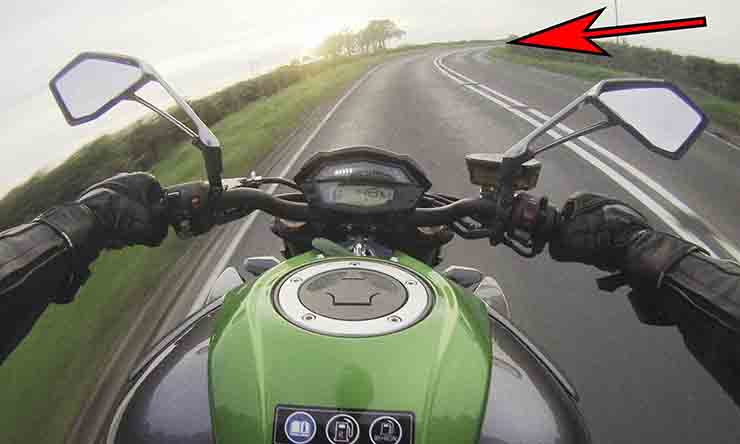 That’s the limit point. If it doesn’t move relative to you as you approach the corner, it means your speed is about right. If it starts moving away from you (to the right in this case) it means the corner is opening out, and you can accelerate.

Giles Lamb is an instructor for the hugely respected Rapid Training and has been riding bikes for the police for 12 years. You can book a course at www.rapidtraining.co.uk or call 01296 630638

I feel slightly overwhelmed with the volume of advice about cornering. Could you make it simple?

Almost. There are two golden rules, which might seem fairly basic, but a lot of people don’t seem to get them right. First is limit points, or vanishing points. This is the point where both sides of the road converge. As you approach it eventually seems to move away (at varying rates depending on the corner). You must really tune into these. If, in particular, I’m on a road I don’t know well or I’ve never been on in my life, I am glued to them.

So what am I supposed to do with the information?

The fundamental point is the relationship between how far away you are from the corner, (are you still approaching it or are you now entering it?), your speed, and the rate at which the limit point is moving away from you. So as you approach that corner and start to enter it, you need to marry your speed, and the limit point speed. You need to come into the corner and drive through it at the same rate that the limit point in unravelling. If you are barrelling in, and that point is not unravelling, it’s all going to get a bit uncomfortable.

It’s not actually that complicated, but that ‘marrying of speed’ bit needs practise. You need to get into the habit of constantly assessing what the limit point is doing.

And what’s the second golden rule?

Corner entry speed. How many of us crash on a corner every summer because we’ve gone in too quickly? Lots. Entering a corner too quickly, even by just five or six miles an hour, instantly feels wrong. Body tension kicks in, it’s a struggle to turn your head to look at the limit point and your arms get all tight. You’re stuck off the gas, maybe the bike starts to run wide, the front feels all wrong, you’re praying for front tyre grip, you can’t get on the gas to drive out, and the suspension is woefully unbalanced. It’s a horrible horrible feeling. 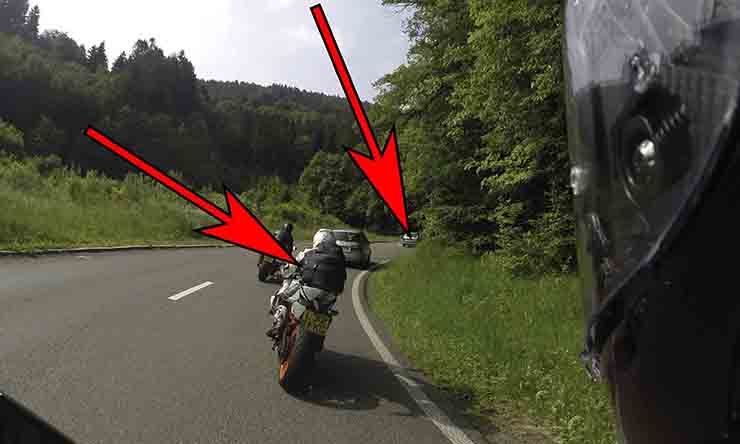 It’s tempting to stare at the rider in front. But you should really be focussing on the limit point (arrow on right).

So is there a common theme in getting corner entry speed

Well the first and obvious answer is yes, you’ve misread the limit point - you’re running in quicker, than the limit point is unravelling. The other common cause could well be a bit of a fudge in how you lose your speed.

What do you mean? Using the brakes?

When I did all my civilian advanced training in the ’80’s, the sort of phrase that was bandied around was: “Oh he’s a lovely rider - you never see him brake.” There were even stories of riders adjusting their rear brake light plunger switches, so they could secretly brake without

showing a light. Madness! Now don’t get me wrong - a good rider will have wonderful

acceleration sense, and it may well be that you won’t see them brake for miles and miles. But what I still see is riders fudging gears and brakes and ultimately having no regular

So what should the system be?

Your first port of call for slowing down, is just, shutting your throttle. Then make your decision; do I need to brake? And if you need to brake, brake! If you can do it on acceleration sense, great - do that. The important point is that you’re not taking the gear to slow down, you’re taking the gear to match your new lower road speed.

So no last minute braking?

The cause of so many badly judged corner entry speeds is seeing a corner coming up and just willy-nilly taking gears with lovely blips of the throttle and hoping you’ve judged it right. Classic evidence that you’ve misjudged it, is that having taken your gears, you then find

yourself having to brake anyway. You should have gone with the brake option in the first place. Worse still of course is you hold your breath, hope for the best and don’t show your brake light to yer mates behind.

I’m not sure I’m a natural at this though…

You’ve probably heard the terminology, ‘unconscious competent’ and ‘conscious competent’. There are many things we do on a bike that we don’t think about - they just happen. They are ‘unconscious’. We all like to think that being ‘unconscious’ on our bike is a good thing - a sign of years of experience and natural judgement and talent. Well I can tell you that for me, especially on those unfamiliar roads, that judgement of limit point and entry speed is very very conscious. I think about it! You will hear the cogs in my brain turning. When they first

You’re going to say the word practice again aren’t you?

Yes. Next time you are out riding, try taking a road you don’t know and practice. Great riders