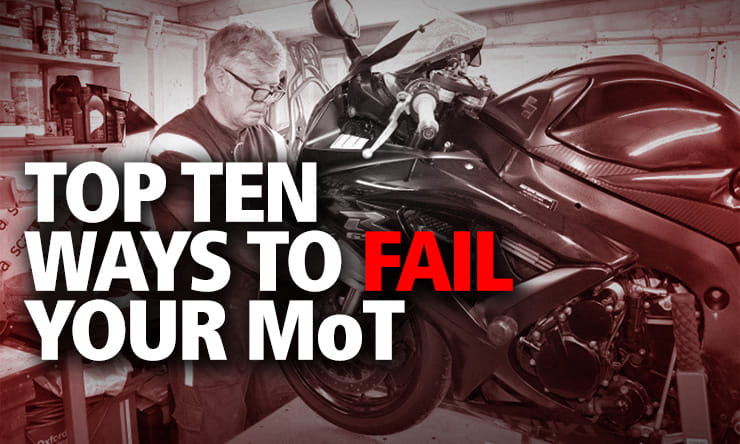 Is your motorcycle due an MoT? If it is, check the headlights, as data from the Driver and Vehicle Standards Agency shows that almost 10% of bikes – 88,103 – failed their MoTs due to faulty lights or reflectors.

The new MoT brought in minor, major and dangerous defect categories in a bid to help riders better understand what was wrong with their vehicle. ‘Dangerous’ and ‘major’ defects automatically lead to a failure, and the DVSA advises that vehicles with a ‘dangerous’ defect should not be driven until repaired. You can read more about the MoT, and hear what a tester has to say about it, by clicking here.

“DVSA’s priority is helping everyone keep their vehicle safe,” said Neil Barlow, DVSA’s Head of Vehicle Engineering. “The new MoT has seen nearly 50,000 dangerous motorcycles either repaired or taken off the road. But it is concerning that such a high proportion of defects are to do with lighting and brakes, both of which have a major impact on the rider’s safety.

“With just over 5.1% of motorcycles failing their MOT for being dangerous we urge people to sign up to our free MoT reminder service so they get their MoTs done on time, helping keep Britain’s roads safe.”

28% of all vehicles turn up late for an MoT, so the DVSA scheme makes sense, reminding owners by SMS or email four weeks and two weeks before their vehicle’s test is due. You can also check the date of when a vehicle’s MoT is due, view its MoT history and download a free copy of the latest MoT certificate by visiting www.gov.uk/check-mot-history.

All you need to know about the MoT

Failure numbers for “dangerous” defects, by vehicle class, were…

Garages do not have the power to prevent riders from using a motorcycle with a ‘dangerous’ defect. But any rider attempting to do so runs the risk of being fined or receiving points on their licence. This would apply whether they were not aware of the defect or had found out through the MOT.

Since 2013 the DVSA has issued 174 motorcycle safety recalls, but not all owners responded:

Single Vehicle Approval is common among custom motorcycles and trikes, but they don’t all pass:

The Driver and Vehicle Standards Agency (DVSA) is an executive agency of the Department for Transport. Its priority is to keep everyone safe on Britain’s roads by…