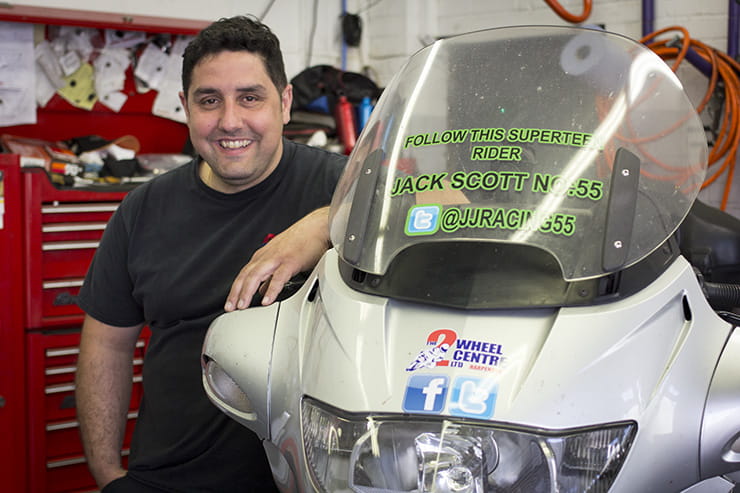 Out expert, Nick Nomikos, has been an MoT Tester since 2002

From 20 May 2018, the Ministry of Transport (MoT) test is changing, with stricter rules and new failure categories coming into effect. BikeSocial looks at the new legislation, and asks Nick Nomikos – Sales and Service manager of The Two Wheel Centre in Harpenden – what it means for bikers. Nick’s been an MoT tester since 2002, and has worked at the welcoming family-owned bike shop since it opened in 1991…

What are the changes to the new MoT?

The first thing you need to know is whether your bike (or car) needs an MoT; as before, your first MoT is due three years from the date of first registration, so if it was registered on 1 April 2016, it’ll need its first MoT on 1 April 2019.

Now however, any motorcycle, car, van or other light passenger vehicle that’s over 40 years will not need an MoT… as long as it hasn’t been substantially changed.

What does ‘substantially changed’ mean?

If you have a ‘vehicle of historic interest’ (one that’s over 40 years old) that hasn’t been substantially changed, it won’t need an MoT. The rules are clear regarding chassis, axles/running gear and engine for cars and vans, but on motorcycles the legislation is simply that a bike will be considered ‘substantially changed’ if it’s been issued with a Q plate, or is a ‘kit’ assembled from components from different makes and models of vehicle, or is a reconstructed classic as defined by DVLA guidance, or is a ‘kit conversion’ – where a kit of new parts are added to an existing vehicle, or old parts are added to a kit of a manufactured chassis, changing the general appearance.

Keep in mind that at the time of writing in early 2018, the government states that ‘further arrangements for motorcycles may be introduced, including if core testing standards are considered further internationally.’

Nick says: “There are forty-year-old bikes available that can reach pretty high speeds now, so I hope riders are cautious. Owners of a historic vehicle will need to declare that it meets the requirements each time they tax it. They'll still be responsible for keeping their bike or car in a roadworthy condition, and could be fined up to £2,500 and get three penalty points for using a vehicle that's in a dangerous condition – effectively, they're declaring it roadworthy themselves every time they take it out.

“For a long time, testers have seen machines coming in that have a registration mark for the 1930s, yet have a more modern, powerful engine in. With the much tougher legislation already in place over in Spain – which sees bikes having to exactly match how they came out of the factory – it wouldn’t surprise me if custom motorcycles came in for more scrutiny in the future.

How can my bike fail?

An MoT pass might currently have advisories, but defects will now be listed as ‘Dangerous’, ‘Major’ or ‘Minor’. While your MoT tester might still give advisories, here are the new categories in full:

Nick says: “Too often, riders haven’t taken advisories seriously enough, and it’s not unusual to see a bike fail the next year for something that should have been sorted out; the new categories will tighten this up a bit.

“Always remember when buying a used bike or car that an MoT is only a certificate of road worthiness at the time it was issued. It’s NOT a guarantee that the vehicle is safe after that moment.

“The most important thing to take away from this is that if a defect is reported as dangerous, the guidance says that you must not ride or drive the vehicle at all until it's been repaired.”

Some extra items will be tested during your MoT, which include checking the following:

• if the tyres are obviously underinflated

• if the brake fluid is contaminated

• for fluid leaks posing a risk to the environment

• for missing brake pads or discs

There will be other, smaller changes, which your MoT tester will be able to explain.

Nick says: “It has been known for people to, for instance, remove a disc and caliper from a twin-front-disc bike in order to avoid failing on a seized piston. An MoT tester can now use their knowledge in order to identify when parts are missing, rather than simply not being able to test what’s not there. The new legislation is going some way to closing some of the loopholes.

“Checking the brake fluid for contamination will still only be a visual check as we’re not permitted to remove the cap. Of course, some bikes’ reservoir viewing windows look black, so there’s little that can be done here besides identifying if the fluid is low.

“One of the key items not listed above is that aftermarket HID (High Intensity Discharge) lamps will fail. Of course, machines like the BMW K1200GT had them as standard, which is fine, but any standard halogen lamp that’s been converted to take HIDs won’t get a pass. There can be numerous issues with incorrectly fitted lamps, from the fact that the reflectors won’t focus the beam correctly, to serious electrical problems.” 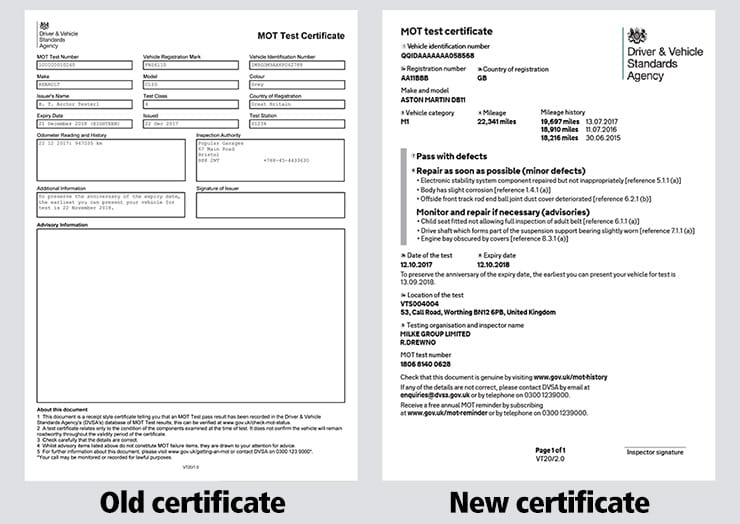 Your MoT certificate will change

Your MoT test certificate will be redesigned to list any defects under the new categories. In addition to this, the online check of a vehicle’s MoT history will be updated. This is a valuable resource for anyone looking to buy a used motorcycle (or car), as you just need to know the registration to get information on any advisories on a pass, the recorded mileages, and why a vehicle failed. You can check an MoT history at www.gov.uk/check-mot-history

Nick says: “It shouldn’t be considered a definitive guide, but checking a bike’s MoT history can help identify a machine that’s been neglected if it has repeated advisories relating to poor maintenance.

“The mileage records can show when peak use of the bike has been during its life, while if it’s got a low mileage but keeps getting picked up on things like worn tyres, chains and sprockets, it could have been ridden very aggressively. Or perhaps even on track, with the speedo disconnected.”

The laws on emissions are getting stricter

This only applies to diesel cars, so bikers don’t need to worry. If you do own a diesel car, you need to be aware that if a DPF (diesel particulate filter) is fitted, you’ll receive a major fault (a fail) if your MoT tester finds evidence that the DPF has been tampered with, or if smoke of any colour is coming from the exhaust.

Nick says: There are still no emissions tests carried out on bikes, besides the noise levels, which are purely down to the tester’s discretion. As long as there’s no mark saying ‘race use only’ or ‘not for road use’, an aftermarket exhaust could pass, though a current reason for rejection is if ‘the type of noise emitted is clearly in excess of that which would be produced by a similar machine fitted with a standard silencer in average condition’.”

Ultimately, there are few issues in the new MoT laws to really worry bikers. From personal experience, we’d always recommend using a trustworthy and thorough inspector for your MoT – you’re paying for the work to be done, and if – like us – you do a lot of your own bike maintenance, having an expert check your motorcycle can help keep you, and those around you, safer on the roads.