My leather bike kit is ruined… can I fix it? 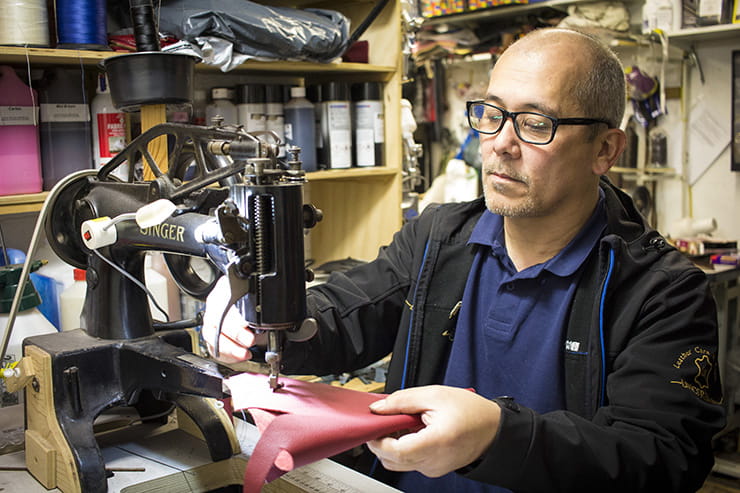 “Anything can be repaired – if it can be made by someone, it can be fixed by someone.” Alan Lui repairs motorcycle leathers for a living – he’s the man that Kushitani UK goes to, but he’s worked on almost every brand. He also renovates and rebuilds furniture, car interiors, and even the most expensive handbags from the likes of Louis Vitton, Prada and Gucci.

“The most common job I have in for motorcycle kit,” says Alan, “is cleaning and odour removal. This is done with a series of specialist chemicals to get rid of the gunk that’s built up inside the leather, before the garments are hung in a special ozone chamber. I’ll then usually need to recolour it and repair the top coat, which overall could cost between £50 and £70.”

Leather used for bike kit is chrome tanned (see our article to understand the differences between leathers), and has a fine polyurethane coating to help protect the colour coat stop moisture and other contaminants being soaked in and damaging the fibre structure, which makes it weaker.

When leathers have gone lighter due to wear, putting a typical leather cream on would make it go darker, but it’s just softening it, and not repairing the protective coating or helping to bind together the leather’s fibres. Think of it like a car body panel – if it gets scraped, the metal’s exposed. You could rub a wax crayon on it to get the colour to look right, but the metal would still be vulnerable to corrosion. A solid repair will see any dirt and rust removed before a base coat, colour coat, and a protective lacquer are applied. Motorcycle leather repair is surprisingly similar, and a professional like Alan will be using the same products on the leather that were used in the tannery when the hide was first processed. 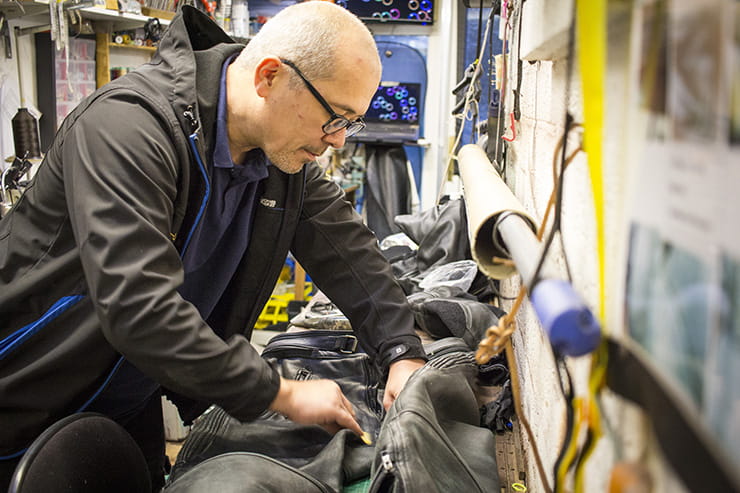 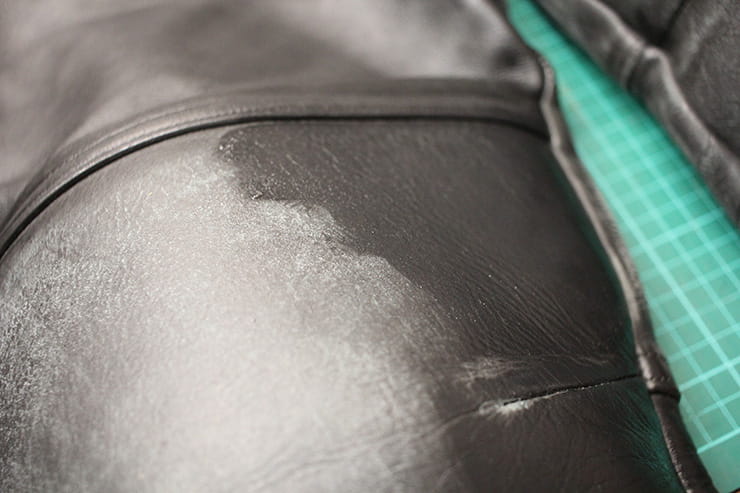 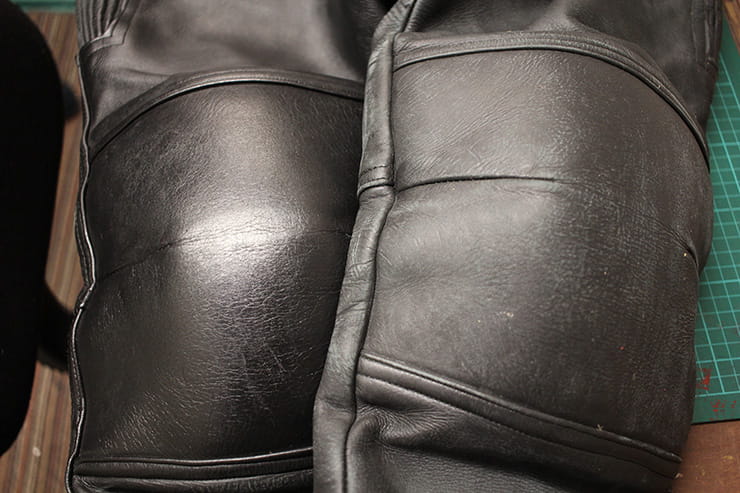 If your leathers are scuffed or pale, they’ve lost the protective coating on surface, but it can be repaired and the colour restored

My leathers have gone like cardboard – are they finished?

When leather is very dry – usually due to a lack of care – it can often be restored, but requires very specialist chemicals that you’ll need to go to a professional for – again, simply rubbing in a leather cream will soften it, but it will be unlikely to restore the fibre structure and your kit won’t be as safe

“Another common repair is replacing the zips,” says Alan. “I only use YKK zips, typically to replace damaged fasteners, or to add a connecting zip so people can join their jacket and trousers – something you have to be able to do on a track day for instance.” It keeps you warmer as well as safer so it’s worth doing for the road.

Adding a connecting zip is relatively simple, but it can mean deconstructing a fair bit of the jacket as it’s not simply sewn through the back: “What might be a simple repair or addition,” Alan tells us, “can end up very involved, as to get to one panel, you might need to take several other sections apart – it depends where the panel was inserted in the original construction process.”

Some of the other modifications that Alan’s carried out include fitting and repairing knee slider Velcro patches, making leather trousers wider at the bottom to get them over new boots, modifying unisex leathers to be more flattering for a woman, occasional panel replacement, making and repairing bike seat covers, and a few adjustments of the seats leather trousers that had gone very baggy… 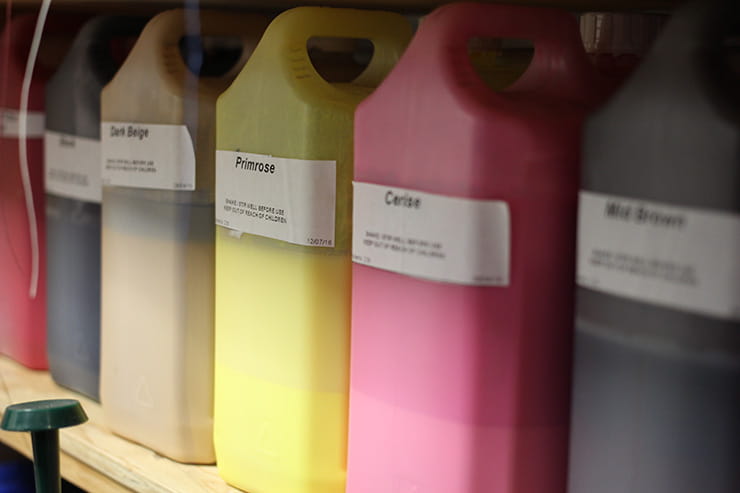 Dyes can be mixed before being sprayed onto the leather, to match almost any colour

I’ve got <insert crazy colour here> leathers – what about those?

Coloured motorcycle leather is generally just produced using a colour coat, and this can be replicated by mixing dyes before spraying them on. Foiled leather is more of a problem, as that has to be bought in, and you can’t just buy a small piece; “In this case,” says Alan, “it might be more efficient to alter the overall design of the garment to accommodate a more readily available leather.

“Thickness isn’t a problem either – I’ll generally have to skive leather down to match the thickness of the kit being repaired as it’s got to match. You have to choose the right type of leather – a full grain buffalo hide, for instance, wouldn’t match the artificial corrected grain pattern of the leather usually used on bike kit.

“I won’t put anything out there that I don’t think is safe. I’ve turned plenty of bikers away who have come off in a suit that’s too poor originally; I have to make a decision on how strong the leathers will be once they’re repaired. I can make almost anything look good, but it’s absolutely pointless if what’s looking ‘new’ has no durability or service life.

“Crash damage often occurs on the inside of the arm, where the leather has pulled the textile stretch panel as it dragged on the ground. Stress areas are key at the hips and shoulders, but the crutch too – it’s not abrasion that causes the damage there, it’s the strain put on them by the section that’s dragging on the road.

“It might be that to strip a damaged panel out, the surrounding panels would become damaged. When you have six or seven stiches per inch you’re adding perforations, unless you use exactly the same holes. Once a hole’s in leather, it’s there for good. I do match as closely as possible, but you can’t get them exactly the same over a typical repair.” 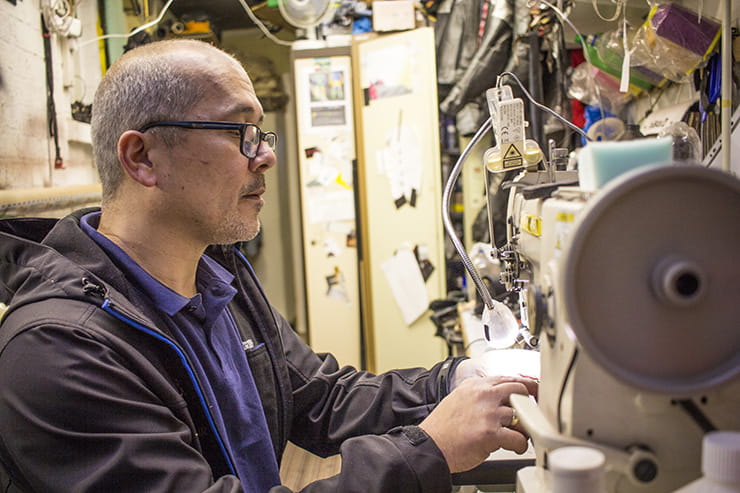 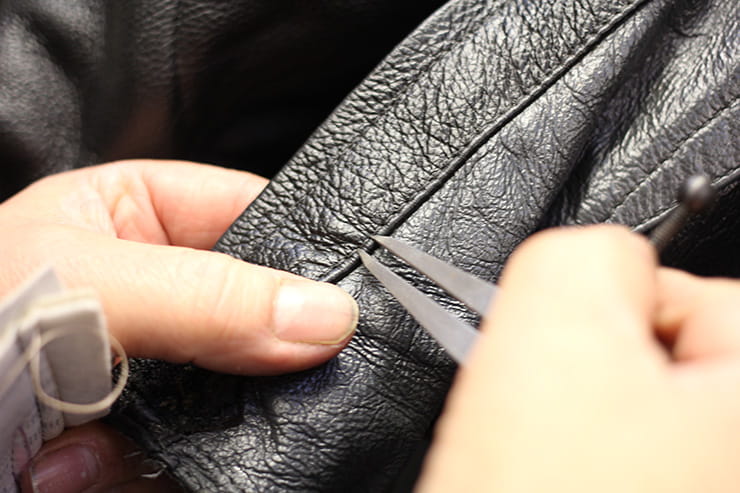 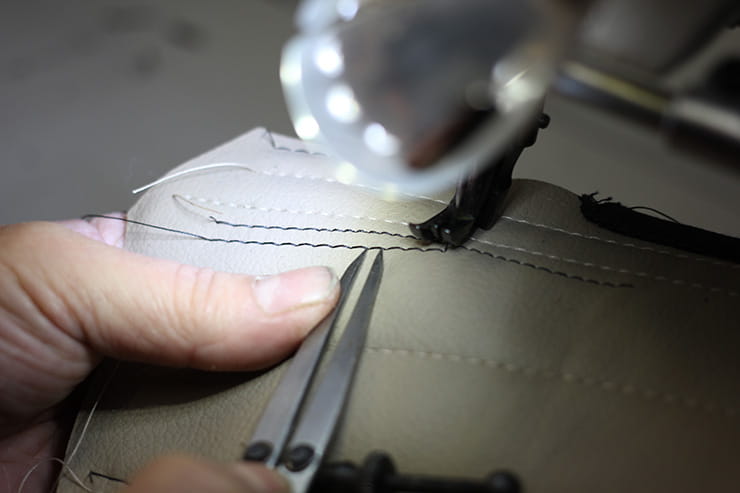 The spacing of the stitches is matched during repair, but these holes can cause weaknesses

I got some leather cheap off the internet – can you use that for my repair?

A good quality hide costs around £200, but only some parts of that can be used for motorcycle leather repair – the rump is the toughest section, but the belly is just too stretchy. And with so many varying thicknesses – and even holes – across each hide, there’s only so much of it that can be used for a good, solid repair.

“You can of course get cheap leather,” Alan tell us. “Sometimes it’s liquidated stock, or it might be heavily finished split leather – you have to be very careful when buying cheap as you do tend to get what you pay for.” 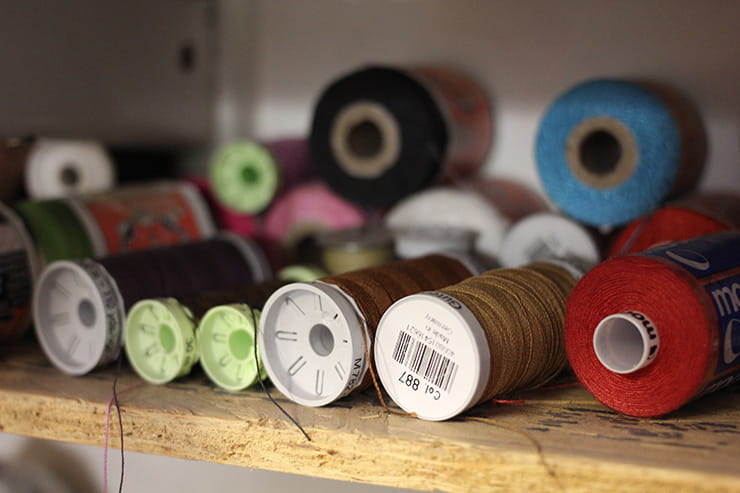 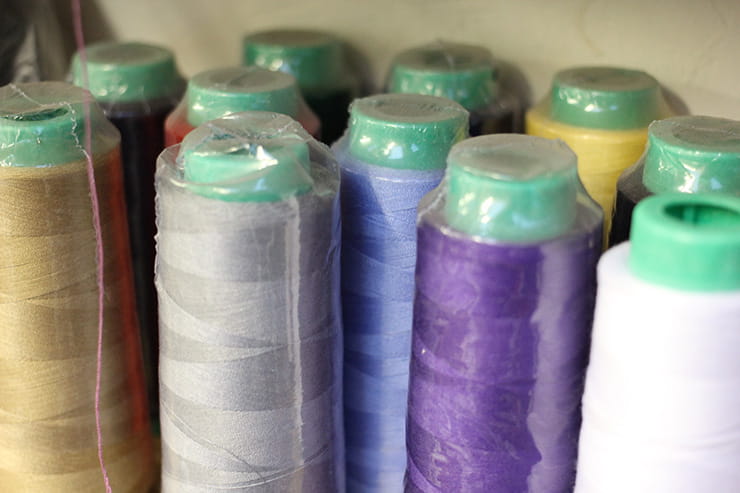 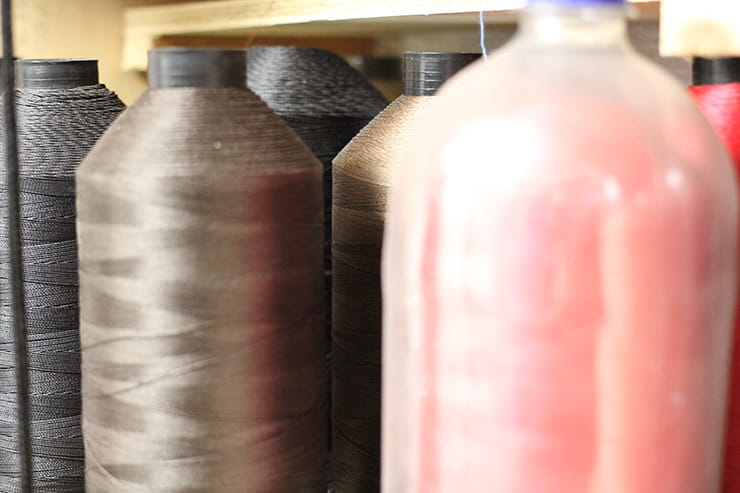 I’ve got some thread – I reckon I can patch it up myself.

There are many, many different threads used in leather construction – long filament, polyester, flaxens, woven cottons, waxed, bonded, UV protected… without a microscope, you won’t be able to tell, but it’s very important to use the correct thread – some are incredibly strong, while others are much weaker. Some – designed for stitching the panels that cover airbags in cars – are designed to snap; using that in bike kit would be very bad indeed.

Care for your kit by reading our feature here and it’ll last you many years, but if you have damaged any of your gear, it’s worth asking a professional if it can be repaired before you throw it away: “I’ll repair almost anything,” says Alan, “though rarely textiles – besides the difficulty of getting hold of some of the materials, the construction is usually very complex, which can make them uneconomic.”

Thanks to Alan Lui of Lincs Repair www.lincsrepair.co.uk