Balancing your motorcycle’s carbs (or fuel injection) can improve response, performance, economy and running temperature. It’s an important part of maintaining your bike, and with one tool that will cost less than an hour’s labour at your dealer, you can do it yourself at home. Here’s how…

Why do I need to balance my motorcycle’s carburettors?

If your bike has more than one cylinder, it’s important that the air/fuel mixture going into each cylinder is the same; if one carb opens further than the others, that cylinder will run hotter, the engine can idle poorly, become less economical, and be less sharp on the throttle.

Over time, carbs can drift out of sync, so it’s an important part of keeping you bike running at its best. 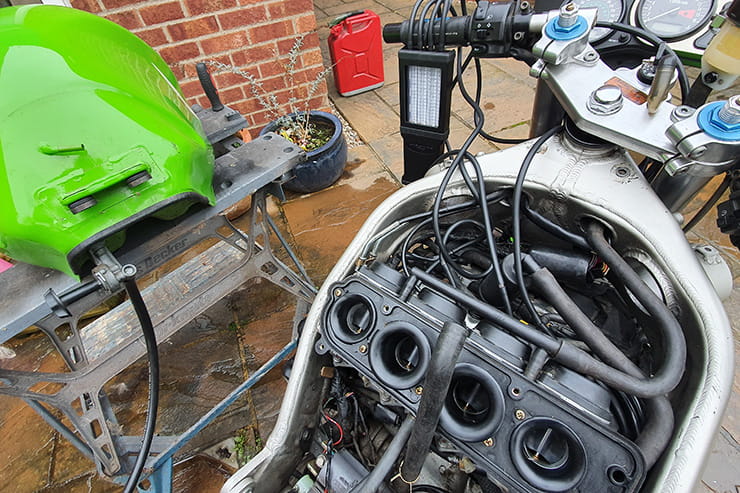 Carb balancing can be a bit of a faff, so many riders ignore it

Do I need to sync a fuel-injected bike’s throttle bodies?

Potentially, yes, but when and how you do it will depend on your bike – this is another reason why it’s very important to have a Haynes manual for your motorcycle. For instance, on the fuel-injected Honda CBR600s from 2001 to 2006, the Haynes manual explains that the fuel system needs synchronising only after the starter valves – which control the idle speed – have been removed. Other bikes may need it more frequently, while some (like modern BMWs) don’t require any adjustment at all. Again, check in your owner’s manual or Haynes manual for details about your bike, but the process will be basically the same as explained here.

How often should I carry out a carb balance?

This will vary by bike – I’m using my own 1999 Kawasaki ZX-6R for this tutorial, and you’re meant to check the carburettor synchronisation every 3,000 miles, while the Honda CBR600 FX I used to own should have been done every 8,000 miles or 12 months (whichever came sooner).

Carbs should also be re-balanced after engine work, including adjusting the valve clearances.

How do I know when my carbs or throttle bodies need balancing?

It’s best to go by the service schedule, but balancing carbs can be a fiddly job, so many owners understandably ignore it. If the engine isn’t idling very well, that could be a sign that you need to do it. And if you adjust the valve clearances, you’ll definitely need to.

Personally, I do it as part of the overhaul I carry out on any older used bike that I buy, and I’ll probably do it again on the ZX-6R after about three more years. I doubt I’ll get many miles on this bike, but if it was used regularly, I’d probably aim for every 6-8,000 miles.

What tools do I need?

This article isn’t intended to be all you need to balance the carbs or fuel injection systems on any motorcycle. I’m basing it on my 1999 Kawasaki ZX-6R, but your bike will have its own unique needs, so I thoroughly recommend buying a Haynes workshop manual first. My hope is that this will give you the confidence to take on the job for yourself, but only with a workshop guide specific to your machine will you have the correct procedure. Remember that Bennetts customers can save a massive 40% on Haynes manuals at Bennetts Rewards. You’ll also need the following… 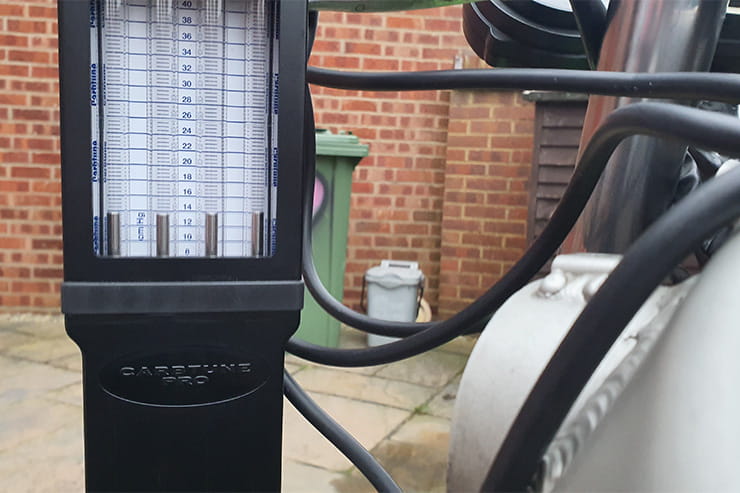 How do I balance the carbs on my motorcycle?

The ZX-6R uses three screws – one between each throttle body – to adjust the balance, but it really will vary a lot by bike; on some motorcycles you might have to tweak the length of each throttle cable. In each case though, you’re simply adjusting the relative position of each throttle butterfly or slide to the others, or to a ‘master’ preset one.

Checking and balancing your carbs should be the last job in any servicing, and everything else should already have been checked or replaced as necessary; there’s no point balancing carbs if your spark plugs are worn or your valve clearances are out for instance, while any leaks in the airbox, carb rubbers etc will also cause problems.

The Carbtune Pro comes with a very good instruction manual, but you’ll also need a Haynes manual for the method specific to your bike…

Step 1: Strip the bike down

You’re going to need to get the carbs off, so the first step is to remove the fairing panels.

Get the engine warmed up to save time later, then remove the fuel tank. 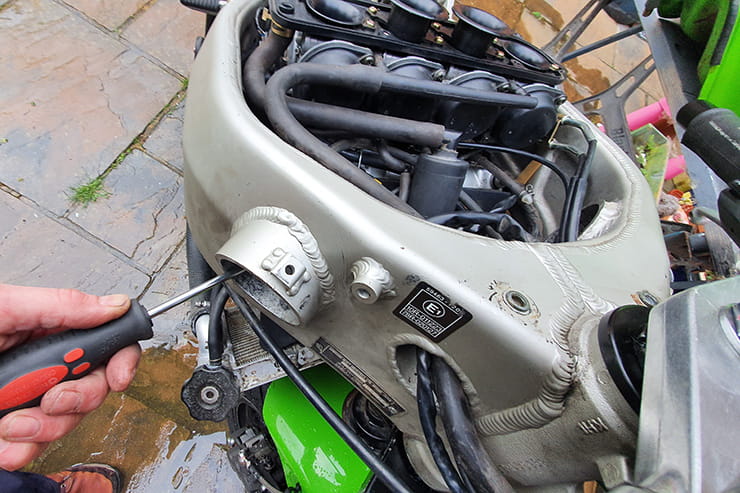 On this bike, you need to lift the carbs up to get at the pick-up points for the Carbtune’s pipes. You’ll need a long screwdriver and a torch, but you can get to the screws that hold the clamps in place by going in through the air-intake holes on the sides of the frame 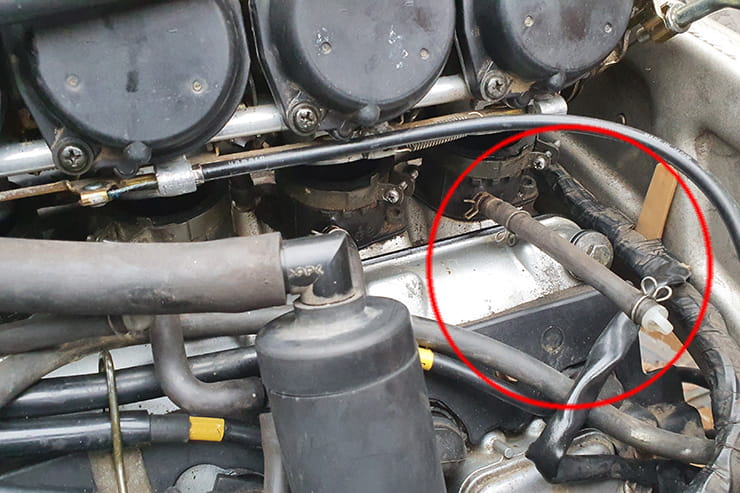 There are four hoses coming out of the front of the carb bases (two are blanked off after a few inches); you need to pull these off leaving the brass take-off stubs exposed, so squeeze the clips open with pliers to remove them, then press the Carbtune’s hoses in place. It’s really important that there are no leaks, or the readings will be off. 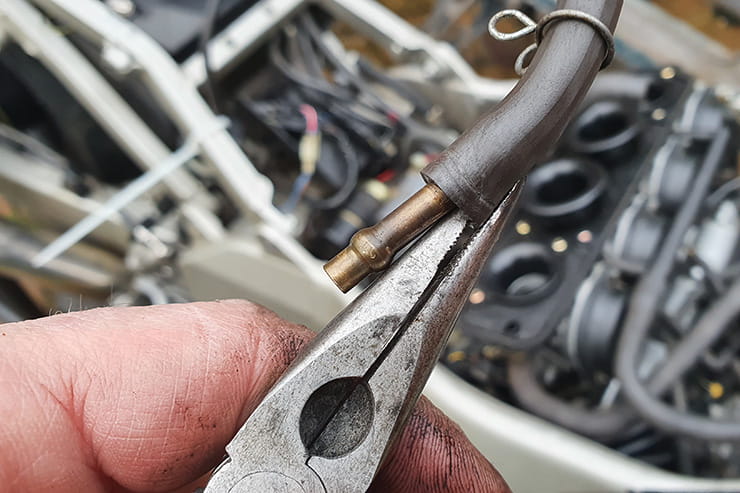 Quick tip: My hoses are stuck!

The hoses on this ZX-6R were stuck on the brass take-offs. The easiest way to remove them was to take each hose and stub out together by releasing the clip that grips the carb inlet rubber around the other end of the stub. I was then able to carefully push the end of my snipe-nosed pliers under the hose to free it.
I then pushed the take-off adaptor into the Carbtune hose, before pushing it back into the inlet rubber.

Step 5: Put the carbs back on

Refit the carbs, making sure they’re firmly seated, then tighten the inlet rubber clamps. Don’t forget to put the carbs back on before starting the bike up as it really won’t run well at all. Apparently. 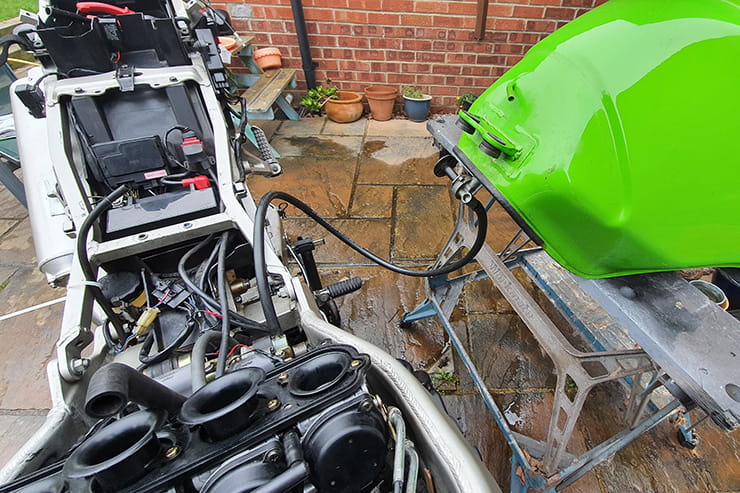 Step 6: Set up a fuel supply

You can rig up a small container to feed the carbs, but I put the tank onto a workbench, then ran a long fuel pipe to the carbs. Just be careful if the tank is tipped up that fuel isn’t weeping from the cap as it can damage your paintwork. 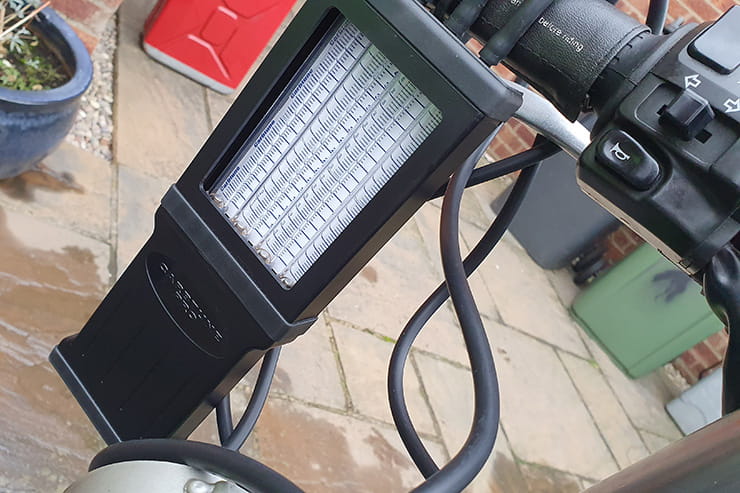 The Carbtune can be hung from the left handlebar, so then just connect the hoses to the top of it, making sure they’re in order running left to right. 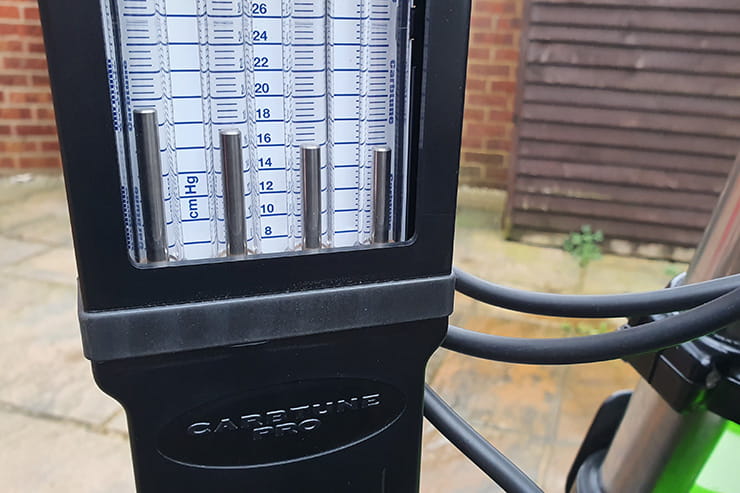 Step 8: Set the engine to just above idle

Get the engine back up to temperature then, by adjusting the idle speed screw, let it sit at just above normal idling speed.

It doesn’t matter what level the gauge is reading – it’s where all the readings are relative to each other; all four cylinders should read within 2cmHg of each other (except on some old Suzukis with CV carbs, where the outside carbs have to read 2.5-3.9cmHg higher than the inside pari). If you’re interested, that’s 2cm of mercury, but the Carbtune doesn’t use mercury; it’s actually a series of precisely machined stainless-steel rods that damp the readings and make it accurate yet easy to use.

As you can see, there was about 4cmHg between the lowest and the highest reading on my bike, so they needed adjusting… 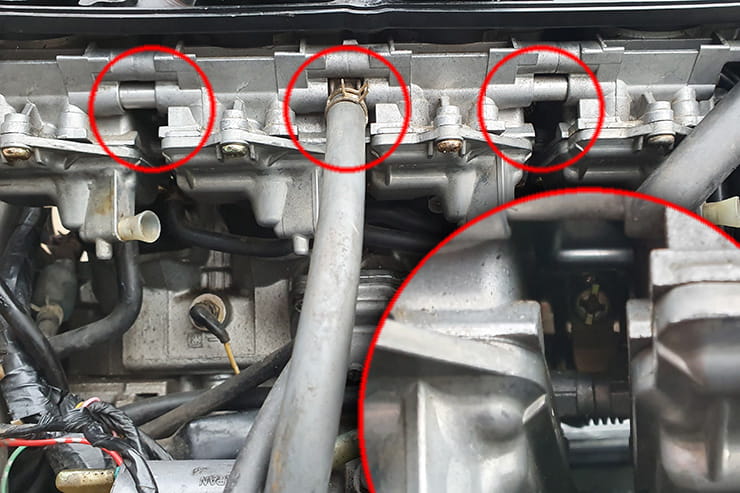 When adjusting the carbs, you must be aware that as you press on the screw to turn it, it will throw the reading off. You only need tiny movements of the screw, and try to use as a light a touch as possible but also check the readings after you’ve removed the screwdriver, and give the throttle a quick blip to settle the linkage.

This Kawasaki is pretty easy to adjust, but some bikes have locknuts that can throw the readings off again as you tighten them. Take your time and you’ll soon get a feel for it.

The screws are hidden between the carbs, and there is a sequence you need to follow. Remember, it doesn’t matter where the gauge is, just that all the readings are within 2cmHg of each other…

1: Turn the left screw (between cylinders one and two) until the two readings are equal.

2: Turn the right screw (between cylinders three and four) until the two readings are equal.

3: Turn the middle screw (between cylinders two and three) until two pairs of readings match and hence all four are within 2cmHg of each other.

Blip the throttle to check it’s all settled, then when you’re happy, you can remove the Carbtune’s hoses, refit the original pipes, put the bike back together and enjoy your work. Well done!

Before and after carb balancing

If you can’t do this job yourself, your dealer will be happy to take the work on. While prices will vary, Nick Nomikos, owner and MoT tester at The Two Wheel Centre in Harpenden (as well as our technical advisor) says he’d charge between £66 and £99, depending on the bike.