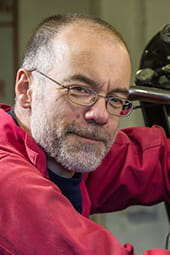 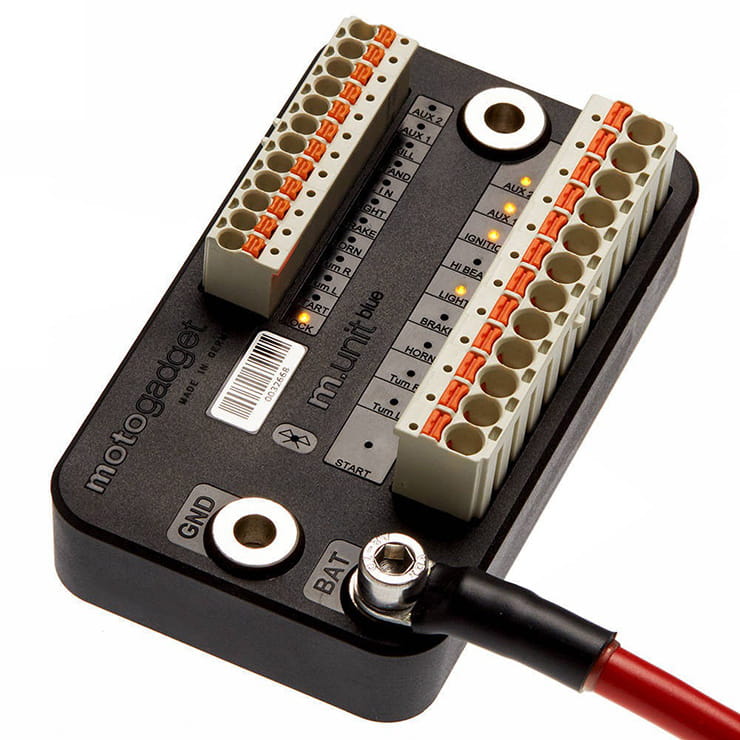 This is a cleverly-marketed German device that claims to simplify your custom wiring job. Available in normal (£213) or Bluetooth (£310) spec, it acts (among other things) as a fuse box, flasher unit and power distribution device. But perhaps the main idea is that it can receive signals from all the handlebar switches through a single wire, rather than the more usual bundle. As most people freak out at electrics, it sounds a tempting proposition.

The single-wire thing works fine, but only with a doohickey called an M-Button (£45), which you connect to the switches and hide in the handlebars – not always an easy task. It then uses can-bus technology to send the different signals down the single cable to the M-Unit, which typically lives under the seat.

Most people also use push-button switchgear with an M-Unit (typically made by Motogadget, Motone or ISR). But OE switches can work too.

I should say that you don’t have to use the M-Button; you can connect push-button switchgear directly to the M-Unit via a conventional bundle of wires. As they run under the tank anyway, you aren’t going to see them. 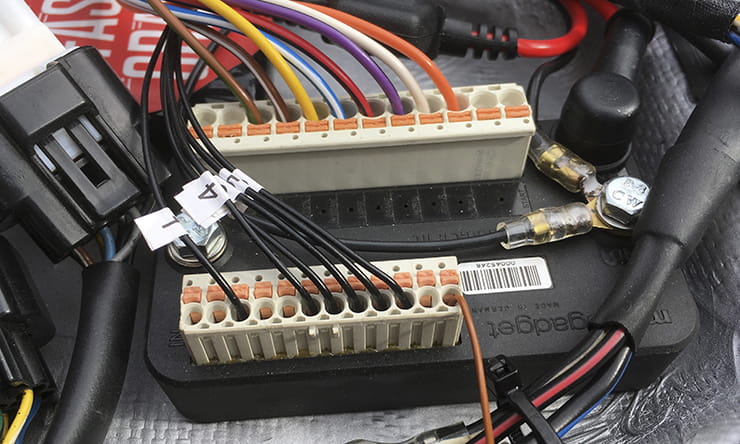 I have a bit of a problem with the M-Unit system. Not only is it more complicated, expensive and fiddly to assemble than a conventional switchgear setup; the push-button switches use screw connections just like the ones in a domestic plug. I’ve seen these come undone on an iron, so they hardly seem suitable on a vibrating bike. Push-button switchgear has a couple of other drawbacks too – see switchgear in our guide to motorcycle electrics. The cheaper of the two M Units (the V2, £213) uses screw connections as well, but the newer M-Unit Blue (£310) is a bit more civilised, with spring contacts.

To protect the copper cable strands from the screws Motogadget supply little ferrules, like you get on the end of a bicycle gear cable, but I’ve never found there to be enough in the packet. I’m afraid it doesn’t stop there; the M Unit is predicated on the idea that you switch the entire bike on with one set of contacts. On some bikes (for example the ZXR400/750, CBX1000, W650), turning the ignition switch also connects part of the charging system. In other words, you need two separate sets of contacts to be on when you’re running, and off when you’re not. I’ve asked Motogadget’s tech support about this and they couldn’t advise me. You can work around it with a separate switch or relay, or use one of the ‘Aux’ connections, but it’s hardly ideal.

My advice is to ask yourself the question: what problems do you anticipate your custom bike will have that an M-Unit will solve? If you want to vary your indicator flash rate, or the pulsing of your brake light, or turn your bike on with your phone, then go for it. If you just want a bike with working lights, horn and ignition, save your money.

Get more advice on all forms of motorcycle electrics by clicking here.

Looking to buy another bike to add to your collection? Learn more about Bennetts multi bike insurance.