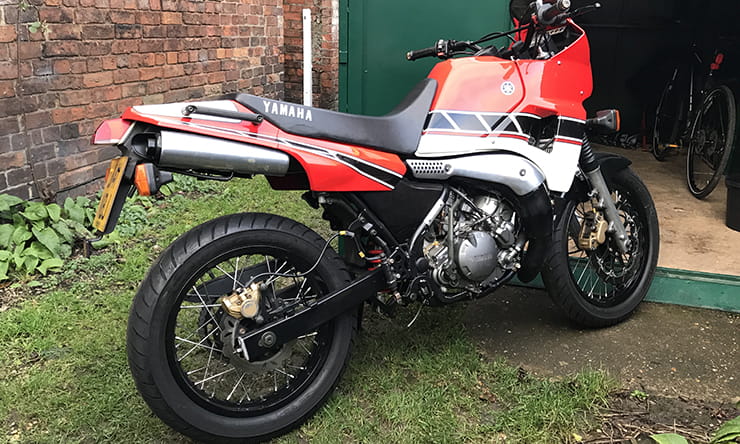 The launch of Yamaha’s latest oddball three-wheeled Niken should serve as a reminder that no motorcycle manufacturer does ‘bonkers’ like our friends with the flute factory. Up till the early 80s Yamaha was much like every other Japanese maker and then, from out of nowhere, we had the 20v FZ750, the V4 RD500, curiously-framed FJ1100 and loony tunes V-Max all in the space of 18 months. And just when we thought they’d gotten over it, Yamaha built this, the TDR250. It wasn’t a trail bike or a sports bike or even a proper supermoto. The TDR250 was and remains an absolute one-off and, in my opinion, it is still probably the most enjoyable motorcycling experience you can have. 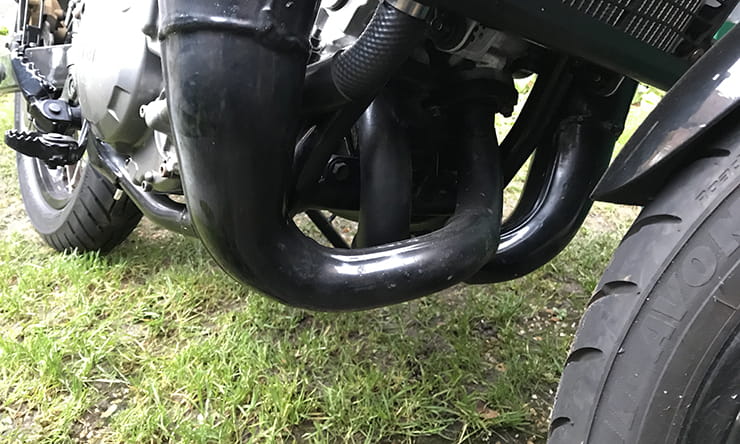 Making just 46bhp from its two-stroke twin-cylinder engine, the TDR isn’t all that fast. But it feels it because although benefitting from Yamaha’s midrange-boosting YPVS system, the TDR arrived before the clever digital ignitions and computer-controlled carbs that took the loopy out of two strokes in the early 1990s. That means it has enough bottom end power to potter through town (except no one ever potters on a TDR), a fat midrange that in reality is just getting you ready for the teeniest spurt of concentrated power that lights up your life at 6500rpm and lasts through five snappy gear changes till you and your micro-motorcycle are doing speeds in excess of not-that-many mph, but the rate at which you got there makes it feel like at least a million.

Putting the engine from their TZR250 race replica into an upright, wide-barred chassis was genius on Yamaha’s part. Resisting the temptation to build a trail bike was the icing on the cake though. While every other manufacturer got the supermoto thing wrong by using long travel off-road suspension, lumpy single cylinder motors and puny brakes, Yamaha got it bang-on by using firmly damped short-travel suspension, the same brakes and flexible-but-rapid (and tuneable) motor as the TZR racer and   small wheels that steered quickly. 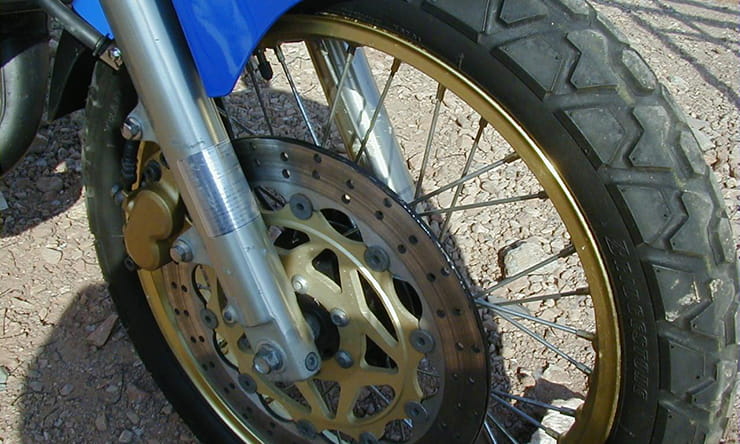 They also fitted twin underseat exhausts seven years before Ducati’s 916 and positioning the enormous expansion chambers lowdown and forward of the engine gave the TDR a unique weight distribution – absolute mass centralisation 15 years before Honda made it ‘a thing’. TDR250s didn’t have to handle at very high speeds because they never go that fast. But in low-medium speed corners you use the wide bars, lack of mass and that off-key weight distribution to plant the front tyre in a corner fully confident that it will stick every time.

Knowing this allows you to take huge liberties in traffic, safe in the knowledge that wherever you expect to end up the TDR will get you there. And the engine’s flexibility means you’ll have the shove to get you into the gap when you need to be there too. Riding a good TDR through town is an exercise in balance and invincibility that no other bike quite manages.

Most old bikes disappoint because they simply feel like worse versions of the latest models. But 30 years after it first arrived the Yamaha still feels exciting and relevant because there has never been anything else like it and a good Yamaha two-stroke is sublime - like when Honda take the time to make a proper inline four. 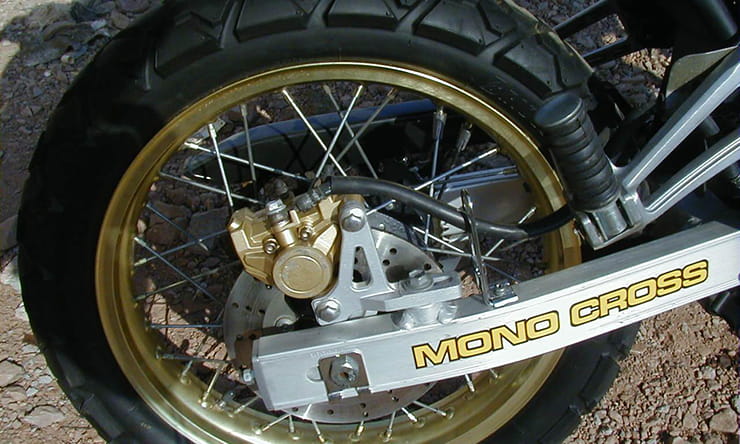 Ok, I’m sold, where’s the catch? Back in 1988 the biggest one was that no one in sportsbike Britain knew (or cared) what a TDR250 was. Or why this steel-framed pseudo trail bike should cost the same as the exquisite alloy-framed TZR250 (and not that much less than a pre-registered last-year’s model GSX-R750 back in early 1988). So few were sold. Added to this problem is that Yamaha’s build quality in the late 80s was slightly less robust than your neighbour’s 1998 Korean hatchback. The engines were superb, but everything else might as well have been built by British Leyland. Wheels corroded, spokes broke, indicators fell off, brake discs warped, bodywork cracked and suspension linkages seized.

By 1994 there were no good TDR250s left. They were saggy, rusty, badly-fuelling, horrible pieces of tat. When our local dyno operator ran mine he reckoned a typical example was lucky to make 24bhp. Somehow I got the last remaining good one – mine made 43bhp at the wheel -  but then I’d already owned half a dozen others and knew how to spot a decent example. In the 27 years since I bought my first one there have only been 34 months when I haven’t owned a TDR, but buying a good one is a nightmare.

By 1998 there were a few examples of Japanese-spec bikes coming in as grey imports. They were in superb condition and had an alloy swing-arm too (denoted by a yellow ‘Mono Cross’ sticker), but also came with a weird restriction that cut the ignition spark at high revs making them feel flatter and less exciting than the full power UK  bikes. 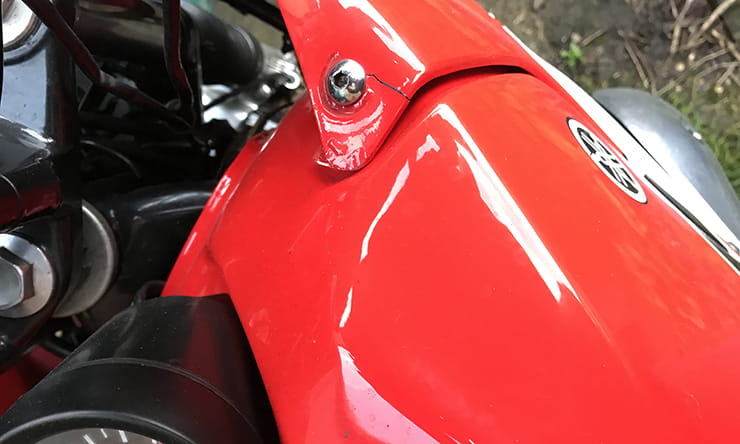 These days there are more decent examples about because a whole load of riders who ignored them when new have finally realised what they were missing and those tidy grey imports supplied plenty of parts to put tired bikes back on the road. Prices have rocketed in the last few years along with every other two-stroke 250 and you’ll be paying at least £4000 for anything that runs well and is basically ok. Look carefully and you’ll still find tidy grey imports around now. The blue bike in our photos was imported in summer 2018 by West Coast Imports in Minehead and has just 650km on the clock. 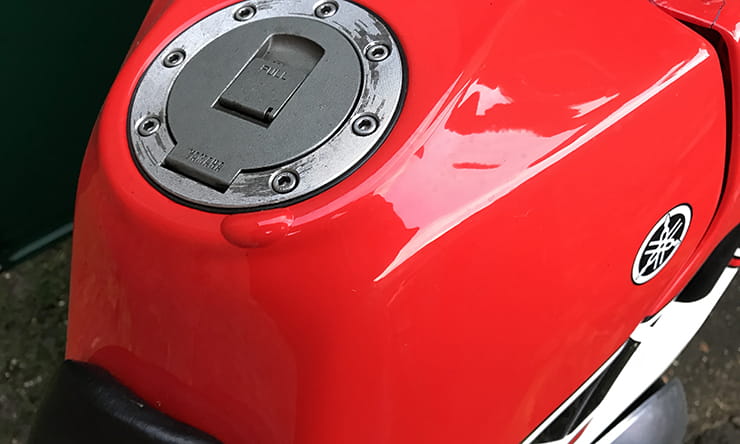 Common problems are often down to lack of use. Ethanol in petrol rots ancient rubber seals and fuel pipes. Rust in fuel tanks, while less of a problem than other models (because the TDR’s two-stroke oil tank is part of the fuel tank) still causes problems, especially around the rev counter binnacle. Suspension rarely gets the attention it deserves, brakes need a proper refit and many engines didn’t get the proper rebuild they should have (the bill for engine parts alone when I had mine restored was either £65.00 or £650 depending on whether my wife is reading this or not).

Like all old bikes expect the one you buy to still have a summer’s worth of stuff still to go wrong and need fixing. You will break down half the time you ride it and things removed and replaced in the rebuild will fall off again – that’s why they call it a shakedown. Turns out that the blokes at the Yamaha factory did know a thing or two about bolting bikes together – more so than you or the bloke who rebuilt it last year.

But, when the shakedown is finished and you reach the second summer your TDR250 will be as good as all the write-ups suggest. They really are that good. Impractical? Yes, beyond belief. Uncomfortable too, uneconomical, unreliable and expensive to run. 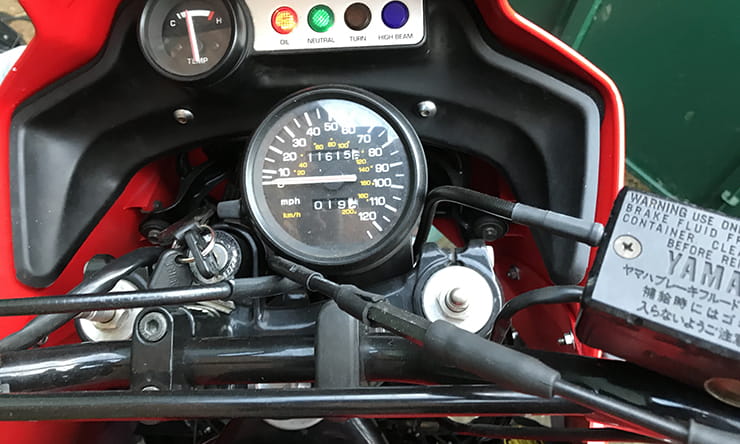 But you won’t care because every time you ride it you will fall in love with two strokes, motorcycling and riding like an idiot all over again. Take thirty years off your life for just £4000? It’s a bargain, trust me. 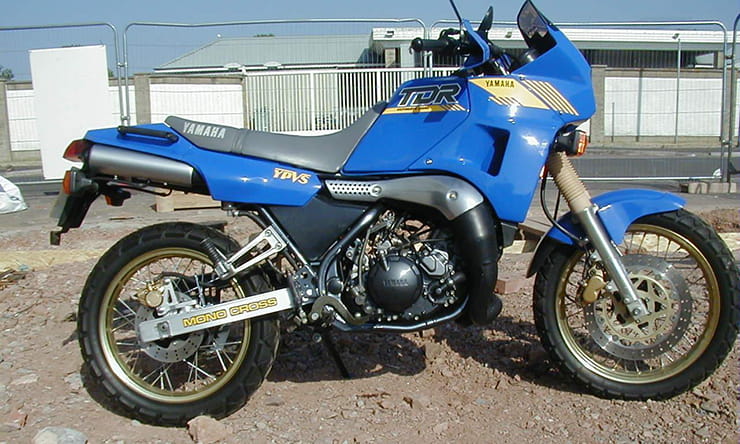