How to buy the best Ducati 916 | Expert advice 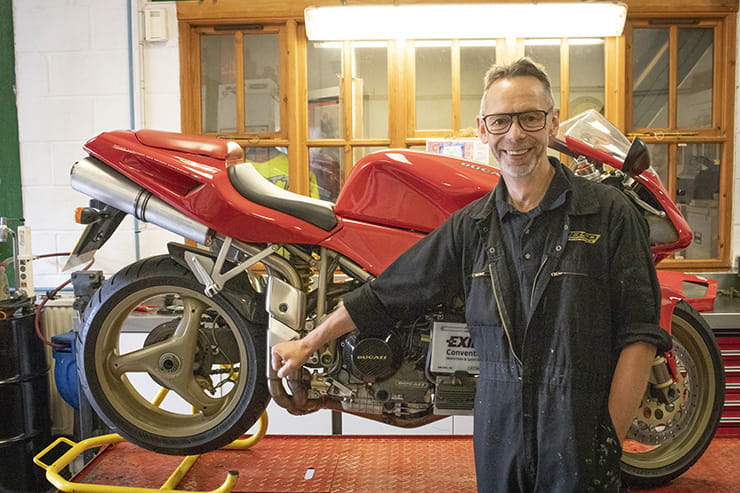 The Ducati 916 is arguably one of the most iconic motorcycles ever built. From its launch at the end of 1993 the 916 took the Italian company from niche brand to manufacturer of the world’s most desirable motorbikes. Dominating World Superbikes between 1994 and 2002 (and making Carl Fogarty a household name before ‘I’m a Celebrity’), the 916 also set the standard for road-going sportsbikes.

But if you find a Ducati 916 for sale, how do you choose the best one? Is it true that they’re full of problems waiting to catch out all but the seasoned expert? Will the electrics fail in a fireball of melted plastic? Is the elaborate Desmodromic valvetrain going to require a remortgage to maintain, assuming the terrifying cam belts don’t snap first?

We spoke to Ducati experts and race engineers Mark Brewin and Andy Cartledge at BSD to find out how you buy a piece of biking history for less than most new bikes on the market. For now at least… 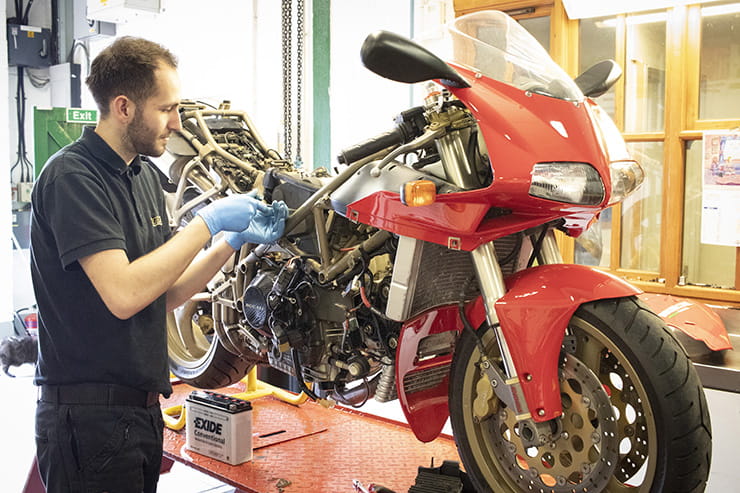 How to get the best deal on a Ducati 916

The first step to buying a classic motorcycle like the Ducati 916 is to decide what you want to own… are you after a mint-condition, all-original concours bike, or do you want a project –  a‘doer-upper’? You’re likely to pay handsomely for the former, so if you’re buying something with the intention of working on it, be realistic about what you can do yourself, and what it’ll cost you in professional labour (not to mention parts).

A project with cosmetic issues will be cheaper than one with mechanical woes, and how far you go with the intricate details will be decided by you and your budget. But you’ll still be able to enjoy riding it. The chances are that a bike that’s around 25 years old will have had a fair few owners, many of whom will have put their own ‘special’ touches on it.

Over time, scuffs and marks will have been repaired, and different owners could have had their favourite version of the Ducati logos and graphics applied; the purist will frown, but get the bike for the right price and you can change the graphics as and when you want.

The main thing is to buy a good book about the bike that gives you the full history – Ian Falloon’s Ducati 916 book, published by Veloce, is well worth the investment (and a fascinating read too). 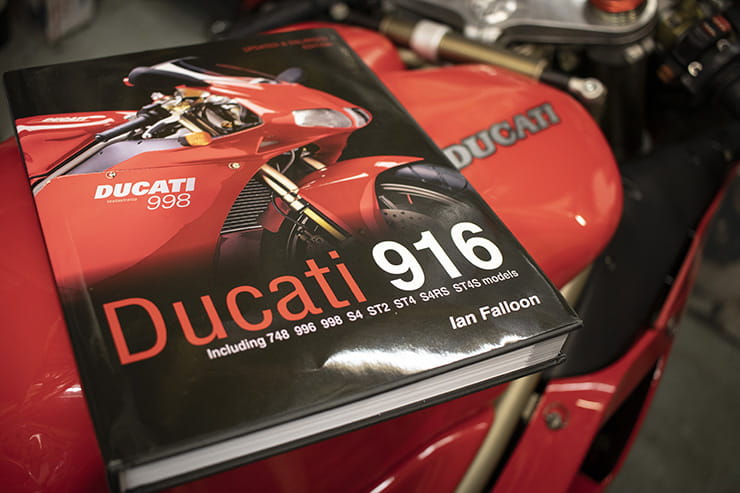 How to buy the best Ducati 916: Before you travel

As with buying any bike, the first thing to do is study the pictures of it, keeping in mind all you’ve learned about how it should look. If any pictures online aren’t very clear, don’t be afraid to ask for more – you’re not only looking to see that it’s what you expect, but also if any marks, dents or scuffs are visible.

Glean as much information as you can from any advert, then phone the seller to ask the right questions, before you go chasing around the country…

Buying tip: Use the DVLA’s MoT history check to see if a vehicle has failed its MoT at any point, or if there were any advisories on it. If it was getting advisories for the same thing every year, the owner likely didn’t care that much about it. Equally, if it failed on something, then passed shortly afterwards, the owner was probably happy to spend the money on getting repairs done (though if they really loved the bike, it’d never have been in a position to fail).

How important is a service history on a Ducati 916?

Routine maintenance is the most important thing on any motorcycle – not just a Ducati. Just because a bike’s been sat doing nothing for several years, doesn’t mean it doesn’t need looking after; as Andy says, “You should expect to spend a couple of hundred pounds on the bike each year to look after it. If you leave it for ten years, you’ll still end up paying about as much in the end.” Tyres have a lifespan, stale fuel will cause problems, plastic and rubber parts can crack and perish… 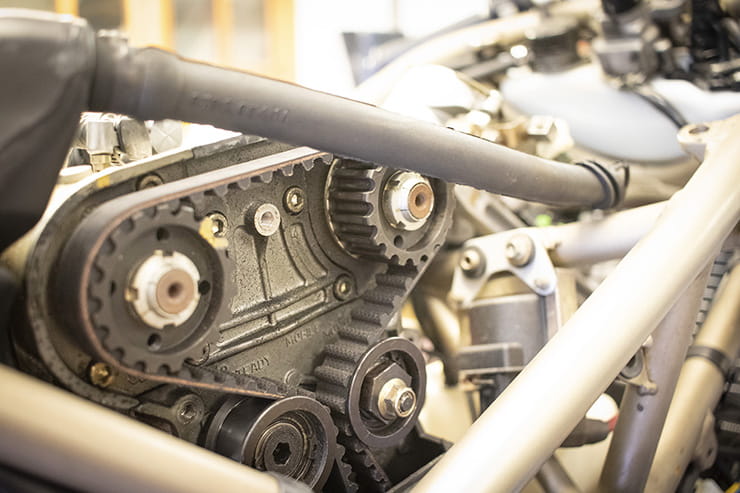 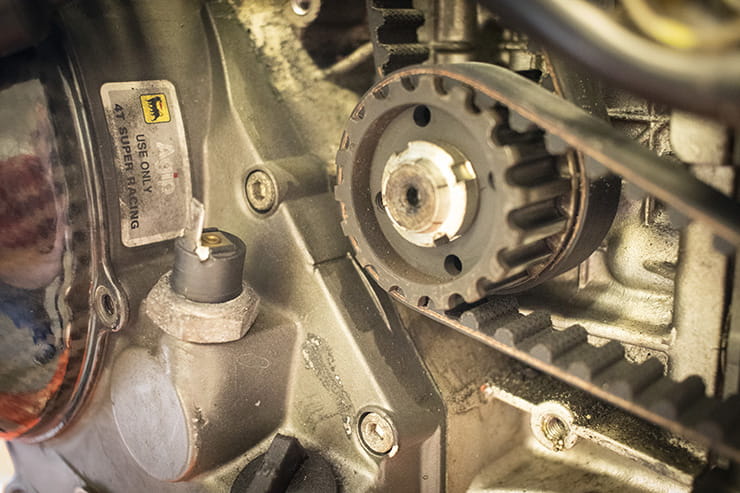 Ducatis are infamous for their cam belts, but they just need routine maintenance.

Are the cam belts on a Ducati a problem?

Ducati used to use standard belts, but soon shifted to ones with Kevlar reinforcement. They’re the same design as used on a Renault Clio, but any specialist will always strongly recommend the proper reinforced Ducati belts. As long as they’re changed regularly and fitted to the correct tension, there’s no reason they’d be any problem.

The bearings in the belt tensioner pulleys need to be checked every time the belt’s replaced – if they’re showing signs of wear they should be changed.

How to buy the best Ducati 916: First impressions

Assuming you’re happy after the phone call, the next step is to go and look at the bike. Always aim to do it in daylight, or if not make sure there’s a well-lit garage. From the moment you arrive, as with any motorcycle, look for tells:

How to buy the best Ducati 916: Close inspection 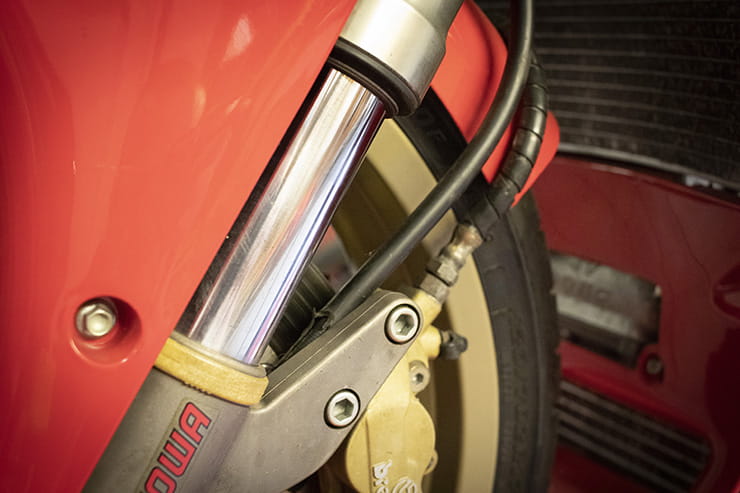 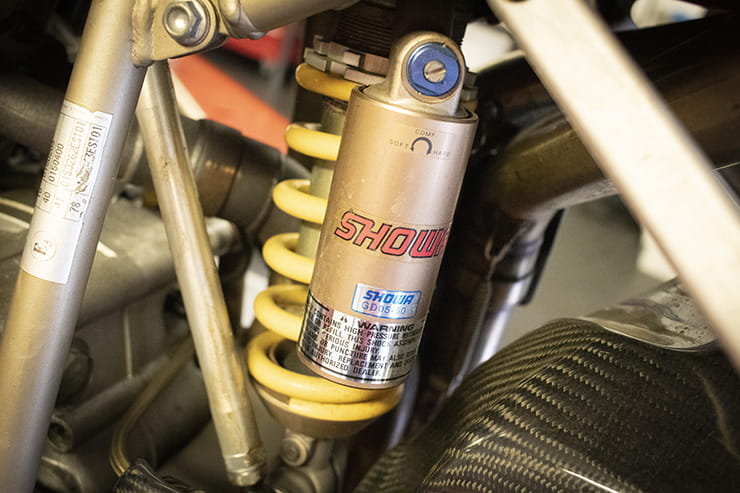 The suspension on this 916 is all original and in good condition. 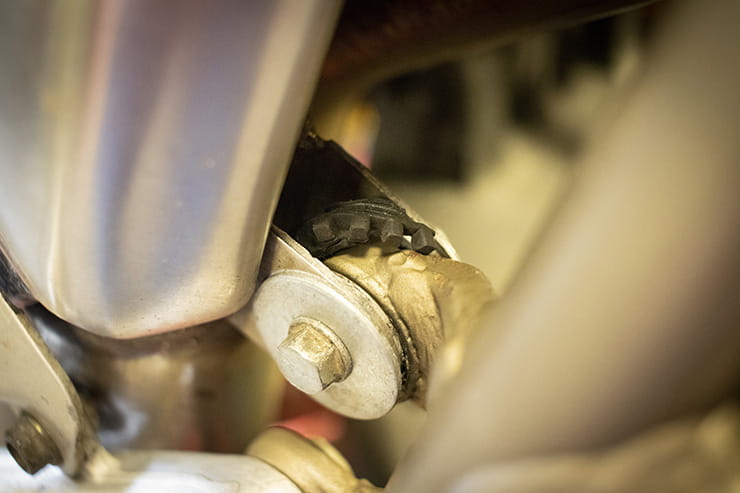 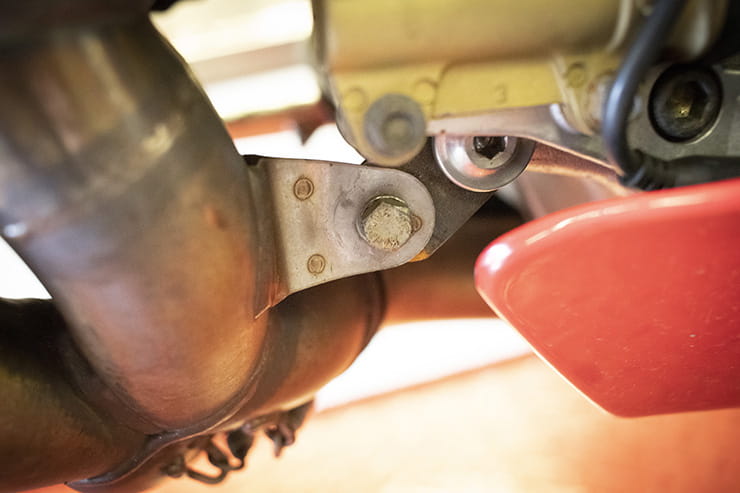 Distorted rubber grommets mean the part’s been taken off, but it’s not as obvious a tell as the incorrect bolt. 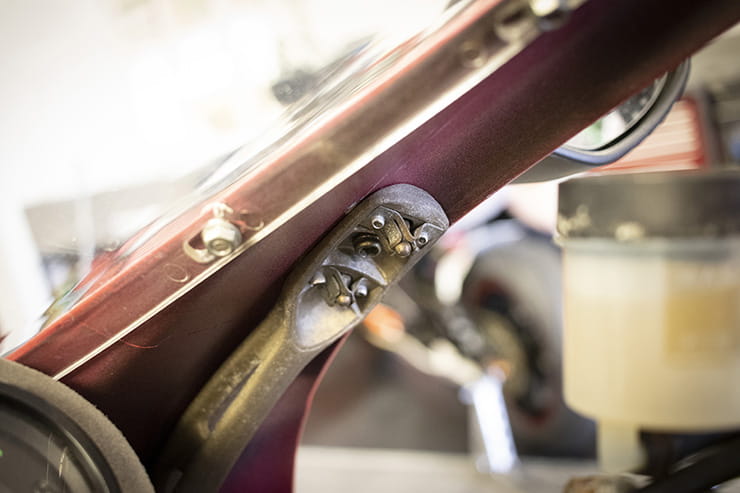 The bolt in between the two spring-retained pins on the back of this mirror isn’t the original, indicating that they have at some point been sheared off, or at least replaced. 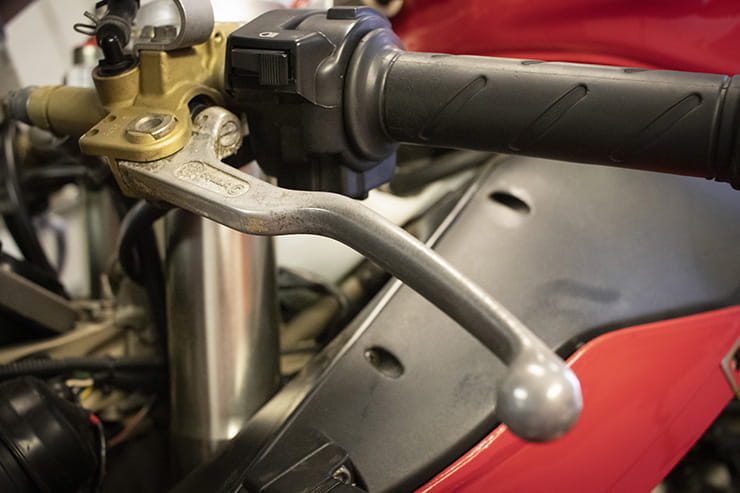 These are the original levers, so it looks less likely that this bike has been crashed (which is confirmed by looking over the bare frame). 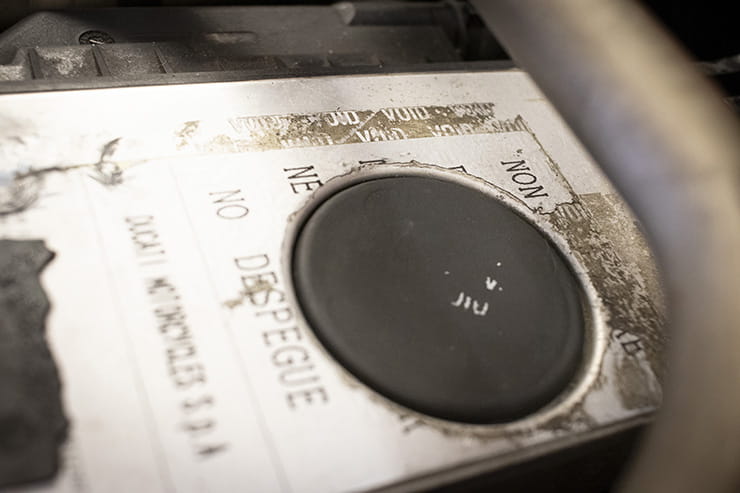 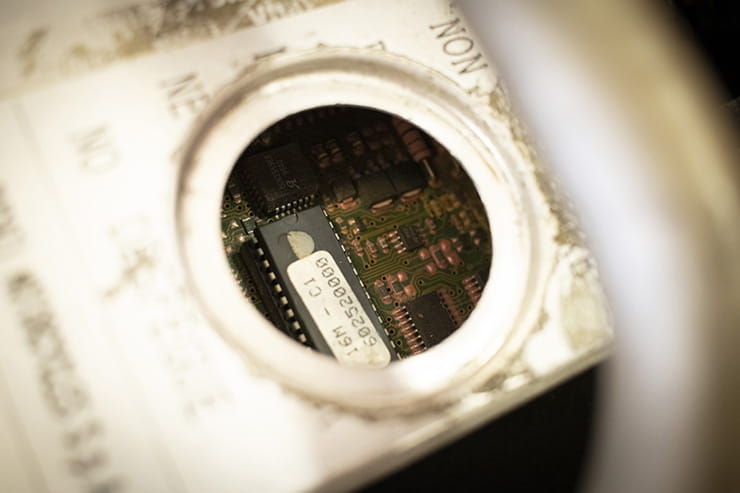 The ‘void’ text on the top of this ECU means it’s been opened up, likely for chipping. This is really common as the Termignonis that Ducati sold came with a new chip to drop in. It’s a sign that this bike has had a different exhaust at some point. The chip inside is the original, so the fuelling is back to normal. 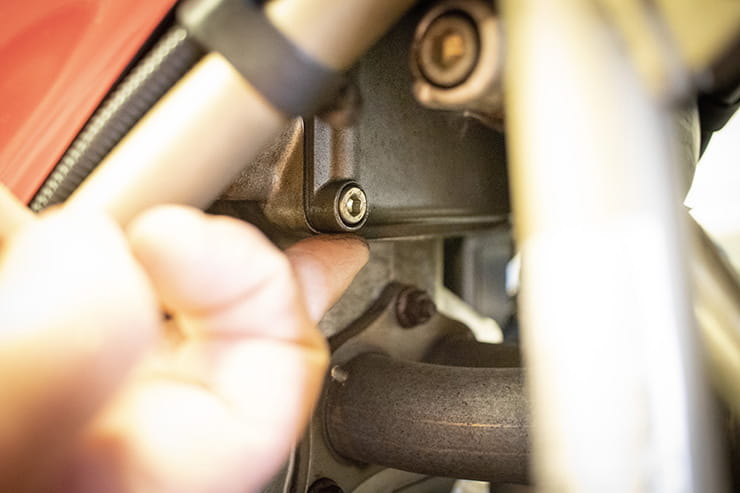 If you find oil, spend some time tracing it back to the source.

How bad are the electrics on Ducatis?

Ducatis aren’t the electrical nightmare that you might think, and if something does go wrong, it’s generally pretty easy to find as motorcycles of this age don’t have the horribly complex CANbus of modern machines.

Most of the main components are Japanese, and failures aren’t that common. More likely to be an issue is years of owners tweaking and adding extras, or poor installations of old alarms.

Check if the regulator / rectifier has been replaced as they used to be an issue – if it’s on a plain aluminium bracket it likely has. 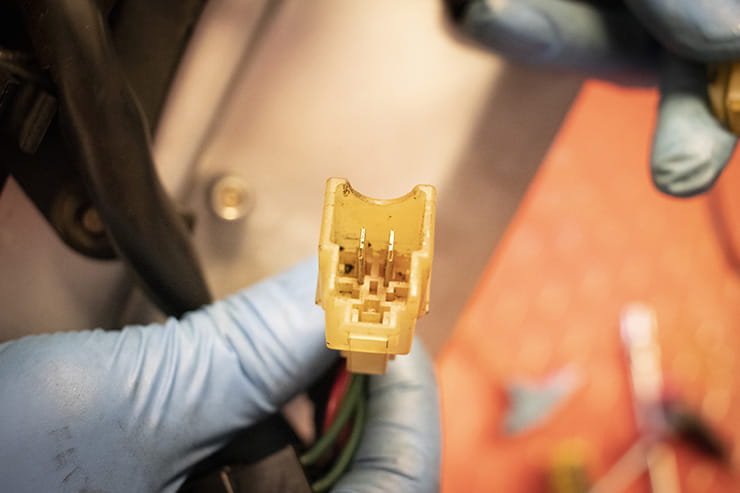 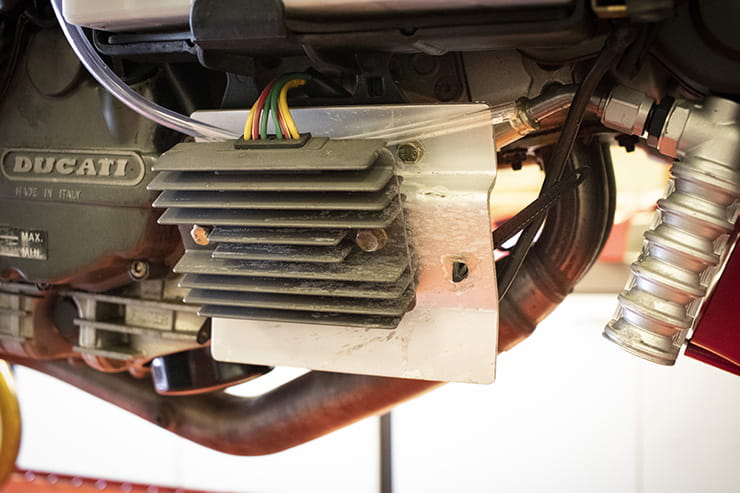 These connecters from the regulator/rectifier can get burned through heavy use – these are pretty clean, adding credibility to the mileage on the clocks. The unit itself is the upgraded replacement.

What are the other common problems / issues on a Ducati 916?

Maintaining a Ducati really isn’t much harder than any other bike, but there are a few things to be aware of… 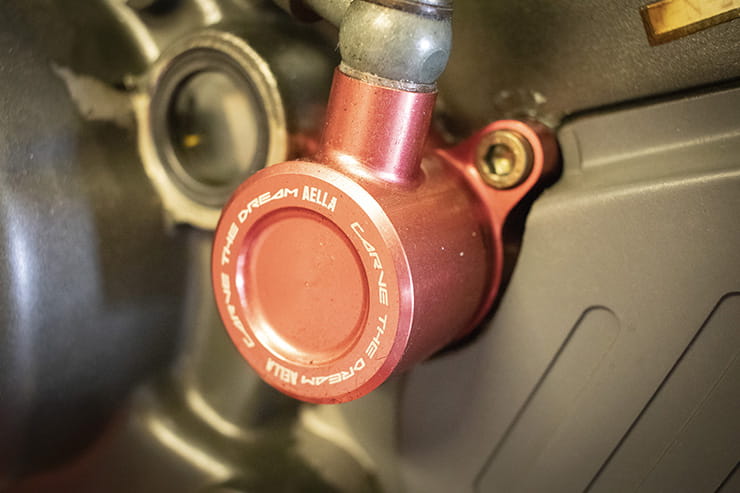 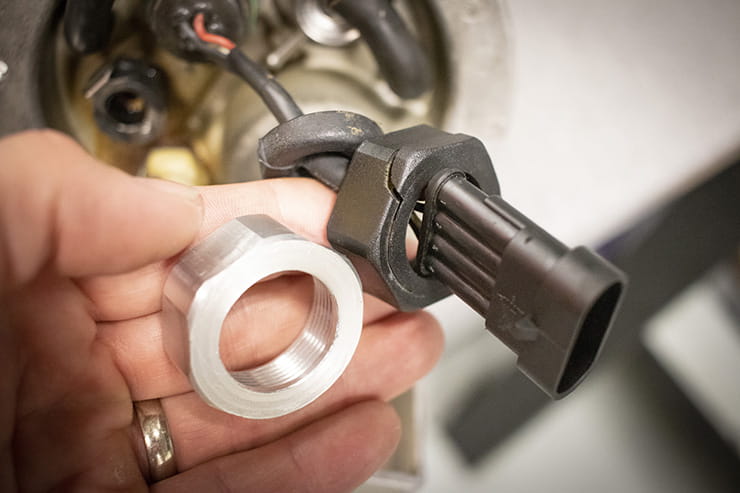 The plastic nut on the bottom of the fuel tank can crack – replacing it with an aluminium one solves the problem, though the connector on the wire needs taking to pieces to get the old one off and the new one on. 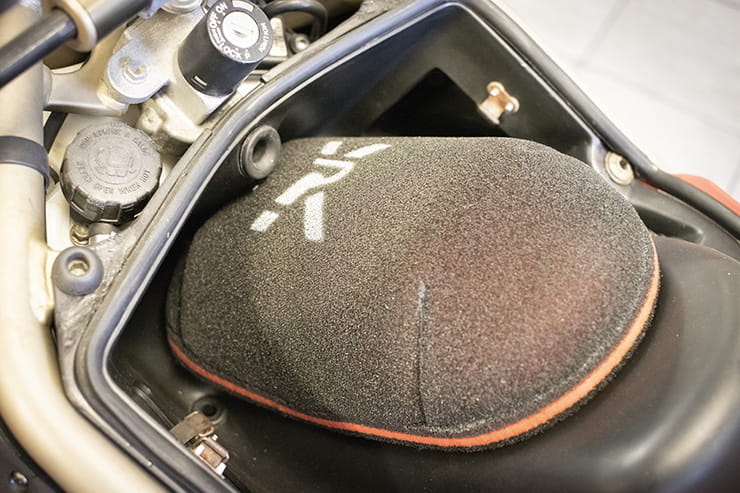 It’s not unusual to find an aftermarket filter like this Pipercross. 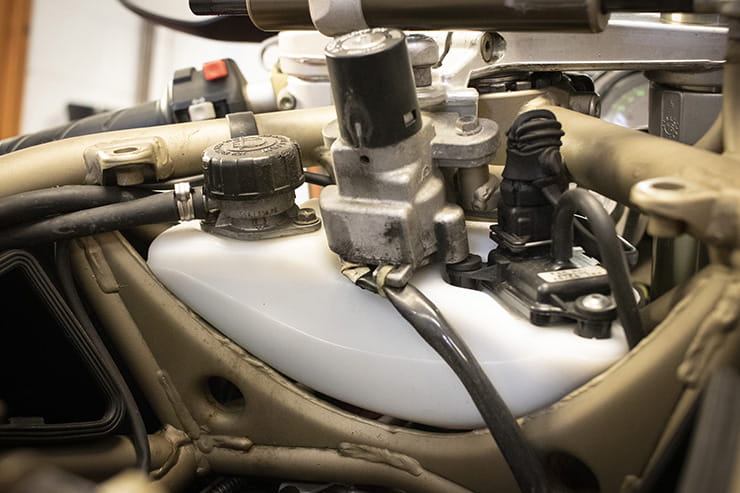 If the expansion tank cracks it can leak coolant. 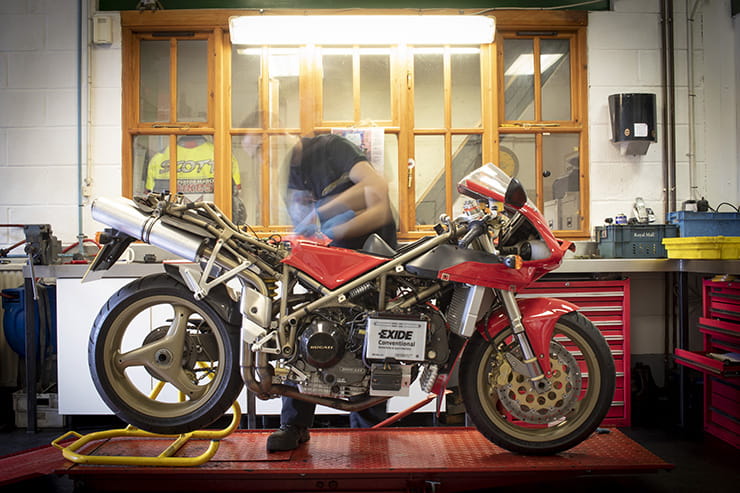 The Ducati 916 is actually relatively easy to work on; “The 888 was a nightmare,” says Mark, “but the 916 was a revelation – it’s so easy to work on everything, from removing the tank to getting to the belts.”

There is some specialist knowledge required in setting up the belts or adjusting the valve clearances, but if routine maintenance is carried out when and how it should be, there’s little to worry about.

“I work on 916s with over 50,000 miles on them,” says Mark. “When they came out there were a lot being bought in as imports by non-Ducati dealers who rushed what should have been a time-consuming PDR. Those machines sometimes had issues that the inexperienced dealers wouldn’t help with, so ended up having to go back to the official importers (then Moto Cinelli).

“If you service it properly, a 916 is no more bother than anything else. It needs loving, but if you don’t love it, it falls out with you…”

What’s the best motorcycle insurance for a Ducati 916?

Be honest about how many miles you're going to be doing on the bike; realistically you'll probably do fewer than 2,000 in a year, so get a quote based on that. Also look for a specialist classic policy; as BikeSocial’s parent company is Bennetts Motorcycle Insurance, we would of course suggest you get a quote with us, but as a leading specialist bike insurance broker, a policy with Bennetts Classic Bike Insurance gives you some of the best advantages – an optional agreed value, no admin fees for our list of 16 most common modifications, show and events cover, salvage retention options and multi-bike policies (which can include modern machines). You can get a quote for classic motorbike insurance by clicking here.