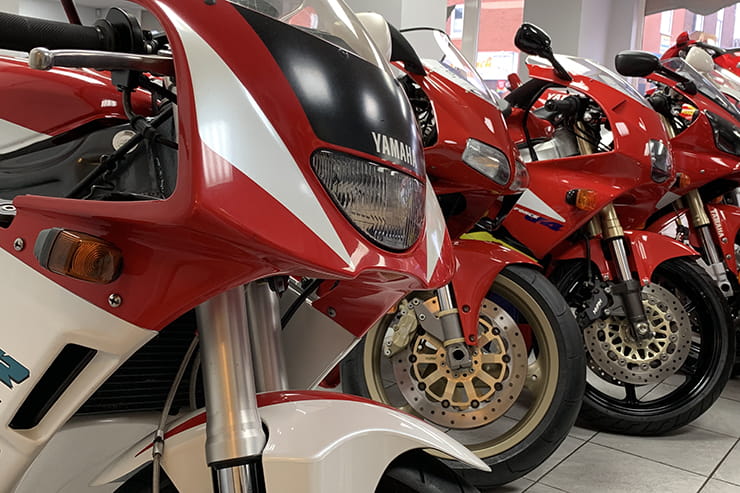 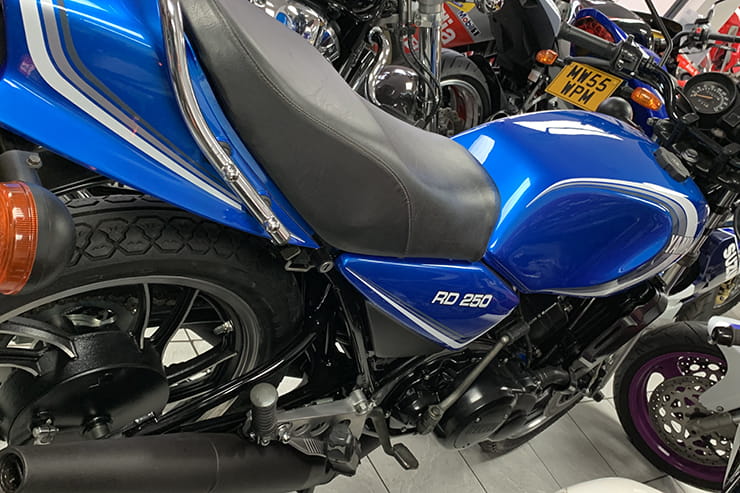 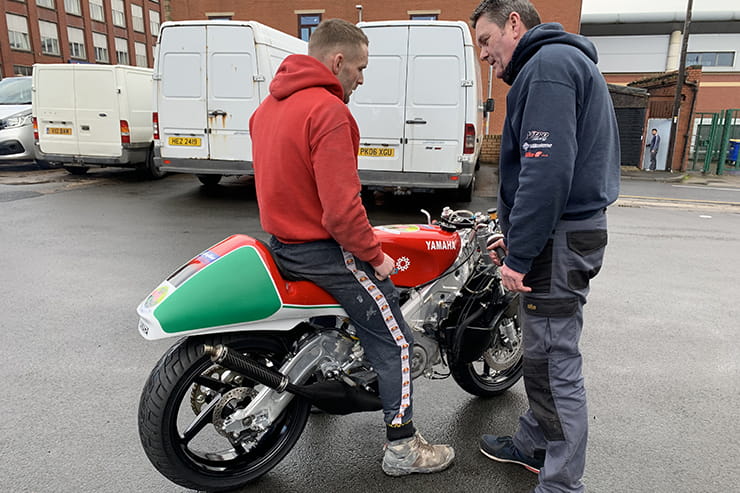 The sound is unmistakable. Even through the noise of the busy main road and sleepy ears that have been on the road since 5.30, the rasp of a racing two-stroke twin being warmed up beats any alarm clock I’ve yet to hear. Fastline Motorcycles in Preston has a lot of history with racing strokers. It’s a family business and the Mitchell brothers at the heart of it have either been there either on the start line (Kevin Mitchell ran a privateer Harris YZR500 in GP racing’s golden era) or as sponsors (they were Neil Hodgson’s first major sponsor among many) since the late 1980s.

The race bike is a 2000-model Yamaha TZ250, being prepped for local scooter racing champion Lee Bamber’s first season on full-sized wheels. Also lined up outside the workshop are a honda NS400R and CB-1 400, an NSR250 with the tank off and a VTR250. 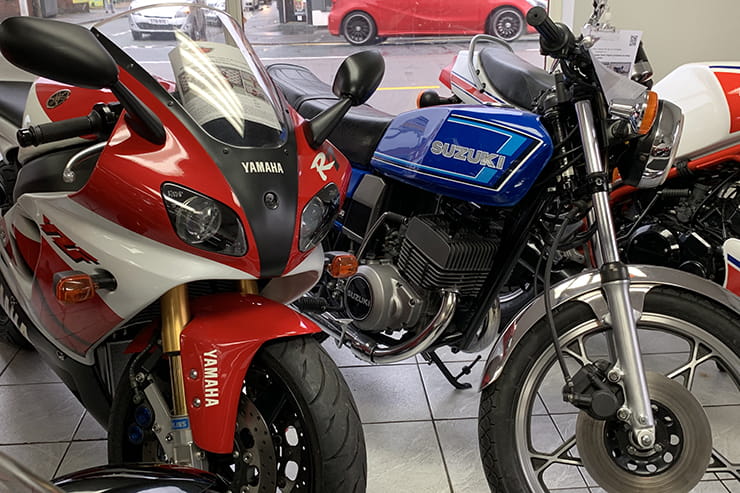 First and foremost Fastline is a bike shop…with a difference, and that’s why BikeSocial is here. Fastline are at the forefront of the modern classic scene. If you’ve recently come over all nostalgic for an 80s or 90s motorcycle and you prefer the idea of buying a tidy, original, properly serviced example to restoring a project or spending top money on an expensively restored show-pony, then chances are you’ll have come across Gary Mitchell and his team at one of the big classic bike shows.

The bikes in the showroom are a mixture of handpicked imports brought in from (mainly) Japan and a few interesting UK models, mostly distinguished by being low-mileage and showroom condition. When we went to visit there were three Honda NSR250s, an NS400R, pristine VFR400R NC30, and equally perfect RVF400 (both sold to an American collector), a rare-as-hen’s-teeth Yamaha YZF750SP, couple of TZR250 V-twins, FZR400, RD350YPVS and RD250LC, a couple of YZF-R7s, half a dozen immaculate Ducati 748/916/996, Kawasaki H1 Mach III and an ultra-rare KR250 tandem-twin.

The above bikes make up around half the showroom stock, but Gary tells me he has another 25 bikes in storage, ready to go on sale, another 29 currently on the boat from his last trip and he’ll pick up another 40-50 bikes on his other trips out there later in the year. 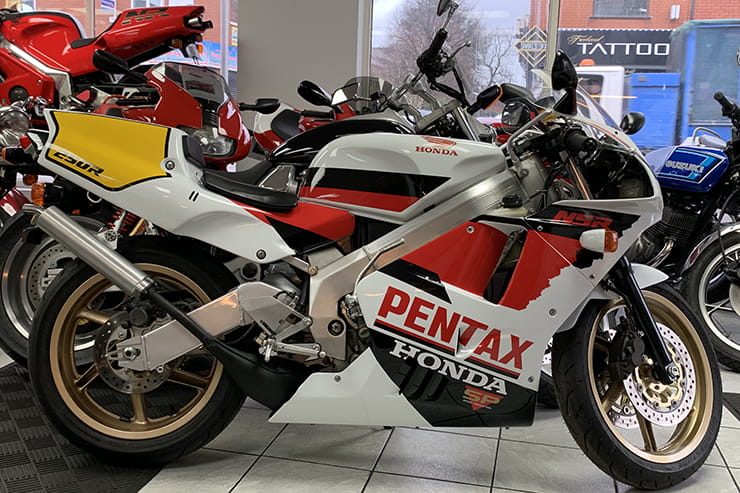 “It’s getting harder to find really good examples of the 250 two-strokes now,” Gary tells me. “The Japanese buyers that didn’t used to be interested are starting to get nostalgic. There are good examples out there, but you have to be patient and you have to be out there in person, dealing with people you know and trust, otherwise, it’s easy to end up with stuff I wouldn’t personally sell. And when you do find the right bikes, the weakness of the pound makes them expensive. The last Suzuki RGV250 VJ23SP (that’s the very last model of RGV that Suzuki GB never imported) cost me more than £10,000. It might have been immaculate but there’s only so many customers out there with the money to buy one of those.”

I’ve been lucky enough in my job to visit an awful lot of bike shops and, there’s a certain kind of dealer that have learned how to get it right. Places like this are all about getting the right bikes at the right price and giving the kind of service that keeps people coming back. Having someone like Kevin Mitchell as just one of your two-stroke specialist mechanics, for example, makes a huge difference. They know their customer, trust in their plan and stick to it, even if that means they aren’t always the cheapest. On the wet Friday morning in February when BikeSocial visits, our conversation is interrupted by a steady stream of people (men, mostly, all of a certain age, all with it seems, at least half a dozen bikes, most of which were bought from here) popping in to say hello, see what’s new and pick up a spare part or drop something off for repairing/plating/painting. 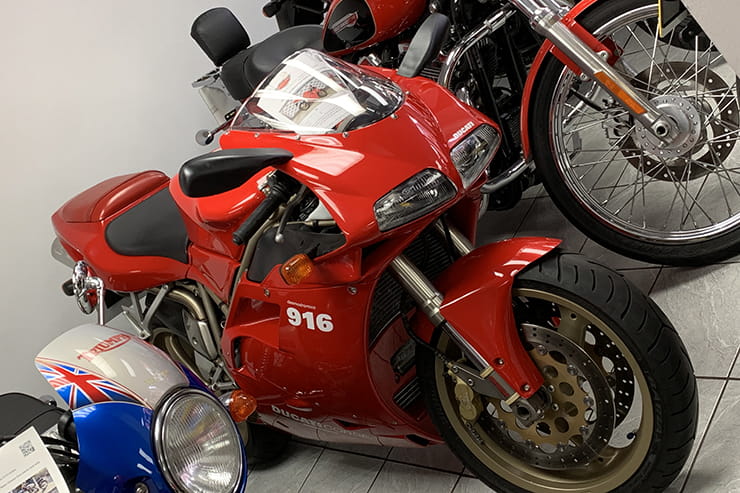 It’s been a while since I was last here and the biggest change is the number of Ducatis in the showroom. Gary explains, “With the scarcity of good two strokes – and even the sporty 400s - in Japan, we’ve broadened what we sell. Ducatis are good business now and we have a factory-trained mechanic in the workshop, so we can prep and service them properly. We come across some lovely examples and the prices over here are strong enough now for it to be worth our while bringing them in.”

While Gary sorts another customer I take a wander round the showroom, drawn to the Yamaha R1-Z (a Japanese-market naked roadster with trellis frame, like a Ducati, TDR250 engine and GP-style exhausts both exiting on the same side) like the one I owned briefly about 20 years ago, only much tidier. And then there’s the YZF750SP – the forgotten WSB special and basis of the bike that brought Nori Haga and Colin Edwards to prominence and Niall Mackenzie won three BSB titles on. This one is spotless, with just 14,000 miles on and at £6499 is a fifth the price of an RC30, despite being much less common. 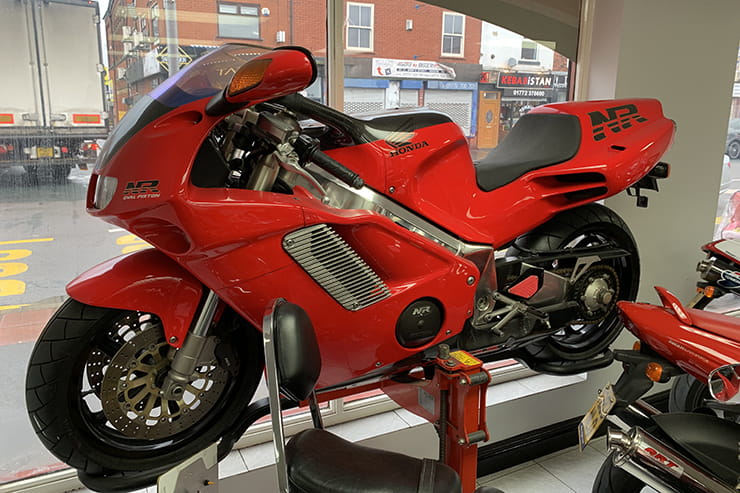 Zero miles Honda NR750; If you want a test ride, bring the appropriate paperwork – a winning lottery ticket should do fine.

I’m chatting with one of Fastline’s customers about price – he’s got an interesting perspective. “I’ve bought a few bikes from here and, to be honest, I don’t view them as expensive. Compared to a private-sale bike on eBay, 200 miles away with a few blurry pictures, maybe they are a bit more. But eBay is getting expensive – there’s a lot of chancers on there, asking more than the dealers and half the bikes don’t sell anyway. The stuff here is original, in very good condition or better and the guys in the workshop do a proper job before the bike goes out. I trust them.

The shop is getting busy, time for me to leave them to get on with it. As I get ready to leave the Yamaha race bike has been replaced in the workshop by a Honda NSR250 MC21, now also being warmed up with that hypnotic, ‘bring-bring-bring’. 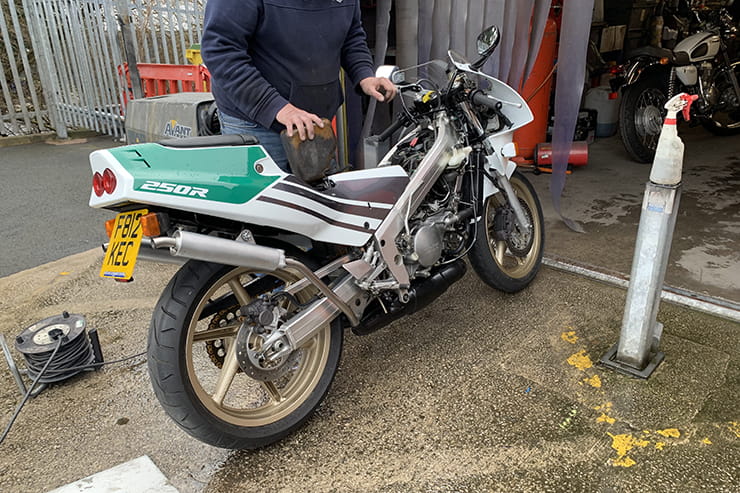 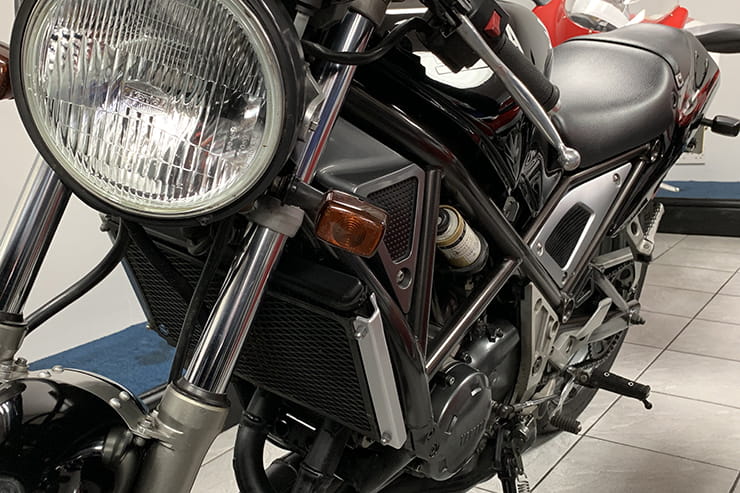 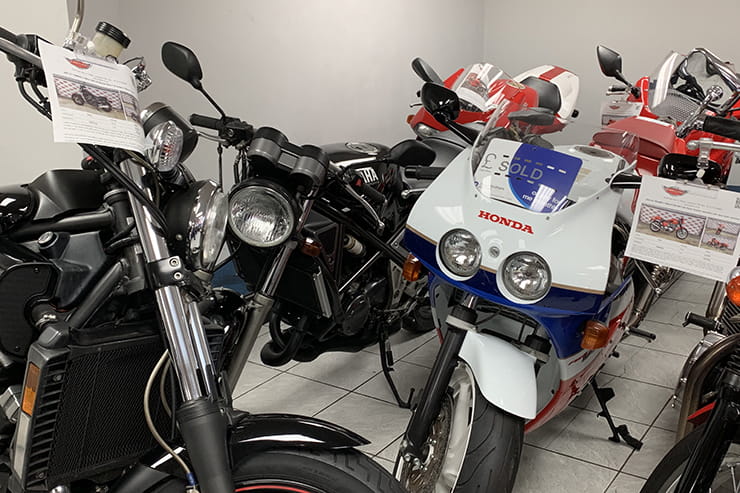