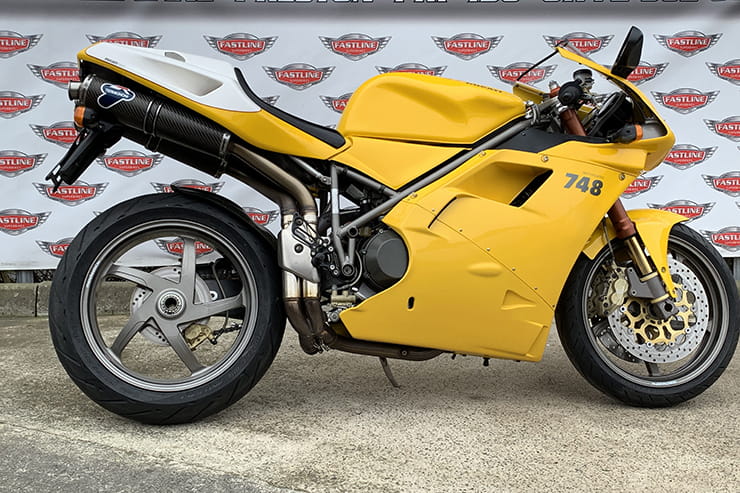 Ducati’s 916 deserves all its iconic status and then some. But for many people who were lucky enough to ride both, the smaller 748 was the better bike to ride. It’s a long-running Ducati trait – the 750SS was more enjoyable than the 900SS and the later 749 was almost the perfect early-noughties sports bike where the 999 was grumpy, difficult to ride and needed to be going a lot faster than we actually went for it to work properly.

The 748 came out a year after the original 916. It’s easy to think of it as a sleeved-down 916, but the changes are much more than that. Bore and stroke are both different, the smaller capacity loses a bit of bottom-end power, but the lighter flywheels allow the 748 engine to rev much faster meaning the lack of bottom end doesn’t really matter.

It feels like a very different bike and, bizarrely, while the 916 feels like a massive, powerful engine has been stuffed into the chassis of a 250, the 748 feels like it has exactly the right engine for the chassis. 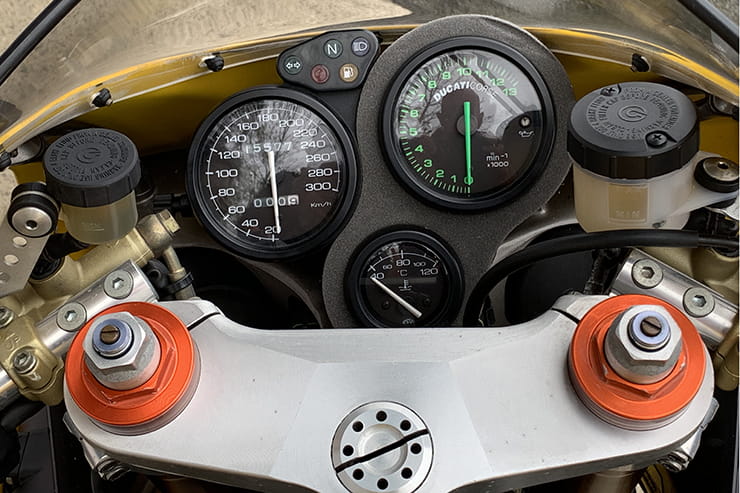 Looking at the numbers a Ducati 748 struggles to compete with a late-90s CBR600 at a quarter of the price (or less). 90bhp at the rear wheel, 20kg more mass than the Honda and a reputation for lunching most of the significant parts in a big way at some point. Finding a good 748 is tricky these days (as is finding a good 1998 CBR), but if you do, you’ll be amazed at just how good this bike can still feel.

It starts as you approach the bike. Still beautiful, still special. Love the simple clocks – no redline on the tacho – and the recessed ignition barrel. Push the button while willing the lazy starter on as it rips the engine into life. There’s a lot of mechanical noise – mostly from the dry clutch but also from the top end of the engine. Anyone who’s spent too much time on Ducati forums will now be worrying about knackered rocker arms, but the truth is that most have been fixed a long time ago.

Climb aboard and remember that tiny, waspish feel of Ducati’s mid-period superbikes. It feels like a 400 and even after all these years I still don’t understand how a 748 weighs as almost much as my 2002 Yamaha Fazer 1000. The heavy clutch is still horrible and numb as you release it like a road rider. I’m guessing the racers didn’t care because to them a clutch is a switch to be used once and then forgotten, but to me, using it every few minutes at junctions it’s a big part of the experience and not a good one. 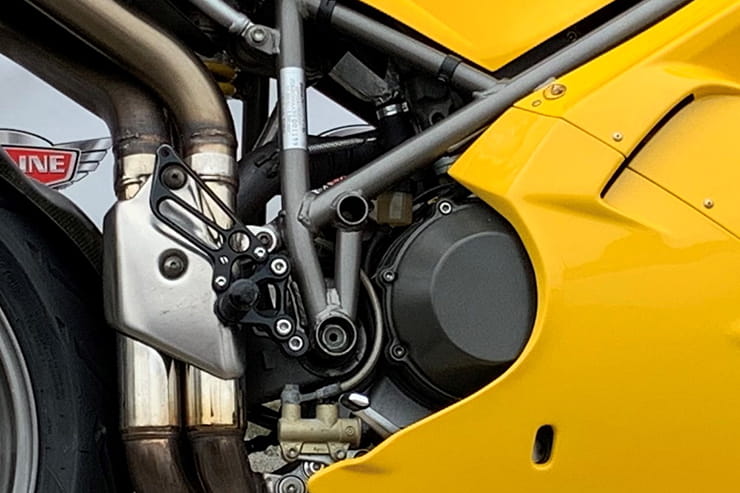 Clutch is noisy and grabby and a pain in town. Sorry, they’re all like that.

Thankfully the rest of it is as good as you remember. The engine is stunning – powerful, strong and eager to rev. It feels more like a sports bike than the bigger Ducati twins and you use a lot more of the revs more of the time. Thankfully it still has that very direct and precise connection between throttle and experience – feeling like you can dial in exactly the right number of revs and always driving hard when you expect it.

Like the 916 though, the engine is simply part of the bigger emotional experience. Everything about these bikes is intertwined. The riding position brings focus in the same way as the brakes and suspension bring confidence to hold onto the revs for slightly longer, brake a little later and harder, hang off a little further and turn with a bit more force.

Which is a good thing because despite the 748 feeling like a 400 it weighs 30kg more than one and needs a good shove on the bars to turn quickly. Road testers of the time worked themselves into a frenzy about the ‘at-one-ness’ of the 748’s relationship with its rider. And they were right. The engine’s additional raucousness along with the chassis’ flickability (748s had a slightly narrower back tyre than the 916) makes for a beautiful handling bike when you’re in the mood. 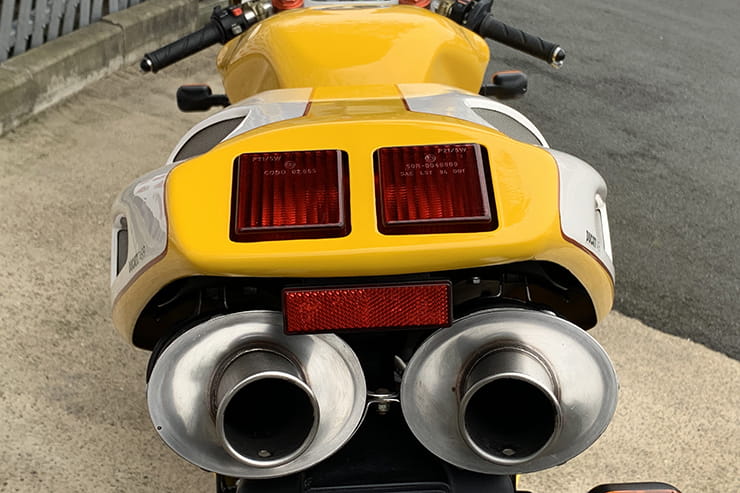 This is where the noisy fairy lives

Sadly, when you’re still a bit hungover or just realised that your 1990s leathers don’t fit as well as they used to, it doesn’t take too long for the amount of focus required to enjoy a 748 to get frustrating. Even worse if your house is fifteen miles and a couple of town centres away from your favourite twisties because by the time you get there you’ll be grumping, hurting and have double vision from trying to look at anything other than a set of 748 instruments.

The 748 you’d have bought ten years ago would have cost £3000 and have been a disastrous money pit waiting to reveal many expensive problems. Thankfully in 2019 most of them have been sorted and those that spent a few years as track bikes have been put back on the road with all the regular issues a distant memory. As always with Ducatis a bike with a proper, detailed service history is worth £1000 more than one without, whatever your inner skinflint says. 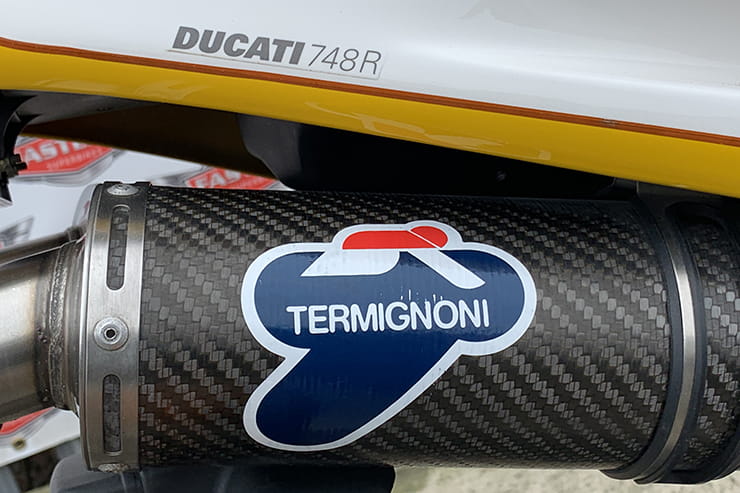 In a seven-year model run there were several different variants including the slightly-more-racey and focussed S, SPS and R versions. You’re better off buying a good standard Biposto than a tired S, SPS or R version and the tricker versions are harder to value and therefore easier to over-pay.

Watch out for mismatched panels, ECUs that have been chipped for aftermarket pipes that are no longer on the bike, crash damage (check the frame bracing behind the headstock for creasing) split radiator header tanks, warped or damaged wheels (they were made from a notoriously soft material that doesn’t like wheelies or kerbs). 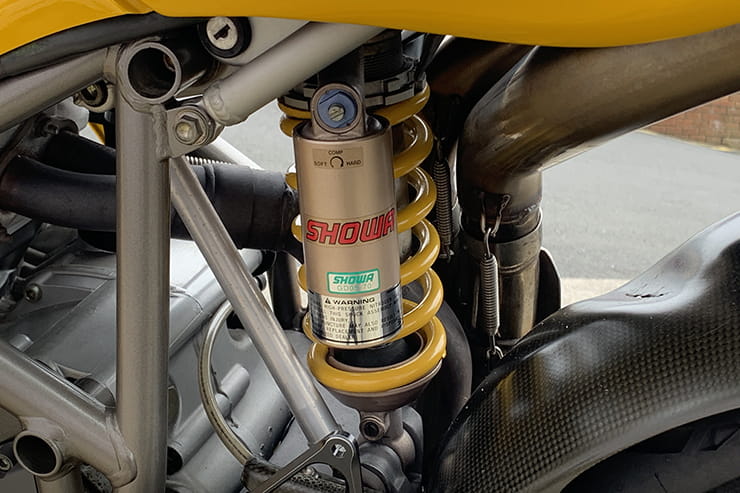 Unlike the 916/996 special editions, the 748R doesn’t get Ohlins suspension

But also, be realistic. This is a 20-year-old motorcycle built by Italians-in-crisis. They were ramshackle when new, have been through the hands of at least one track-day hopeful and mostly neglected for most of the noughties. The 748 you buy will not be mint or mollycoddled or immaculate from anything closer than ten feet. It will never have the classic kudos of a 916 even if it is a better bike to ride. So, buy one to ride, choose a bike with a decent engine and well-maintained chassis and use the dodgy bits that you spot as a way of knocking money off the price.

There are plenty of reasonable 748s out there, so take your time to find the right one. And don’t forget to ride it – an unridden Ducati is a whole load of problems waiting to happen. 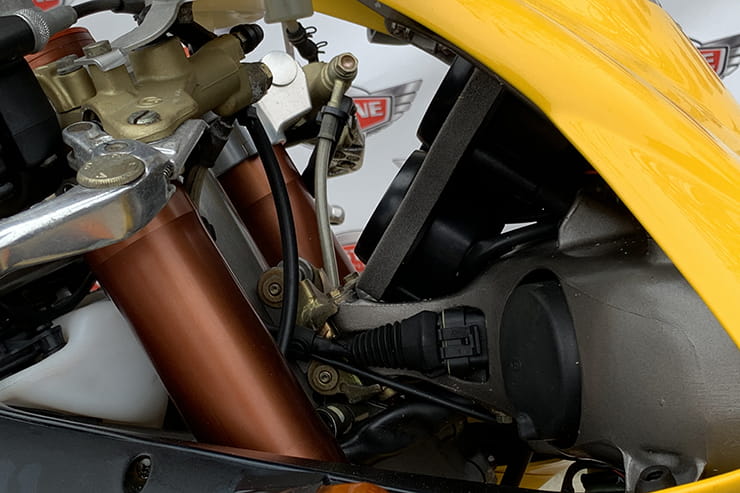 Not many still look this clean. Check for creases in the frame bracing - a good indicator of previous crash damage