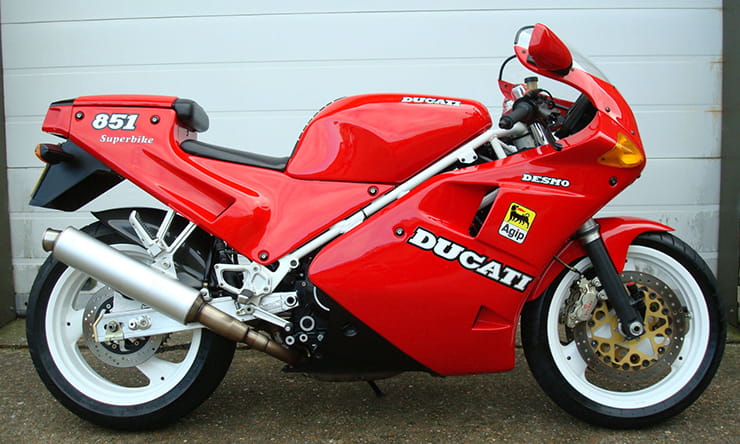 Ducati’s 851 might not have shifted many units but it still managed to change motorcycling, save Ducati and make Superbike racing ten times more interesting. Buy one now for less than £10k.

All Ducati’s big sports twins are special. But not for that indefinable ‘character’ stuff or even for their phenomenal racing pedigree. What sets the Bologna racers apart is their enthusiasm for new technology, excitement at embracing new ideas and willingness to be the first, even if that winning edge didn’t always come with 100% reliability.

Every generation of Ducati twins had something. The first 851 (Ducati’s first watercooled engine and first with 4v heads too), turned fuel injection from an interesting technical quirk to a performance must-have and solved the challenges of fuelling a big twin without the need for enormous carburetors. The early SP models brought race-quality suspension to road legal machinery and the 916 series turned motorcycles into art while out-performing a generation of Japanese race replicas with a fraction of the horsepower. The 999 was the first bike with can-bus electronics, the 1098 had built in datalogging and the 1198 made traction control a performance, not safety, aid. By the time they got to the Panigale, the motor had 52% more cubic capacity than the 851, revved 2000rpm higher and made more than twice the power, while weighing 14kg less and being much more reliable. 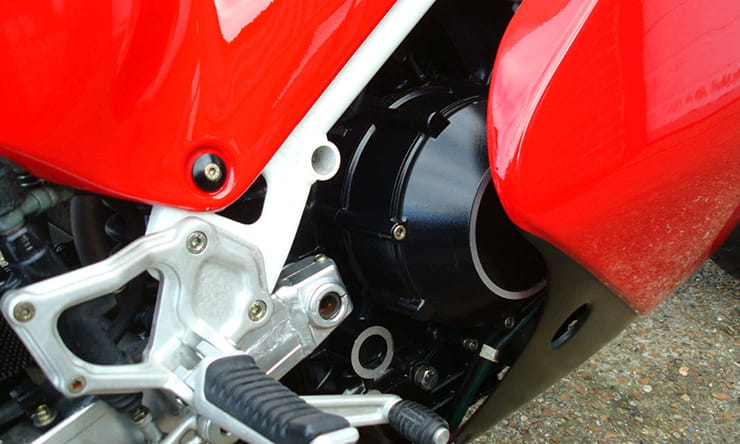 Every Ducati sports twin will be a classic one day, but the original 851 is the one that matters most. If you were watching racing in the late 80s you’ll remember the confusing scenario of Japanese Factory race bikes screaming at a million rpm being overtaken by a blood-red motorcycle that sounded like a Citroen diesel van with a rotten exhaust. Suddenly, twins were exotic and desirable, while fours were common and disposable. The idea that a company on the verge of financial crisis like Ducati would go racing in World Superbike was almost as crazy as the notion that Bimota (who were equally fragile) would almost win the 1988 title. But it happened because Cagiva, who owned it at the time had racing at their heart. Without WSB Ducati would have been lucky to survive and motorcycling would never have rediscovered the charms of a couple of huge alloy slugs, turning fossilised trees into rapid forward motion. 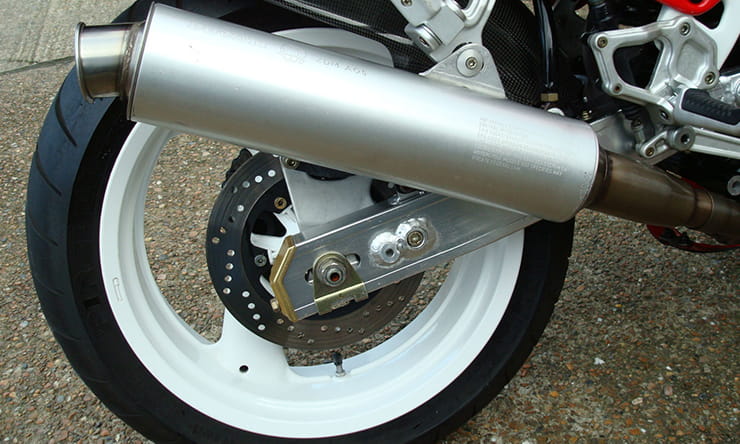 There was talk of big twins being able to find traction where fours couldn’t because of their power-pulses. It didn’t matter that none of us knee-down-wannabees, still wearing combat pants and a bomber jacket had any idea what a power pulse (or traction for that matter) was - overnight, we all wanted a Ducati twin.

Even now, where modern sports bikes feel either all-too-easy or overwhelmingly fast , the 851 is a rewarding-but-challenging ride at sub-100mph speeds. The 8-valve engine feels mechanical, like it has cannonballs in the cylinders instead of the rocket-powered tennis balls of the Panigale.

Owning and riding a Ducati 851 requires the kind of commitment usually reserved for hardcore, hardtail chopper riders… who like touring. And spannering. And spending the odd half-day on a hard shoulder waiting for the AA. If the idea of doing triathlons seems a little wimpy for you, then buy yourself an 851 to commute on. 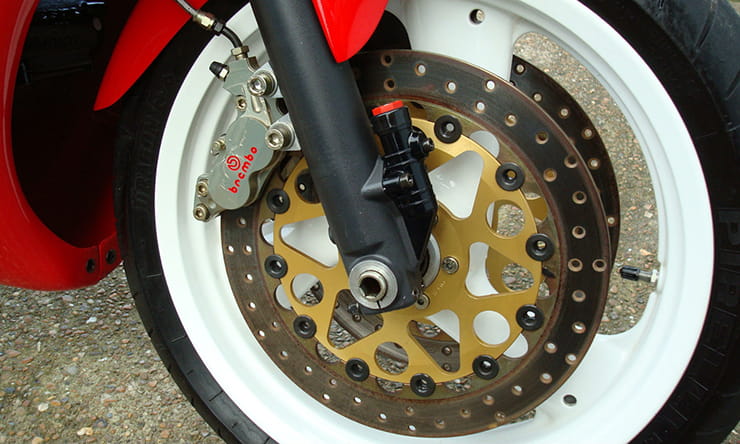 The heavy throttle, heavy clutch and teeny-weeny steering lock combine to make the 25 miles from your house to the fast and swooping A-roads where it thrives as memorable (for the wrong reasons) as the joy of unleashing it when you finally get there.

There’s not a lot of room between the bum pad on the pillion cowl and the back of the fuel tank, so instead of hanging off, you tuck in and take wide fast, classic arcs through corners. The 851 seems to need half the lean angle to go faster through the corners than a modern bike and it rides on surprisingly controlled suspension for such an old Italian bike.

At least a good one does. Normally, a bike of this age needs a little rose-tinted memory to overcome the effects of sloppy bearings, leaking seals and 18 year-old fork oil. The last one I rode was horrific, the one before that was amazing and if you think bike engines have advanced in the last 25 years, it’s nothing compared to the brakes.

The 851 is not as desirable as a 916, but there’s a lot less choice too so finding a good one is much harder. Knowing what you are buying is essential. The late 80s and early 90s were as challenging for Ducati’s accountants as their engineers and many bikes had components supplied by whichever company was still supplying credit at the time. Which means some bikes have Marchesini wheels, others have Brembo, some have a 5.5inch rear wheel, while others have a five-inch item. Some bikes have conventional Marzocchi suspension, while others have upside down forks or Öhlins. 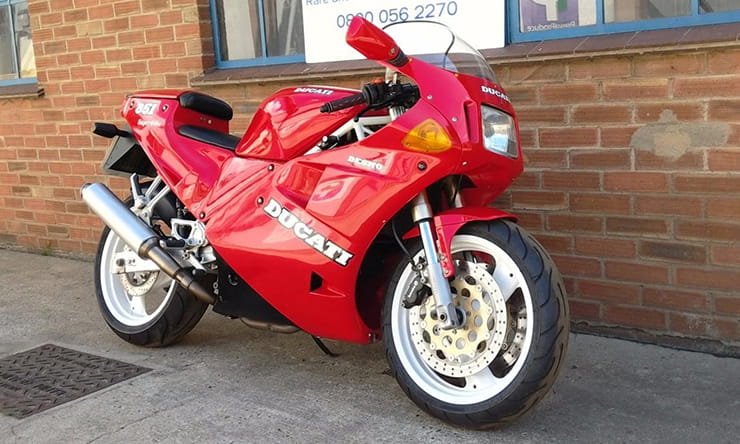 And that’s before you get into the question of whether it’s a DS (dual seat) or SP model. And just when you think you’ve sorted that one out there’s the matter of swapped parts from when these bikes were cheap a few years back and owners fitted forks, wheels, exhausts, or even complete engines from later bikes into an early-model chassis. If you want the bike simply to ride and enjoy that won’t matter, but if you are paying collectors prices, then you’ll need some provenance that what you’re getting is what you’re expecting. At its heart a Ducati 851 is a simple motorcycle (and many of the electronic components, especially in the fuel injection share part numbers with Italian cars of the era

Prices are on the up for all 80s and 90s Ducatis right now. If you’d bought this 851 new in 1990, you’d have waited 28 years to see it still worth less than the original cost. No one understands why an RC30 of the same age is worth four times as much in the same way that an RC45 is worth four or fives times as much as a mint Ducati 916. Asking prices of 851s are going up – they’ve doubled in the last five years – but that doesn’t mean selling prices have doubled too. There’s a relatively limited supply of good bikes, but an equally limited demand right now too.

But the same could have been said for the 750F1 that preceded it or the 600cc Pantahs from the mid-1980s and they all go for crazy money now. It could just be that this is the perfect time to make a silly offer on an 851, just before they rocket in value.

You heard it here first. 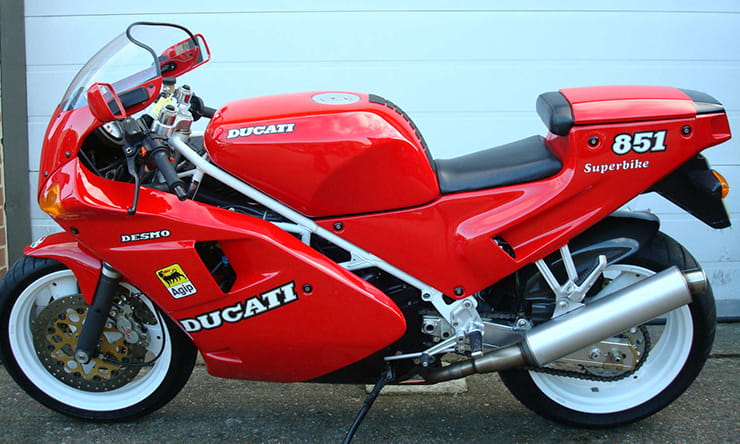 The bikes in our photos were on sale (when we wrote this) at: