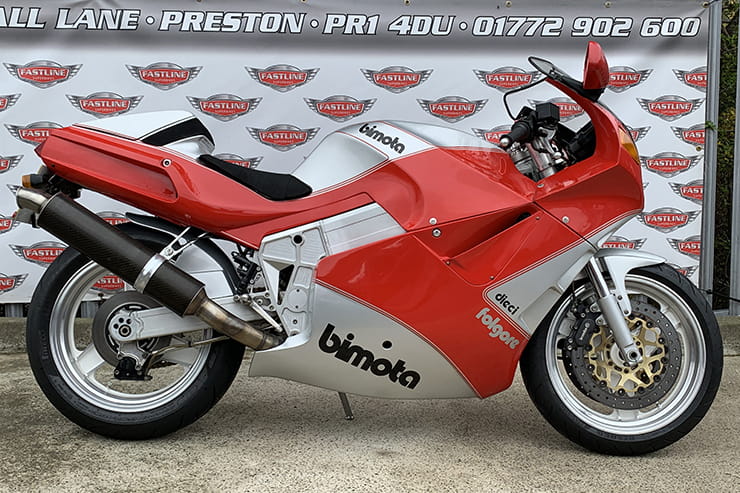 Repeat after me. I do not want to buy a Bimota…I do not want to buy a Bimota…etc. Some classics are bought because they are (or at least were) the quickest, sharpest, most comfortable or coolest. Others are bought because we always wanted one or they were our first bike etc. And then some, like this one, are just etched into our biking consciousness because at the time they came out, they represented everything we knew about stupidly expensive, droolingly-desirable motorcycles.

By the time Bimota launched this Yamaha FZR1000R-powered YB10 (the Y stands for Yamaha, B for Bimota and 10 is because this was the tenth Yamaha-powered machine Bimota built), the Japanese had caught up with the Italian company’s chassis design and innovation. The YB10’s alloy beam frame, upside-down forks and fat radial tyres were all available elsewhere and, while Honda’s FireBlade might not have matched the Bimota’s claimed 145bhp, it was even lighter than the YB10’s already featherweight mass (30kg less than the FZR1000R that donated the engine) and had already comprehensively re-written the rules of sporty motorcycling in a way we should have expected Bimota to. Honda built a rocketship that was also (relatively) comfortable, totally reliable, but also faster, shorter, lighter and sharper than anything else would be for at least two years. Funnily enough, the bike that knocked the Blade off its perch was Ducati’s 916, designed by Massimo Tamburini, who was also the ‘Ta’ in Bimota (Bimota’s name came from the first two letters of the three founders; Valerio Bianchi, Giuseppe Morri and Massimo Tamburini). 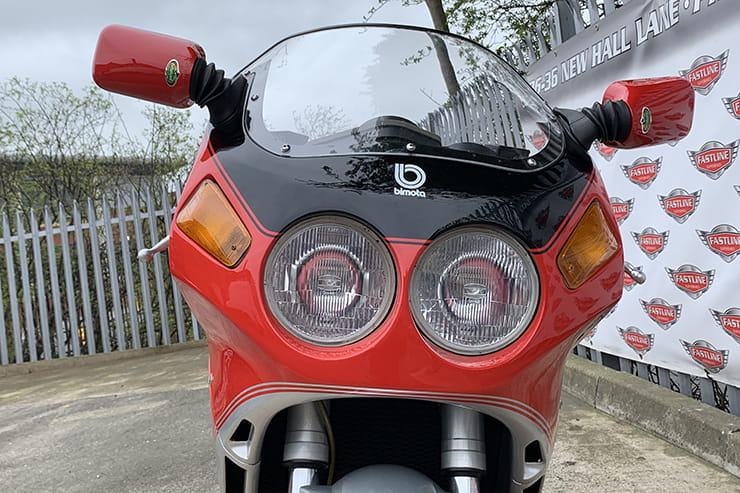 Mirrors and indicators don’t match the quality of the metalwork

In some ways the YB10 represents the last stand of 1980s superbikes. The fastest, sharpest and most focussed of a generation where power mattered more than weight, speed mattered more than agility and things like chassis design, geometry, weight distribution were still being developed. If only it had been released in the mid-80s, things might have been different.

The YB10 was based on the YB8 (also FZR1000R-powered), which evolved from the FZ750-powered YB4, which was the last Bimota that really shook up motorcycling. The YB4 had a huge alloy beam frame and fuel-injection long before anyone else and came within a whisker of winning the very first World Superbike championship in 1988. Bimota built the required number of YB4s to qualify for the series, but it was the YB6, YB8 and YB10 road bikes (using the FZR1000, and EXUP-equipped FZR1000R engines) that were built to deliver the sales. 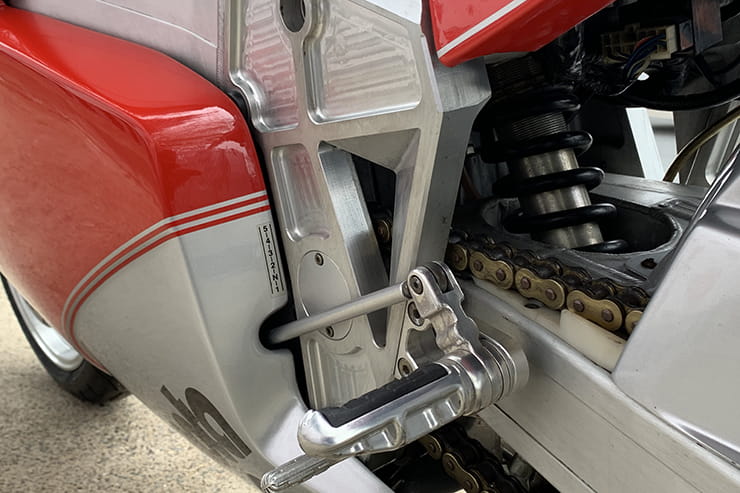 Welding and finish on the frame was always exquisite as was the fit of the bodywork (when new, at least)

Sadly, the standard Yamaha equivalents were almost as fast, almost as sharp in the corners, almost as beautiful to look at and cost half the price. The Bimotas did look stunning and the chassis was constructed to a standard that no mass-produced machine could match at the time. But they no longer looked as far-out and futuristic as Bimotas once had - the Suzuki GS750-powered SB2 in 1977 was the motorcycling equivalent of Stanley Matthews turning up at the cup final in a spacesuit…on a hoverboard…playing a synthesiser. Plus, Honda and Yamaha had already built their own limited-edition racebikes for the road, that cost around £7k in 1992, making it even harder to justify the Bimota’s £16,995 price tag for something not that much faster.

For a few years in the 1970s and 80s owning a Bimota was the ultimate in sporty motorcycling. This small Italian company carried on a long tradition of bespoke manufacturers such as Brough, Dresda, Rickman and Egli in slotting engines from other bikes into their one-off, high-spec chassis. 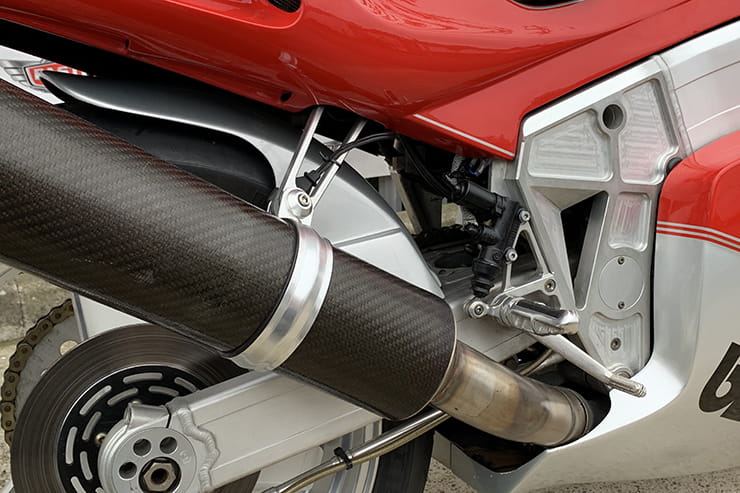 No pillion seat or footpegs. Or EXUP valve, meaning the Bimota had fuelling issues at low revs, but should be more powerful at the top end. Race can is Bimota’s own.

Bimota, like other racebike manufacturers existed to make a bike go round corners as fast as possible. Where mainstream manufacturers had to consider comfort, pillion provision and cost-per-unit versus the competition, all Bimota had to do was win races. So they built complex handbuilt chassis that could be easily modified in search of improvement because they didn’t need to tool up to make 10,000, just the handful. And their bikes could be radical, focussed and not especially civilised. So Bimotas were the first bikes to have properly reinforced bracing around the headstock and swing-arm pivot. First to use a single shock rear suspension, first to use fully-enclosed aerodynamic bodywork and radical race-inspired riding positions too. What Bimota also did that their competitors didn’t was to finish their bikes like a Rolls Royce too. They were as stunning to look at as they were to ride. 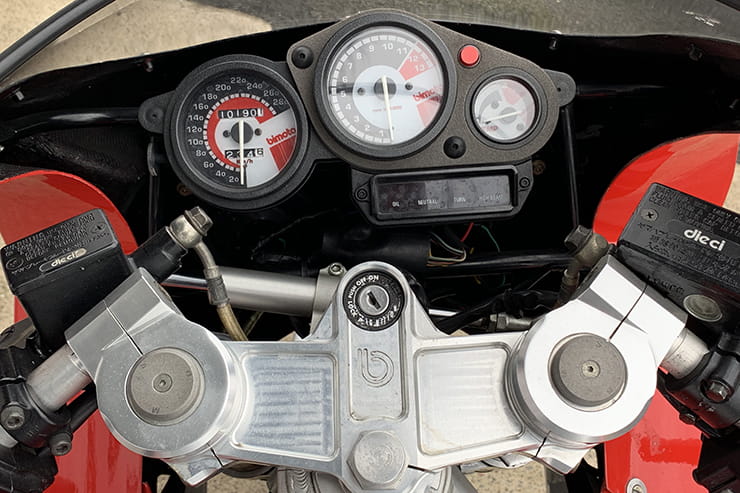 From 1988-98 Bimota also pretty-much got the commercials right too. The Yamaha-powered machines sold well enough and their mid-1990s Suzuki GSX-R1100-powered SB6 (the best-selling Bimota of all) was so beautiful to look at that no one cared it was slower than a FireBlade, almost impossible to service (the full fairing came off in one piece) and had a suspension set-up so far off the mark that most 750s would beat it down a twisty road.

People bought Bimotas because they were Bimotas. That was all that mattered. And Bimota continued to innovate. The Ducati-powered Tesi was a freakish, hub-steered device that could have been brilliant if more of us had learned to ride on hub-steered CB100Ns and RD125s. Unfortunately, when you grew up with telescopic forks, a hub-steered set-up just feels odd. And for the racers on whom the Tesi’s reputation would depend, they couldn’t find the feel they needed to get that last tenth of a second out of it. 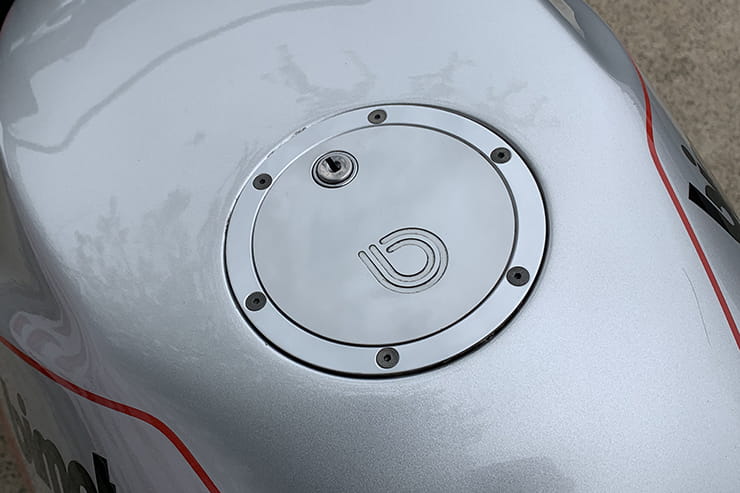 And the key from your old school locker opens the tank

If you’re going to buy one now, then this one, or any of the other Yamaha FZ750/FZR1000-powered machines strike the best balance between performance, desirability and price. The riding experience is still very special even if other bikes are measurably better. Imagine something like a Harris or Spondon special built by passionate engineers who knew their stuff and you’re about there. Harsh, not plush, hard work to ride too and fuelling that will almost certainly benefit from a dyno session. The YB10 supposedly came with its engine derestricted to give the full 130bhp. UK superbikes had a voluntary 125bhp restriction in the early 1990s, which actually left around 110bhp at the back wheel, but, on the FZR motor was laughably easy to remove. If your YB10 feels a bit sluggish, have a look between the carbs and the inlet manifold. If there are half-moon shaped rubbers in the hole, find yourself a Stanley knife and get trimming. It seems that some of the UK-spec YB10s also had UK-spec Yamaha engines. 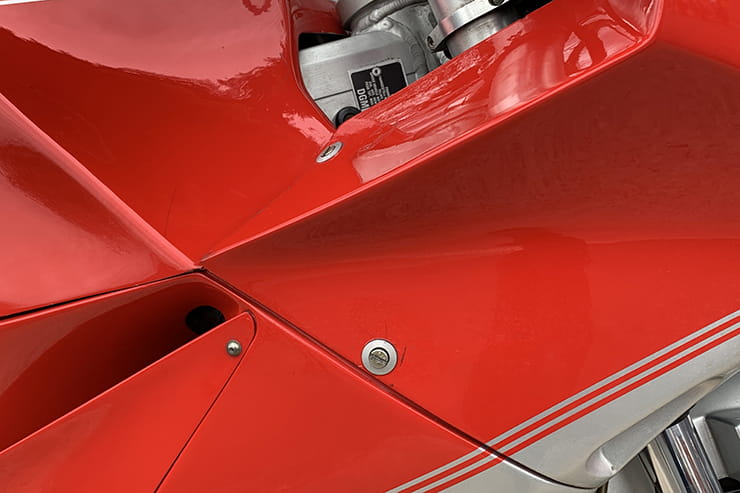 Check things like the condition of the bodywork carefully because replacements are almost impossible to find. Check also that the bushes and bearings in the suspension are in good nick and look very carefully for signs of crash damage. Bimotas didn’t suffer the streetfighter craze that affected so many lovely Harris and Spondon chassis, but they went through a phase of being cheap enough to be track hacks, owned by riders who didn’t understand what it took to keep one sweet.

Buying from a dealer helps because you can get a service and check-over as part of the deal, meaning they get the hassle of refitting the bodywork and replacing the broken fasteners.

One day your Bimota will be worth serious money because the bikes were genuinely that good, when set-up properly. I’ve been lucky enough to ride four in my road testing career and only one of them was spot-on. Understand that and you’ll love it.

Bike in photos is on sale at Fastline in Preston £6999 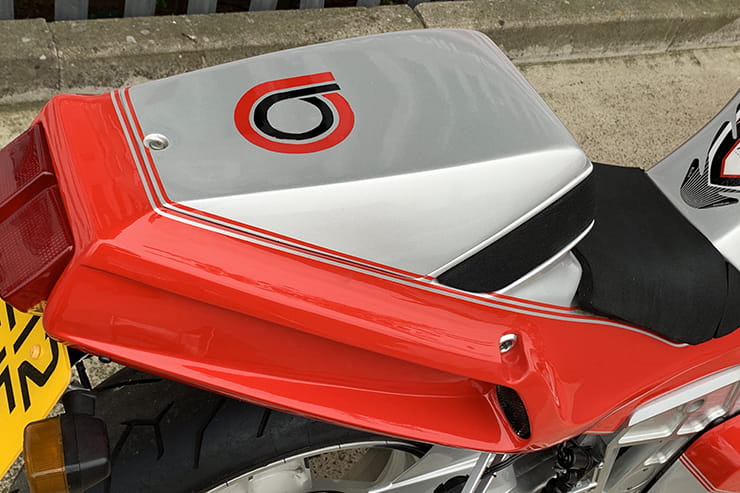