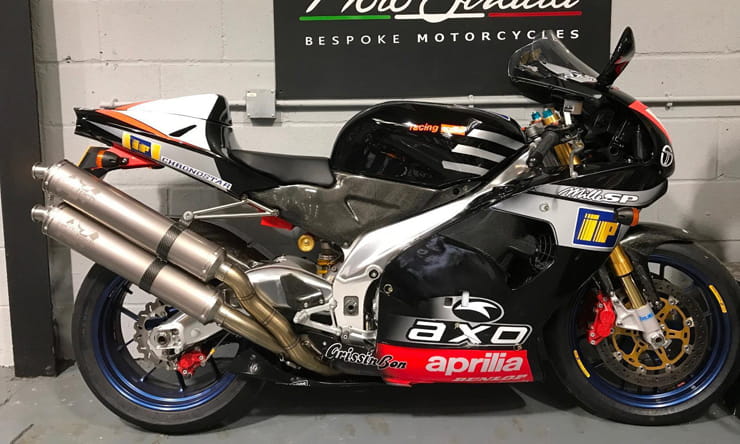 When World Superbike was king it brought a handful of super-trick, almost-race-ready sports bikes into dealers and potentially into the garages and sheds of anyone dedicated enough to live on potatoes alone for as long as it took to pay it off.

Honda’s RC30 and Yamaha’s FZR750R OW01 were the headline acts along with Ducati’s ever-better SP and SPS ranges. Each was made in big enough numbers that if you picked your moment in time (around 1999) most of us could find a decent example and afford to own one for a summer. Kawasaki’s beautiful ZXR750K and Suzuki GSX-R750RR are harder to track down, but the real prize for collectors is this Aprilia.

Just 150 Aprilia RSV1000SPs were built worldwide in early 2000. Launched just 18 months after the first RSVs, the SP might have shared a silhouette with the stocker, but it was almost an entirely different bike. 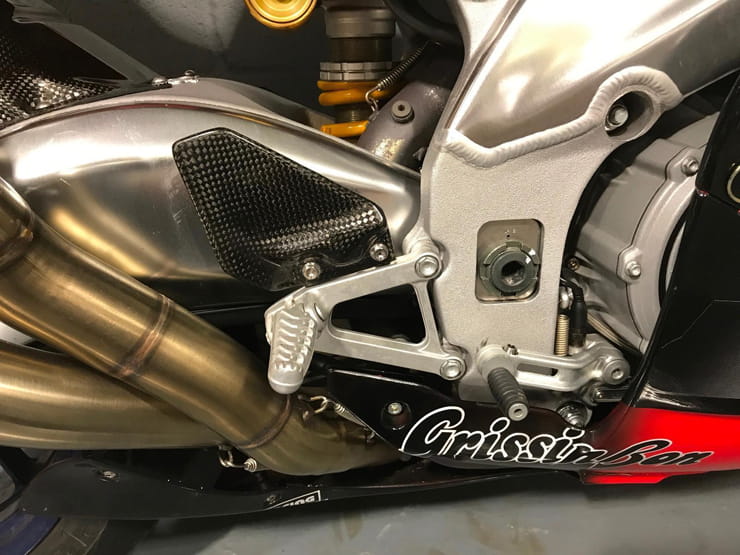 The frame was 20 per cent stiffer, but weighed no more than standard (mostly because it had a single-seat and therefore much smaller subframe) and was adjustable swing-arm position, steering head angle and even engine position within the frame. This was something that only factory bikes had back then and was a reflection of how much development Aprilia still expected in the first racing season.

The fuel-injected v-twin engine retained the 60-degree  cylinder angle, but pretty much everything else was bespoke and built by Cosworth with a bigger bore and shorter stroke for faster-revving and more potential power with tuning. Claimed power was 145bhp – almost 20bhp up on the standard bike and the SP came with two exhausts; a road legal set and a twin-pipe race set-up.

Suspension was top-spec Ohlins at both ends and lightweight forged OZ wheels plus full carbon bodywork knocked 5kg off the stock bike’s dry weight. At a fiver under £23k, the SP cost almost twice the price of the RSV1000R which also had the fancy Ohlins suspension and OZ wheels, but not the racey frame, carbon bodywork or Cosworth motor.

On the track the RSV took everyone by surprise when former WSB champ Troy Corser won a race at the incident-packed second round in Australia. After Anthony Gobert had won the first race in the wet from Carl Fogarty, Corser took the second one after Foggy crashed (the crash that finished his career) and the fastest lap on the RSV. Corser finished 2000 in third place in the RSV’s first season. That’s impressive because WSB was a lot more competitive back then, even without Foggy. 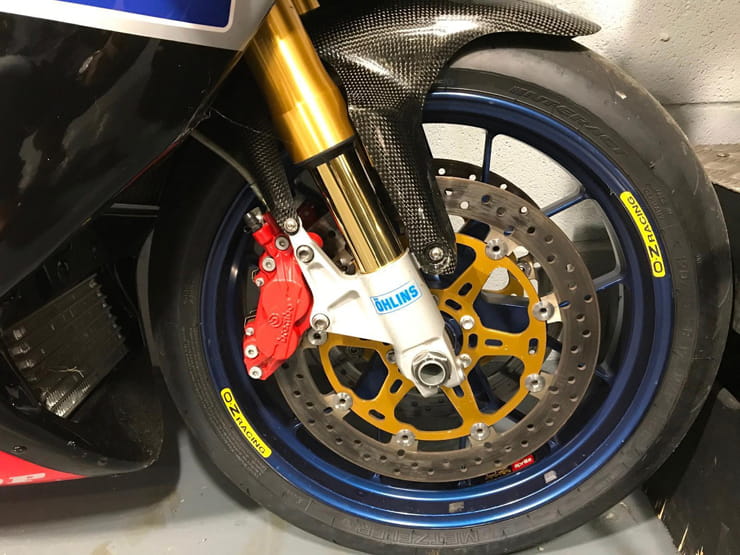 This RSV1000SP – number 120 out of 150 is on sale at Moto Strada in Shipley between Bradford and Leeds. It’s had two owners and has just under 4000 miles on its clumsy-looking digital clocks. Both sets of exhausts are included as well as an additional set of wheels. The bike also wears a private plate T11ESP, which, with a suitable black screw inbetween the 1s could read THE SP if that floats your boat.

Back in 2000 I was one of a few UK journos lucky enough to ride an RSV-SP on the road. It was stunning at the time, feeling so much more powerful than the other big twins, but surprisingly flexible as a road bike too. Aprilia’s decision to build a dry-sump 60-degree twin meant they could also run a shorter wheelbase than Ducati and still keep the engine low in the frame, so it handled with confidence and a lot more in reserve than I could test.

Knowing that it also had all that adjustability was frustrating because I barely knew where to start on the suspension, never mind the frame and swing-arm. So I didn’t. Ironically the only thing I wanted to alter  footrests – the position meant I kept melting my boots onto the exhaust – was one of the few things not adjustable on the bike. 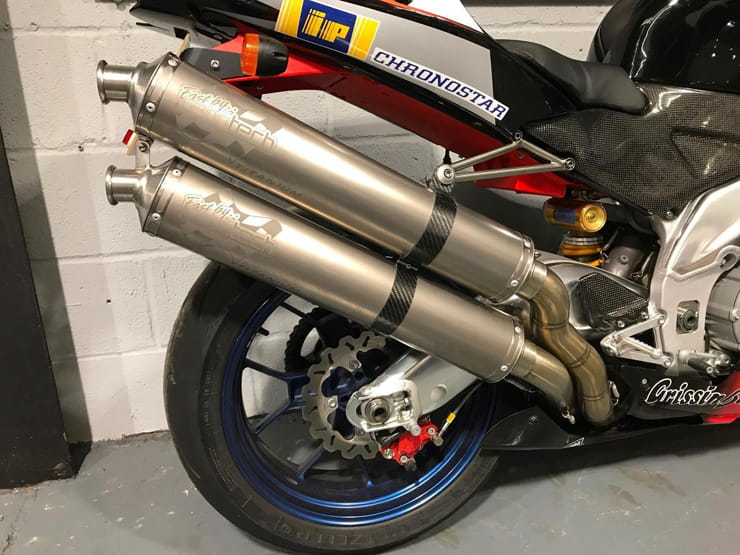 Seventeen years later the carbon-clad RSV-SP still looks terrific and purposeful in a ‘proper race bike’ type way. It’ll still be more than quick enough and, with all that chassis adjustment and a similar dry weight to a modern superbike, it’ll be nimble enough too.

Pricing something like this is hard. It doesn’t have the universal appeal of an RC30 or Ducati 851, but for any collectors looking to complete their set, a bike like this doesn’t come up for sale too often.

£13,495 is half the price of a decent RC30 (if any still exist – but that’s a different story) and cheaper than an OW01, and this is a better bike by any measurable feature.

And it’s definitely an investment Prices of WSB bikes are going up…fast as the generation of us who watched them get older and have less demands on our cash. Moto Strada are at www.motostrada.co.uk 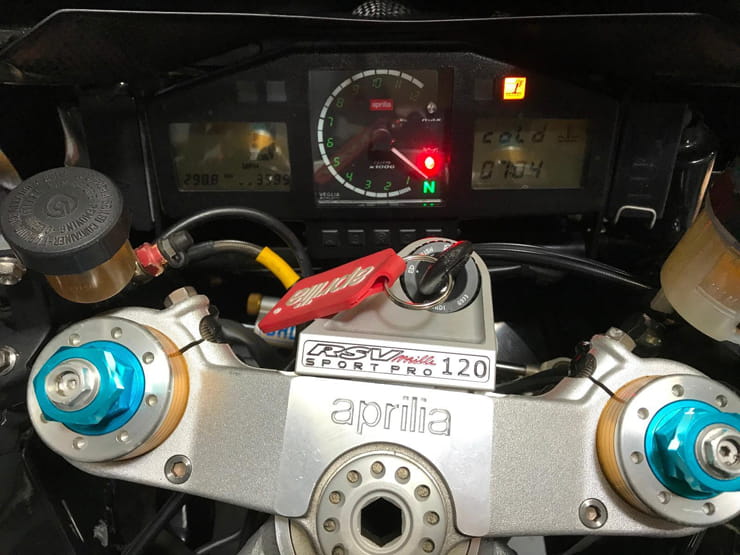