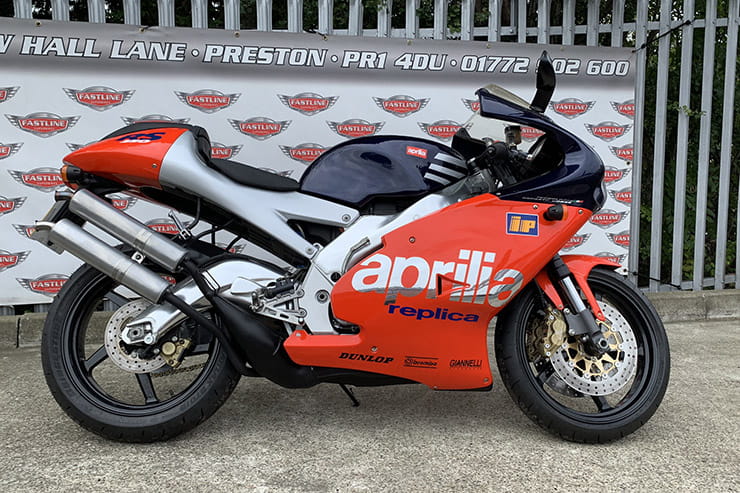 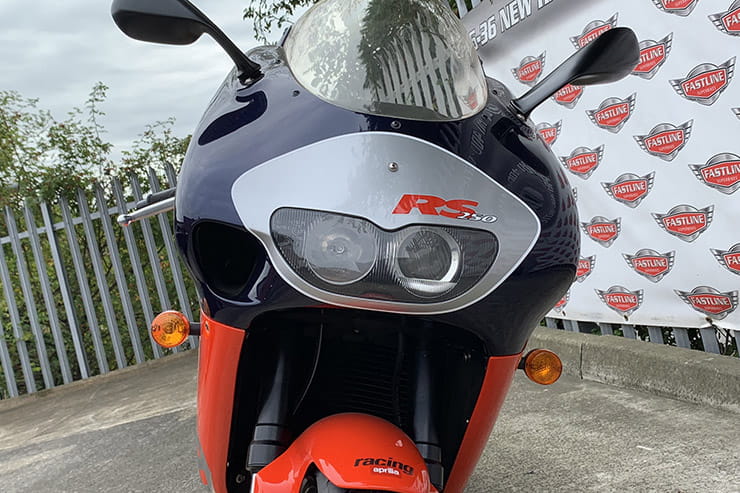 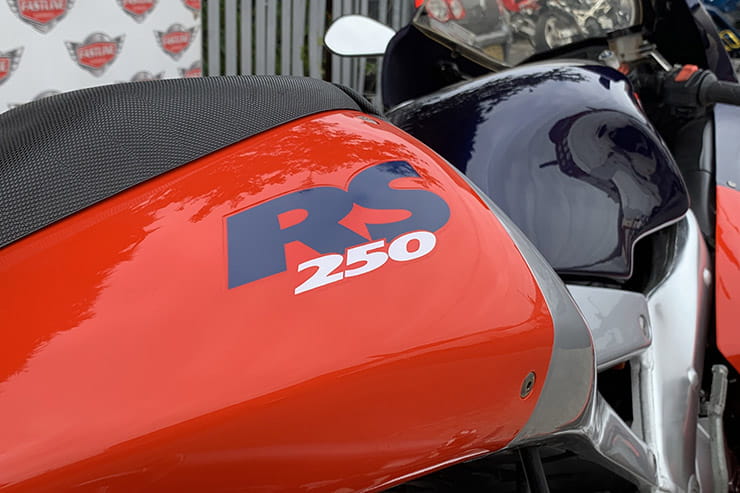 For a company with an impressive racing pedigree, Aprilia were late to the 250cc road bike market. Their beautiful RS250 race bike appeared in GPs in 1991 and won its first world title with Max Biaggi at the end of 1994. With almost perfect timing, Aprilia had announced their roadgoing RS250 before Mr B had washed the champagne out of his goatee.

Aprilia did a deal with Suzuki to buy RGV250 engines (3500 in the first year), which they modified and fitted into a chassis designed to be as beautiful as it was functional. To this package they added high-spec adjustable suspension, even higher-spec Brembo brakes and bodywork that looked as close to the racer as they could. Because it was European it also came on properly sticky Pirelli tyres (at a time when the Japanese were still fitting awful OE rubber to everything). It even had a lap timer built into the clocks.

When launched in 1995, the RS250 cost £5495. Suzuki’s RGV250 (the only other officially-imported UK 250 race replica in 1995) cost £5395. You could argue that the Aprilia’s drop-dead styling, plus its superior suspension and brakes and claimed extra horsepower made it a no-brainer. But the reality was that by 1995 Suzuki were running-out RGVs at big discounts (typically £4500 or less if you got lucky) and for many, the peace of mind of Suzuki’s two-year warranty mattered more than the Aprilia’s desirability with only a 12 month warranty.

Fast forward to 2019 and you’ll pay somewhere north of £6500 for an RS250 you can trust and more likely around £7500 for a really good one. That’s around £1500 more than an equivalent RGV250. You’ll pay similar amounts to the Aprilia for one of the late-model Honda NSR250s or Yamaha TZR250Rs, but, of course, they are mostly still restricted to 45bhp, where the Aprilia will make around 10bhp more. 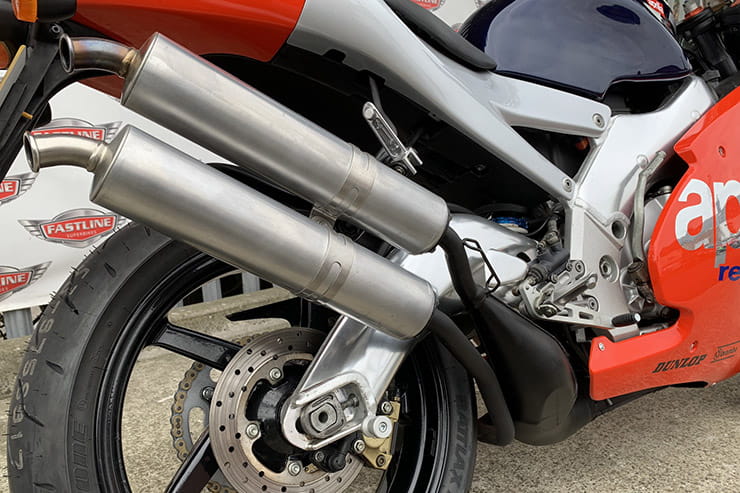 Aprilia used the Suzuki engine pretty much as it was in the RGV. They skimmed the head for raised compression, remapped the digital ignition (still a new thing in 1995) for improved midrange, added an extra solenoid to the two that controlled air/fuel mix in the carbs and used their own exhaust pipes (which Aprilia claimed were responsible for around 90 per cent of the bike’s power improvements). The result was a claimed 70bhp, which turned out to be more like 53bhp (exactly the same as an RGV250) at the back wheel. 27 lb-ft of torque was the same as the RGV too. Look beyond the peak power figures though and you see the extent of the work Aprilia had done. The RS250 has around ten per cent more power and torque than the standard RGV between 8000-11,000rpm.

By the time Aprilia got hold of the V-twin, RGV motor it’d had six years of development, one major upgrade and a ten per cent power increase on the original 1988 version. More importantly, Suzuki changed the design of the powervalves in 1991 to make them much more reliable and continued to work on power delivery and reliability in the meantime.

The gearbox was always a bit stiff (for a Suzuki) but dependable and consistent in action and you soon got used to it.

As with all two-strokes the biggest worries buying now are caused by standing and lack of regular use. There’s plenty of good advice around and some excellent two-stroke rebuilder/tuners still out there. Don’t expect it to be cheap to fix things though – expertise is expensive and, for such a simple motor there’s lots to go wrong. Any plastic or rubber part that comes into contact with fuel will have been degraded by ethanol. Most of the rubber/plastic internal seals will be past their best. Carbs can suffer very badly if left with stale fuel inside and fixing the above needs someone who knows and loves two-stroke engines to put it all right.

If you’re reading this bit you bought the wrong bike. Fuel consumption averages around 30mpg, but can be as low as 25mpg when used hard. And then there’s the oil. How does a litre every 250 miles sound at between £12-20 per litre? Running a 1000cc superbike is cheaper.

Alloy beam frames were old news by 1995, but Aprilia’s sculpted, polished unit looked like something straight out of the race department – the absolute opposite to the functional-looking units on its Japanese rivals. An equally beautiful curved swing-arm allowed both exhausts to exit on the right hand side, while the droopy racebike replica bodywork and dinky footrests and controls all added to the minimalist racer look.

Strangely then, the Aprilia was the heaviest of the 250 race replicas. At 141kg dry it was 15kg bigger-boned than Yamaha’s TZR250R, 10kg heavier than a Kawasaki KR-1S and 2kg more than Suzuki’s RGV250.

Thankfully, Aprilia used this extra mass well. In addition to some sophisticated suspension, the RS250’s mass made it less prone to tank-slapping on bumpy roads and a touch more stable at high speeds when changing direction. 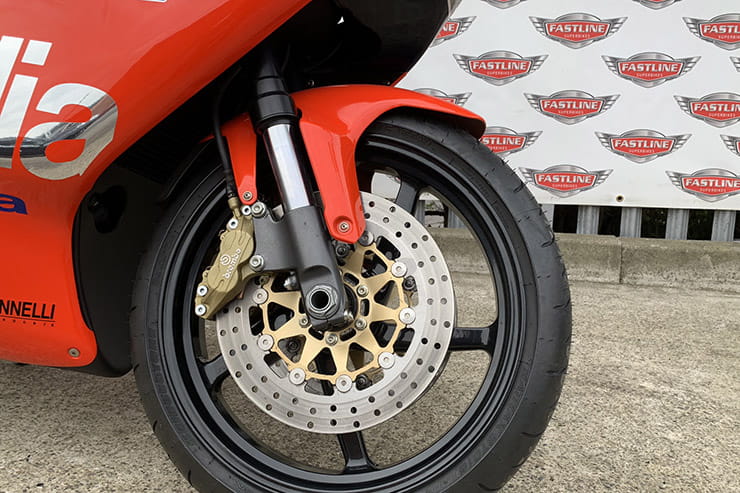 The four-piston Brembo front calipers offer enormous stopping power and the suspension allows you to use pretty much all of it. Getting back on a two-stroke after a few months away is an interesting reminder of how much engine braking a modern four-stroke motor has. Thankfully the Aprilia’s brakes are strong enough to cope.

Compared to the other 250s the RS is comfortable. Again, it’s down to the suspension and the extra midrange power allowing a slightly more relaxed ride when your head’s up.

Compared to pretty much anything else this side of a race paddock it’s about as uncomfortable and impractical (and uneconomical) as it gets. But you knew that already. 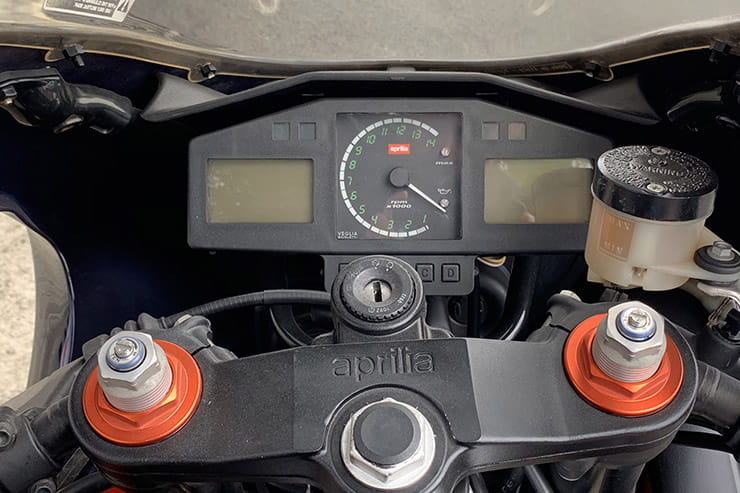 Earlier version had prettier clocks. This later one mimics the RSV1000

BikeSocial’s frazzled memories think that the RS250 was the first bike to ever have a lap timer fitted. The early bike’s mostly-analogue clocks had a small LCD display in the middle which showed temperature, mileage, battery condition and lap time. The later (1998-on) bikes like the one in our photos had the ‘futuristic-at-the-time’ LCD dash shared with Aprilia’s RSV1000, which looks very dated now.

The last generation of water-cooled two strokes can be very reliable. Allow them to warm up properly, use good oil and ride them regularly and you’ll be surprised how many miles they will do between rebuilds. The RS’s clocks read ‘cold’ until the motor is up to temperature, which is a helpful reminder to take things easy at first. And the later RGV motors have powervalves that no longer dropped randomly into the engine. The biggest issues as with most classics is lack of use. Carbs gum-up with stale petrol, the ethanol in modern fuels rots the fuel lines and the water that comes out of the same modern fuel rots petrol tanks from the inside.

On two-strokes the crankcase oil seals (that separate the combustion chamber from the gearbox) rot, water pump seals perish and so-on.

Not quite as many Aprilias were raced as their Suzuki and Kawasaki equivalents. By the time the RS arrived the 400 Supersport class was filling up with 400cc four-strokes, but that doesn’t mean you shouldn’t check. Post 1998 bikes are even less likely to have been raced, but just as likely to have been track day bikes. The differences are marginal, but the first generation have better paint schemes and are slightly more desirable. 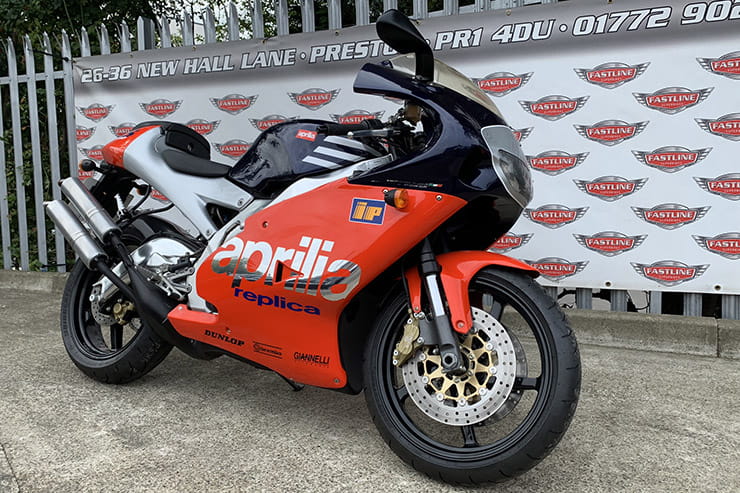 How many other investments make this much smoke?

To some people Aprilia’s RS250 is the most desirable of the two-stroke 250 race replicas. Honda’s final generation NSR250 might have been even more exotic and exquisitely put together, but they are restricted to 45bhp and 112mph as standard and derestriction is complex and expensive. The Aprilia makes more horsepower as standard, a lot more midrange too and handles every bit as well as any of the others despite weighing considerably more.

The tricky bit is tracking down a good one. Fewer were sold and those people who have a good one are holding onto it. Buy the best and most complete one you can find because spares can be tricky to get hold of. Aprilia used to have serious issues with spares supply. For later bikes (especially the 1000cc models) it’s been sorted for a long while, but some of the earlier machines can still be very tricky.

Three things we love about the Aprilia RS250…

Three things to watch out for…

• Hard to find a good one

• Bikes that have been stood for a while