The American sunshine state of Florida, reknown as much for its arrow-straight Freeways and Everglade-flat terrain as it is for its beaches and theme parks, isn’t the obvious choice of location for the test of a new tyre. But then the hoop concerned, Bridgestone’s H50 Battlecruise, isn’t the most obvious choice of tyre, either.

All-new for 2017, the H50 is the tyre giant’s first purpose-built CRUISER fitment in recent memory and as such it represents a concerted attempt by the Japanese concern to cement its position as the world’s biggest tyre and rubber products manufacturer.

And on the evidence of our first ride with the new loops, aboard a cross section of entry-level American V-twin cruisers ranging from the Indian Scout and Scout Sixty to Harley-Davidson’s enduring Sportster 883 and even a handful of H-D ‘Big Twins’ such as the Softail Slim and Heritage Softail, it’s clear they’ve done enough to seriously shake-up the class. Whether it will or not, however, remains to be seen – of which more later.

The H50, or Battlecruise as I prefer, is being launched in two phases. The first, tested here, and which goes on sale in the UK in January next year, has a cross-ply construction and comes in four front and four rear fitments aimed at the lighter type of V-twin American cruiser mentioned earlier. The second phase, due in a year’s time, will be either cross-ply or radial and will come in 14 larger sizes (right up to a 240-section rear) designed for heavier tourers including the best-selling Harley-Davidson Street Glide

That ‘cross-ply’ element is important. A few years ago Bridgestone made the corporate decision to move to solely radial motorcycle tyres, which was all well and good as far as its popular sports and sports-tourer offerings were concerned until it was realized that the move precluded most of the vast US market from its wares. In the US, after all, not only are cruisers, and particular American-produced V-twin cruisers, the market leaders (so much so that in its first year, Harley’s updated ‘bagger’, the Street Glide, was not only the best-selling bike in the US – it outsold all imported machines put together), the market for cross-ply enduro and motocross knobblies is vast, too. In short, cruiser and ‘crosser tyres make up 70% of the American motorcycle tyre market and Bridgestone wanted a share. Hence the reintroduction of Bridgestone knobblies into the US market last year. While the Japanese firm have now followed that up with the staged launch of the H50.

And Bridgestone being Bridgestone, a firm, after all, which places great pride in its technical nous and performance ability, this is a cruiser tyre like no other.

Specifically, Bridgestone set out to produce the best-performing cruiser tyre yet. 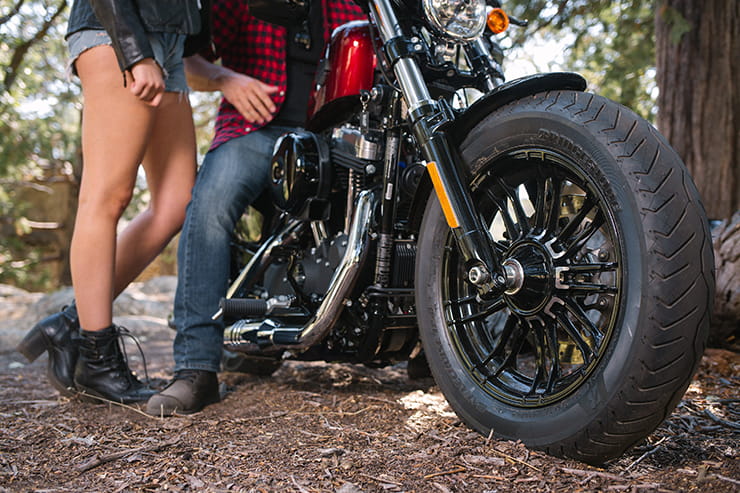 “We’ve extended our influence into one of the most important motorcycle segments in America, and we’re excited to bring our deep industry expertise and Bridgestone-brand motorcycle tyres to this group,” said Kevin Hunley, senior manager of Bridgestone America. “Riders of today’s cruisers look for a tyre that can provide exceptional grip and longer treadwear while enhancing their riding experience. We’ve accomplished that with the Battlecruise H50 motorcycle tire as it brings ultimate performance, ride comfort and traction in all conditions.”

To achieve just that, Bridgestone’s engineers adopted a three-pronged approach with the new Battlecruise.

Second, a new tread design which is actually derived from the old Bridgestone Exedra Max cruising tyre, is combined with a secondary, more subtle shoulder tread pattern to maximize grip in both wet and dry conditions.

And thirdly, a specifically-developed new compound and flatter profile combine, Bridgestone claim, to give hugely enhanced tyre life – so much so that the Japanese company is claiming a life expectancy for its new H50s of almost DOUBLE that of some of its leading rivals.

On the downside for some, however, is the fact that all this high tech, fancy compounds and the like also means that there isn’t going to be a white wall option of the new H50 available, as might be preferred on more heritage cruisers like Harley’s Heritage Softail. Bridgestone’s engineers told me on the launch in Florida that incorporating white walls would have significantly compromised the H50’s performance and a commercial decision was made not to include them (although they didn’t entirely rule them out for the future). 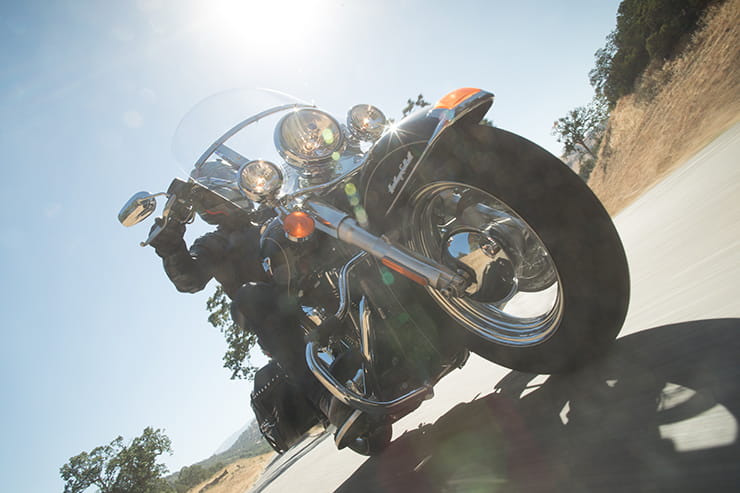 But enough of the theory – how do Bridgestone’s newcomers measure up?

Our half-day test route took us out on the dual carriageway ‘freeways’ south-west of Orlando, past the famous Disneyworld Resort into the flat, lake-dotted expanses of central Florida. Here the terrain is as flat and dry as the roads are straight and undemanding – so not your usual type of roads on which to test tyres. That said, there was enough variation eventually, particularly through a brief section of rolling switchbacks, to get a flavour of what Bridgestone’s new tyres were capable of.

As Bridgestone’s newcomers have been designed specifically for American V-twins we’d been given a selection of Indians and Harleys on which to sample the new tyres. Although, being the first ‘wave’ of fitments, these were predominantly the smaller, lighter models from the two American firm’s line-ups. These ranged from Indian’s popular Scout and Scout 60 to Harley’s 883 Sportster up to the lightest of its ‘Big Twins’, machines like the Softail Slim, although a Heritage Softail was also available.

Being a larger chap and wanting to sample Bridgestone’s new tyre on a machine resembling the best sellers in the category, I chose the Softail Slim first – effectively a narrow rear-tyred version of the popular, retro-styled Fat Boy. And despite the undramatic nature of the roads I was immediately impressed. Admittedly, in the space of an afternoon’s ride, we were never likely to find out much about the new Bridgestone’s claimed improved durability. But what was conspicuous immediately was its light and precise steering, something you’d never normally associate with a long, low and heavy cruiser.

Better still, once we finally hit a section of sweeping S-bends deep in the mid-Florida Everglades, the newcomers’ impressive grip – well, at least for a cruiser tyre – became apparent as well. The Harley could easily and happily be thrown right on its side, or at least until its footboards touched down, creating a shower or sparks all the way round the turn for as long as you liked. Now, I know this isn’t the usual barometer of a motorcycle tyre’s grip and it’s also true that, with a little bit of bravado, most footboard-equipped Hogs can be persuaded into such antics pretty much whatever tyres they’re wearing (normal H-D OE tyres, by the way, are fairly uninspiring Harley-Davidson-branded Dunlops), but it was startlingly easy on the new Bridgestones – and great fun too!

The same was just as true when I switched to one of the Indian Scouts. Compared to the big Softail, the Scout’s a genuine roadster that bears comparison, in terms of its dynamics and all-round prowess, to not just cruisers but even bikes as sporty as Ducati’s Monster or BMW’s R1200R.

It’s also worth mentioning here that the Scout’s OE tyre is currently a fairly cheap and uninspiring Kendra and is one of the few areas of criticism on the stock machine. So the revelation that the Scout was positively transformed by the new Bridgestones probably shouldn’t come as much of a surprise. While stability and comfort was barely changed, when manouvring in confined spaces such as a car park it was noticeably more nimble and easier to manage while at speed through the few turns we could find it was at once quick to steer, light on its wheels and lively but at the same time completely reassuring grip-wise. Simply, the new H50s made an already good bike into a far better one.

The first wave of H50s will become available in January early next year in the sizes and RRPs listed below, although actual dealer prices are likely to be significantly less (as in brackets) but will require a fitting charge.

In short: Bridgestone are on to a winner – but I have reservations, too. In terms of its performance, handling, grip, lightness of steering and so on, the H50 delivers everything, as far as I could tell, it set out to – with the one proviso that I can’t yet comment on durability. As such, an especially for the Indian Scout, they make an almost ‘no-brainer’ of a replacement buy.

But as regards bigger bikes, and particularly the second wave of tyres due to fit Harley’s tourers and the like in a year’s time, I’m not so sure.  Yes, again, I’ve no doubt about the new Bridgestones’ abilities, but I also think that with this class of machine, that actually counts for less. Durability aside, few ElectraGlide riders, I’d guess, put grip and handling that high up their replacement tyre wish-list. And when the traditional choice is an American-made Dunlop, that has ‘Harley-Davidson’ writ large in white on its side walls, I wonder if a Japanese tyre that’s probably no cheaper and nor is available as a whitewall, has as much appeal as Bridgestone hope.

One scenario could have changed all that. Bridgestone also own, although this isn’t that widely known, the historic, American Firestone brand and indeed had considered using that brand for this new cruiser tyre, in the end rejecting the idea to retain Firestone for its classic line of tyres. I’m not saying that was a mistake, but I’m pretty sure the new H50 would have had even stronger appeal than it has to American V-twin buyers if it’d had ‘Firestone’ down its sidewalls instead of something beginning with B.