Book review: 'The Mechanic Who Got Lucky' by Stan Stephens 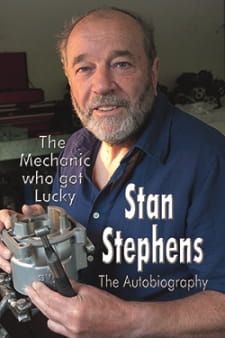 For anyone of a certain age, Stan Stephens is the guru of two-stroke gurus.

Back in the day, when young head bangers raced Yamaha RD350s as a stepping stone to Grand Prix glory, there was only one man to tune your engine, at least there was if you wanted to win. His name? Stan Stephens.

And it wasn’t just on the track where Stan was a legend. For any early-Eighties youth looking to live their life in a haze of blue, a set of Stan’s spannies were the only way to go. Some even say the fabled ‘Tuned by Stan Stephens’ sticker was worth two horsepower on its own…

Of course, times move on and the stinkwheels have been resigned to history. Stan is no longer a tuning innovator but very highly regarded as the go-to man for the now classic two-strokes, even though he more than knows his way around a four-stroke motor too. Now, in his (semi) retirement, he’s published his memoirs, The Mechanic Who Got Lucky (TMWGL).

TMWGL starts right at the beginning, documenting the tale of a bike obsessed Kent lad who was to carve out a life in motorcycles. From his early days as a speedway rider, sidecar pilot and stock car racer, the book tells of Stan’s evolving business interests and his bike-centric family life, littered with plenty tales of derring-do and forthright opinion.

Stan claims that he has “written, edited and published the book myself…” which is something of a shame, as slicker editing could really have helped bring the stories to life. It can be a heavy read at times and while Stan’s a sage with the spanners, his mastery of the apostrophe remains rather more questionable. That said, TMWGL exudes a certain charm, even if it plods along rather than grips.

Despite that, it’s an interesting read for fans of his work and those who appreciate the bar room tales of yesteryear. It’s not as revealing or inspiring as the typical racer autobiography, but it’s a book that documents a bygone era by a man who has more than a few stories to tell. I, for one, am glad that they have been told.

In keeping with the book’s home-made philosophy, it is only available directly from Stan, priced £16 plus postage and packing. To place an order, visit his website at: http://www.stanstephens.com

Have you read Stan's book? What did you think?  or