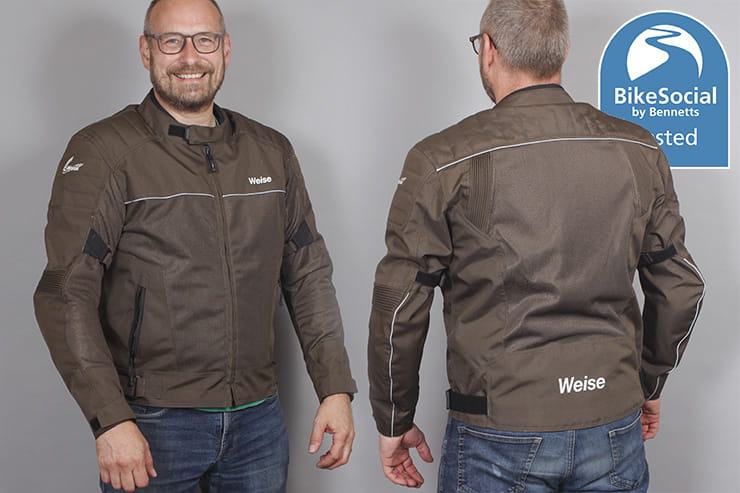 Justifying a mesh jacket that you’ll only use in the peak of summer can be hard in the UK, but the Weise Scout offers extraordinary value for money with the promise of great levels of protection.

I’ve been wearing it on a Yamaha Tracer 9 GT, BMW S1000XR and a Kawasaki ZX-6R to find out if it’s as good as we’re hoping 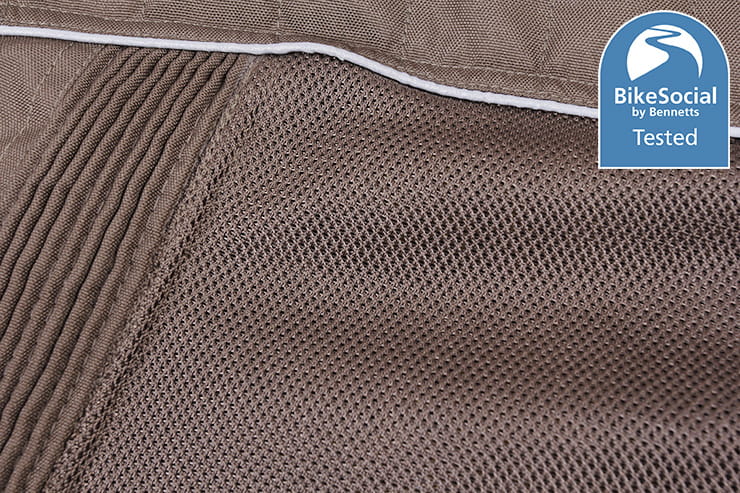 The overall feel of the Weise Scout is not that of a high-end textile jacket (costing three or four times as much), but the company has put this together in such a way that it looks great and performs brilliantly.

Despite the photos showing it looking brown, I have the Scout in Olive, which is more of a green shade but no matter how tight I got the colour temperature it wouldn’t photograph properly. You can also find it in black or stone (very light grey), and while the mesh covers a large proportion of the chest, up the insides of the arms and most of the back, it doesn’t look awkward or out of place. In fact, the quilted styling to the shoulders – combined with the colour – gives it what I think is quite a classic style.

The neck’s trimmed with neoprene, making it more comfortable, and there are expanding panels on the shoulder-blades and elbows, to give you a bit more room.

The neck can be fastened with hook-and-loop, plus you can fold this tab in on itself to give you a bit more air here. I’d have preferred this to clip out of the way on the outside, rather than the inside as I find it presses uncomfortably on my throat. To be honest though, I just fasten it as normal as there’s plenty of air getting around.

There’s reflective piping on the chest, outsides of the arms and across the back, which adds to the touches that do make this seem worth more than the asking price. 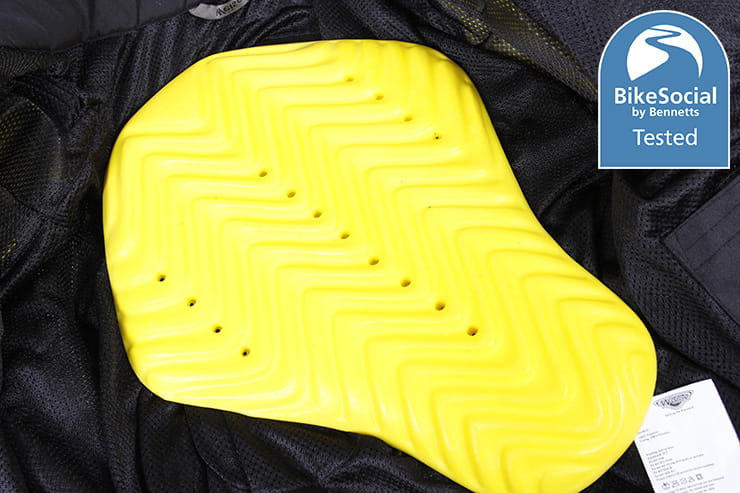 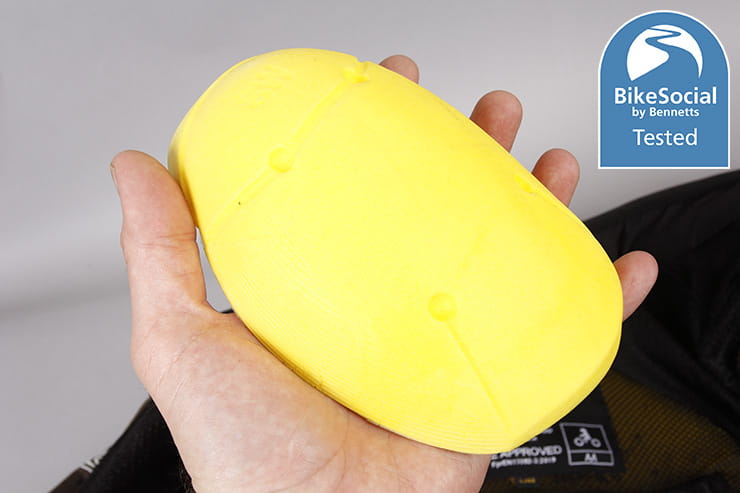 It’s fantastic to see the Scout achieving Level AA under EN-17092. It won’t give the abrasion protection of decent leather of course, but keeping cool without resorting to riding in just a tee-shirt is very important.

I’m very impressed to see Weise also including not only CE-Level 1 armour at the elbows and shoulders, but also on the back. It’s fairly cheap; D3O Ghost for instance would be more compact and allow more air through, but costs had to be saved somehow. My main criticism is that there are no ventilation holes in the shoulder and elbow armour, and while the back protector does have small holes moulded into it, there’s flashing across them that means air can’t actually get through. A couple of minutes with a sharp knife will clear these and help get air moving more, though don’t expect miracles with there being no 3D mesh. 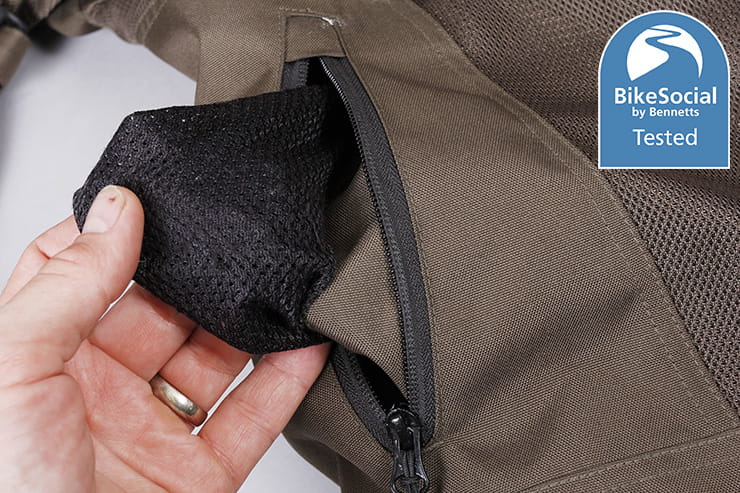 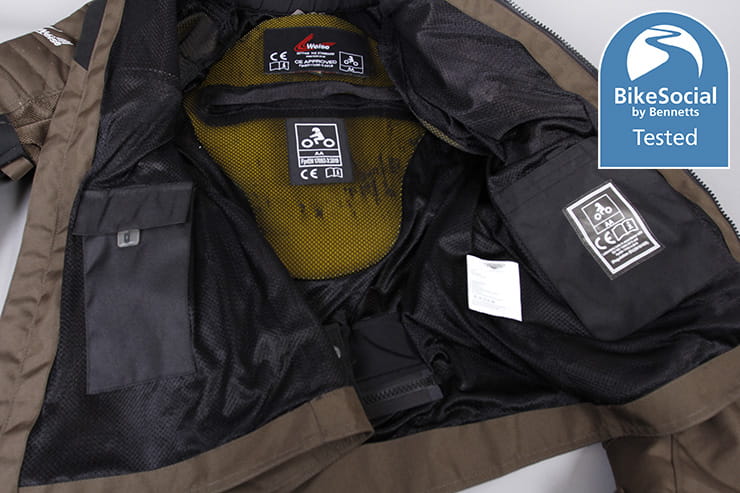 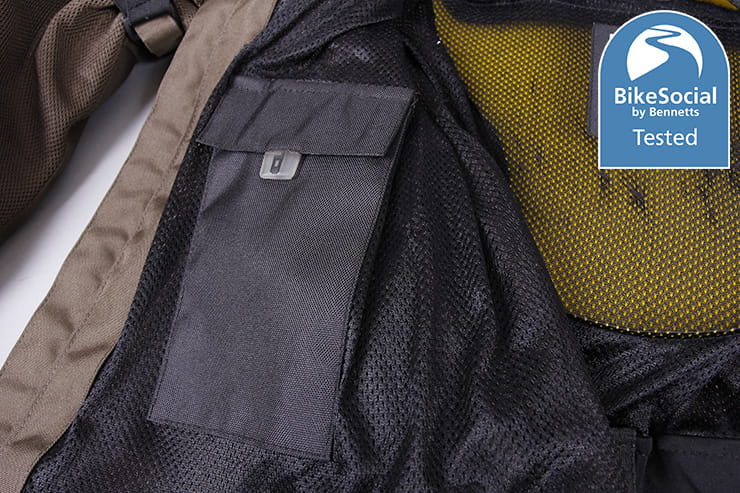 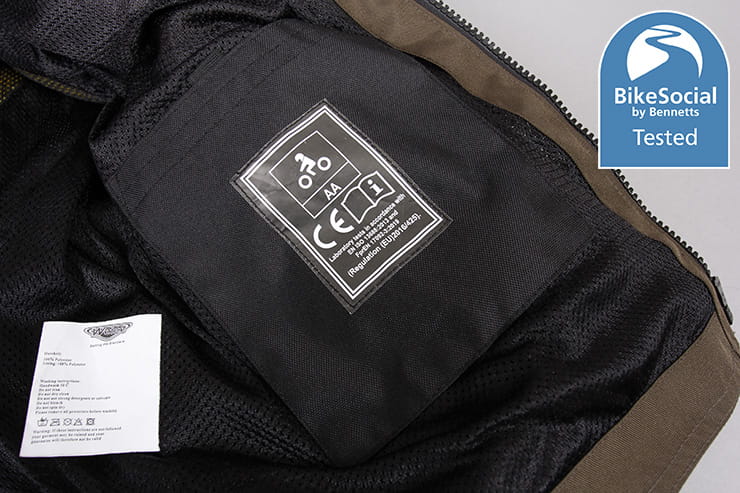 The Weise Scout has two zipped pockets on the front that are mesh inside, so they don’t restrict airflow too much. This might reduce their wear resistance, but if my keys do cause any damage I’ll update this article.

My only criticism with this whole jacket is the interior pockets – they’re dense material that restricts airflow, essentially stopping most of the lower chest area from passing anything like the air it could. This is a real shame and seems an oversight in the design, but it’s fair to say that on most bikes this part of your body won’t be as exposed to wind, so it’s not as bad a fault as it could be. 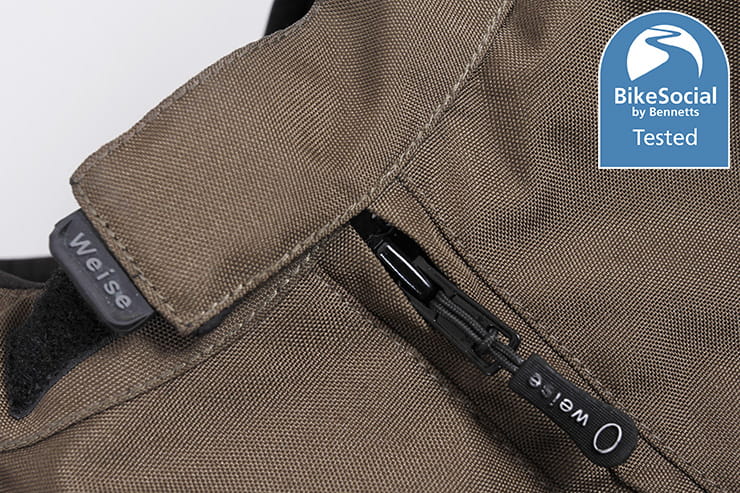 The front of the Scout is secured with an easy-to-use, chunky YKK-branded zip, while the wrists are cinched up with hook-and-look fastened straps. Nothing flashy, but it all works well.

There’s a short connecting zip internally, for fastening to Weise gear, and the mating side is supplied, so could be sewn to your own riding jeans, for instance. 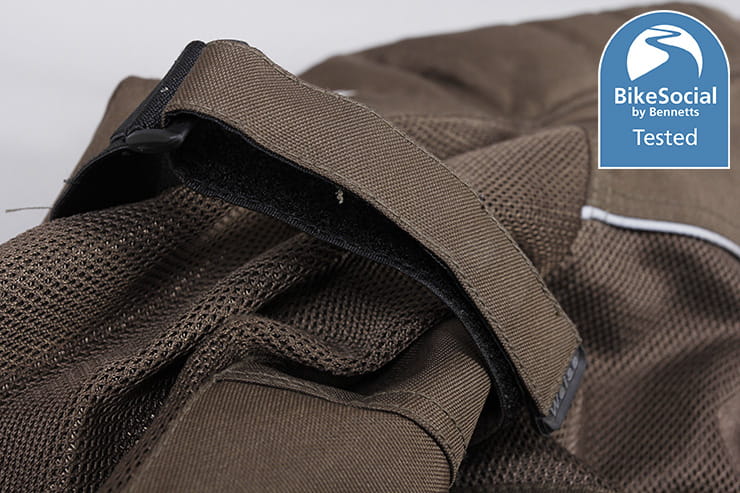 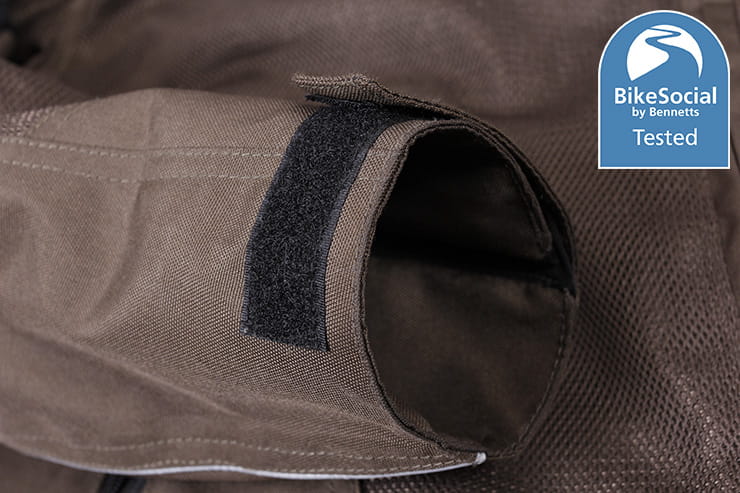 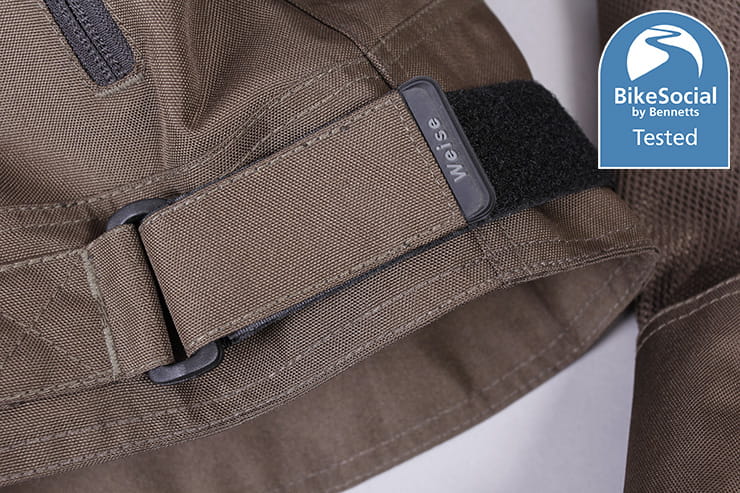 The biceps have long hook-and-loop fastened straps that allow you to tighten them up if the material’s flapping about – these are fixed at one end with a section of elastic and while they’re fine, if you have them quite tight there’s a large area of unsecured loop that can look a little untidy. Given the price, I don’t mind.

There are short ‘belt’ straps on either side of the lower waist, to get a tidy fit and the cuffs are tightened with more hook-and-loop. 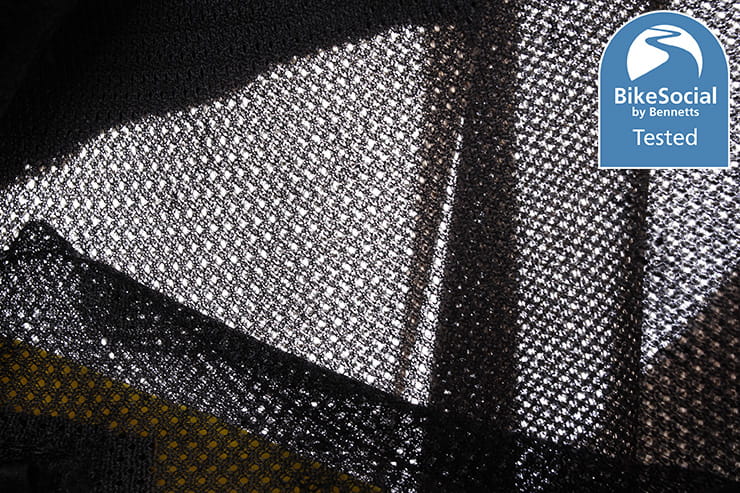 It’s a mesh jacket, so it’s basically one big vent.

The arms allow a lot of air to get up them then out the back, and while the front does have its restrictions as mentioned, it still works well. Even in very high temperatures, this is a jacket you’ll be very pleased to be wearing.

There’s no removable thermal liner supplied, so if you want to be able to get warmer, pop a rainsuit on to block the wind, or consider a wind-stopper top to go underneath. Don’t bother with a standard fleece as they’re not windproof!

Riding home the night before I wrote this at 10pm, it had been a 30+°C day, but when the temperature dropped I did feel the chill. Still, it had been worth it and I didn’t have far to go. 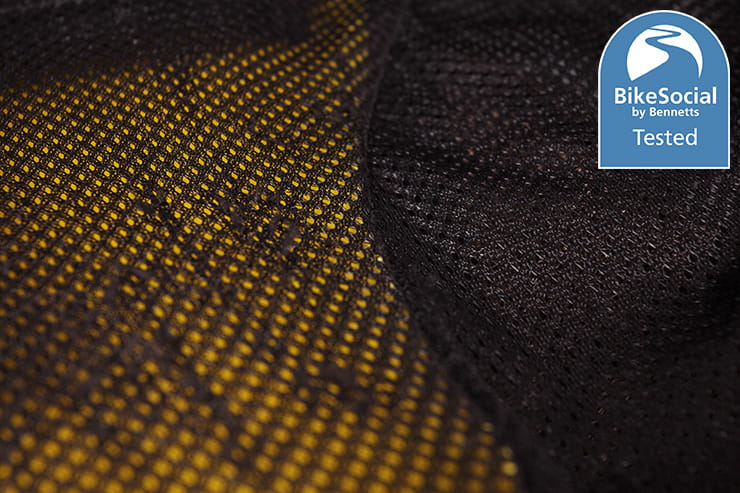 The lining is a comfortable lightweight mesh. The only way I could see this being improved – at more expense – would be to have a 3D mesh here that helps to keep the armour away from your skin, thus allowing more air through.

If you think you might get caught out in the rain, take a cheap over-suit with you. This is not designed for the rain.

Three alternatives to the Weise Scout

I’ve not used many mesh jackets, but here are considerations you might want to make…

I should also mention the Merlin Shenstone. This is more expensive than the Weise, at £199.99, but it does have a great retro style, comes with higher-quality D3O full armour, and has a removable waterproof liner. I’ve not had a chance to test any Merlin kit, so can’t recommend it at this stage, and I’d want to try it to find out how much the high pockets on the chest restrict airflow.

These are just three of many alternatives – you can find all the textile riding kit we’ve tested here. 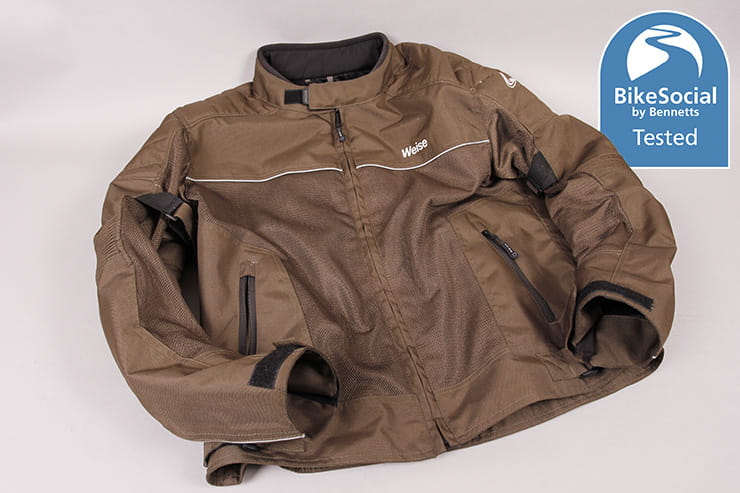 For a lot of riders in the UK, there’s little chance to really get the most out of a mesh jacket, but while there are some flaws in the Weise Scout, its price is outstanding, especially given the protection it offers, so even if you’re buying it as your second garment, I thoroughly recommend it.